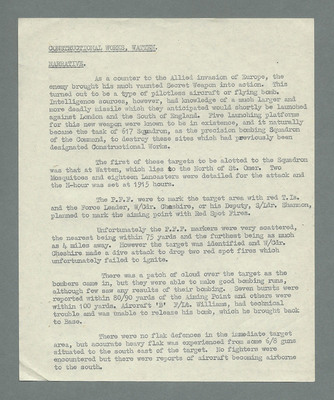 Explains that the enemy had brought much vaunted secret weapons into action including V2 missile. Five launching platforms were known to exits and 617 as a precision bombing squadron to destroy these sites. First target allotted was at Watten to the north of St Omer. Goes on to describe poor Pathfinder marking and marking attempts by Wing Commander Cheshire and Squadron Leader Shannon. Lancasters with Tallboys were able to make good bomb runs and several burst were seen in the vicinity of the aiming point. Mentions anti-aircraft fire defences.

As a counter to the Allied invasion of Europe, the enemy brought his much vaunted Secret Weapon into action. This turned out to be a type of pilotless aircraft or flying bomb. Intelligence sources, however, had knowledge of a much larger and more deadly missile which they anticipated would shortly be launched against London and the South of England. Five launching platforms for this new weapon were known to be in existence, and it naturally became the task of 617 Squadron, as the precision bombing Squadron of the Command, to destroy these sites which had previously been designated Constructional Works.

The first of these targets to be alotted [sic] to the Squadron was that at Watten, which lies to the North of St. Omer. Two Mosquitoes and eighteen Lancasters were detailed for the attack and the H-hour was set at 1915 hours.

The P.F.F. were to mark the target area with red T.Is. and the Force Leader, W/Cdr. Cheshire, or his Deputy, S/Ldr. Shannon, planned to mark the aiming point with Red Spot Fires.

Unfortunately the P.F.F. markers were very scattered, the nearest being within 75 yards and the furthest being as much as 4 miles away. However the target was identified and W/Cdr. Cheshire made a dive attack to drop two red spot fires which unfortunately failed to ignite.

There was a patch of cloud over the target as the bombers came in, but they were able to make good bombing runs, although few saw any results of their bombing. Seven bursts were reported within 80/90 yards of the Aiming Point and others were within 100 yards. Aircraft ‘B’ F/Lt. Williams, had technical trouble and was unable to release his bomb, which he brought back to Base.

There were no flak defences in the immediate target area, but accurate heavy flak was experienced from some 6/8 guns situated to the south east of the target. No fighters were encountered but there were reports of aircraft becoming airborne to the south.