How we took the good news from Grosse Tychow to Fallingbostel 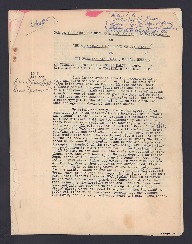 How we took the good news from Grosse Tychow to Fallingbostel
The army that didn't march on its stomach
The Russians are coming, Hurrah, Hurrah!

1945 6th Feb.
[inserted] from Stalag Luft Gross Tyschow [sic]
Camp leader crashes into the barrack at 12:30 a.m. and wakes the whole lot of us, with the news that we’re being evacuated on foot at 12 noon today. What a bloody panic! Everyone tears around and has a woof of all outstanding grub (if any). Frank thinks of nothing else but a cup of char, and on goes the jug, and we bung ion all the tea and condensed milk we’ve got. You can stand a spoon upright in the old cup! Then we all climb back into bed again to dream of what lies ahead.

19th April Lovely breakfast of real porridge and sugar and milk, fried eggs, sausages, [underlined] white [/underlined] bread and butter. Then delouse myself and my precious blanket sent from home. I’ve carried it all this way and it’s going back home on my bed. Off we go at 10a.m. back to Bienenbuttel, lose the way two or three times. From Merdack we then go to Celle. Pass German aerodromes with dozens of burnt-out aircraft on the ground. Good show, boys. Also see hordes of Russians, French and Poles making their own way back on foot mostly. But six are in a huge car, driven by four horses! Arrive Celle at 6 o’clock and meet Norman Rees in the market place and a joyful re-union takes place. Billeted in Army barracks and given a light meal. They won’t allow us to overeat. Several of the boys are in pain – their stomachs just can’t take it. Sleep on the floor of the hut, no insomnia tonight however.

20th April Up at 8 o’clock and after breakfast we queue up to be registered. The boys are coming in by the dozen now, wonder where the old column is by now. I expect they have crossed the Elbe. Draw clean clothing, army battledress, from a store and after a bath, I become a soldier. After tea we go to the cinema. The film is very old and I fall asleep, but I’m very happy. Canteen issues cigarettes, chewing gum, matches and a cigar, all buskshee. Still no money! Geoff Reeves and Don Godard roll in tonight. They’ve been hiding in a wood box. The Tommies thought Don was with a girl-friend. Geoff’s hair is so long these days! Complete diary by candlelight. Almost finished it now, thank God!

21st April Up rather early and we are soon off on another stage of the journey home. After breakfast we pile into lorries and the convey moves off in a rainstorm. Arrive at Nienburg at about 2 o’clock, this place being N.W. of Hanover and only 20 miles from Fallingbostel. Billeted, and given a meal of stew and rice pudding. Meet a fellow from Oxford and have a drop of rum with him and a long talk about home. Promise to visit his people and take a message back for him. He gives me two souvenirs of Holland, a couple of silk scarves. Hang around the rest of the day – very impatient. Write to Mum and Doris and then bed.

22nd April The rich food that we’ve been having these last few days has upset me with a vengeance, and I’ll have to lie low. To-day for instance Jack and I woofed a 2 lb. fruit pudding each with cream on top and then went down to dinner and knocked back Irish stew and peaches and cream! It’s difficult to turn away from the good food, but I’d rather not have that deadly dysentery again.
[page break]
-27-
22nd April Many of the chaps have been very ill through over-eating. May leave for England tomorrow. Prowl around the German stores again looking for anything worth having, then into bad. Tomorrow night should see us in England once more.

23rd April Nothing happens all day, so Jack and I go to the cinema at 6:30 and see some news reels, and Mickey Mous e[sic]. Half-way through the picture some bloke comes in and yells, “P’s. O.W. outside.” You never saw such a rus h[sic]. Everybody dead scared the trucks will leave without them. We don’t move off for two hours so into the Q.M.’s office and we sample some red wine looted from France. Feel half tight but very, very happy. Leave at 10 p.m. in the trucks. Very uncomfortable, almost as bad as the cattle truck but we’re all very cheerful.

24th April We ride all night and one truck crashes into a tree, killing the driver and seriously injuring several of the P’s.O.W. Wake up with a s tiff[sic] neck, sore all over. We’re at Borghorst, and we raid a milk lorry outside the dairy. Billeted in the town for five hours and I have a good long sleep. Charge into a German house, and have a feed, wash and a shave. The Huns didn’t murmur. Leave at 2 o’clock for Rheine airport and drive right up to the aircraft. Separated from Jack for the second time. See you in Blighty, Jack. We’re soon airborne and on the last stage for home. Soon we leave Germany behind, over Belgium and France, the Channel and then the white cliffs of Dover. There are a few lumps in the boys’ throats a s[sic] they gaze at them. Pass along the coast to Dungeness and across to Guildford and we land at Dunsfeld [sic], at 6:30 p.m. I’m first out the kite and a W.A.A.F. rushes up to kiss me. That was worth all the two years. Even S.P.’s come up and greet us. One bloke, a P.O.W. for over five years, sits on the grass and weeps unashamedly. The welcome bowls us over. The good old Red Cross is there in force, the hangar is hung with flags and a huge “WELCOME HOME” sign fluttering from the roof. A wizard tea, 2 pounds advance pa y[sic], a rest and off we go to London. The money jingles merrily in our pockets. All the W.A.A.F.’s follow the truck on their bicycles, what a glamorous guard of honour! Leave Guildford and arrive London at 9:30 where we mob the first policeman we see. He doesn’t quite know what’s happening. Off to a hotel at Eufton, beds all made for us, new pyjamas, a bag of good things from the Red Cross and a final message from them. The message reads “We salute you and wish you the best of luck.” I rather think we should salute [underlined] them [/underlined], without their wonderful help we wouldn’t be here to enjoy the welcome. A bath, a real bath, and I laze in the luxury of it for nearly two hours. Jump out as weak as a rat but really clean this time. This is sheer heaven.

25th April Off at 10 a.m. for Paddington and we’re in Cosford by 12:30 p.m. the reception centre. Another terrific welcome, re-kitted with new uniforms, interrogated by Intelligence wallahs and more gifts from the R.A.F. and the Red Cross. Organization superb and we remain here till 9 a.m. next day.
[page break]
-28-
26th April Now we’re really on the way. Arrive Oxford at 1 p.m. and on the local bus at 2:15 p.m. I queued up for one hour, no need to do so, but I’m not missing this one. Sent a wire to Mum. Arrive home at 3 p.m. and there is Mum waiting for me. The great moment has arrived, even more wonderful then I expected. No words can describe my feelings. I think I’ll leave the Diary just there.
I’m happy, what more can I ask?

C A Room, “How we took the good news from Grosse Tychow to Fallingbostel,” IBCC Digital Archive, accessed May 17, 2022, https://ibccdigitalarchive.lincoln.ac.uk/omeka/collections/document/16396.