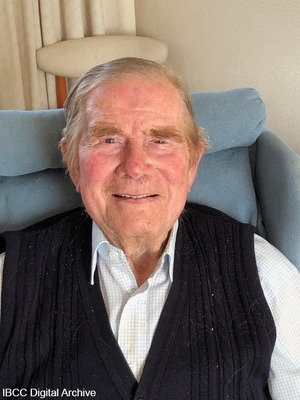 Cyril Henry Bridges was born in Ramsgate and served as a flight engineer in the RAF. He tells of his father, a deep-sea fisherman, who fought in the First World War and later helped evacuate troops from Dunkirk. Remembers his early life, taking on different jobs, as a butcher’s boy and working in a shop, to help his mother. After initially wanting to join the navy, he joined the RAF and trained at Penarth and Blackpool. After further training, he was posted to 115 Squadron. Remembers flying an operation to Schweinfurt as a spare flight engineer. Explains his role and duties as a flight engineer before take-off and landing and during operations and vividly describes the circumstances under which they were flying. After the war, he worked for a company making rubber mouldings and electronic accessories.