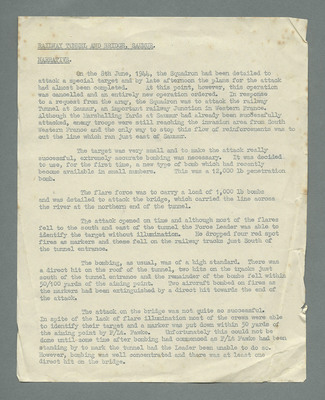 Relates that in response to request from the Army a planned operation was cancelled at late notice and replaced by operation against the railway tunnel at Saumur. As accurate bombing was required it was decided to use the recently available 12,000 pound penetration bomb. Flare force was to carry 1000 pound bombs and attack bridge. Leader identified target and dropped red spot flares. Notes direct hit on the roof of the tunnel and others close by. The attack on the bridge was less successful.

On the 8th June, 1944, the squadron had been detailed to attack a special target and by late afternoon the plans for the attack had almost been completed. At this point, however, this operation was cancelled and an entirely new operation ordered. In response to a request from the army, the squadron was to attack the railway Tunnel at Saumur, an important railway junction in Western France. Although the Marshalling Yards at Saumur had already been successfully attacked, enemy troops were still reaching the invasion area from South Western France and the only way to stop this flow of reinforcements was to cut the line which ran just east of Saumur.
The target was very small and to make the attack really successful, extremely accurate bombing was necessary. It was decided to use, for the first time, a new type of bomb which had recently become available in small numbers. This was the 12,000 lb penetration bomb.
The flare force was to carry a load of 1,000 lb bombs and was detailed to attack the bridge, which carried the line across the river at the northern end of the tunnel.
The attack opened on time and although most of the flares fell to the south and east of the tunnel the Force Leader was able to identify the target without illumination. He dropped four red spot fires as markers and these fell on the railway tracks just South of the tunnel entrance.
The bombing, as usual, was of a high standard. There was a direct hit on the roof of the tunnel, two hits on the tracks just south of the tunnel entrance and the remainder of the bombs fell within 50/100 yards of the aiming point. Two aircraft bombed on the fires as the markers had been extinguished by a direct hit toward the end of the attack.
The attack on the bridge was not quite so successful. In spite of the lack of flare illumination most of crews were able to identify their target and a marker was put down within 50 yards of the aiming point by F/Lt. Fawke. Unfortunately this could not be done until some time after the bombing had commenced as F/Lt Fawke had been standing by to mark the tunnel had the Leader been unable to do so. However, bombing was well concentrated and there was at least one direct hit on the bridge.