21 items. The collection includes an oral history interview with Gordon Atkinson, letters from Canada and a Canadian soldier, and photographs.

The collection has been loaned to the IBCC Digital Archive for digitisation by Gordon Atkinson and catalogued by Barry Hunter.

Soldier, two women, man, girl and boy. They are standing in a garden of a brick house, captioned 'Taken at Farthing Ave Hughie (Canada)'.

Man with dog and shotgun 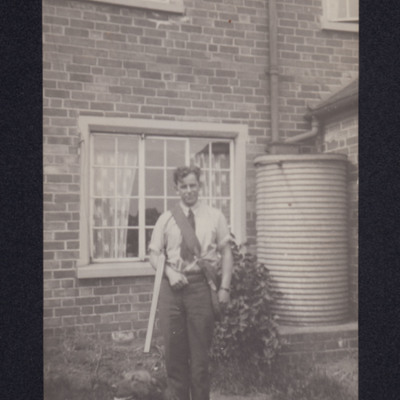 A man standing in a garden of brick house with a shotgun and a dog. On the reverse 'Leslie (Canada) lost in RAF'.

Airman in a garden 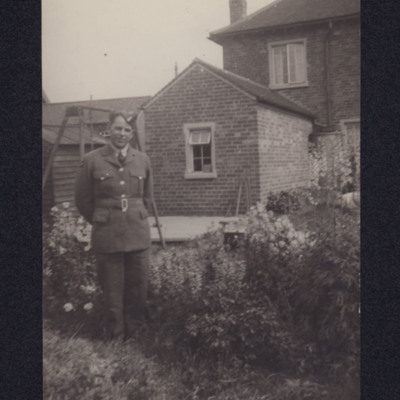 An airman standing in a garden with two storey brick house and swing behind. On the reverse 'Leslie Canada lost in R.A.F.'

One soldier, older man and woman, a younger man holding a boy and a girl standing in a garden, with a brick house behind. On the reverse 'Farthing Ave Hughie (Canada)'. 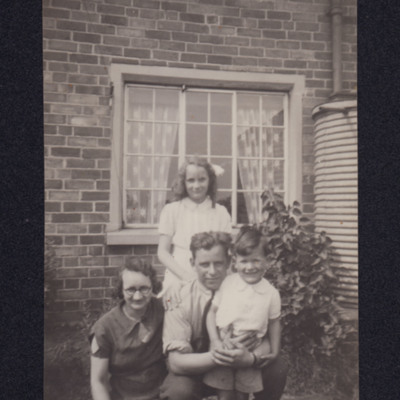 A group of a man, women, boy and girl in garden beside a brick house. On the reverse 'Lesley (Canada) Lost in R.A.F.'

Airman in a garden 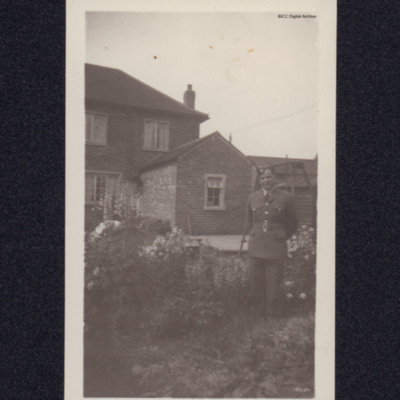 An airman standing in a garden with two storey house behind. 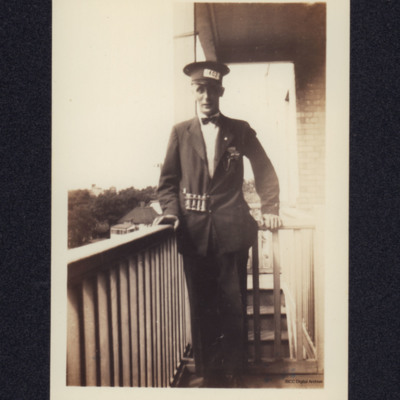 A man standing at a railing on a balcony. He is dressed as a bus conductor, with ticket machine and flat hat. On the reverse 'my hubby' and 'Johnny (Jessies Husband)'. 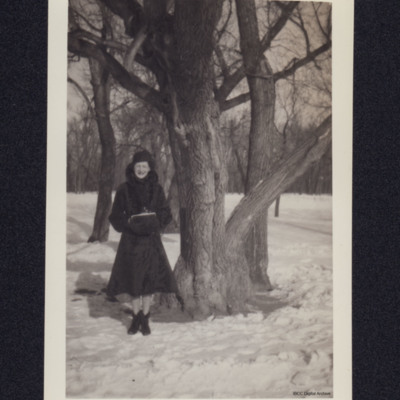 A woman wearing a fur coat and hat standing by a tree and holding her handbag. The ground is snow covered. On the reverse 'Jessie Canada'. 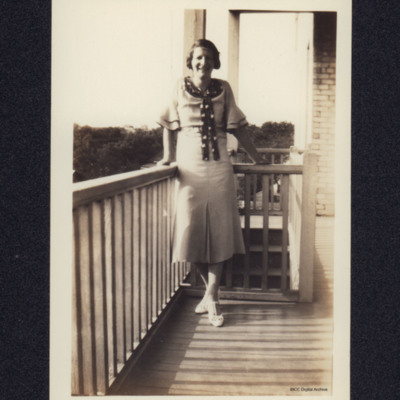 A woman in a short-sleeved dress and scarf standing at the railing of a porch or balcony. On the reverse 'Jessie (Canada)' and 'me'. 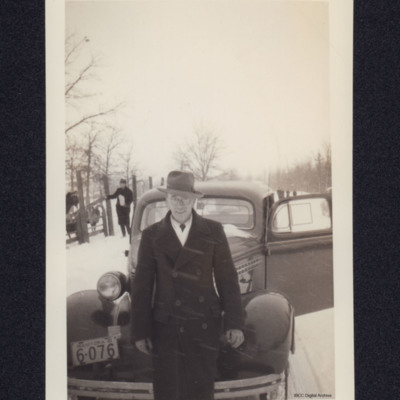 A man in a coat and hat standing in front of a car with a Manitoba 41 licence plate, amongst the snow. Man in background feeling animals. On the reverse 'Johnny Canada Jessie's Husband'. 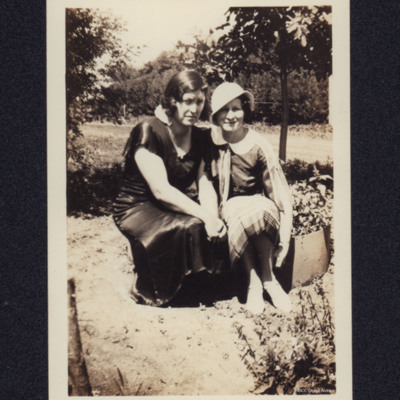 Two women sitting in a garden. On the reverse 'Jessie (Canada)' and 'me with the white hat'.

Man and girl on the beach 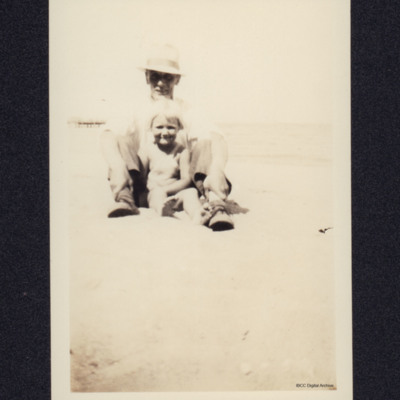 A man wearing a hat and sunglasses with a young girl, sitting on a beach. On the reverse 'my hubby and Eva little girl'. 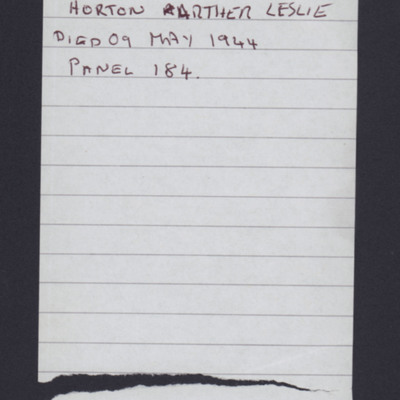 A handwritten note with 'Horton Arther [sic] Leslie Died 09 May 1944 Panel 184'. This refers to the IBCC memorial panels where Arthur's name is displayed. 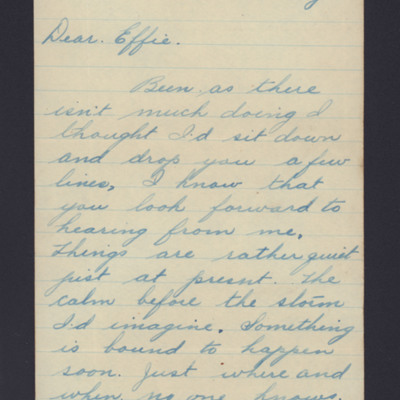 He tells Effie that things are quiet but will get busier. He hopes to be able to visit her when he gets leave, but doesn't expect this until at least May. Sends his regards to Doug and the 'kiddies' - hopes to have a pint with Doug sometime. 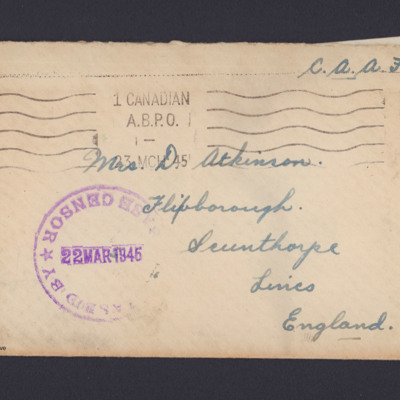 An envelope addressed to Mrs D Atkinson, Flixborough from Gunner Horton, CAAF. Inside is a letter to Effie from Hugh. He thanks her for her letter and parcel. He is in Germany and closer to Berlin than 'any of the rest'. He expects that the Russians… 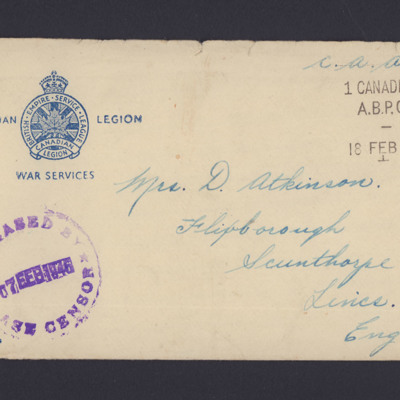 The envelope is addressed to Mrs D Atkinson, Flipborough [sic], Scunthorpe, Lincs, England. Envelope printed with 'Canadian Legion War Services' and CAAF. Reverse of envelope '4.12167 Gnr Horton, H R'. Inside is a letter to Effie from Hugh. He…

An envelope addressed to Mrs D Atkinson, Flipborough [sic], Scunthorpe, Lincs from 4.12167 Gnr Horton H R. Envelope marked 'passed by censor' and CAAF. Inside is a letter to Effie thanking her for cans of sugar and milk, but asking for saccharine…

Letter to Effie from Jessie 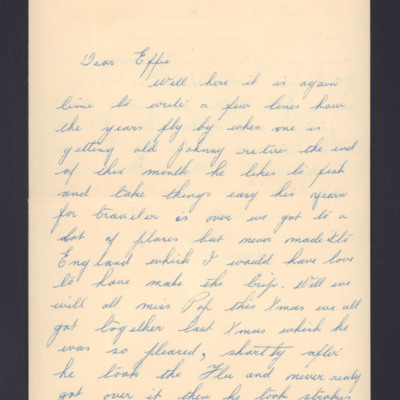 A letter between two women with domestic news. 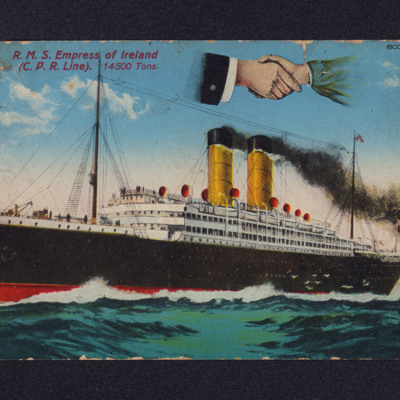 A postcard of a liner addressed to Mrs Barratt, 209 Frodingham Road, Crosby, Scunthorpe. The handwritten message is to 'Cis'. from Flo, postmark Liverpool. Also a note stating that the liner later sank on its return journey from Canada with the loss… 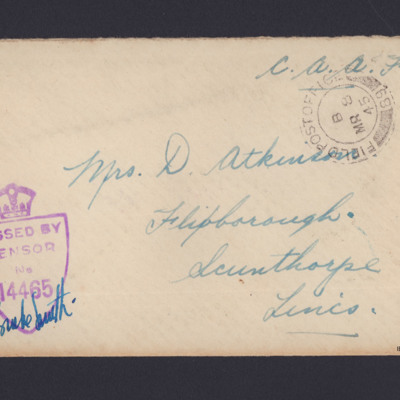 Gordon Atkinson lived in Flixborough, Lincolnshire. As a young boy he recalls seeing aircraft gathering over the River Humber in the evenings ready to fly out on bombing operations. In the morning he watched them come back, some with bits dropping…
View all 21 items