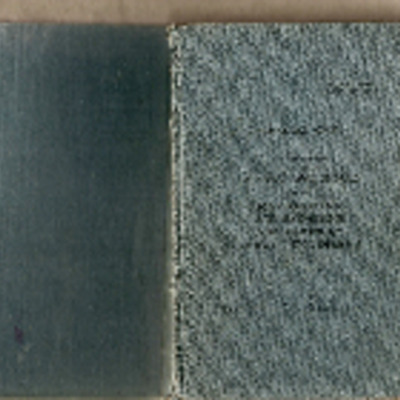 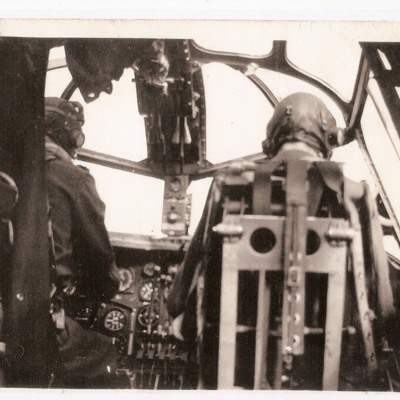 Two airmen in the cockpit of an aircraft.
Additional information supplied with collection: 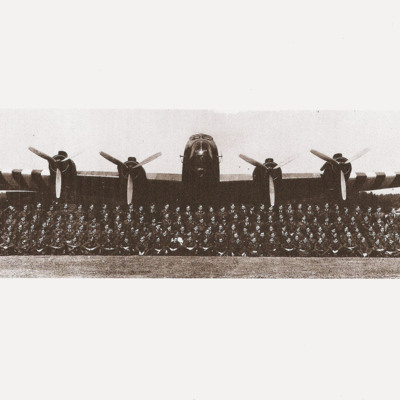 A large group of airmen arranged in four rows in front of a Stirling. Information supplied with collection:

Black and white landscape photograph of 620 squadron at Fairford taken in front of a Short Stirling Mk4, K Watson is in the front row 8th…

K Watson Mentioned in a Despatch for distinguished service 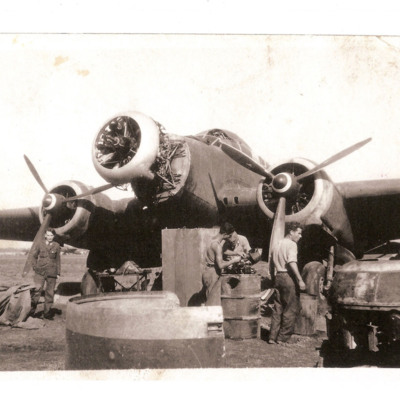 Four airmen working at the front of a JU 52.
On the reverse 'Fl Sgt Watson was detained by transportation difficulties. Lt John F [indecipherable]uish'. 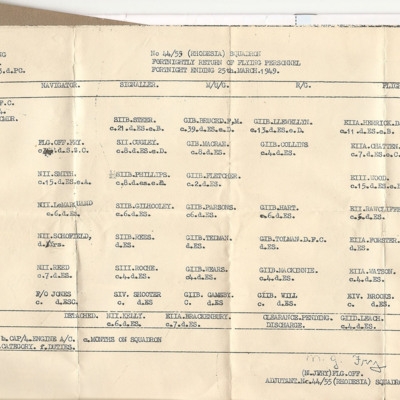 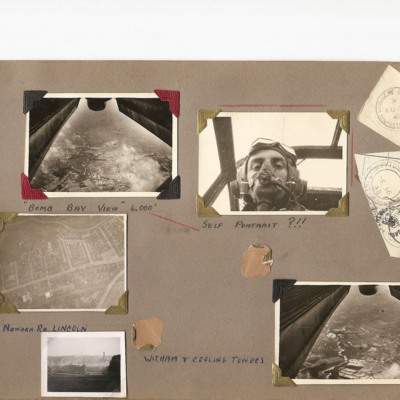 Five photographs on an album page.

Photo 1 and 5 are views under the aircraft. Photo 1 is captioned 'Bomb bay view 4000' .
Photo 2 is K Watson in flying helmet and oxygen mask, captioned 'Self portrait ?!!'.
Photo 3 is a vertical photo… 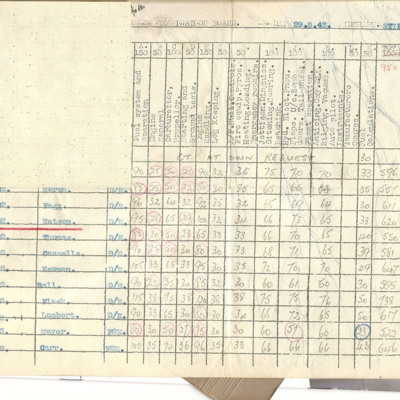 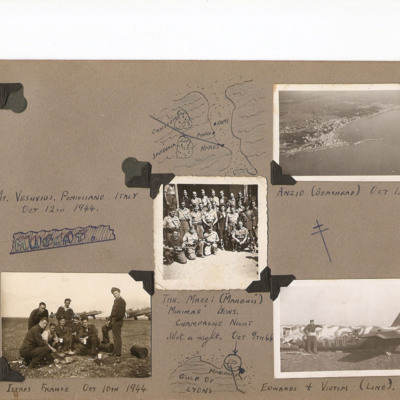 Four photographs and two sketch maps on an album page.

Photo 1 is an aerial view of the beachhead at Anzio, dated Oct 12th 1944.
Sketch map 1 is a route across Sardinia and Corsica to Naples with Anzio and Rome marked.
Photo 2 is a group of men…

Five items on an album page. 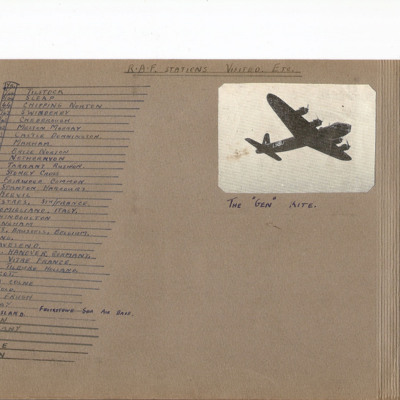 A list of the RAF Stations on an album page that K Watson visited with dates. Included is a photo of a flying Stirling LS-J captioned 'The "Gen" Kite'. 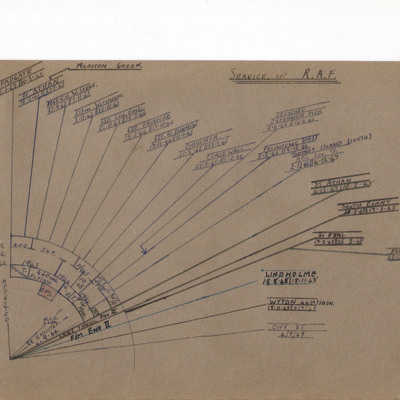 A hand-drawn graphic on an album page with K Watson's RAF Service detailed. It includes the dates and where he served. 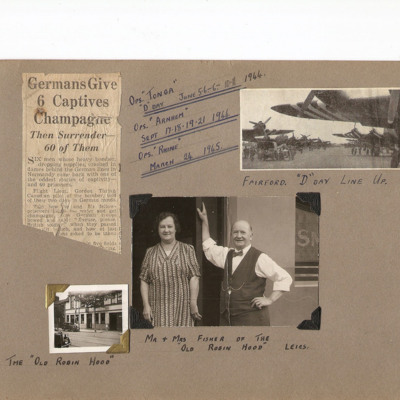 Five items on an album page.

Item 1 is a newspaper cutting about Germans giving an aircrew champagne, then surrendering.
Item 2 is a handwritten list of three operations and their dates.
Item 3 is a photograph of a number of Stirlings… 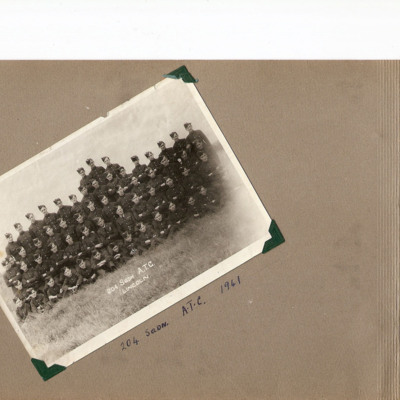 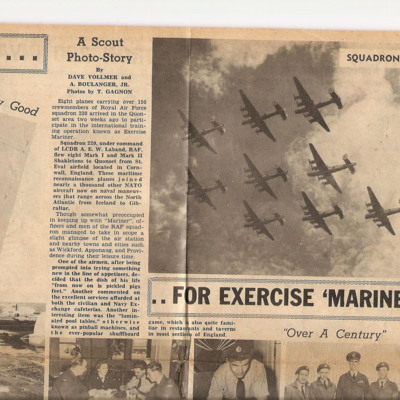 A cutting with details about 220 Squadron's involvement in Exercise Mariner. Includes airmen's reactions to food and entertainment at base.

Odiham Flypast and sketch of route to Florida 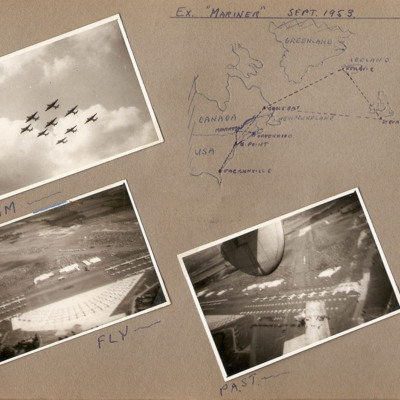 Four items on an album page.

Item 1 is a photo of nine Shackleons flying in formation.
Item 2 is a sketch map of a route from St Eval, Reykjavik, Goose Bay, Q Point, Jacksonville, Montreal, Greenwood then returning to St Eval. Titled 'Ex.… 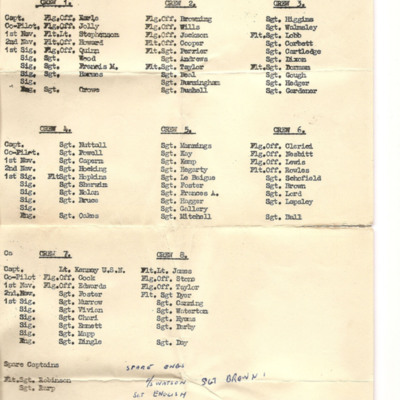 A list of the crew members making up the eight aircraft due to fly. Annotated in handwriting at the bottom are spare personnel. 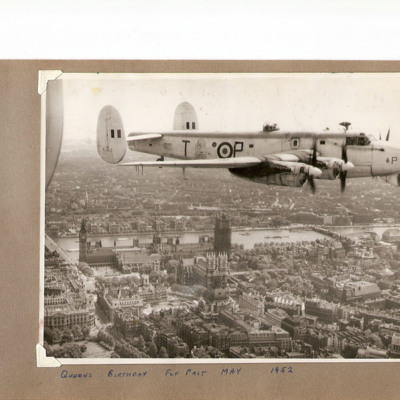 Shackleton VP257 flying over the Houses of Parliament, captioned 'Queens Birthday Fly Past May 1952'. 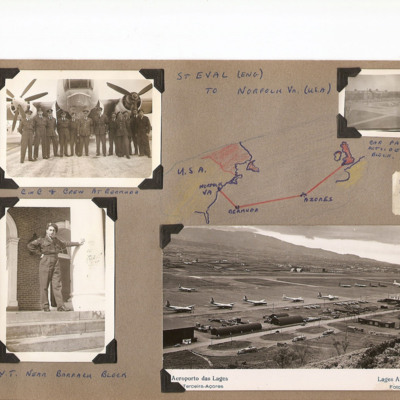 Six items on an album page.

Item 1 is a photo of a group of 12 airmen in front of a Shackleton, captioned 'C in C & Crew at Bermuda'.
Item 2 is a sketch map of the route from St Eval, Azores, Bermuda to Norfolk (Va).
Item 3 is a photo of a car… 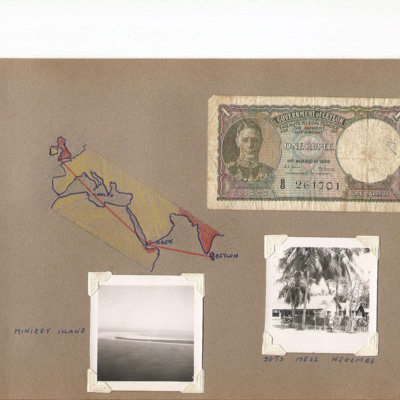 Four items on an album page.
Item 1 is a sketch map of the route from UK via Malta and Aden to Ceylon.
Item 2 is One rupee note issued by the Government of Ceylon.
Item 3 is a low level aerial photograph of Minicoy Island.
Item 4 is a photograph… 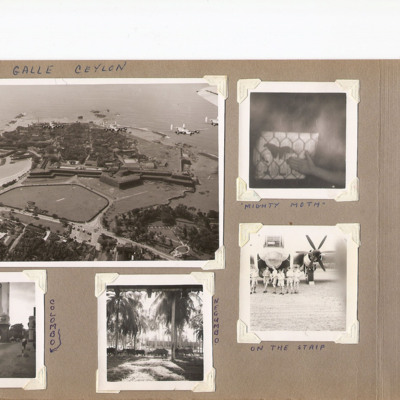 Five photographs on an album page.

Photo 1 is a low oblique of Galle Fort with four Shackletons.
Photo 2 is a large moth at a window, captioned 'Mighty Moth'.
Photo 3 is a street scene captioned 'Colombo'.
Photo 4 is of oxen under palm trees,… 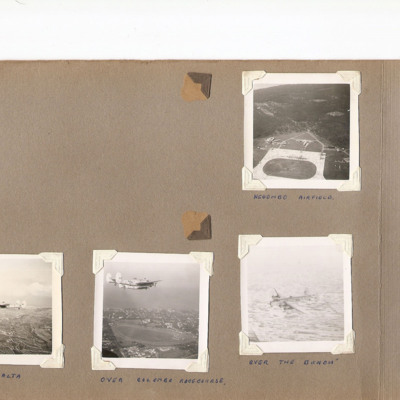 Four photographs on an album page: 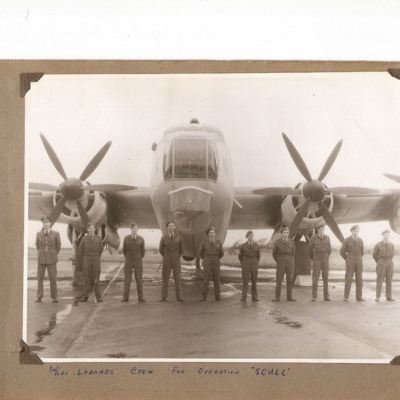 One photograph on an album page captioned 'Sq/Ldr Labands Crew for Operation 'Scull', showing ten airmen lined up in front of a Shackleton. 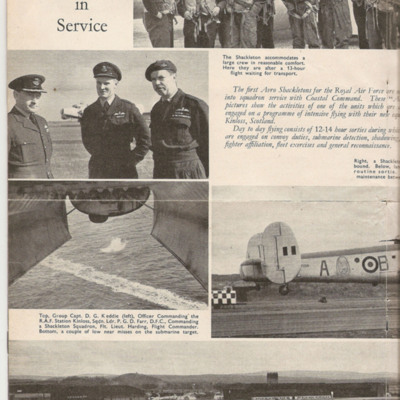 Two pages from The Aeroplane magazine with details of the arrival of Shackletons in squadron service at RAF Kinloss. There are seven images of Shackletons (in flight an on the ground) and aircrew with a brief description of the aircraft's duties.
View all 34 items