334 items. The collection concerns Flight Sergeant David Adrian Boldy (1918 – 1942, 923995 Royal Air Force) and consists of his school reports, letters from school and photographs of family and locations in India, letters from training and service, and photographs from his social life and time training. It also includes newspaper cuttings and letters about him being missing in action. David Boldy was born and attended school in India and studied law at Kings College London. He volunteered for the Royal Air Force and trained as an air gunner in South Africa. He flew operations in Manchesters and Lancasters with 207 Squadron from RAF Bottesford. His aircraft failed to return from an operation to Gdańsk 11 July 1942.

Additional information on David Boldy is available via the IBCC Losses Database. 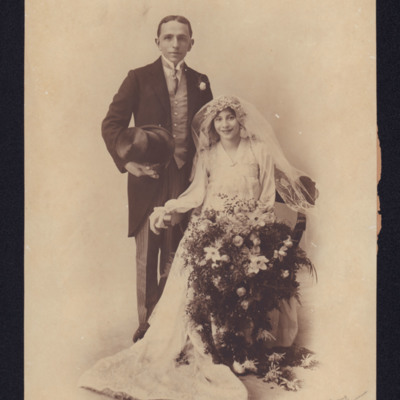 Picture 1. A man standing on the left wearing morning dress and holding top hat. On the right seated a woman in wedding dress and bouquet. Picture 2. The same couple with positions reversed. 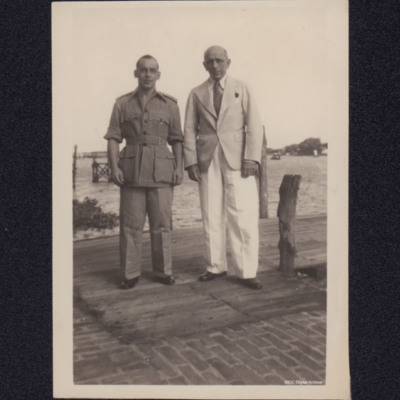 On the left a man in uniform and on the right a man wearing jacket and tie. They are standing on a wooden dock with water in the background.

Man standing behind a desk reading a document 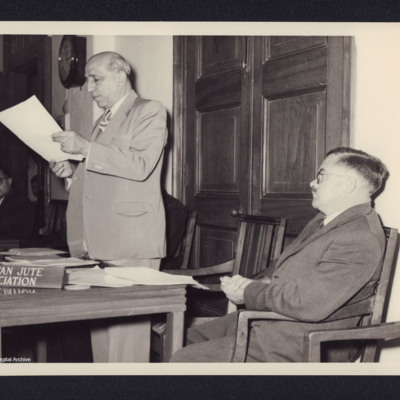 A man wearing light suit and tie standing behind a desk looking at a document. To the right a man wearing suit seated. On the left a man in spectacles seated. On the desk a sign '[..]kistan Jute Association'. In the background a wooden double door.

A man and three woman at a party 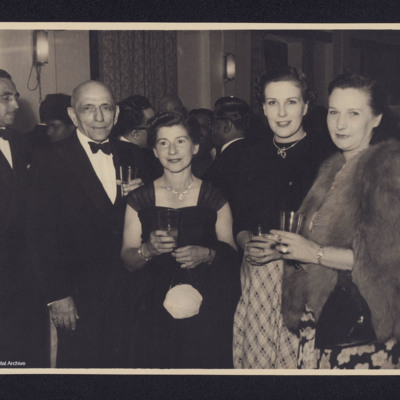 A group standing in a ballroom. A man wearing dinner jacket and bow tie standing on the left with three women in formal dresses on the right. The women on the right is wearing a fur stole. In the background other people. On the reverse 'Dacca Club'.. 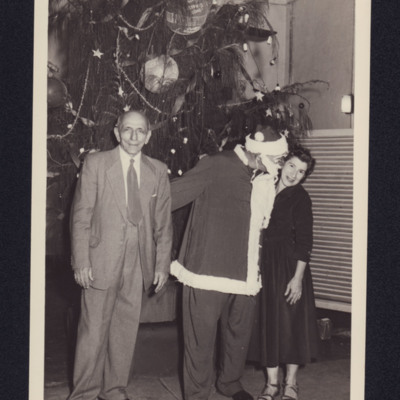 On the left a man standing wearing a light suit and tie and on the right a woman wearing a dark dress. Between them and kissing the woman is a man in father Christmas outfit. In the background a large decorated Christmas tree. On the reverse 'Xmas at…

Man and woman standing in a garden 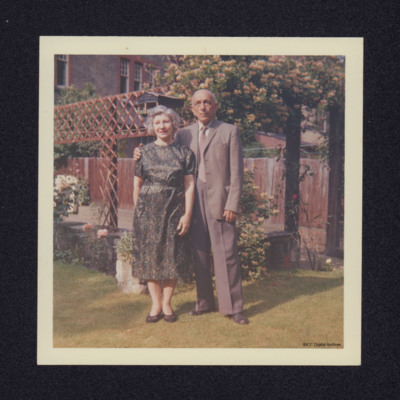 On the left a woman in a dress. On the right a man in grey suit and tie with his arm round the woman. behind them left a trellis and right a tree. In the background a house. On the reverse 'Grandma and Grandpa, Streatham ?1964-66?'.

Three men and a woman in Marseille 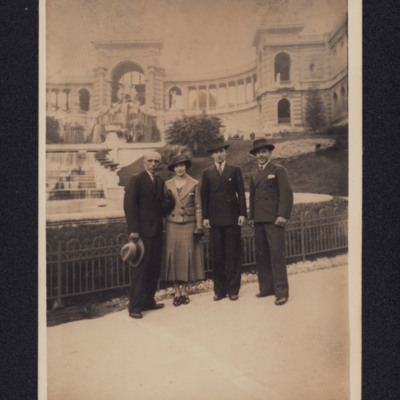 Three men wearing dark suits and ties standing with a woman wearing suit with skirt. Two men are wearing hats with the other one holding his hat. Palais Longchamp is in the background, with curved rows of column either side.

Man and woman standing in garden 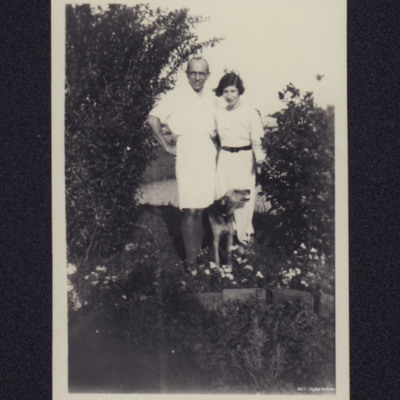 A man in white shirt and shorts and a woman in white dress standing in a garden with bushes either side. Between them a dog. On the reverse 'Don the airdale [sic] at Ashugonj'.

Group of adults and children sitting in woods 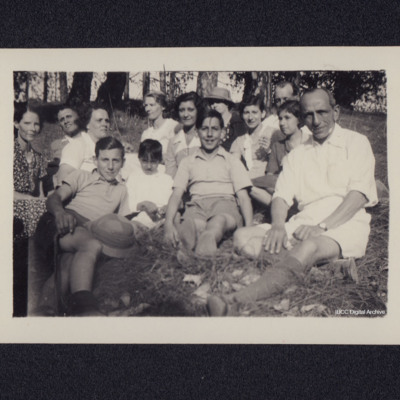 Group of thirteen consisting men, women, boys and girls all sitting with trees in the background.

Group of men, women and children sitting on a bank 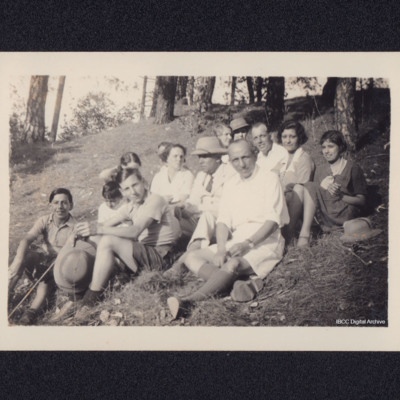 A group containing men and boys in shorts with women and girls all sitting together on a grass bank with trees in the background. One man in the centre is wearing a topee. 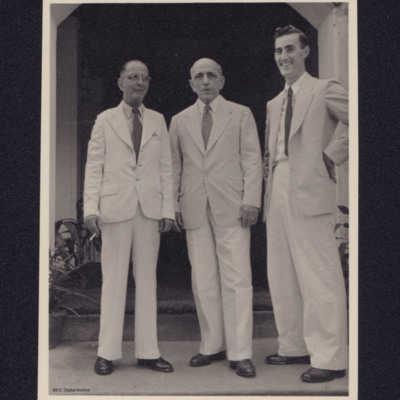 Three men wearing light suits and ties standing in line in a doorway. The man on the left wears glasses and is holding a cigarette. On the reverse 'Dad, Phil his assistant'.

Two boys and a girl standing in garden 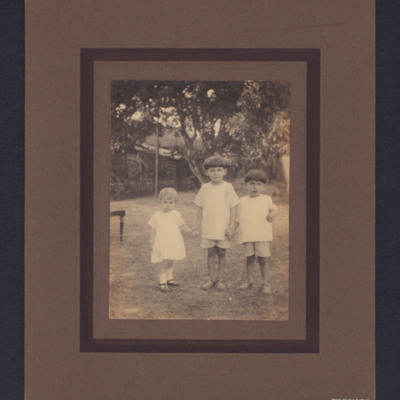 In the centre and on right two boys in white shirts and shorts. On the left a young girl in white dress. All standing on a lawn with trees in the background. On the reverse 'David, Steve, ? Marjory Wood'. 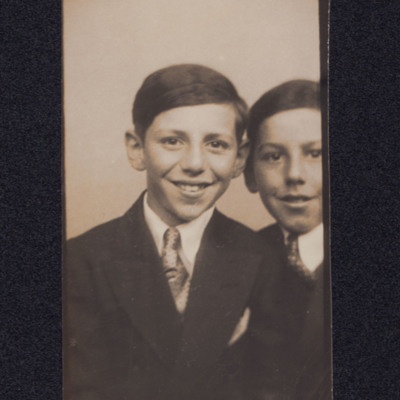 Head and shoulders portrait of two boys in jacket and tie. One in centre and the other partial obscured on the right, 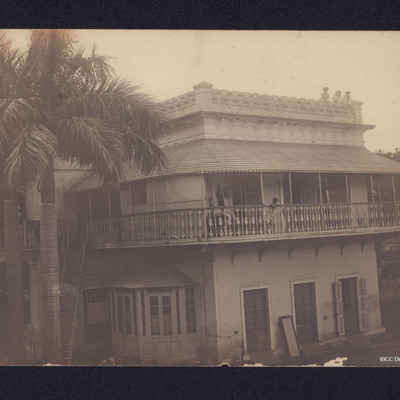 Two story house with three doors and a veranda on second floor with a figure visible in the centre.. Ornate balustrade on roof with three figures visible on roof at right end. On the left a palm tree. On the reverse 'Our house No 6 Wood Street,… 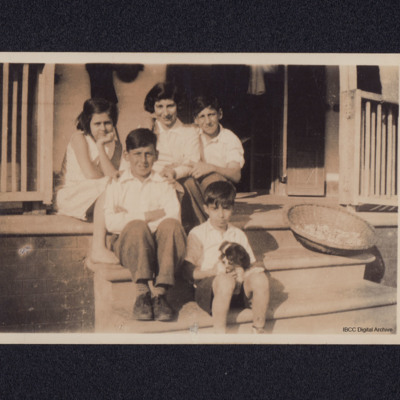 A woman sitting on top step with a girl on the left and boy on the right. In front on a lower step another boy in shirt and long trousers. On the next lower step and boy in short trousers holding a dog on his lap. In the background a door to a house.

A man and woman with two children 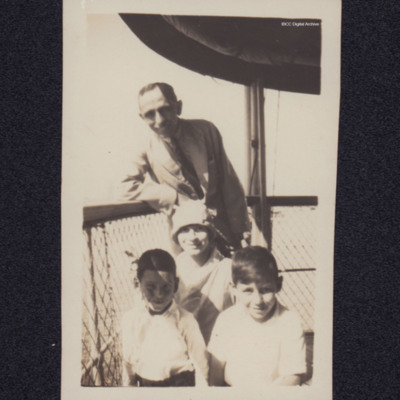 In the background a man wearing suit and tie stands leaning on a ship's rail. In front of him a woman wearing a hat. In the foreground two boys. On the reverse 'Nov 1927'. 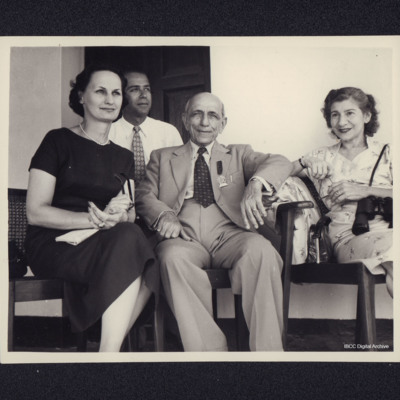 A man wearing suit and tie sitting between two women wearing dresses. The woman on the right has binoculars around neck. In the background a man in shirt and tie with door behind him. On the reverse 'Dacca Club'. 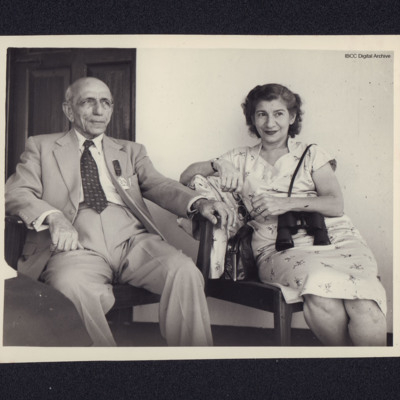 A man wearing suit and tie sitting on the left and a woman wearing dress with binoculars round neck seated on the right. On the reverse 'Dacca Club' 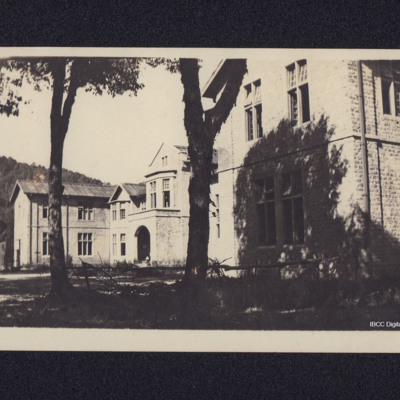 Two story brick school building with central entrance and wings either side. In the foreground trees, background right a hill. On the reverse 'All Saint's College Naini Tal'. 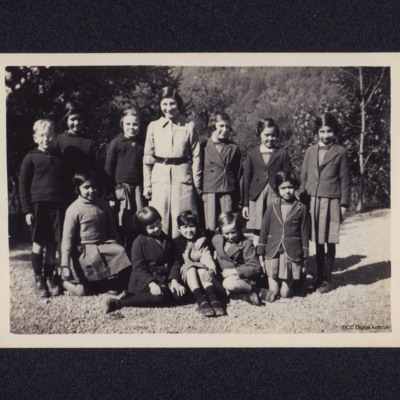 Eleven children, five sitting in front and three standing either side of an adult female. In the background trees. On the reverse 'Mum teaching at Naini Tal'. 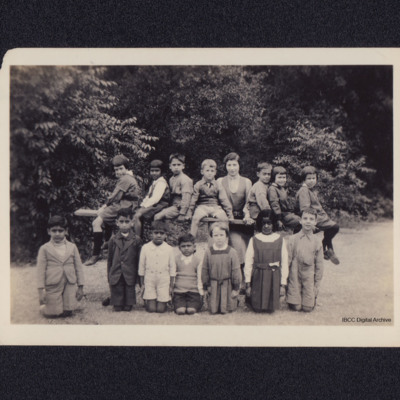 Fourteen children, seven kneeling in front with the remainder sitting behind with an adult forth from the right. One the reverse 'Mum teaching at All Saints college, Naini Tal 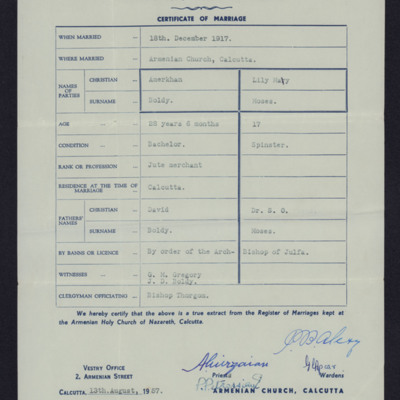 Extract from register of marriage for Amerkhan Boldy and Lily Moses at the Armenian Holy Church of Nazarethin Calcutta on 18 December 1917.

Letter from L Boldy to her husband and son Steve 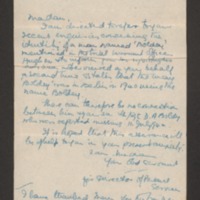 L Boldy writes to her husband and son Steve; she has transcribed the letter she received from the Director at the Air Ministry and included copies of newspaper cuttings concerning the trial of Warrant Officer Raymond David Hughes, in the hope of…

Letter from L Boldy to the Adjutant at RAF Depot Uxbridge 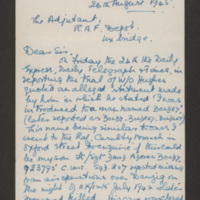 Letter from David Boldy’s mother to the Adjutant at RAF Depot, Uxbridge regarding articles in newspapers about a man on trial who mentions a man with a similar name to her son.

Letter from David Boldy to his mother 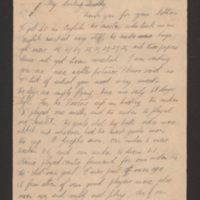 Letter from David Boldy to his mother with general conversation about life at St. Paul's school in Darjeeling. He writes about his marks in English and the marks of the other boys, the Rectors hockey match played by the under 11’s and the under…
View all 333 items