17 items. An oral history interview with Allan Coller (1924, 1874018 Royal Air Force). Also a number of other items associated with the Air Cadets and his service in Sri Lanka and India including a scrapbook of photographs.

The collection has been licenced to the IBCC Digital Archive by Allan Coller and catalogued by Barry Hunter.

Alan Coller joined the Air Training Corp in 1941 and eventually joined the Royal Air Force in 1943 at the age of 18. He was sent to RAF Skegness for his initial training, after that he was transferred to RAF Barnham, near Mildenhall where he was… 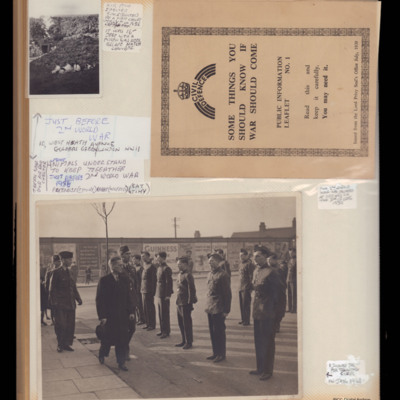 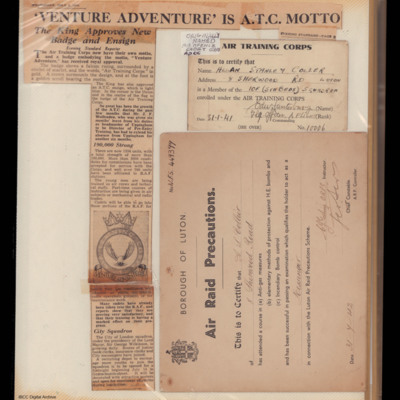 Three items from a scrapbook:

Item 2 is an Air Training Corps membership card for AS Coller. It has a caption 'Originally named Air Defence Cadet Corps ADCC'. 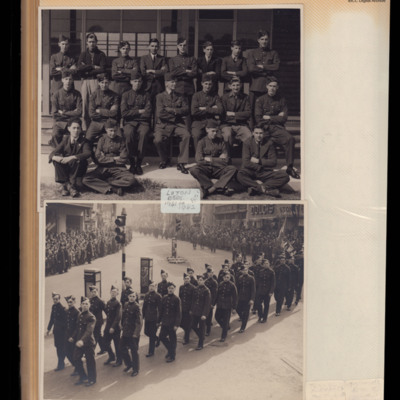 Photograph 1 - 18 cadets plus instructor arranged in three rows with arms crossed.
Photograph 2 - a group of cadets marching with eyes left, in a town street. There… 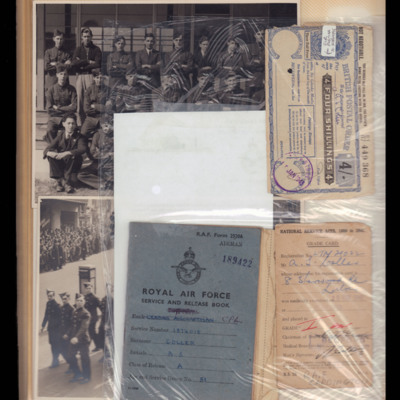 Page 3 from the scrapbook with three items on top, AS Coller's Service and Release Book, a 4/- postal order payable to AS Coller and his grade card. 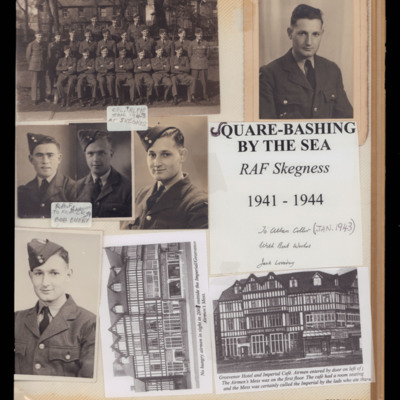 Eight photographs on a page of a scrapbook.
Photograph 1 - a group of 20 trainee airmen arranged in three rows. Behind are two large houses. and trees. It is captioned 'Cpl Alfie Jan 1943 at Skegness'.
Photograph 2 - AS Coller, half length portrait… 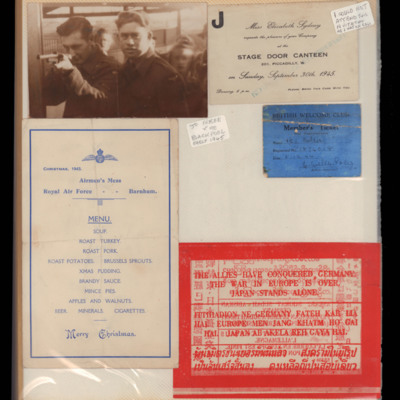 Five items from a scrapbook.
Item 1 - photograph of two men at a fairground, one with an air rifle. It is captioned' Jo Fraser & Me Blackpool, early 1945'.
Item 2 - an invitation to the Stage Door Canteen, 30th September 1945. It is captioned 'I… 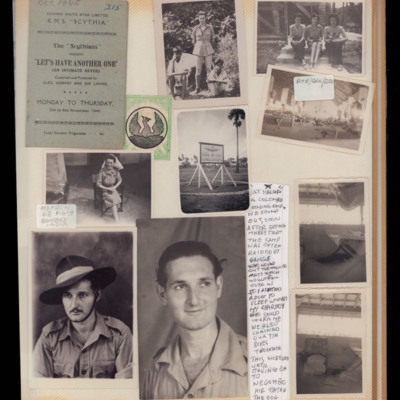 11 items on a page of a scrapbook.
Item 1 - programme for a revue 'Let's Have Another One' taking place on RMS Scythia on 5-8 November 1945.
Item 2 - photograph of A C Coller in tropical uniform standing beside two local boys who are sitting on… 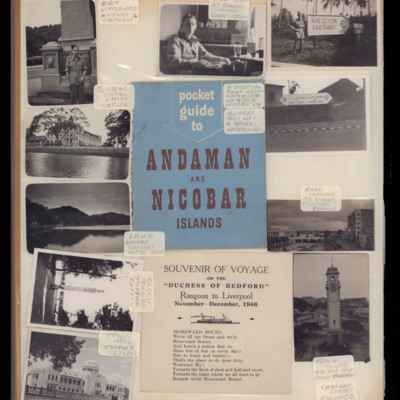 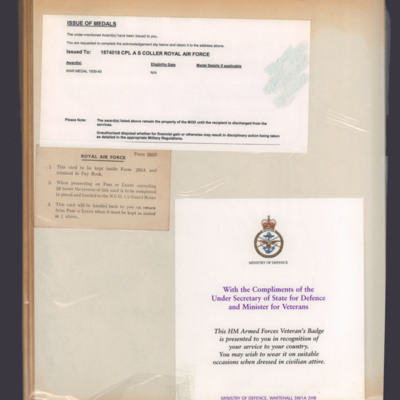 Allan Coller and his bride 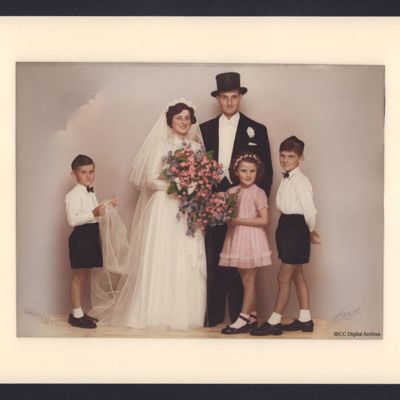 Colourised photograph from Allan Coller’s wedding, dated 1952. The photograph shows Allan Coller in a top hat and formal wear standing next to a woman in a bride’s dress, surrounded by three children, two male, one female. 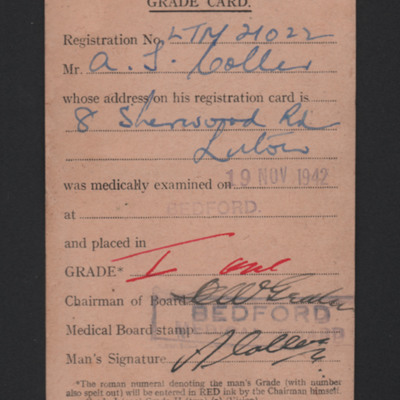 Grade Card issued to AS Coller after a medical examination at RAF Cardington. 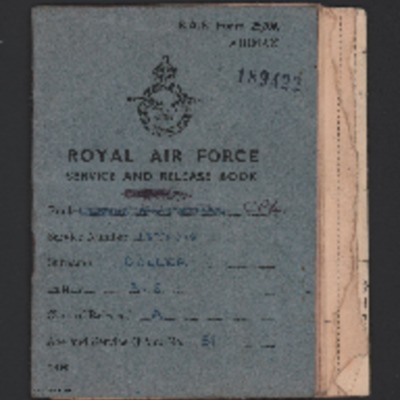 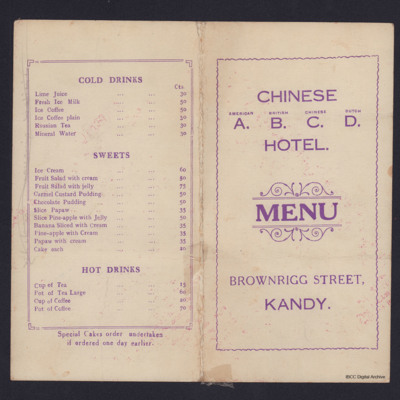 A menu for the Chinese ABCD (American, British, Chinese, Dutch) Hotel. A selection of English and Chinese dishes with drinks and sweets. 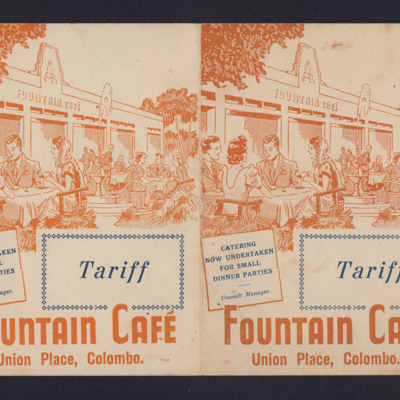 A menu for a Cafe in Colombo, Ceylon 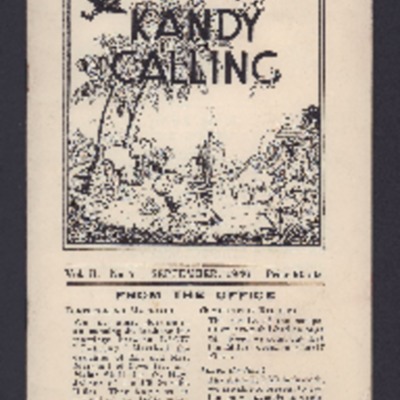 The last issue of Kandy Calling. A magazine with news, quizzes, stories, sports reports, personalities, photographs, cartoons, letters to the editor and adverts. 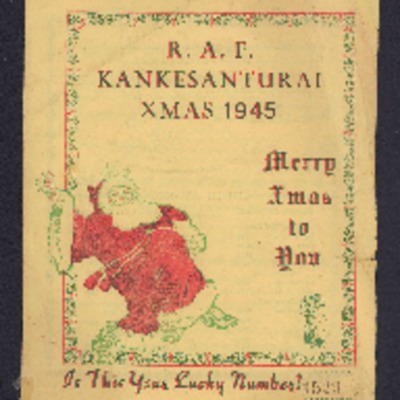 A Christmas card issued by the RAF station with details of the events happening over Christmas, social and sporting. There are also adverts for church services and various merchants and a book shop.
View all 17 items