17 items concerning Flying Officer Laurence O'Hara Larmer (b. 1920, 430037 Royal Australian Air Force). Lawrence Larmer volunteered for the Royal Australian Air Force and trained in Australia and Canada. He flew operations as a pilot flying Halifax with 51 Squadron from RAF Snaith. The collection consists of one oral history interview with him, wartime photographs of aircraft, aircrews and targets, his logbook, route maps, and an official certificate.

The collection was donated by Laurence Larmer and catalogued by Nigel Huckins. 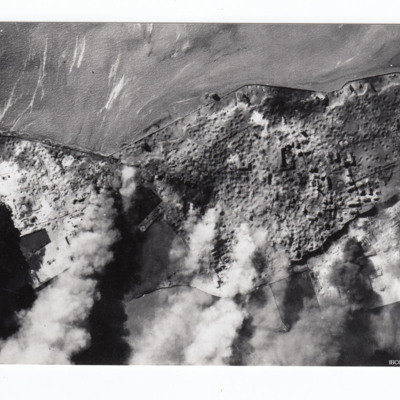 Reconnaissance photograph of Heligoland after bombing, with most buildings and port facilities destroyed and large plumes of smoke from fires.

Additional information about these items was kindly provided by the donor. 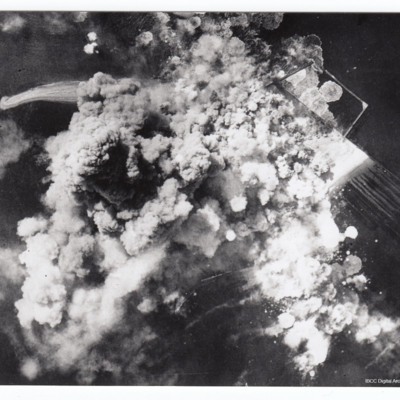 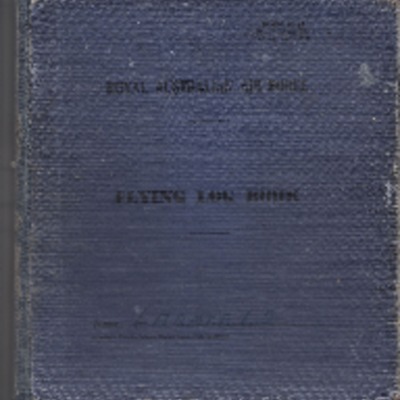 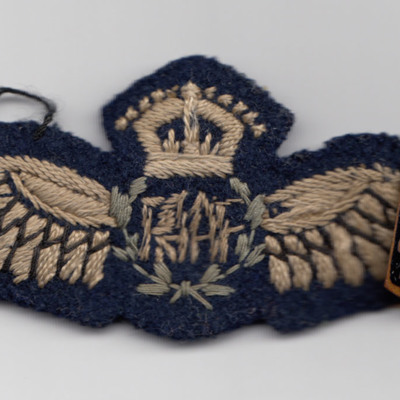 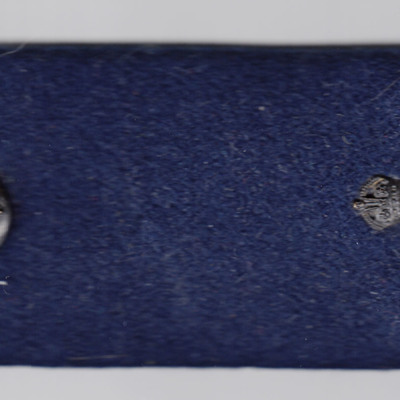 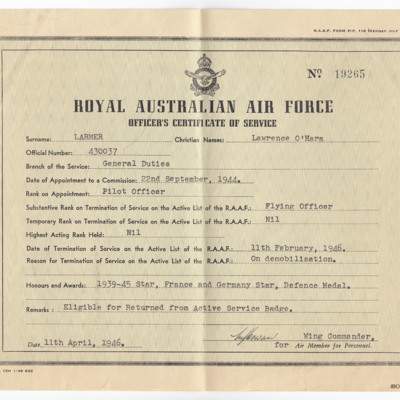 1 - news cutting concerning a 92 year old Second World War veteran penning an apology for bombing German cities. 2 - letter from Laurence Larmer while offering no apology, regretting that the operation he flew on 11 April 1945 resulted in the loss of… 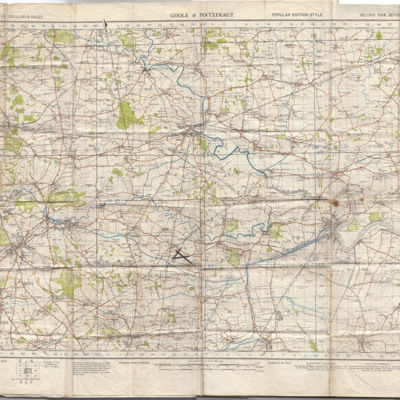 Ordnance survey of England and Wales map, sheet 32, Goole and Pontefract, second war revision 1940, with the intersecting runways of RAF Snaith drawn on. 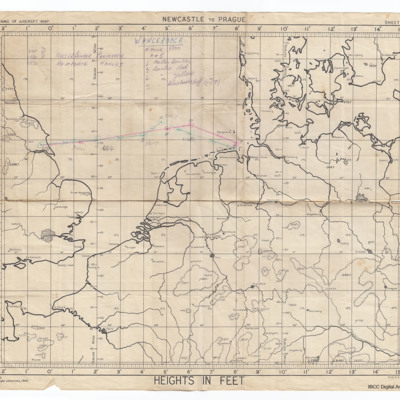 Newcastle to Prague captains of aircraft map showing route from just north of Hull across the North Sea to Wangerooge island. Includes timings and call signs. 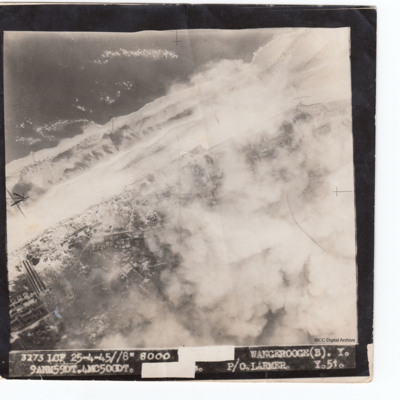 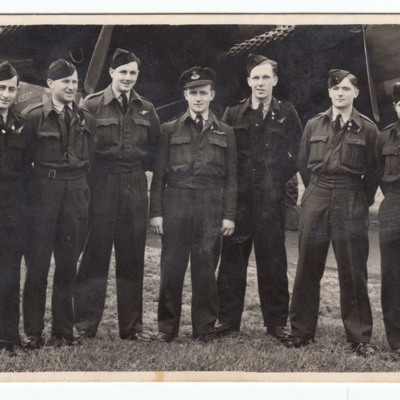 Laurence Larmer with his aircrew wearing battledress and side caps standing in front of an aircraft. On the reverse four signatures. 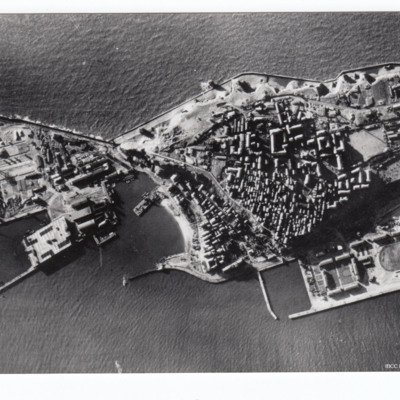 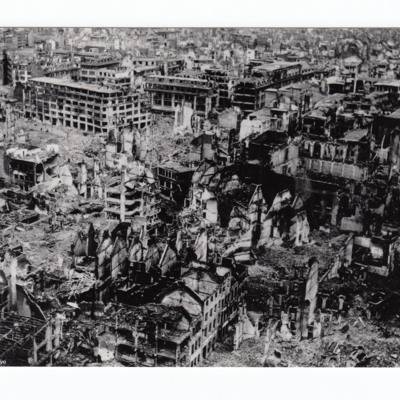 View of city centre with many badly damaged buildings as well as some completely destroyed. 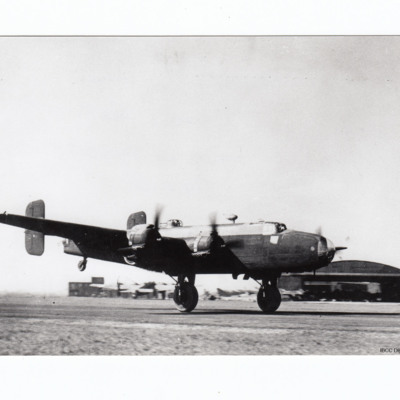 Front quarter view of the starboard side of a Halifax on runway with tail up. Hangar in the background. On the reverse 'Halifax 'U' Uncle. 51 Squadron, damaged on take-off 23.3.45'.

Personnel in front of Halifax 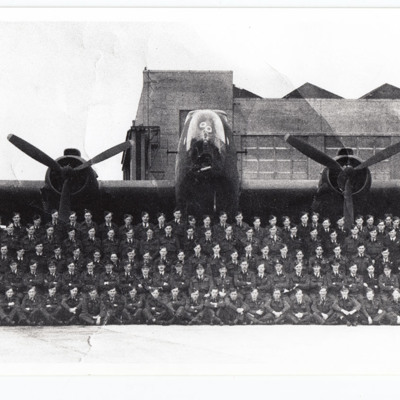 One hundred plus 51 Squadron personnel in five rows in front of a Halifax. In the background on right the top of a hangar. 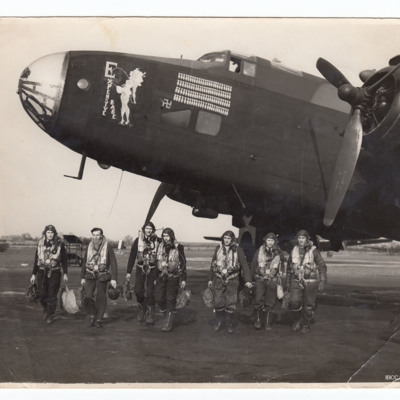 Side view of the front of a Halifax. On the nose a silhouette of a chorus girl with 'Expensive Babe'. Under the cockpit, four rows of 25 bomb symbols and one swastika. In front seven aircrew in flying suits and Mae Wests walking away from aircraft.…

Lawrence Larmer was born in Australia in 1920. After completing school he went to work on the Beaufort aircraft in the Department of Aircraft Production. He was called up in 1942 and volunteered for the Royal Australian Air Force to avoid the army.…
View all 17 items