17 items. The collection concerns Corporal Dennis Terry (938465 Royal Air Force) and contains documents and photographs. He served as a fitter with 166 Squadron and worked on Lancaster ME746 AS-R2 (Roger Squared).

The collection has been donated to the IBCC Digital Archive by Rob Terry and catalogued by Barry Hunter. 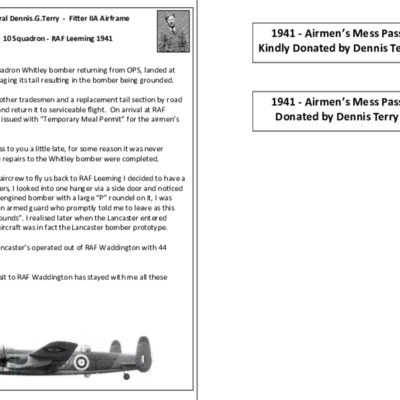 A note explaining the return of a Temporary Meal Permit Pass.

A story based on the service of Lancaster ME746 AS-R2 (Roger Squared). There is a slightly shorter version included. 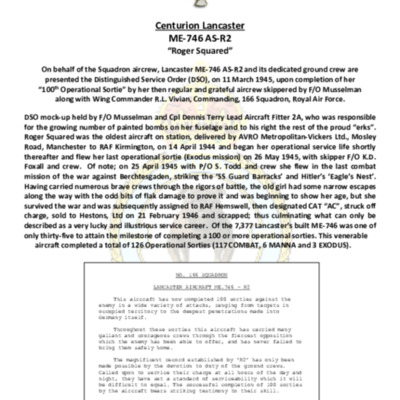 A document referring to the DSO awarded to Lancaster ME746 AS-R2 (Roger Squared). It describes some of the operations undertaken and its maintenance by Dennis. 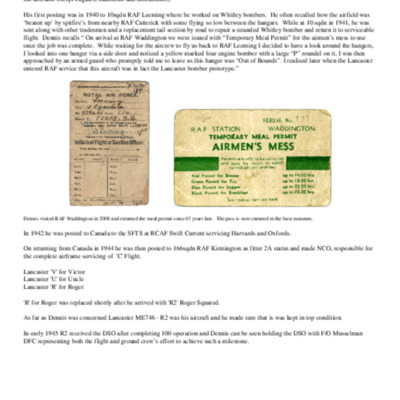 A brief biography of Dennis featuring photographs described in the collection. It covers his training and service as a fitter in the UK and Canada. He maintained a Lancaster that completed 124 ops and the aircraft was, unusually, awarded a DSO.
A… 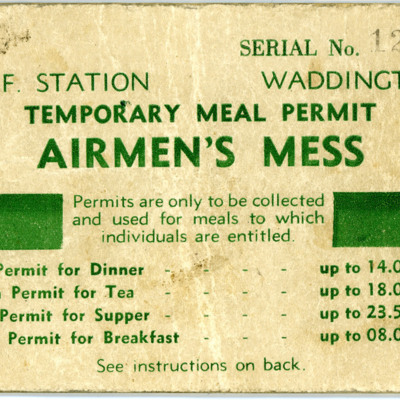 A permit allowing the bearer to have meals in the Airmen's Mess. 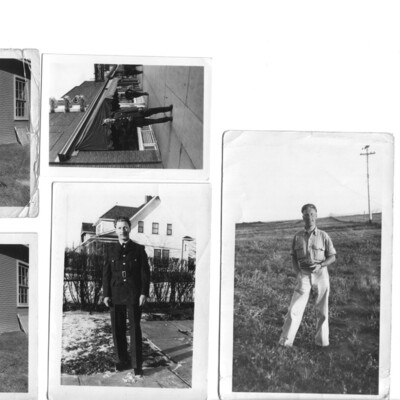 Two pages with nine photographs.
#1, 2, 3, 4 and 6 are Dennis standing in uniform.
#5 is Dennis standing but dressed casually.
#7 is four men including Dennis at the tail of an Oxford.
#8 is 16 airmen in the snow outside a wooden hut.
#9 is… 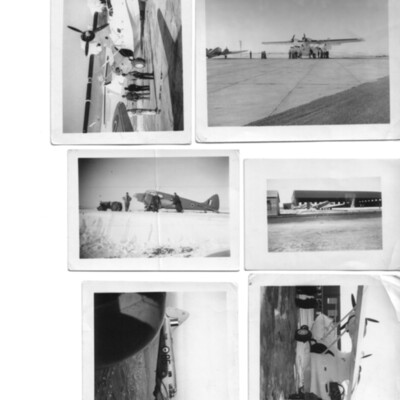 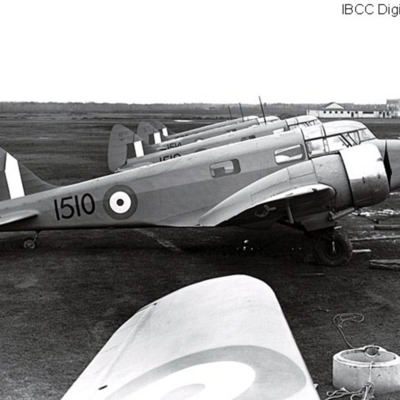 Airmen, Trainees and an Oxford Three photographs. #1 is 11 airmen and ground crew under the front of a Lancaster. #2 is a group of 12 trainees standing in the snow in front of a wooden hut. #3 is an Oxford being towed by a tractor. This photo is repeated on a separate sheet. 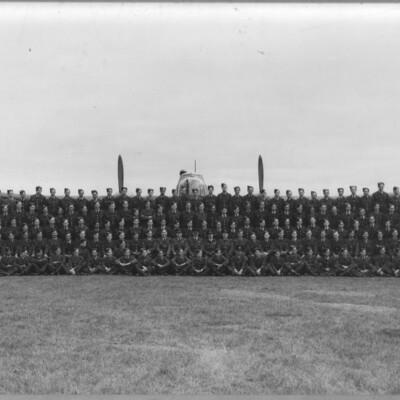 A large group of airmen arranged in five rows in front of a Whitley. 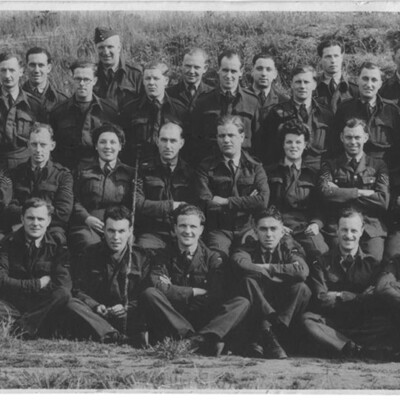 A group of 44 arranged in four rows.

62 Airmen and an Oxford 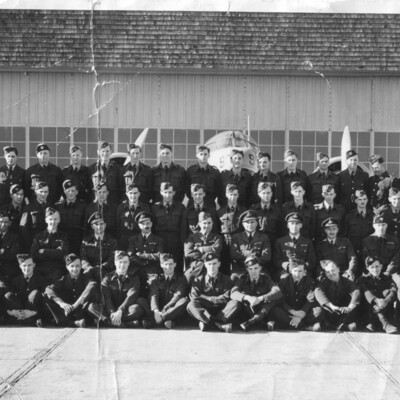 62 trainees and officers in four rows in front of an Oxford. 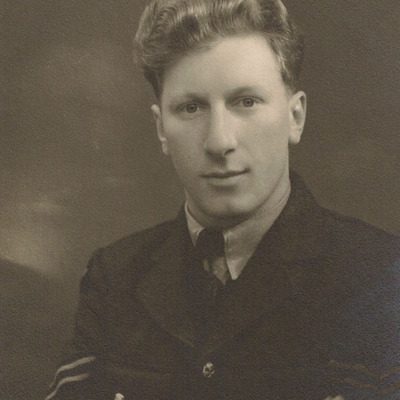 A head and shoulders portrait of Dennis. 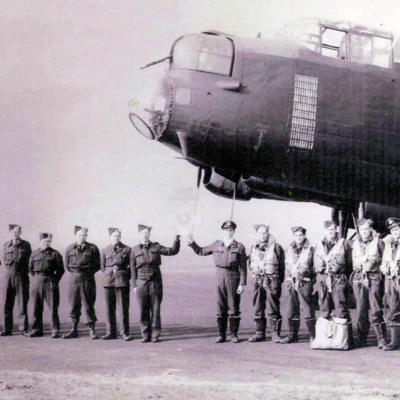 Aircrew and ground crew holding the DSO awarded to Lancaster ME746 AS-R2 (Roger Squared).
There are five similar images of the event. In the second photo there are more operations added to the nose and R2 has been painted on. The last has some text… 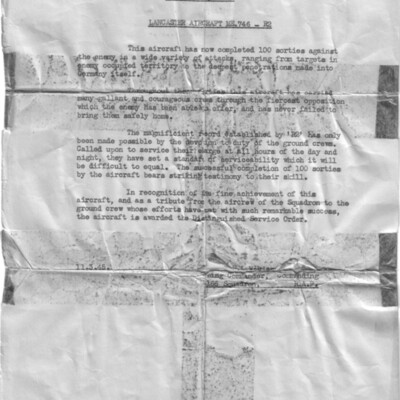 A letter awarding a DSO to Lancaster ME746 for 100 operations. 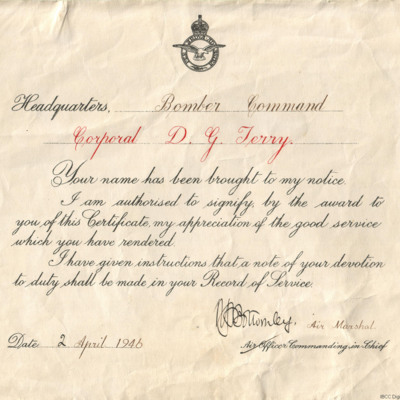 A certificate awarded to Dennis. 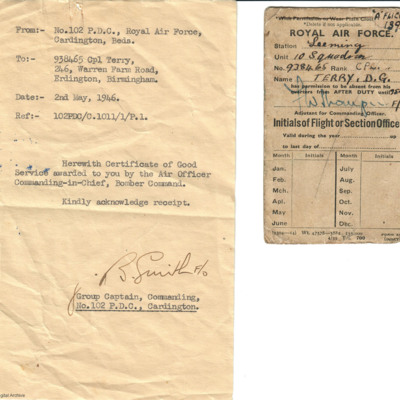 A notification of a certificate awarded to Dennis for good service and a leave pass.
View all 17 items