The collection concerns Sergeant John Brennan DFM (1210913 Royal Air Force) and contains his log book as well as documents including a Goldfish Club certificate, notes from station and squadron operational record book with details of activities and operations, memoirs, newspaper cuttings and correspondence. In addition, contains operation order and other details for 617 Squadron's attack of German dams on 16/17 May 1943.

He flew operations as a wireless operator with 102 and 35 Squadrons.

The collection has been donated to the IBCC Digital Archive by T Noble and catalogued by Nigel Huckins. 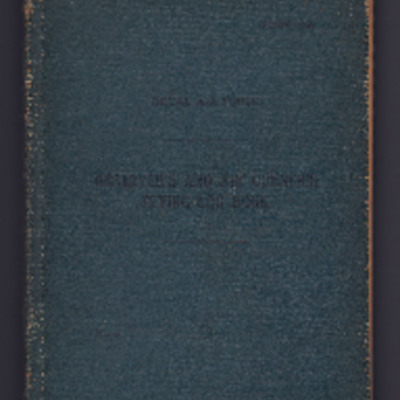 Operation order for Eder, Möhne and Sorpe operation and other details 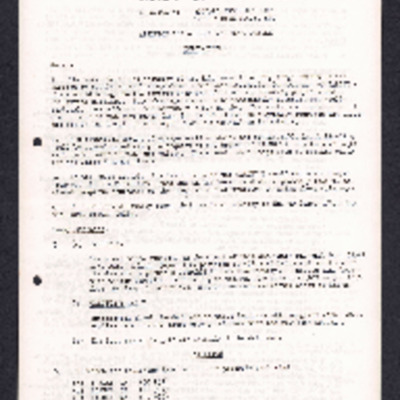 5 Group operation order No B.976. Provides explanation for attack on Ruhr Dams, enemy defences, 20 special Lancaster from 617 Squadron, routes to be flown by all three waves. Goes on with detailed plan of attack, method and timing. Continues with… 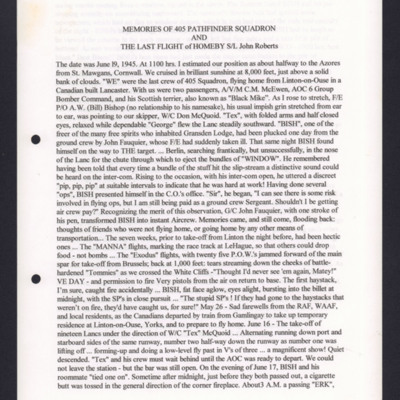 Account of the last crew from 405 Squadron flying home from RAF Linton-on-Ouse. Tells the story of an airman groundcrew plucked to replace a flight engineer who had been taken ill and subsequently being transformed into aircrew. Mentions Operations… 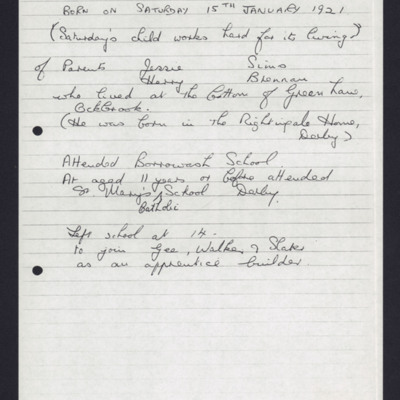 First - over 400 times they led the way. Article about RAF Pathfinders. Crest and details about 35 Squadron. Also mentions 7, 83 and 156 Squadrons as nucleus of force in August 1942. Mentions some of their attacks and numbers of decorations awarded.… 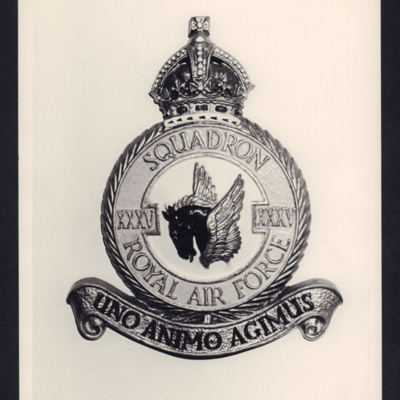 Text for a lecture. Joined RAF as air observer in June 1941. List initial training postings, conversion to Halifax, crewing up and posting to 102 Squadron at RAF Pocklington in May 1943. Describes preparation for operations and lists 6 operations… 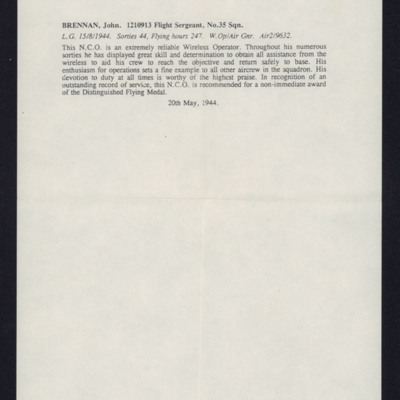 Mentions him showing great skill and determination over an number of sorties.

Certificate on ditching and dinghy drill 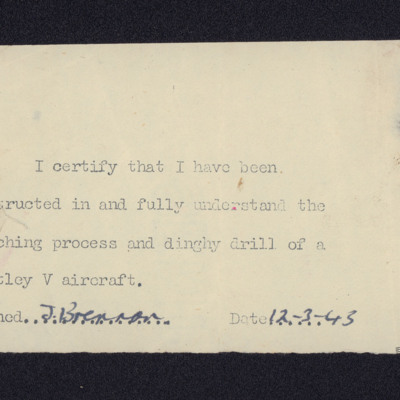 Certifies that J Brenna had been instructed and fully understood ditching process and dinghy drill. 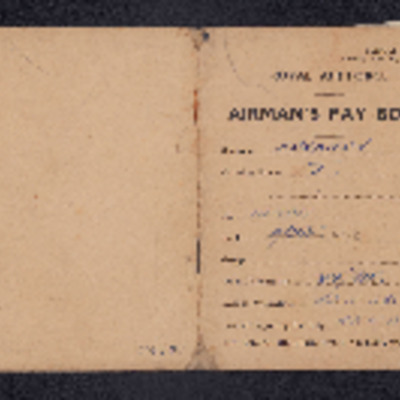 Contains some personal and pay details. 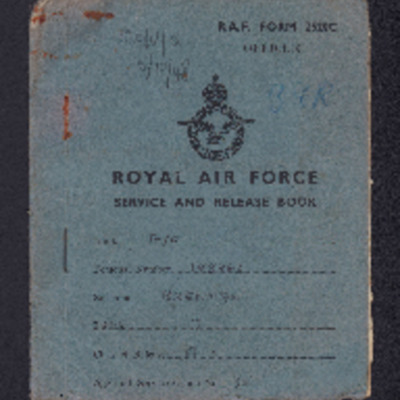 Certificate for award of Pathfinder badge 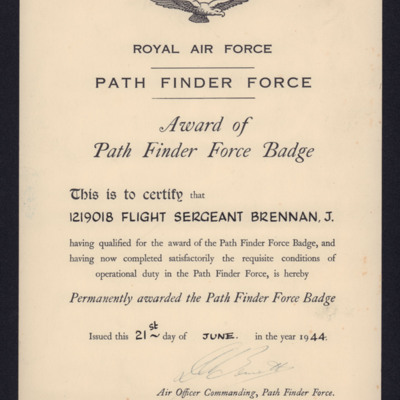 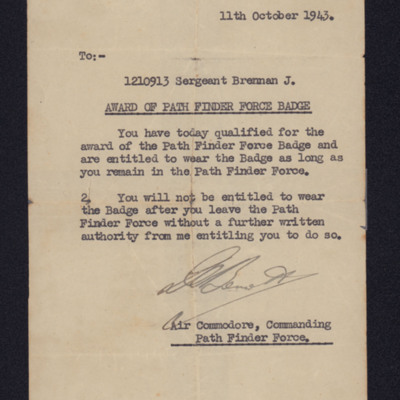 Letter to Sergeant Brennan stating that he was now entitled to wear Pathfinder badge. 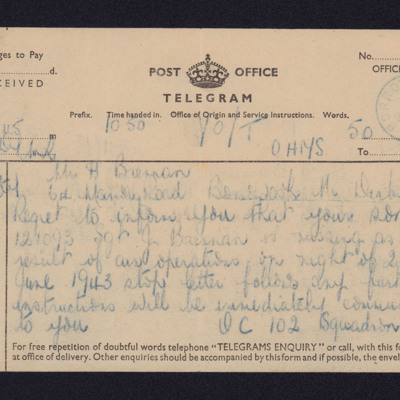 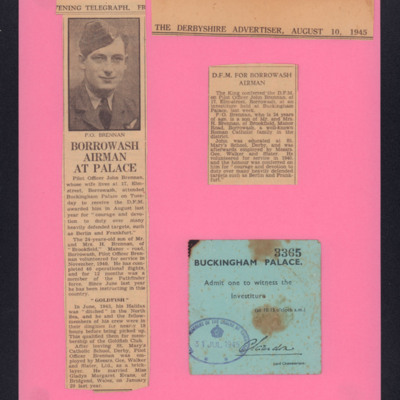 Two newspaper cuttings concerning award of Distinguished Flying Medal for Borrowash airman, Pilot Officer John Brennan. Gives some personal information and mentions his Halifax ditching in the North Sea and being in dinghies for 18 hours. Includes a… 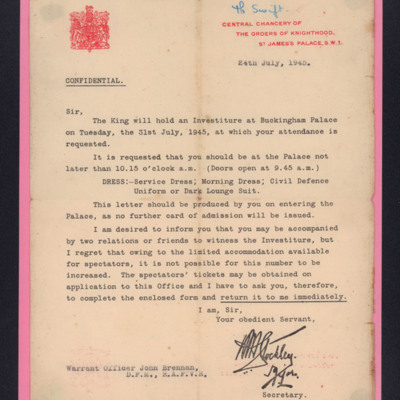 Request his attendance at investiture at Buckingham Palace. 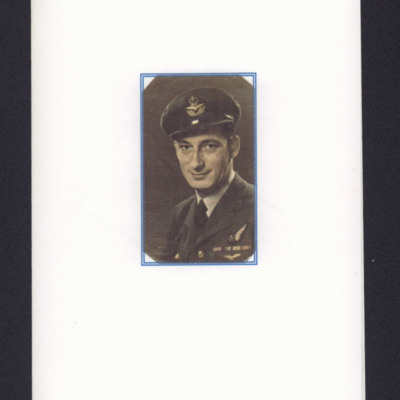 Head and shoulders portrait of an RAF officer wearing tunic with wireless operator brevet and medal ribbons and peaked cap. 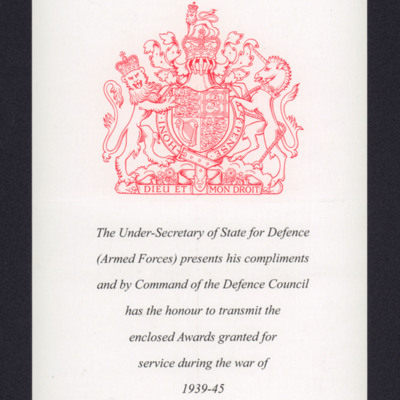 Cover note from under-secretary of state for defence and on list of campaign stars, clasps and medals shows a tick against Bomber command clasp. 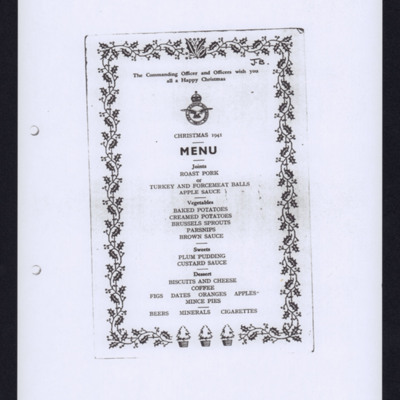 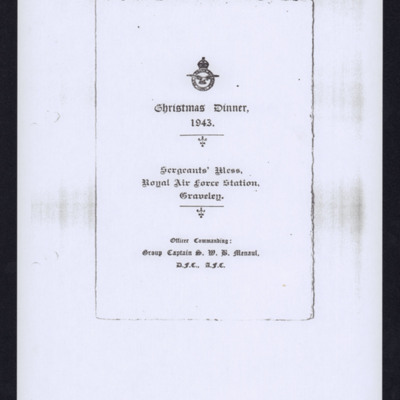 Letter to Jack Brennan congratulating him on decoration 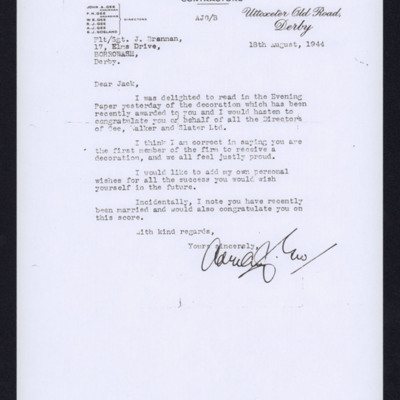 On Gee, Walker & Slater Ltd headed notepaper congratulating him on behalf of the company's directors on being awarded a decoration and his recent marriage. 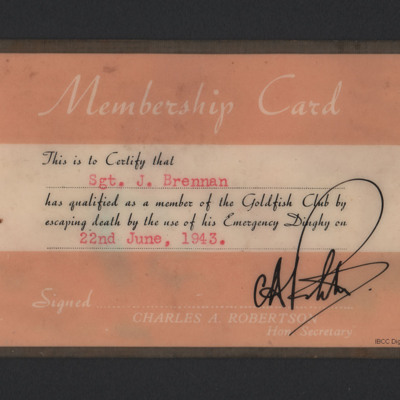 Made out for Sergeant J Brennan signed by Charles Robertson 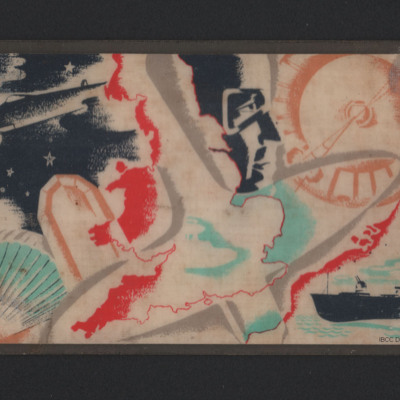