19 Items. The collection consists of one oral history interview with Philip Batty (b. 1925). He discusses the death of his older brother Dennis early in the Second World War, his wartime service with 50 Squadron at RAF Sturgate as a wireless operator/ air gunner, and his long post war career. The collection also includes a number of group photographs of airmen after training, photographs of aircraft in southern Africa, his log book and propaganda material.

Citation for Distinguished Flying Medal for three members of 226 Squadron 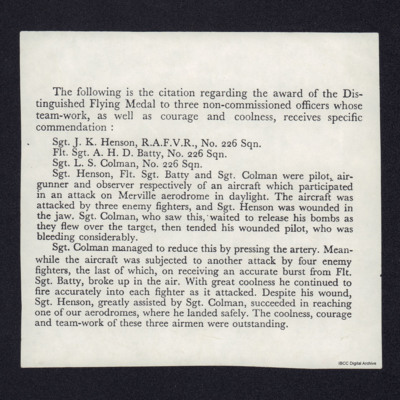 Sergeant J K Henson, Flight Sergeant A H D Batty and Sergeant L S Coleman all of 226 Squadron were awarded the Distinguished Flying Medal for the action around a daylight attack on Merville airfield. 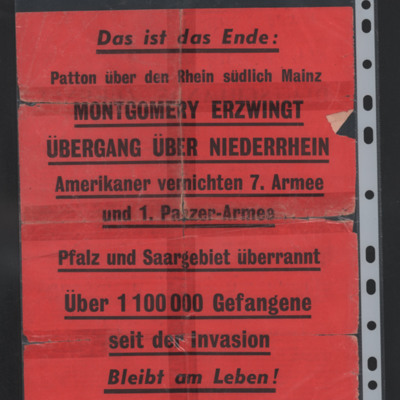 Reports that the American Army has crossed the Rhine near Mainz and provides a summary of President Roosevelt’s report to the American Congress on the Yalta Conference: the need for Germany’s unconditional surrender; the nature of Germany’s… 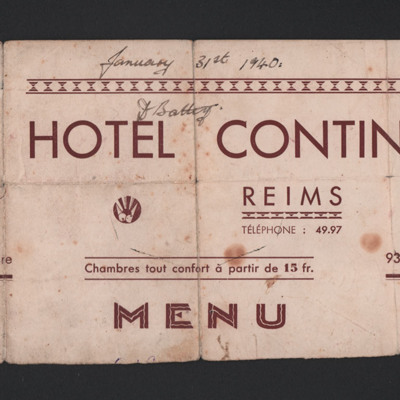 Part of menu from Hotel Continental, Reims, annotated D Batty. On the reverse, messages and signatures. 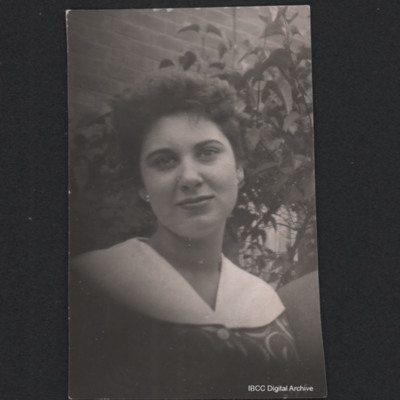 Head and shoulders portrait of a woman wearing a dress with white collar. Brick wall and greenery in background. 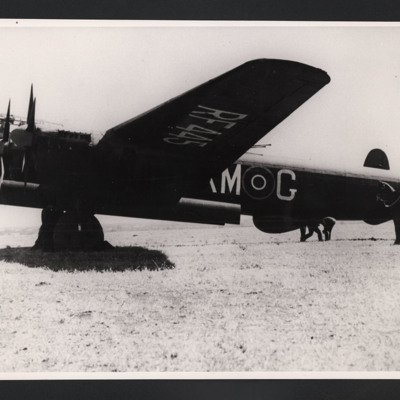 Lincoln RF445, R-MG on the ground, surrounded by grass, background indistinct. Some individuals working on aircraft, another is on horseback wearing topee. 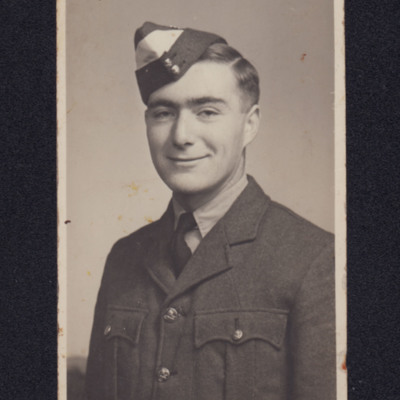 Head and shoulders portrait of Philip Batty with aircrew training flash in cap. On the reverse, photographer's stamp.

Philip Batty and an airmen 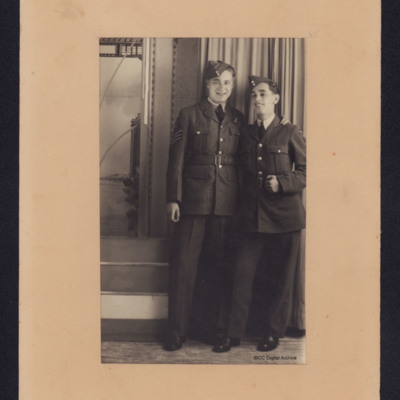 One is a sergeant with half wing brevet and wireless operator flash on sleeve, the other is an airman. Captioned 'Horace and myself August 1940 Belfast'.

Philip Batty with another airman 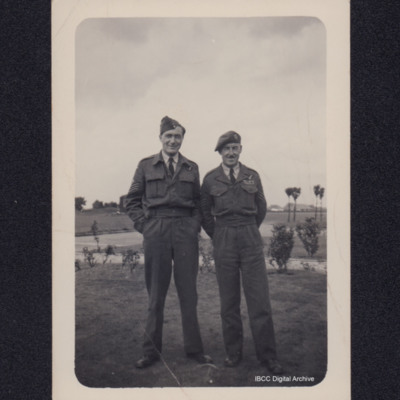 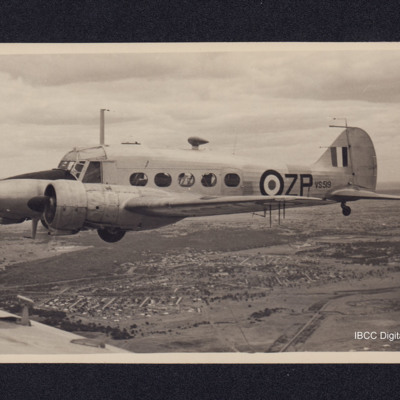 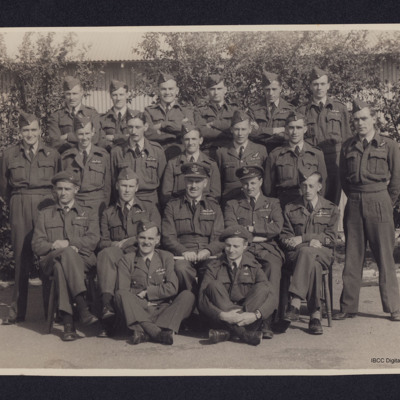 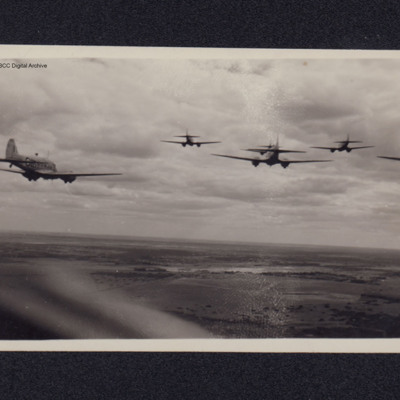 Air-to-air view of five aircraft in loose formation, wing of a sixth visible, flying over land with a river running left to right. On the reverse 'Forming up after take off', '1949 Thornhill'. 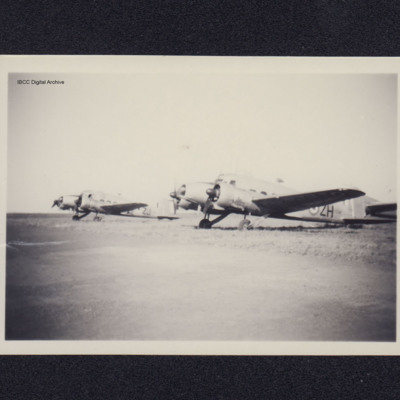 Two Ansons are on the ground, parked on the grass. On the reverse 'KASAMA 1948'. 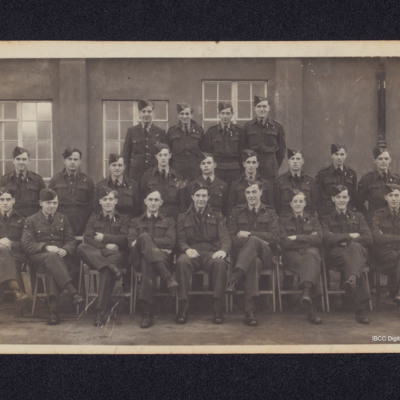 A summary of Philip Batty's flying hours by aircraft type 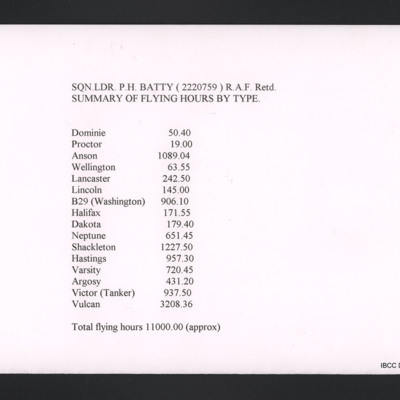 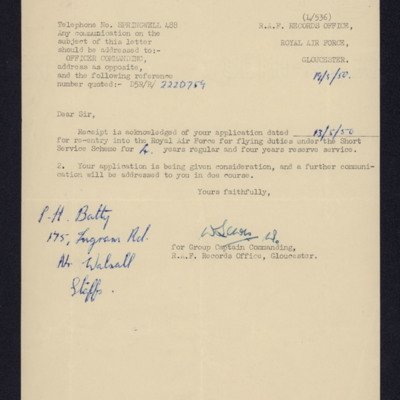 Philip Batty applied to rejoin the Royal Air Force having left after his wartime service. 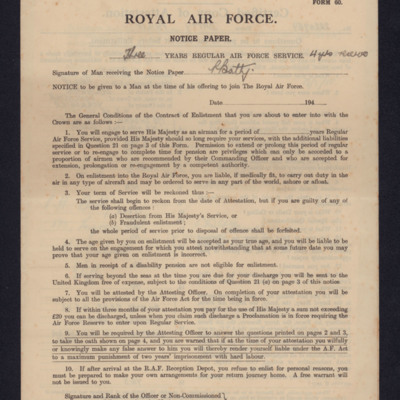 Philip Batty grew up in Walsall. He discusses the death of his older brother Dennis, a wireless operator with 226 Squadron, early in the Second World War. Philip volunteered for aircrew. After training, he was posted to 50 Squadron at RAF Sturgate as…
View all 19 items