34 items. The collection concerns Flying Officer Aubrey Read (1920 - 1943, 627232, 50611 Royal Air Force) and contains his log book, photographs and documents. He flew operations as a a wireless operator with 106 Squadron and was killed 26 November 1943.
The collection has been donated to the IBCC Digital Archive by David Leitch and catalogued by Trevor Hardcastle.

Additional information on Aubrey read is available via the IBCC Losses Database. 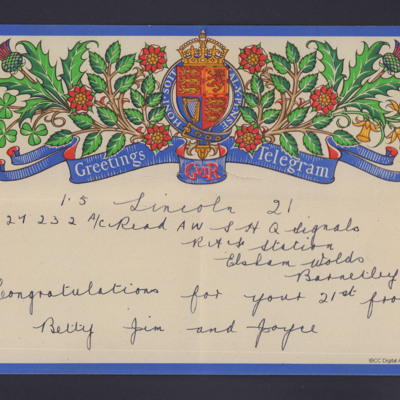 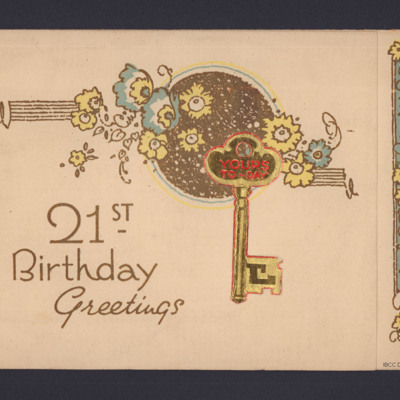 Letter to Aubrey Read's mother from the Air Ministry 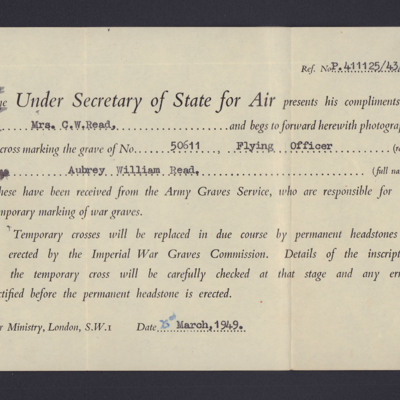 Covering letter for the photograph of the temporary cross marking the grave of Aubrey and the other members of his crew. Photograph of the grave. On the reverse 'Grave 9-12, Row B, Plot. Brittish [sic] Military Cemetary, Bad Tolz, Durnbach, Germany.' 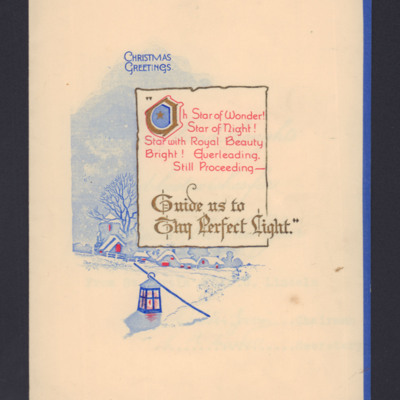 Card is from St Martin's Y.P.G. Lincoln and is signed by the chairman and the secretary. 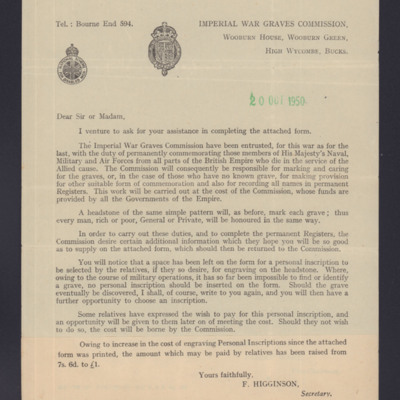 Covering letter for a form that the Commission would like Aubrey's mother to complete to enable them to provide an appropriate headstone for Aubrey's grave. Specimen of the headstone. 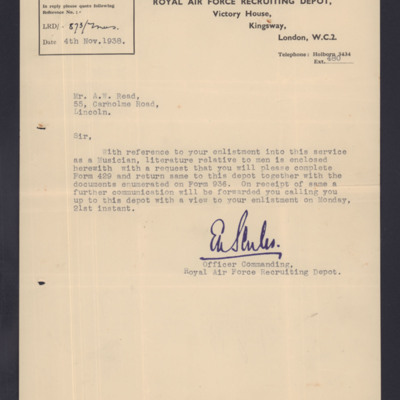 Letter instructing Aubrey to complete an enclosed form and send the documents listed on an enclosed F936. The letter concerns Aubrey's request to join the RAF as a musician.

Letter to Aubrey Read's mother from Ministry of Pensions 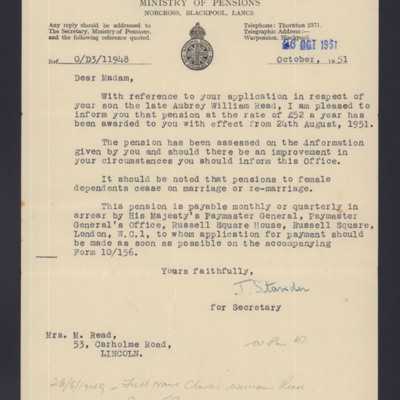 Letter informs his mother that due to Aubrey's death she has a pension of £52 per year. With two forms one describing how to draw the pension, the other describing how it had been calculated.

Aubrey Read's Certificate of Discharge from the Territorial Army 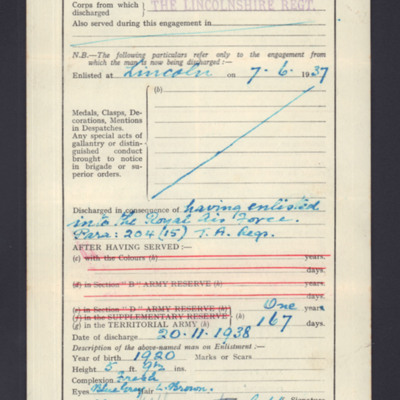 Discharged from the Band of the Lincolnshire Regiment, issued when he joined the RAF. 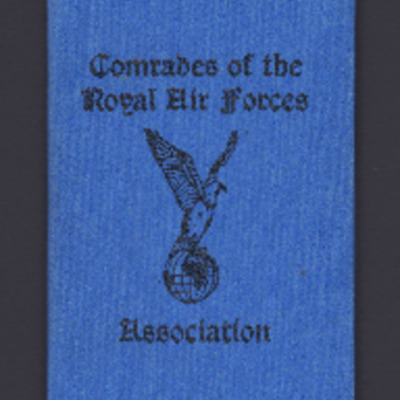 Membership card and rule book for the Sleaford district Branch issued to Aubrey when he was a member of the Royal Air Force College Cranwell Band. 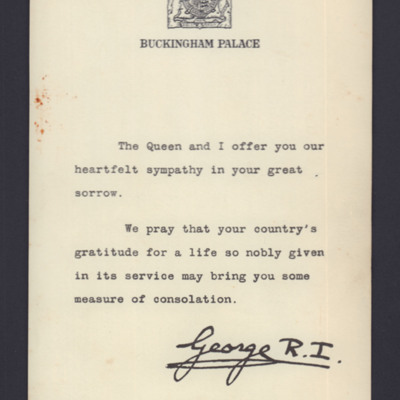 Letter from King George VI and the Queen, offering their sympathy, together with the envelope. 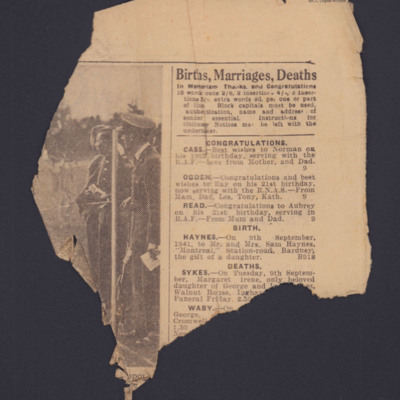 Notice published in the Lincolnshire Echo, congratulating Aubrey on his 21st birthday from his Mum and Dad.
A 21st birthday card. 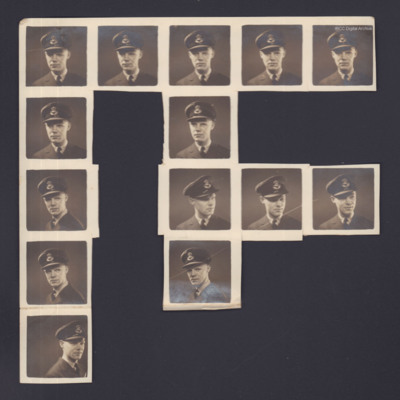 Photographs of Aubrey, head and shoulders, in uniform, contact sheet format. Some in a booklet. 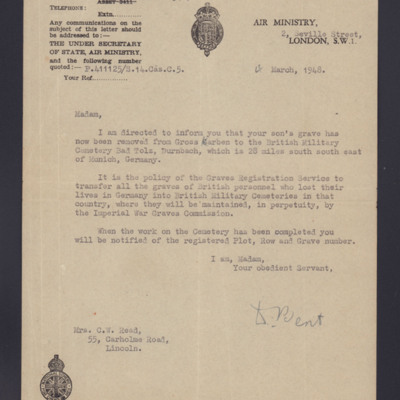 Letter is to inform his mother that Aubrey is being moved from his temporary grave to his final resting place.

Letter to Aubrey Read's mother from the Air Ministry 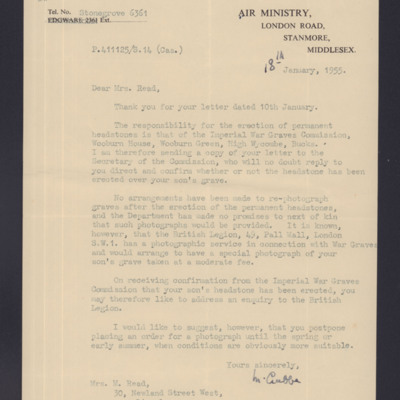 Letter sent in response to an enquiry about provision of a headstone for Aubrey's grave and obtaining a photograph of the grave. Letter informs his mother that the Imperial War Graves Commission provides head stones and that the British Legion have a… 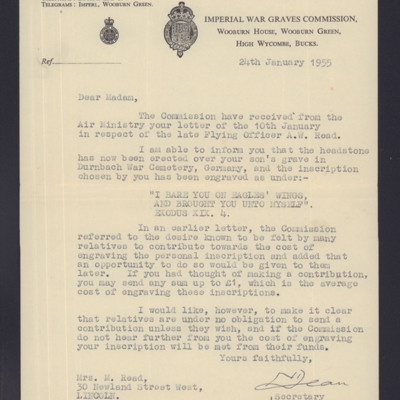 Letter from the Imperial War Graves Commission advising his mother that a head stone had been placed marking Aubrey's grave at the Durnbach War Cemetery and that the inscription that she had asked for had been inscribed and that if she wished to, she… 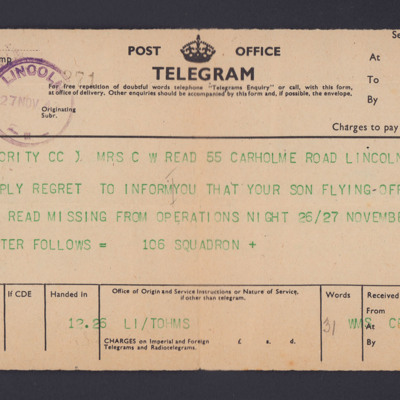 Sent from 106 Squadron advising his mother that Aubrey had not returned from an operation. 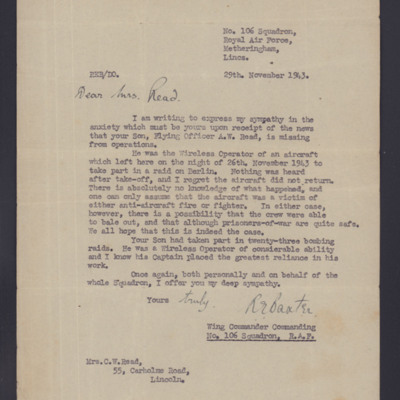 Letter from Officer Commanding 106 Squadron expressing his sympathy and suggesting the possibility that Aubrey had managed to bale out. 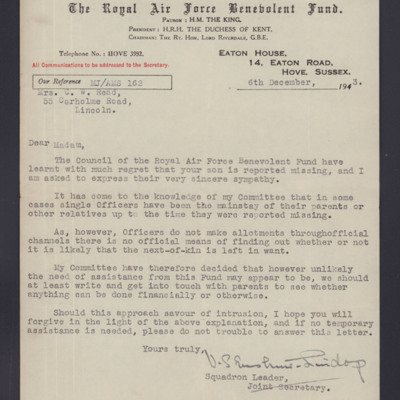 The letter from the Royal Air Force Benevolent Fund asks if the family need any financial help after Aubrey's death.

Letter to Aubrey Read to arrange an audition 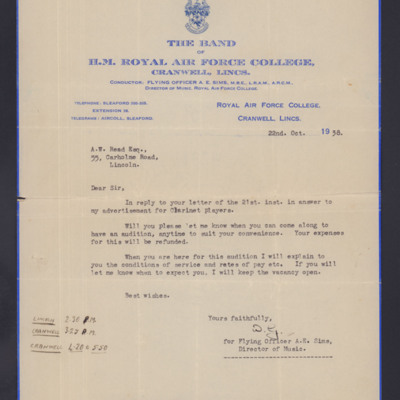 From Director of Music at the RAF College Cranwell, inviting him to arrange an audition as a clarinet player. 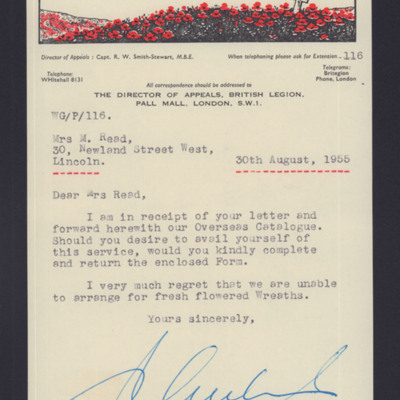 Letter from British Legion to Aubrey's mother, sent with their Overseas Catalogue. 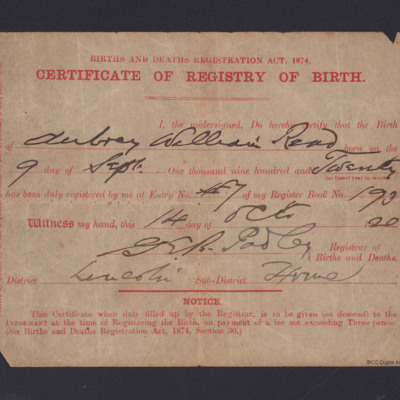 Issued by the Lincoln Registrar.

Receipt for issue and return of Territorial Army badge 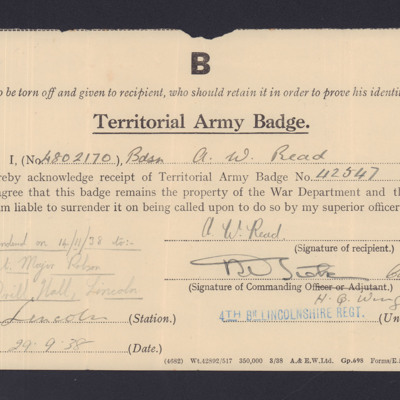 Badge was issued in Setember and surrendered in November. 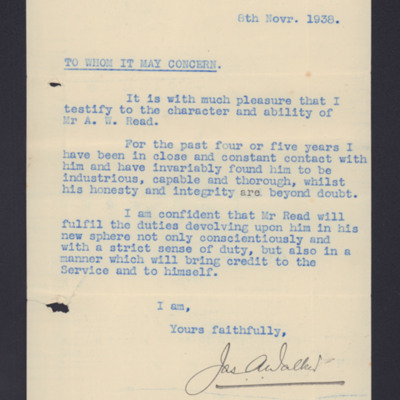 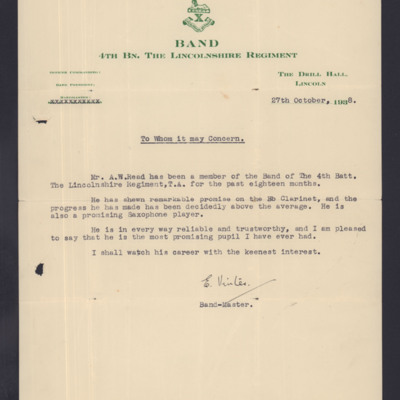 Reference is from the band master of 4th Battalion the Lincolnshire Regiment Territorial Army.
View all 34 items