31 Items. An oral history interview with Irene Howard née Green (1925 - 2018), Civil Defence Warden Service and war damage compensation documents, identity cards and ration books as well as various Christmas greetings and photographs of family. She worked in a factory in Manchester during the war and as an Air Raid Precaution Warden. Her house was bombed in December 1940.

The collection was donated by Irene Howard and catalogued by Nigel Huckins. 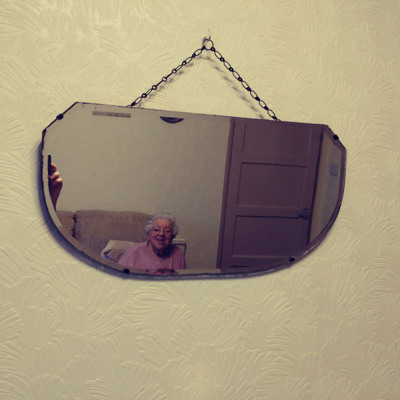 Irene Howard wearing pink jumper seen in a mirror which she rescued from her wartime bombed out home at 10 Tarbuck Street, Salford. 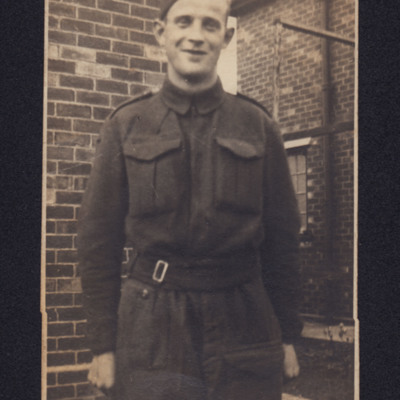 Three quarter length photograph of a man wearing battledress and side cap. In the background brick buildings. Notes of the reverse. 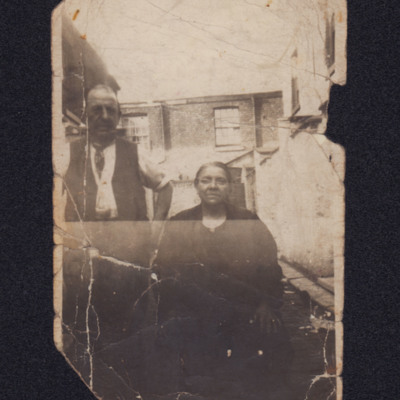 A man with rolled up shirtsleeves wearing waistcoat stands to the left of a seated woman who is wearing a dark dress. In the background and to either side, two-story terraced houses. On the reverse 'Mum and Dad, Sarah and Peter Green'. 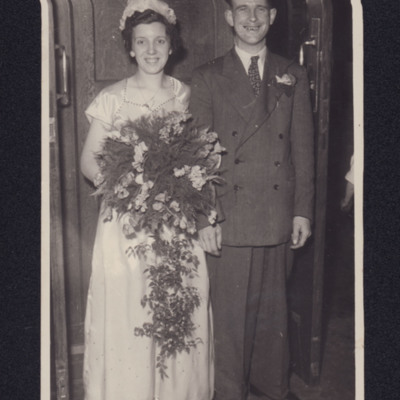 Full length portrait of a wedding couple. Women on the left wearing wedding dress and carrying bouquet and a man on the right in suit. In the background a wooden door. 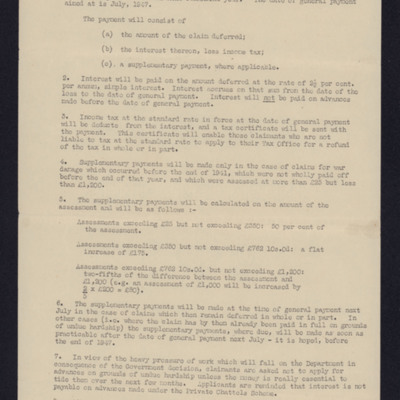 States that the government has decided to pay all deferred private chattels as soon as possible in next financial year to include the amount claimed, interest and a supplementary payment where applicable. Goes on to provide details. Payment aimed at… 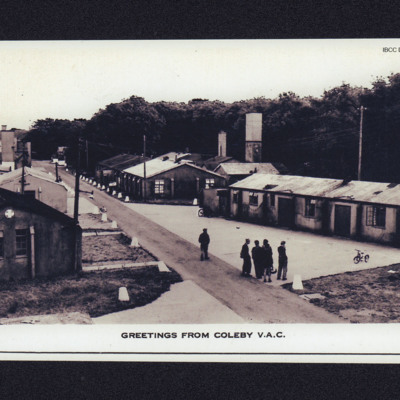 1. Photograph titled 'Greetings from Coleby V.A.C'. A wide pathway runs from bottom right to top left with prefabricated one story buildings either side. To the right trees. A group of people are standing in the foreground on the edge of the… A woman explains to his son the symbolism of the poppies. In the final line she weeps because 'the world is forgetting again'. 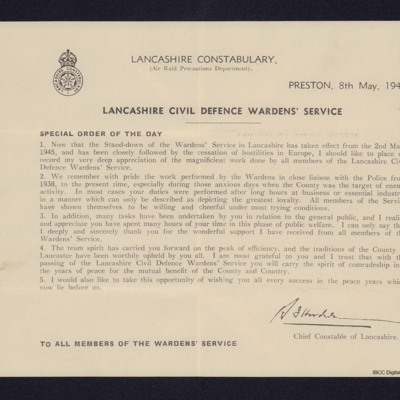 Letter of appreciation to all members of the Lancashire civil defence warden's service. Includes Special order of the day after the service had stood down from 2 May 1945 and offers appreciation of work done. States that work was in close cooperation… 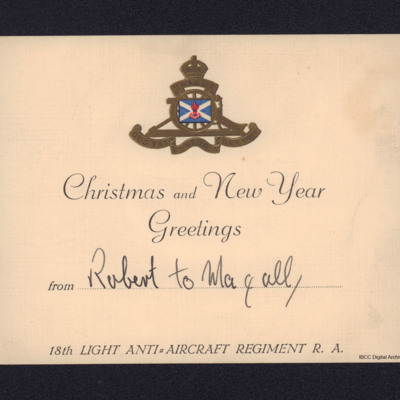 Badge of Royal Artillery with addition of small Saint Andrews cross with red grenade in centre. From ' Robert to Ma & All'.

Christmas greetings from the Mediterranean 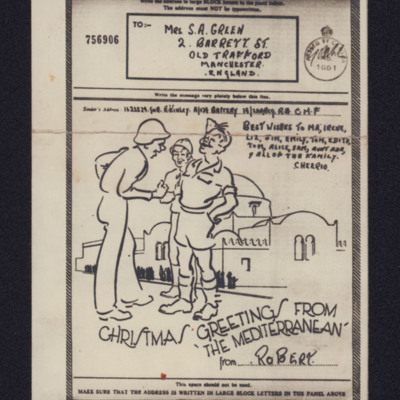 Greetings of the season 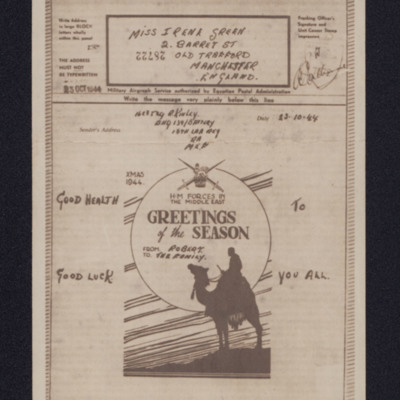 Greetings card addressed to Irene Green page with a silhouette of man on a camel. Greetings of the season H M Forces Middle East from Robert to the family. Annotated 'Good Health, Good Luck, To You All'.

Application for an advanced payment of compensation to avoid undue hardship 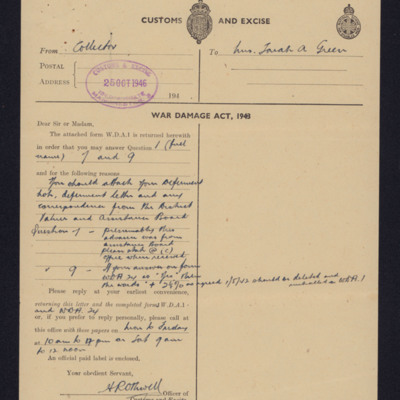 Application made by Sarah Green requesting £47 on 14 October 1946. Covered by request dated 25 October 1946 from Customs and Excise requesting clarification of information on the form. 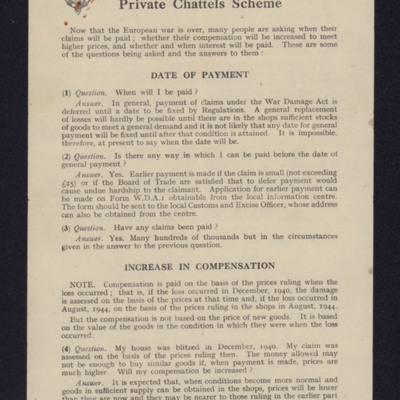 War Damage Act 1943 (Part 1). Issued after European war was over and covers answers to questions on when people will be paid, increases in compensation and payment of interest. 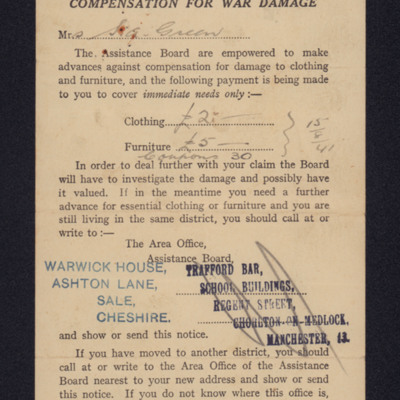 Page 1. Assistance Board making advanced payment to cover immediate needs only of £2 for clothing and £5 for furniture on 15 August 1941. Advice if further help required. Annotated at the bottom '1st advance £6 clothing 27 December 1940, 2nd… 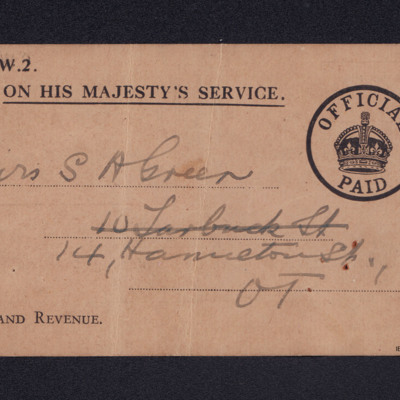 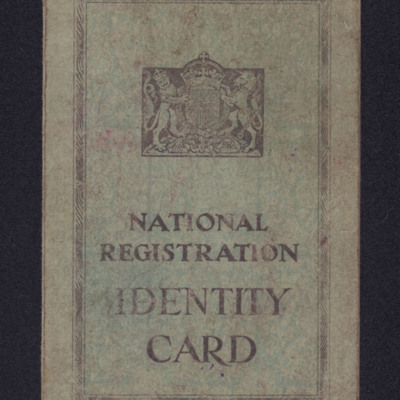 Issue in Manchester 11 November 1946, updated to Waddington and then Coleby, Lincolnshire. Made out by war office for driver Smith G A, includes basic physical features. Valid from 14 December 1943 to 13 December 1944. 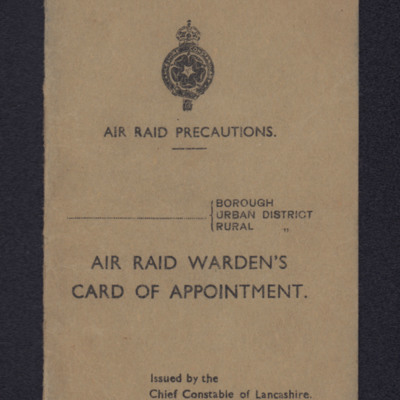 Certifies that Irene Green was appointed as an air raid warden on 11 March 1944.

Robert Kinley next of kin form 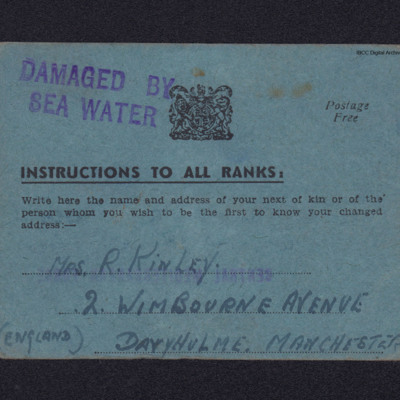 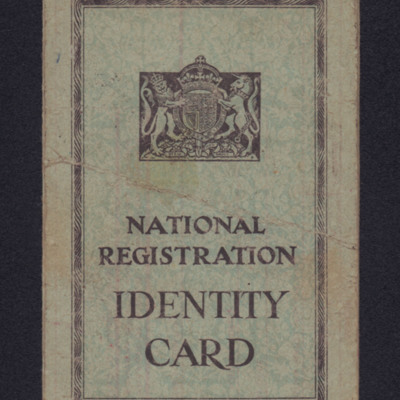 Issued in February 1954 address in Manchester. Update with stamp October 1945, address in Waddington. Update May 1945 to address in Coleby. 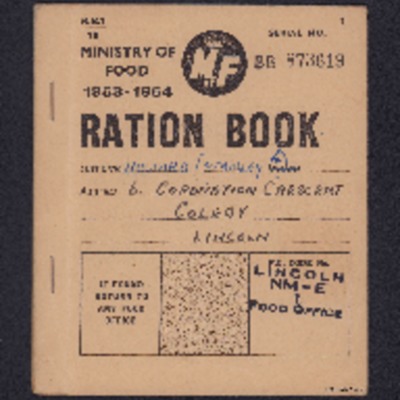 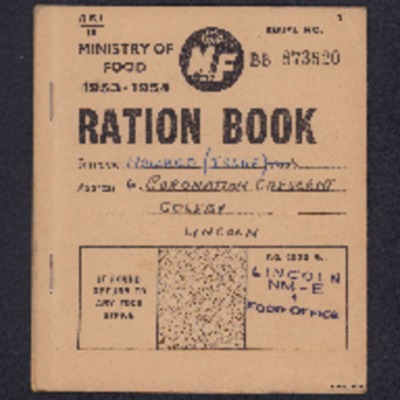 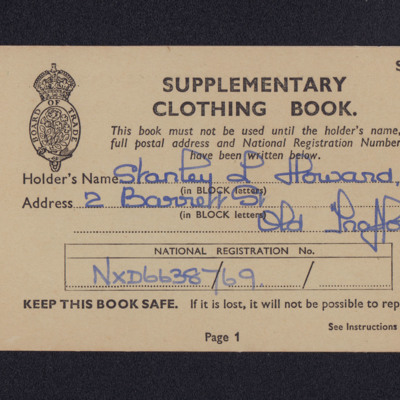 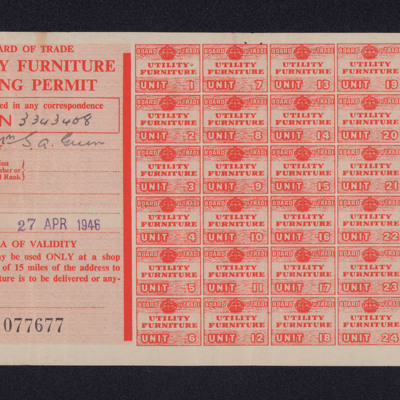 Made out for Mrs S Green on 27 April 1946 and contains 30 utility furniture unit stamps. Instructions for use on the reverse.
View all 31 items