35 items. An album of photographs from Dennis Moore's post war service in the Far East. 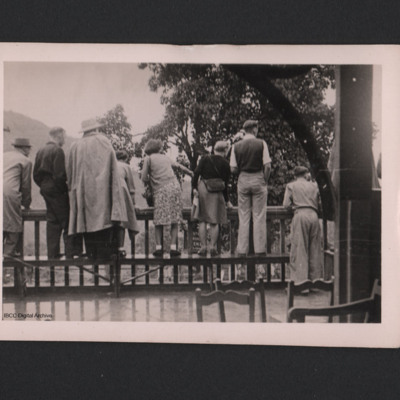 Five men and three woman watching from a balcony. They are standing on a low bench to get a better view. 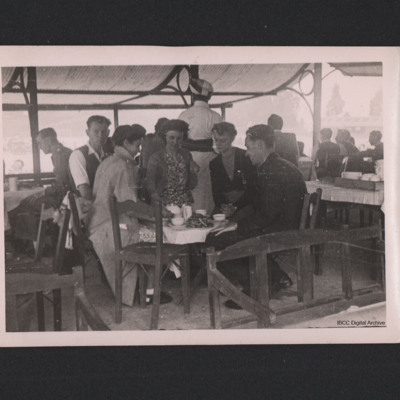 A group of five sat round a table, under a marquee. They are having tea. 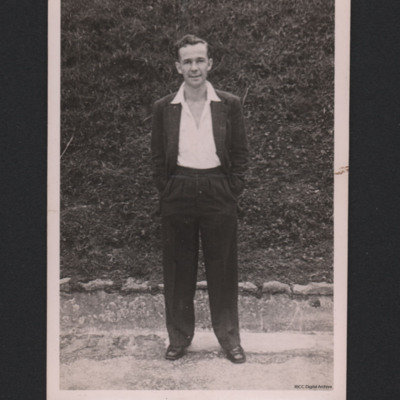 Dennis, standing with his hands in his pockets, wearing a jacket and flannels. 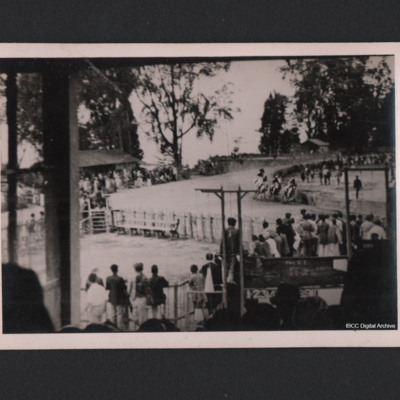 Two photographs from an album.
Photo 1 is four riders rounding a bend watched by many people.
Photo 3 is three horses racing to the finish. 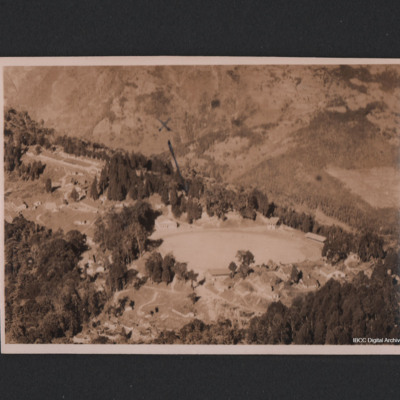 The racecourse at Lebong seen from the hills directly above. On the reverse 'The smallest, highest and crookedest race course in the world. The buildings around are the hospital. I was in the one marked "X". This picture is taken from Darjeeling…

Ship on the Mekong 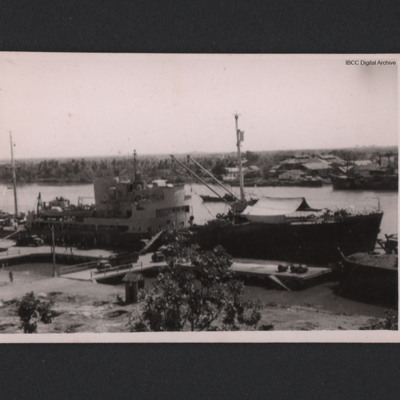 A ship moored at the side of the river. On the reverse 'A French warship in the river at Saigon as seen from the window of the place we stay at there'. 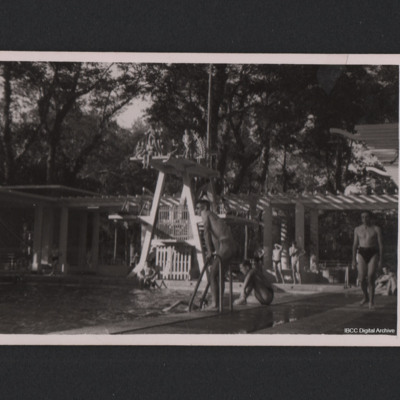 A swimming pool at Saigon with several swimmers. On the reverse 'Cercle Sportif Swimming Club at Saigon. It was meant to be an action photo but I took it a wee bit too soon as the fellow hadn't left the board'. 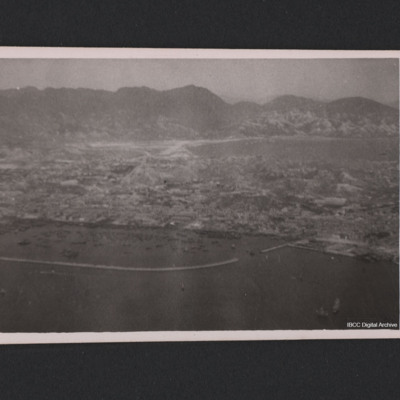 Passengers waiting to board a Dakota 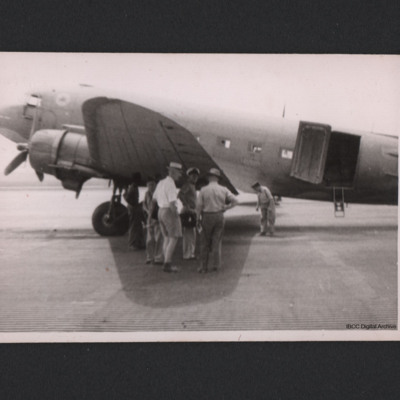 Four passengers in the shade under the wing of a Dakota, waiting to board. On the reverse 'Some of the passengers waiting outside our aircraft whilst at Rangoon'. 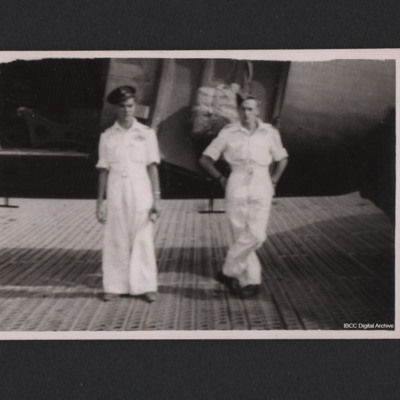 Two airmen standing at the cargo door of a Dakota. They are dressed in white uniforms. On the reverse 'Butch and Ernie in 52 Sqdn white suits which we wear when flying - They don't half get grubby. 'Fraid this one is a bit out of focus'. 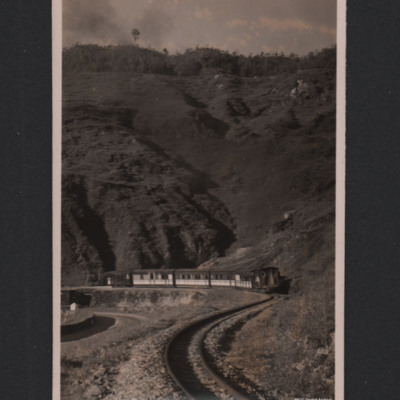 A train and four coaches. On the reverse 'The railway line and road which wind up from the plains to Darjeeling. Its a very chota thing not standing much larger than a man'. 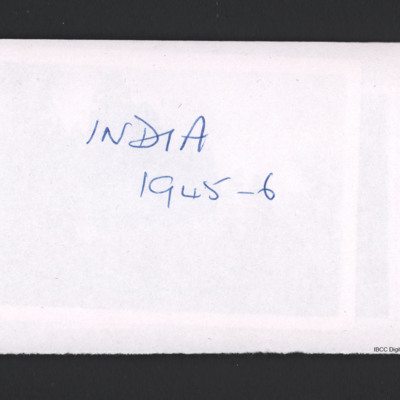 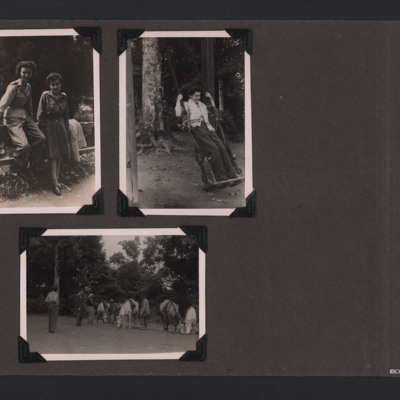 Fifteen photographs from an album.
Photo 1 and 8 are of two women sitting on a fence. They are in uniform.
Photo 2 is a woman on a swing.
Photo 3 is four horses and three women.
Photo 4 is three horses, a man and two women.
Photo 5 is three… 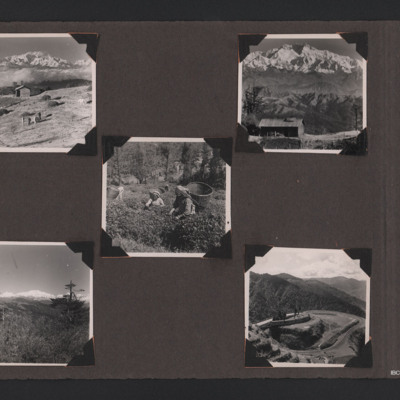 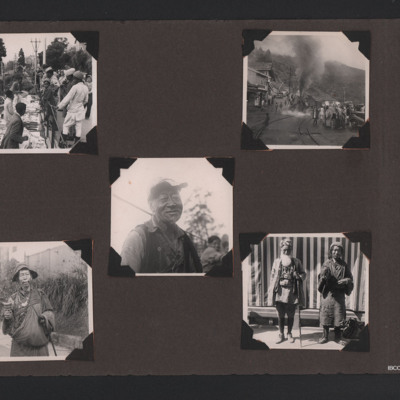 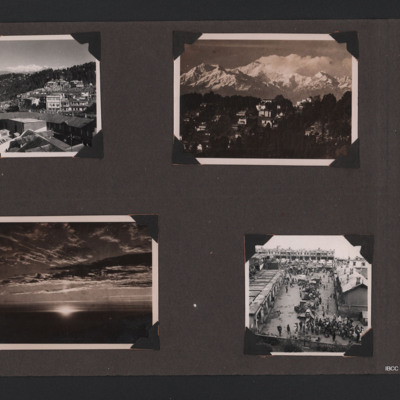 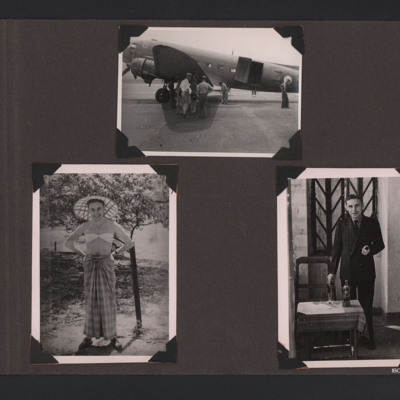 Three photographs from an album.
Photo 1 is a Dakota with four men under the shade of the wing and two men bent over looking for something on the ground.
Photo 2 is a man dressed as a woman wearing a hat, bra and Indian lungi (sarong).
Photo 3 is… 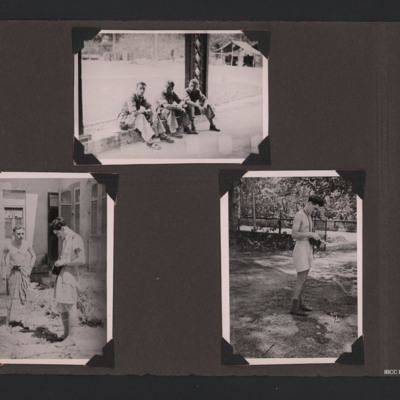 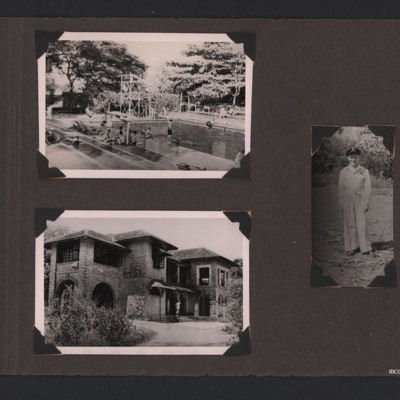 Three photographs from an album.
Photo 1 is a swimming pool at Cercle Sportif Swimming Club, Saigon.
Photo 2 is a house.
Photo 3 is a man in white RAF uniform. 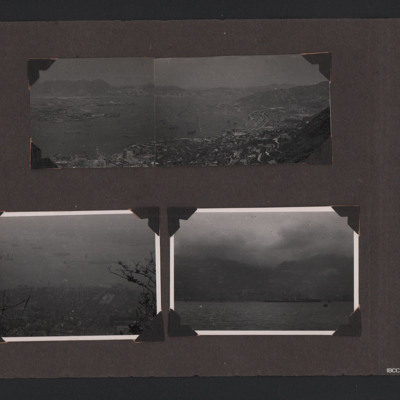 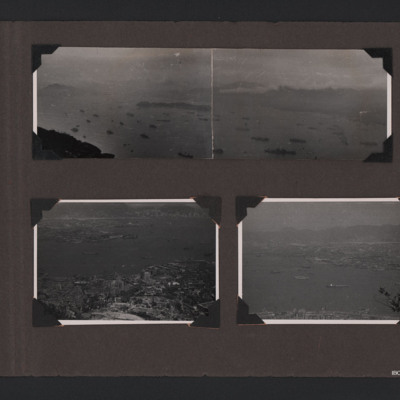 Four photographs from an album.
Photo 1 is two images joined together showing the harbour .
Photo 2 and 3 are views of the harbour from the Peak. 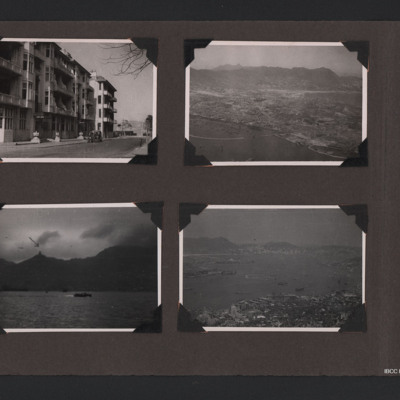 Four photographs from an album.
Photo 1 is the Arlington Hotel, where aircrew stay in Hong Kong.
Photo 2 is mainland Hong Kong, Kowloon, with the aerodrome in the background.
Photo 3 is the Japanese war memorial on the hills behind Hong… 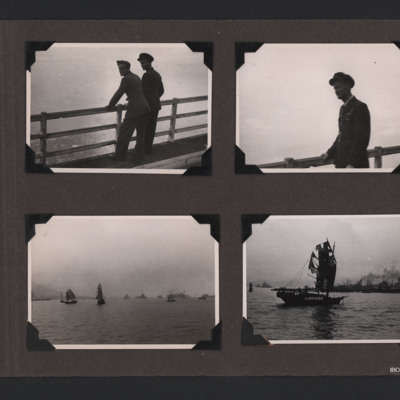 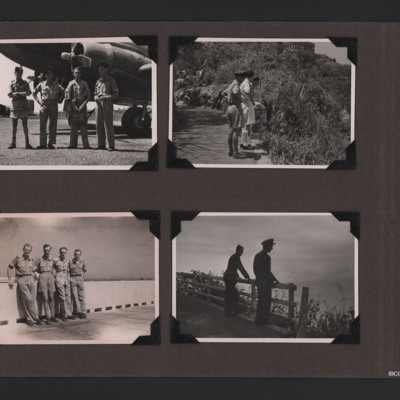 Four photographs from an album.
Photo 1 is four airmen under the nose of Dakota. In the notes they are identified as 'Les, Fleck, Ernie & Butch under the "Durham Star" at Bangkok'.
Photo 2 is three airmen identified in the notes as 'Alf, a… 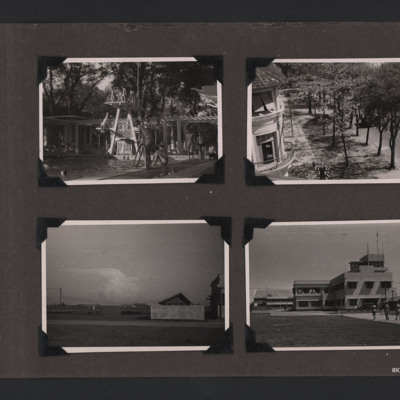