47 items. The collection concerns Flying Officer George Warren (162041 Royal Air Force) he flew operations as a navigator with 626 Squadron until he was killed 16 March 1945 on an operation to Nürnberg. The collection contains his log book, correspondence and photographs.

The collection has been donated to the IBCC Digital Archive by Harris and Vanessa Hibbert and catalogued by Barry Hunter.

Additional information on George Warren is available via the IBCC Losses Database. 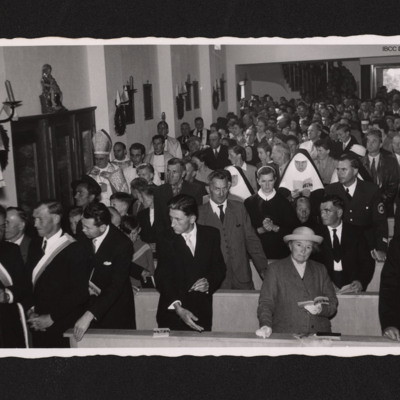 Mrs E Warren at a memorial service for her son in St Leonhard's church. On the reverse is stamped 'Photo Schmid Heilsbronn/Mfr' 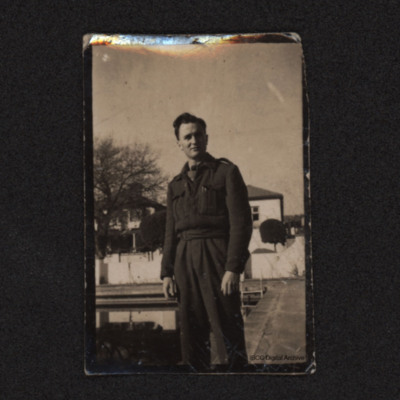 George standing in a garden. 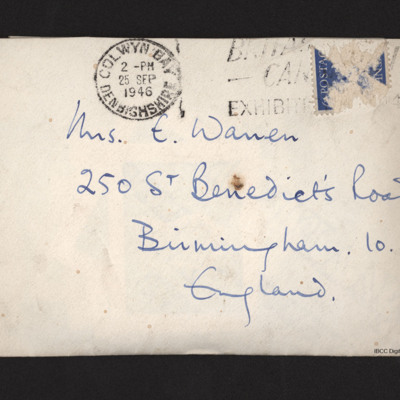 An envelope addressed to Mrs E Warren in Birmingham. 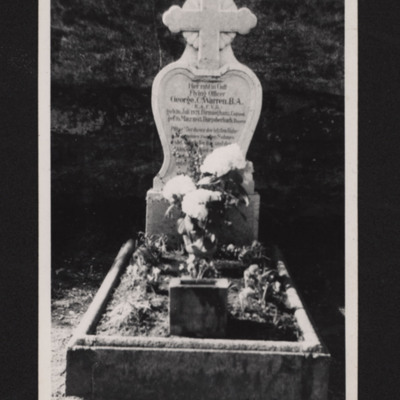 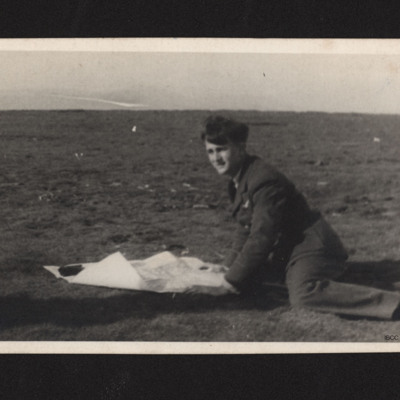 George on a hillside with a map. On the reverse 'Busman's Holiday. Getting a fix on Black Combe S. Cumberland. Scafel range beyond.' 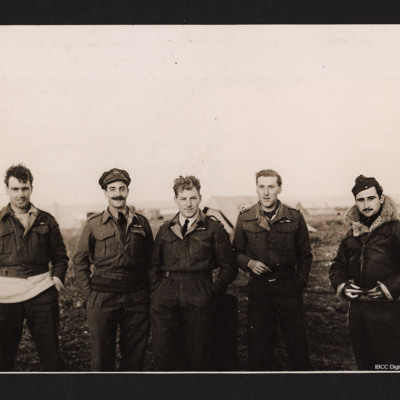 A row of five pilots. Behind are tents. On the reverse 'Subject far right [John Cox?] From Mrs E. Warren Birmingham February 1944 Mother of Kenneth W/O'.

Letter to Mrs Warren and Beryl from Mary Carter 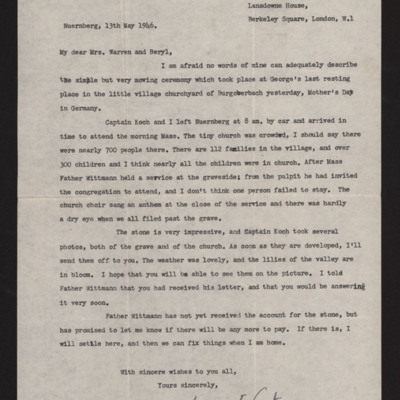 Mary describes the ceremony at the churchyard, attended by nearly 700 people including 300 children. 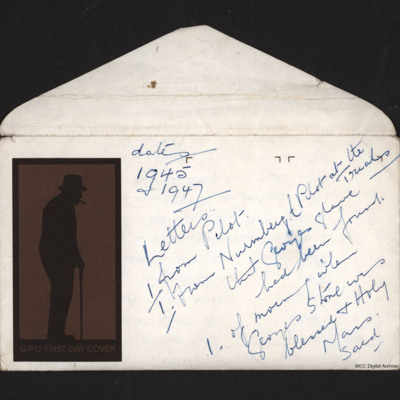 An envelope annotated 'dates 1945 & 1947 Letters 1 from Pilot 1 from Nuremberg / Pilot at the [indecipherable] that George's grave had been found. 1 of [indecipherable] when George's stone was blessed &; Holy Mass said'. 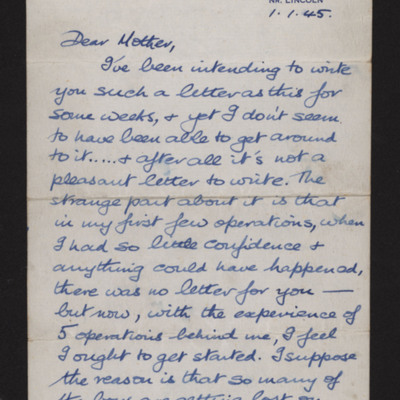 George apologises for not writing because of his sadness on losing so many of his colleagues. It is a sad letter expressing his feeling if he was lost on an operation.

Letter to Miss B Warren from George Warren

The letter describes Georges movements during training. He asks for a few items to be sent to him. He tells his sister about the days he will train. 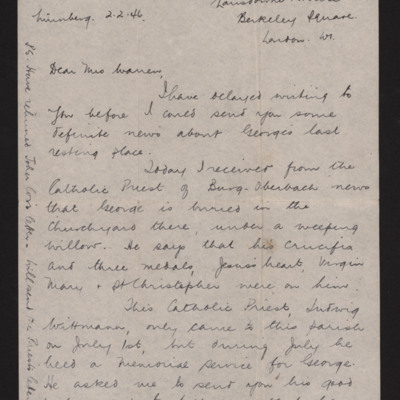 The letter describes contact Mary has made with the priest in charge of the cemetery where George is buried. She includes his address and states that she will try and visit the cemetery in the near future.

John Cox was the pilot the night George was killed. He describes travelling in a vehicle with George's body. George was taken to a cemetery in a village. John continued to a military hospital. George and John had both baled out. 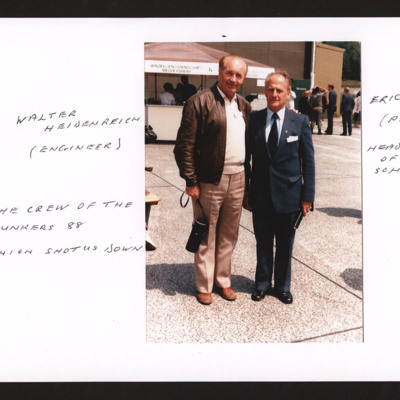 Waletr and Eric standing together. The image is annotated 'The crew of the Junkers 88 which shot us down. Walter Heidenrich (engineer) Eric Jung (Pilot) Headmaster of a school)'.

Crew at Peplow and Operational 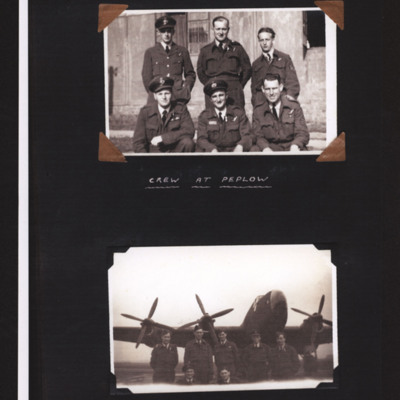 Two photographs on one album sheet.
Photo 1 is six airmen arranged in two rows, captioned 'Crew at Peplow'.
Photo 2 is seven airmen in two rows in front of a Halifax, captioned 'Operational' 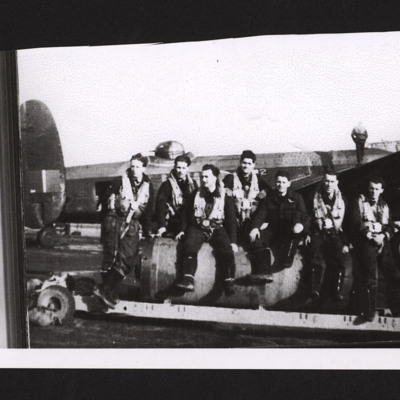 Cessna Bobcat and a Pilot 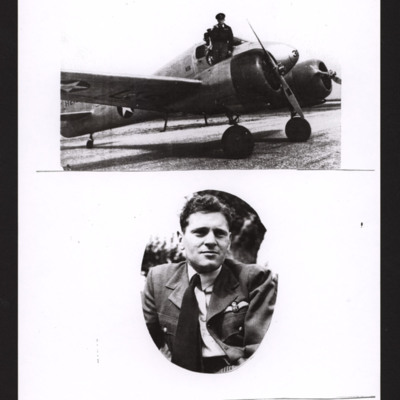 Photo 1 is an airman standing on the starboard wing beside the cockpit of a Cessna Bobcat.
Photo 2 is a half length portrait of an RAF pilot. 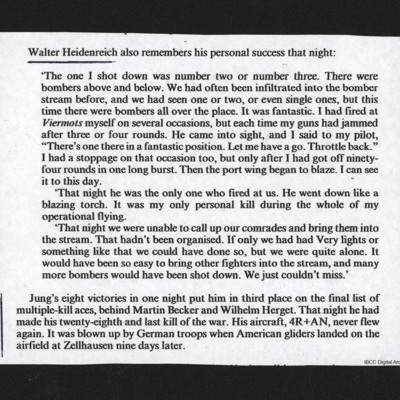 Walter shot down George's aircraft. This is his memoir of the action. 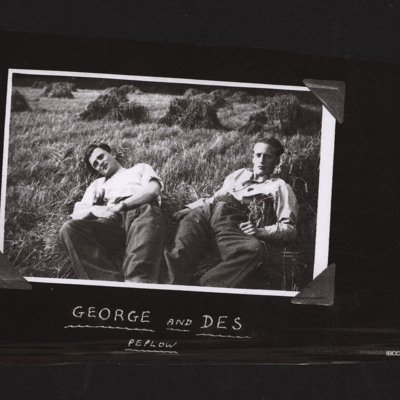 Two airmen resting on a field. It is captioned' George and Des, Peplow'. 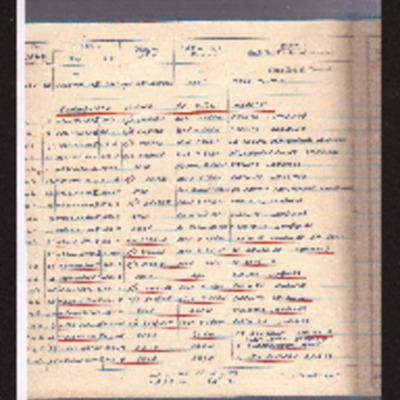 Pilots flying log book for John Cox, covering the period from 28 July 1944 to 16 March 1945. Detailing his flying training and operations flown. He was stationed at RAF Peplow and RAF Wickenby. Aircraft flow in were Wellington and Lancaster. He flew… 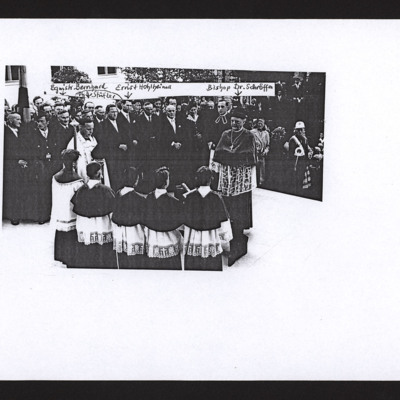 Eight photographs of Ernst and family.
A folder and a letter.
Photo 1 and 4 are the same and are of the ceremony at the church with the priest officiating. Attending are boy choristers and many villagers. Arrowed and aannotated are 'Bgmstr… 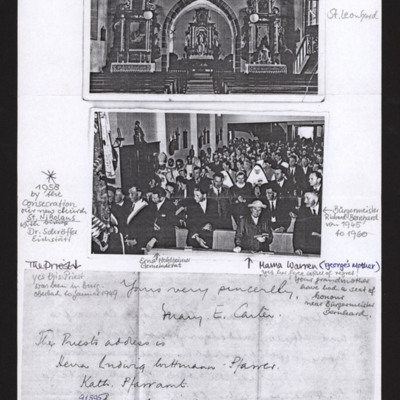 Item 1 is a photo of the inside of St Leonhard's church with an annotated cross indicating where George's grave is.
Item 2 is the crowded interior of the church, annotated '1958 by the Consecration our new church St Nikolaus with bishop Dr.…

George Warren and a Pilot 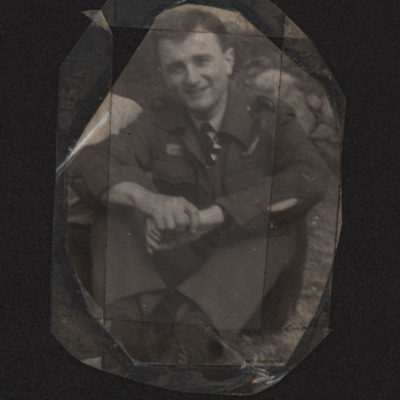 Photo 1 is George Warren in uniform sitting down.
Photo 2 is a pilot and is wearing his flying kit.

Gathering in the Hay 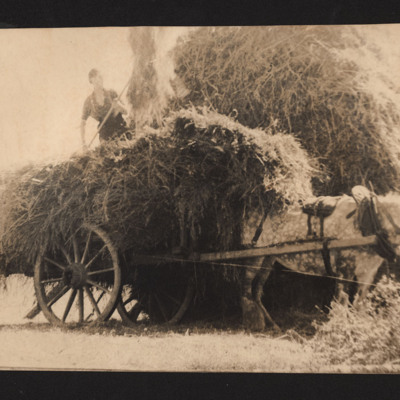 A horse and cart loaded with hay beside a large haystack. A man is loading hay. On the reverse 'Gathering in the wheat Cardiganshire 162041 P/O Warren'. 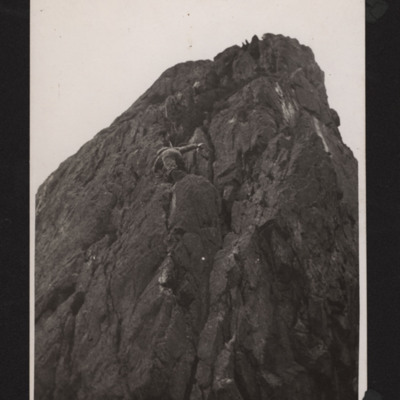 A person climbing a rock outcrop. On the reverse 'At the Bochlwyd Buttress Warren 1580687, RAF'.

Haystacks in a Field 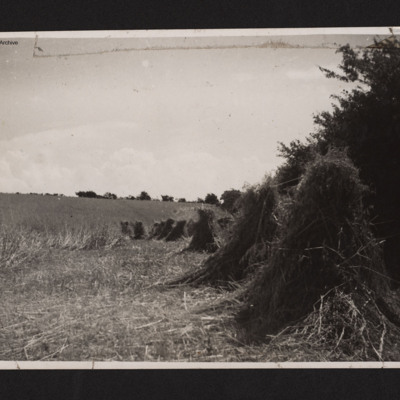 A view of haystacks at the edge of a field. On the reverse is annotated 'Corn in Cardiganshire Pen y wern farm Warren 1580687, RAF'.
View all 47 items