The collection has been loaned to the IBCC Digital Archive for digitisation by Barbara Turner and catalogued by Barry Hunter. A group of veterans lined up in front of a town major and air force officers. Tram cables can be seen on the image. 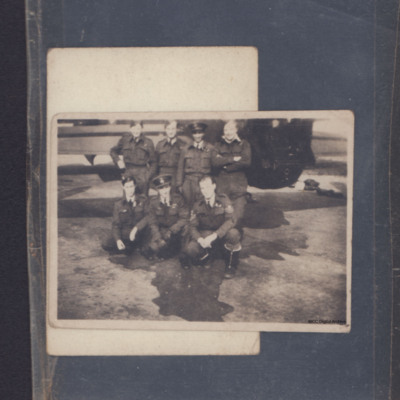 A group of seven airmen in two rows beside the rear gun turret of their aircraft. 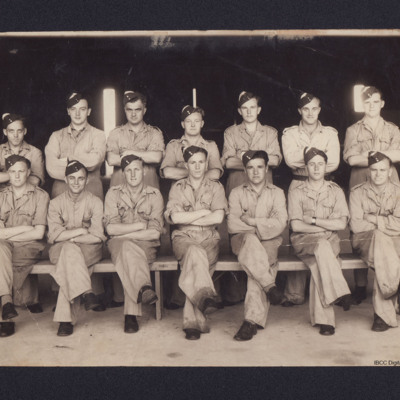 A formal group of 14 trainee airmen in khaki with a trainee flash in their sidecaps. 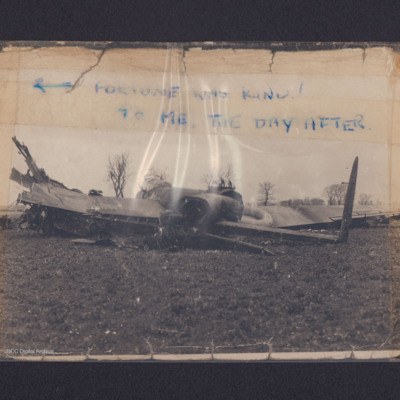 A Lancaster with its fuselage broken into sections in a field. In one photograph a man is sitting in the pilot's seat. The first image is annotated 'Fortune was kind! To me. The day after'.

Five airmen and their Lancaster 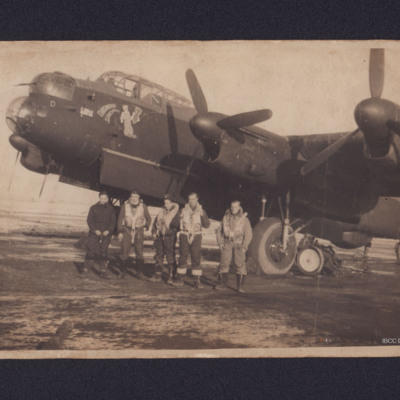 Five airmen arranged at the front of their Lancaster 'D'. The nose art features a cartoon figure holding a bomb. The text is partly indecipherable but the second word is 'Special'.
On the reverse is
'L to R
Jerrie ----
Bob ---- Killed on Ops… 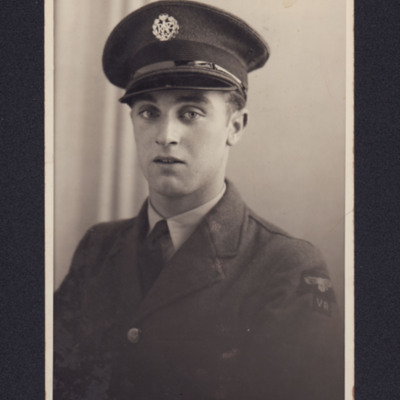 A half-length portrait of Charles Turner whilst a member of the RAF Volunteer Reserve. 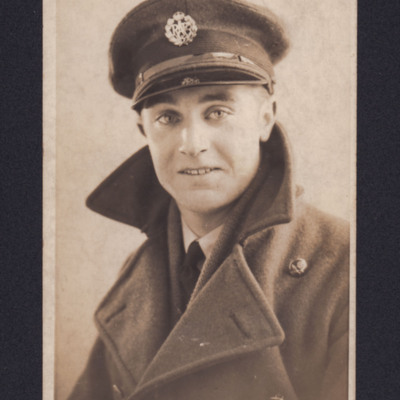 A half-length portrait of Charles Turner in greatcoat and cap. 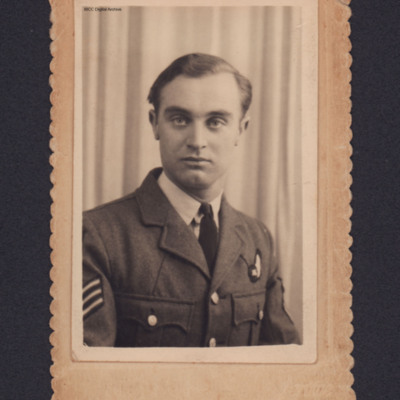 A half-length portrait of Charles in uniform with air gunners brevet. 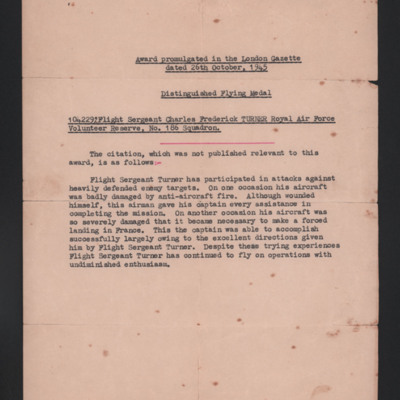 A citation referring to the circumstances of the award of a Distinguished Flying Medal to Charles. 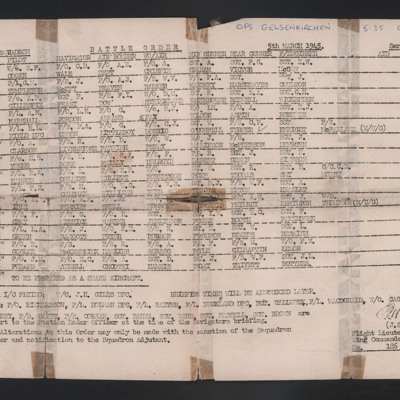 A battle order for 186 Squadron for an operation to Gelsenkirchen. It details each aircraft and all seven crew members for each aircraft. 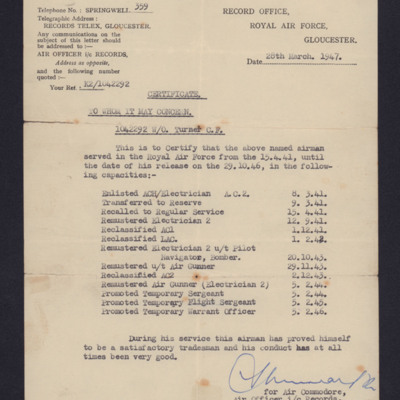 A Certificate detailing Charles' trades and ranks in the RAF with dates, issued by the Record Office. 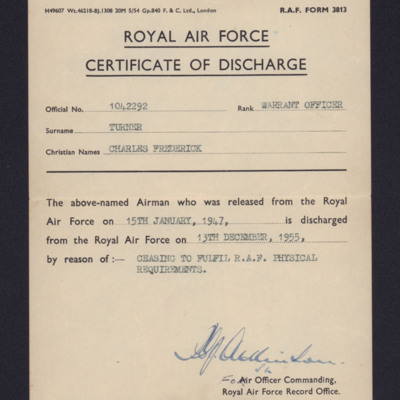 RAF Form 3813 issued to Charles Turner on his discharge from the RAF. 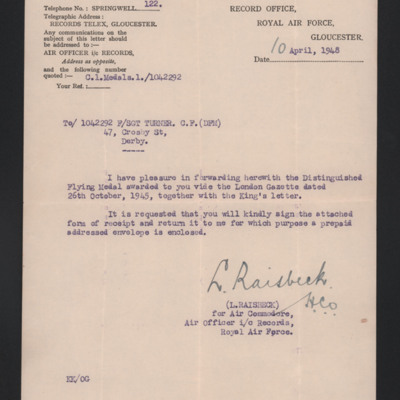 The letter accompanies Charles Distinguished Flying Medal and a letter from the King. 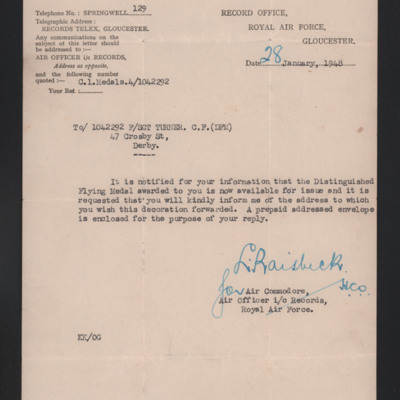 The letter asks Charles where he would like his Distinguished Flying Medal to be sent.

Letter to Charles Turner from the King 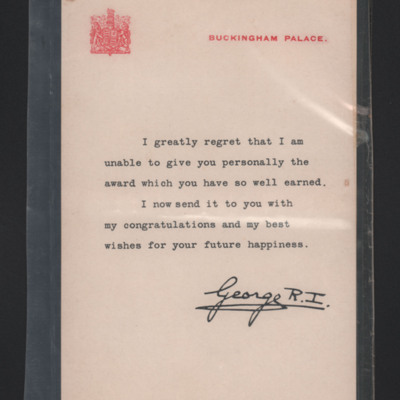 The letter advises Charles of his award of a Distinguished Flying Medal.

Letter to Charles Turner Mother from his Commanding Officer 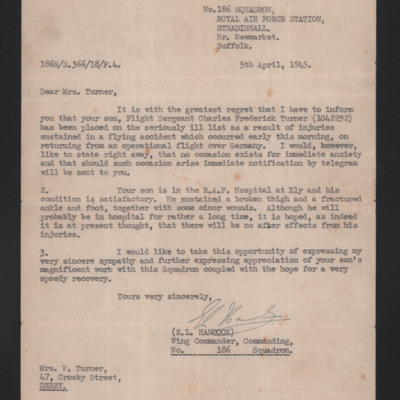 The letter advises Mrs Turner that her son is seriously ill after a flying accident. 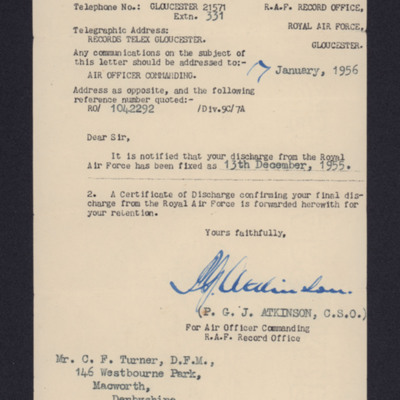 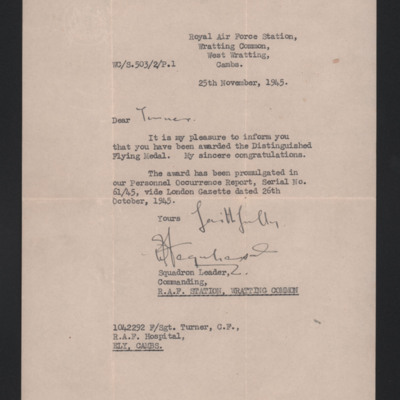 The letter advises Charles that he has been awarded a Distinguished Flying Medal. 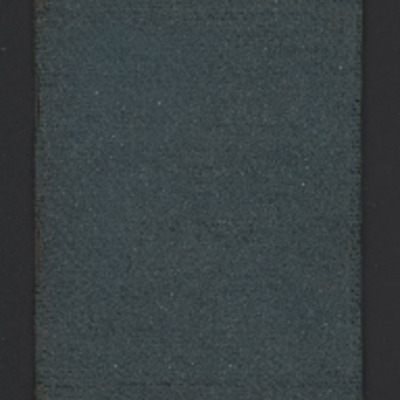 Form 64 issued to Charles Turner in September 1944. It records his trades in the RAF then his inoculations and medical record summary. 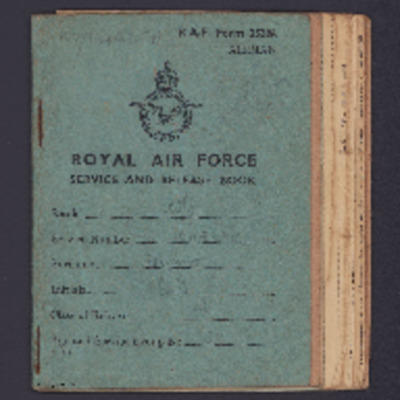 Fifth of His Crew to be Decorated 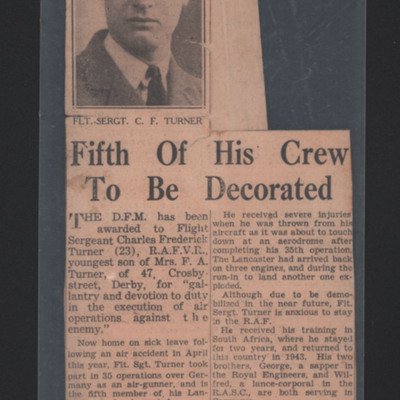 A newspaper cutting announcing that Charles has been awarded a DFM. He completed 35 operations and on the last one his aircraft crashed. 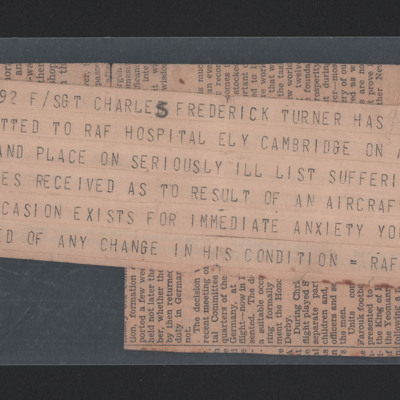 Charles was involved in an aircraft accident and was admitted to hospital. 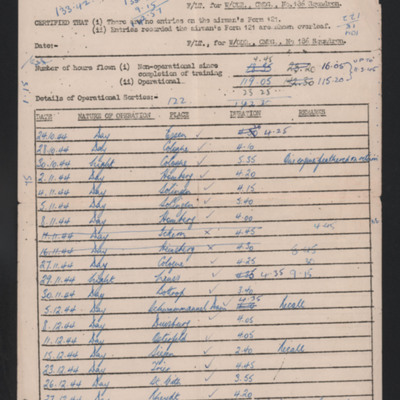 A form filled in for P A Upson, Navigator. It details 26 operations by date, day or night, location and duration. 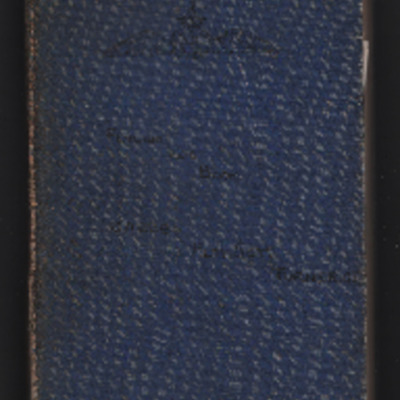 Letter from Charles Turner to his Mother and family 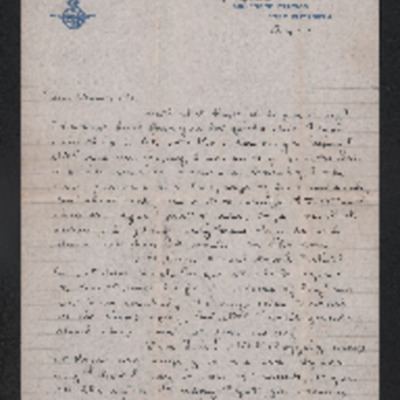 In the letter he complains that his mother hasn't written to him, he misses mild beer, tripe and black pudding. He describes going out for drinks with a WAAF and meeting South African air force pilots and more girls, then they all went for dinner and…
View all 26 items