The collection has been donated to the IBCC Digital Archive by Jim Cahir and catalogued by Barry Hunter. 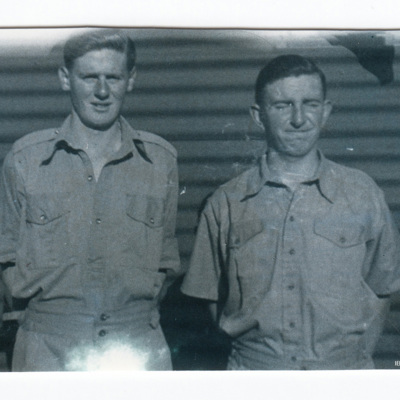 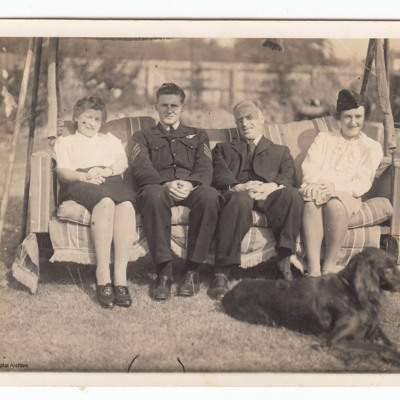 Jim, his brother, sister and sister-in-law seated on a garden swing. A dog is in front of them. On the reverse 'My sister- brother- Jim - sister-in-law Reading Berkshire Oct 1943'.
A second photograph is of the same group in a different order. 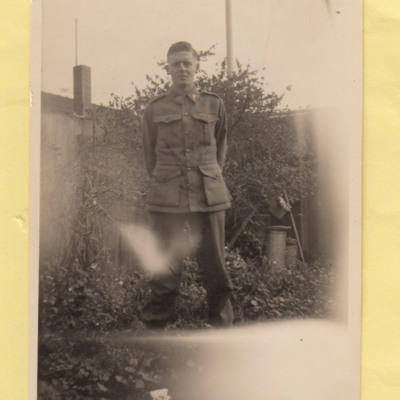 Jim Cahir in CMF uniform. He is standing at ease in a garden. (additional information supplied by donor of collection). 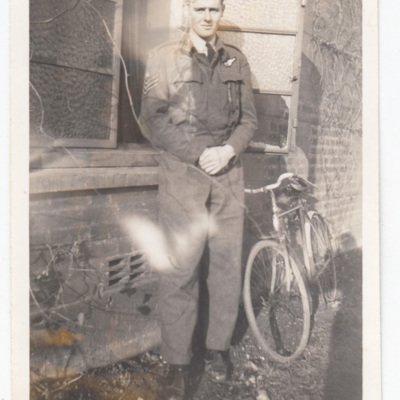 Sergeant Jim Cahir standing beside an open window. Behind is a bicycle. On the reverse is captioned 'Jim Cahir in England 1943 466 Squad Yorks'. 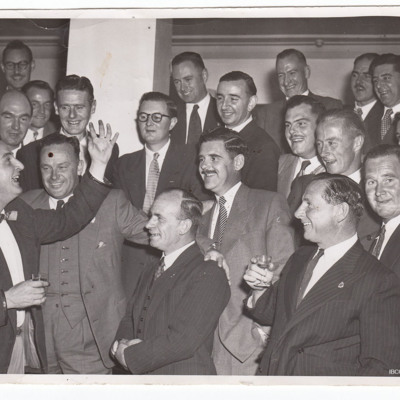 Jim Cahir at a Caterpillar Club reunion. He is one of a group of 19 men. They appear to be watching one man giving a demonstration. On the reverse 'Jim at Caterpillar Club Reunion Circa 1947'. 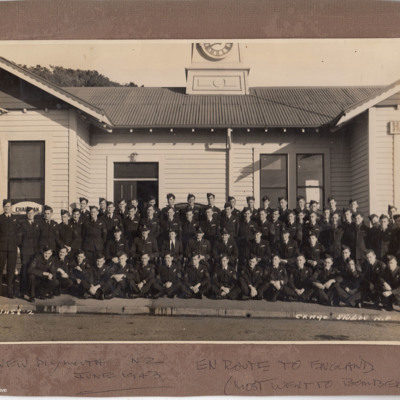 71 airmen arranged in four rows in front of a single story wooden building. It is captioned 'New Plymouth NZ June 1943 En route to England (most went to Bomber Command)'. On the photograph it is further captioned 'IH58.2 Crago Studio N.P.' On the… 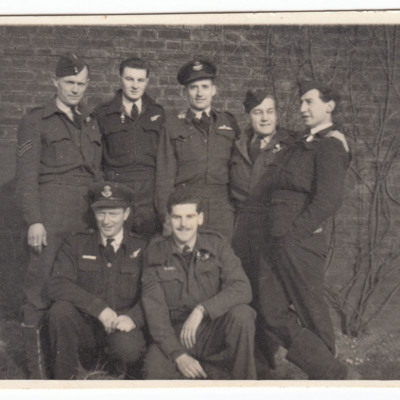 A group of seven airmen arranged in two rows in front of a brick building. On the reverse 'David Purcell & Bill Cashman Leconfield 1943'. 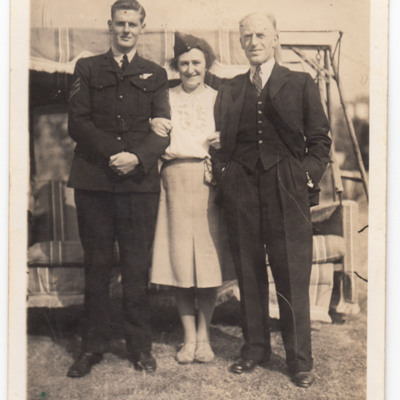 Jim Cahir standing in a garden with his sister and brother. Behind is a garden settee/swing. On the reverse 'Brother, sister & Jim at my sister's home. Berkshire Oct 1943'. 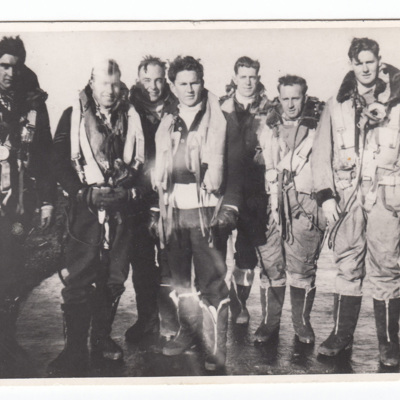 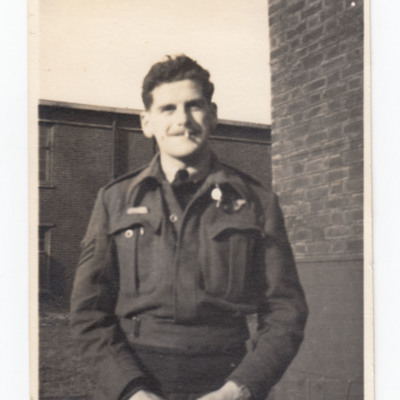 Half length portrait of Bill Cashman in RAF uniform. On the reverse 'Bill Cashman (DFM) Squad 466 1943'. 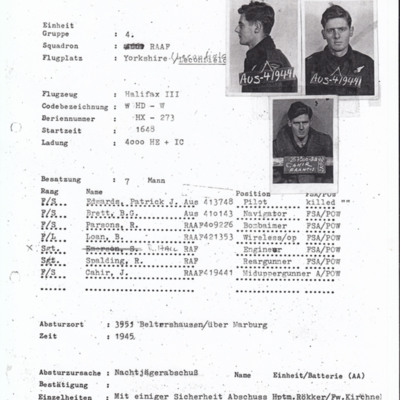 The identity card has three photographs of Jim, his squadron details and his crew.

Certificate for crossing the Equator 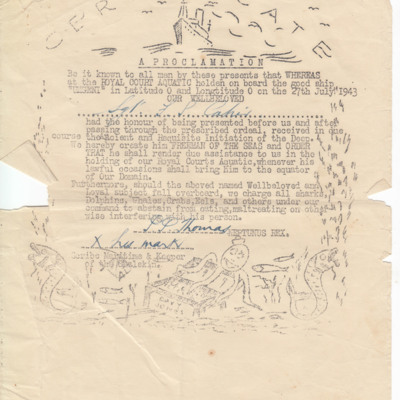 A certificate issued to Jim Cahir for crossing the Equator on his transit to the UK. 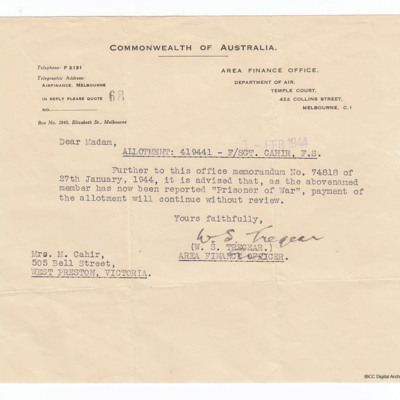 The letter advises Mrs Cahir that because her son is now reported as a prisoner of war then payments will continue without review. 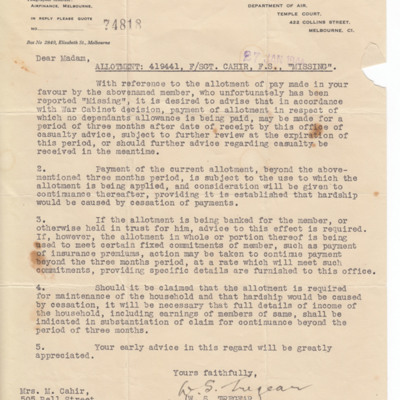 The letter informs Mrs Cahir of payments that will be made to her son whilst he is missing. 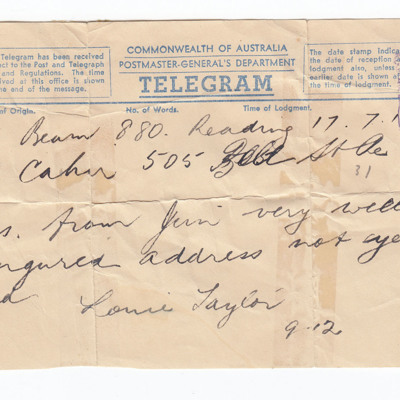 The message advises Mrs Cahir that her son is very well and uninjured. 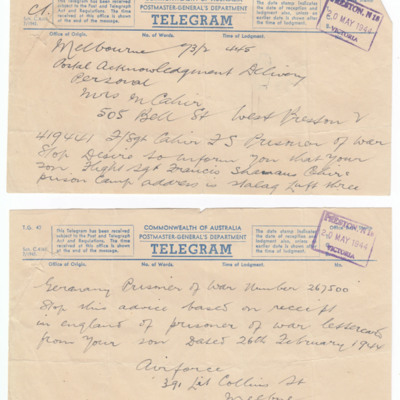 The message advises Mrs Cahir that her son's address is Stalag Luft 3 and his number is 267500. 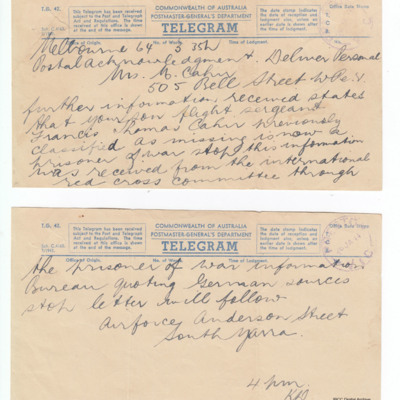 The message advises Mrs Cahir that her son has been reported as a prisoner of war by the International Red Cross.

Telegram to Mrs Cahir from RAAF 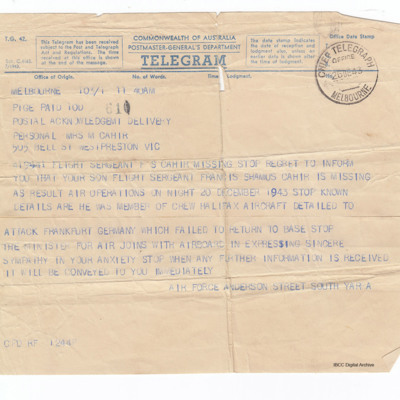 The telegram informs Mrs Cahir that her son is missing in action during an operation at Frankfurt.

Letter to Jim Cahir from the Airboard 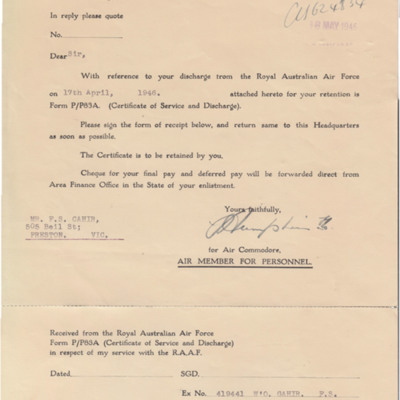 The letter accompanies Jim's Certificate of Service and Discharge. 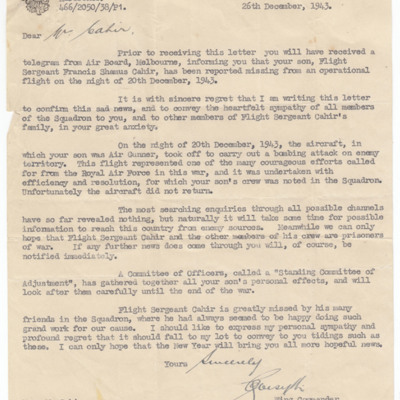 The letter refers to Jim Cahir being reported missing. It explains events on the night he went missing and explains that his personal effects will be carefully stored. 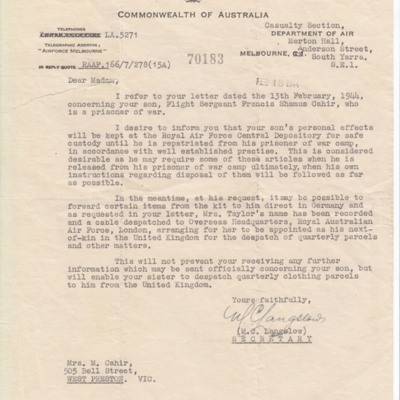 The letter refers to Jim Cahir's personal effects which will be kept in storage until his release from prisoner of war camp. 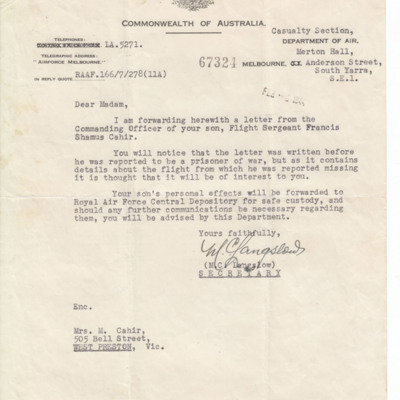 The letter accompanies a letter from Jim's commanding officer.

Letter to Mrs Cahir from the Casualty Section, Ministry of Air 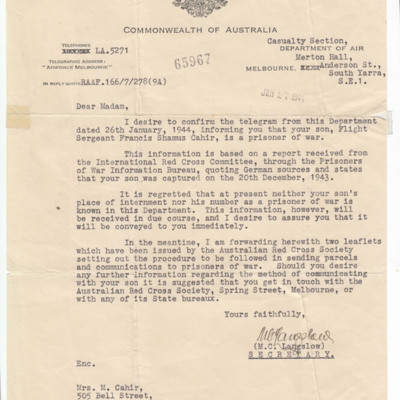 The letter informs Mrs Cahir that her son is a prisoner of war. 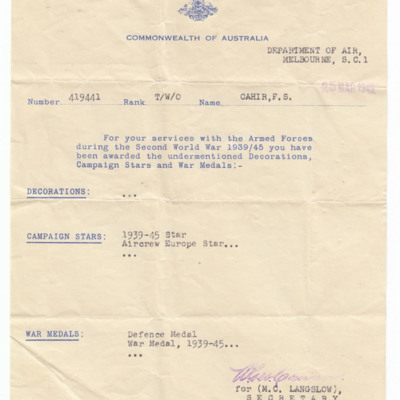 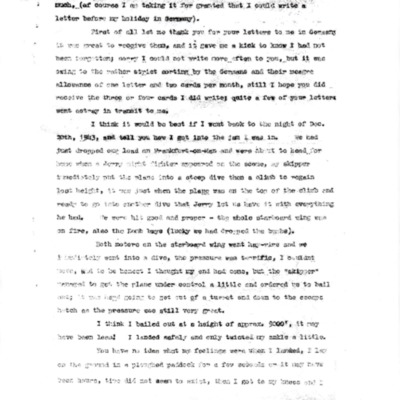 Letter from Jim Cahir to his friend Mary Egan detailing his plane being shot down, his capture and his time in a prisoner of war camp.
View all 32 items