45 items. The collection concerns William Benjamin "Biff" Baker DFC (Royal Air Force) and contains his log book, documents art work and and photographs. He flew operations as an air gunner with 115 and 626 Squadrons.

The collection has been donated to the IBCC Digital Archive by Pamela Baker and catalogued by Nigel Huckins and Peter Adams.

Drawing - aircrew climbing on wing to put out fire 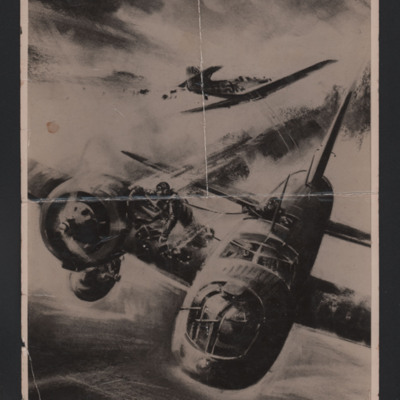 Drawing from front of a Wellington with aircrew out on starboard wing trying to put out fire in engine. Me 109 going the other way above, 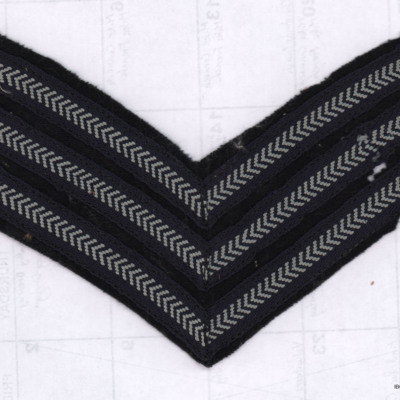 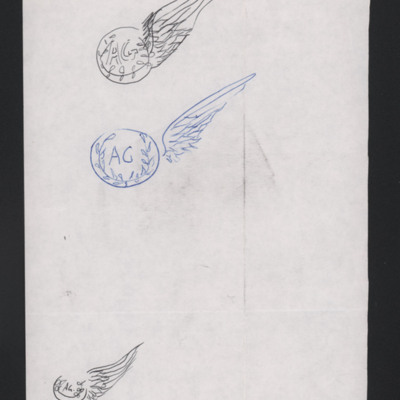 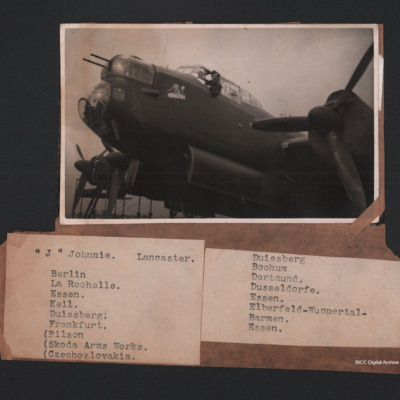 Top - Front quarter view of the front of a Lancaster with gremlin nose art and airman leaning out of cockpit.
Bottom - Notes with list of operations. 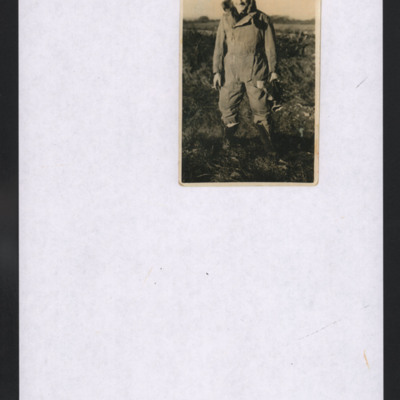 An airman wearing flying suit and boots standing in a field. On the reverse 'All my love to [....], ever yours, Bill xxxxx'. 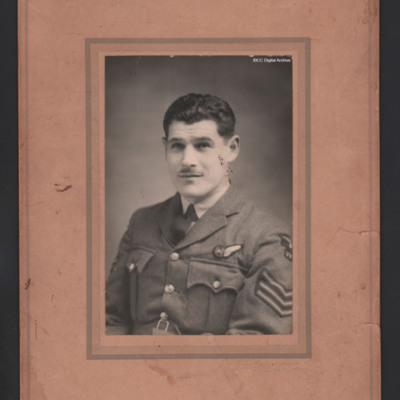 Head and shoulders portrait of an airman wearing tunic with sergeant rank and air gunner brevet. 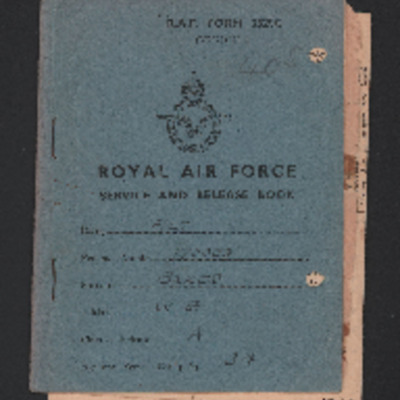 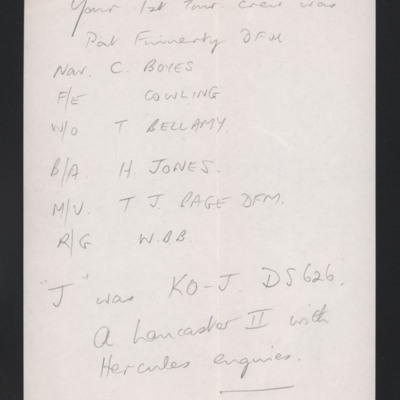 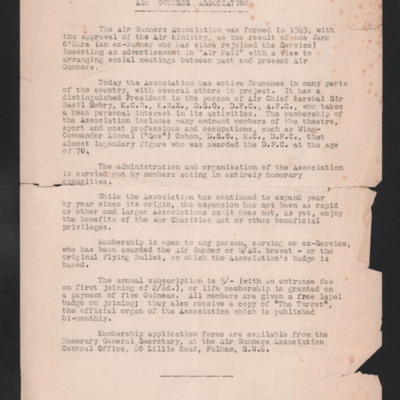 Sets out details of association, history and subscriptions. 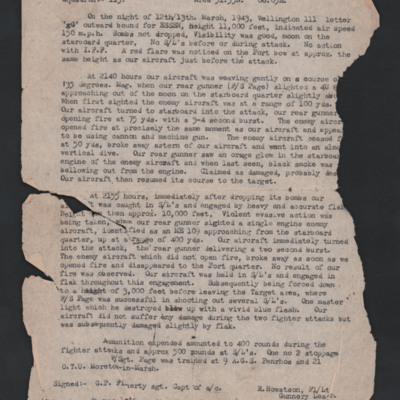 Relates events during operation to Essen on 12/13 March 1943. Enemy fighter attacked and was engaged and hit by rear gunner. Claimed as damaged. After releasing bombs in heavy anti-aircraft fire and searchlights rear gunner engaged Me 109. Gunner… 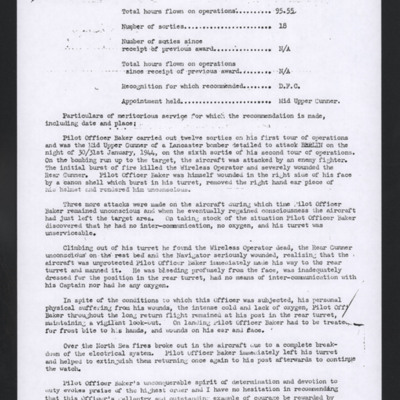 Relates actions on operation to Berlin on 30/31 January 1944. Baker was wounded during night fighter attack. Finding wireless operator dead, the rear gunner unconscious and navigator wounded, he then manned the rear turret despite no communications… 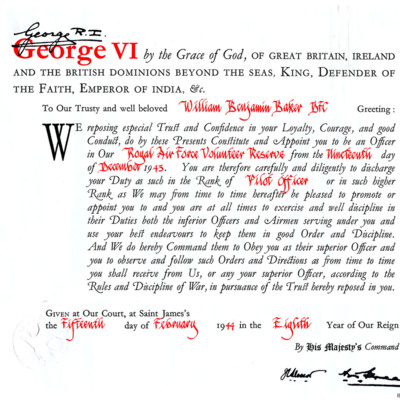 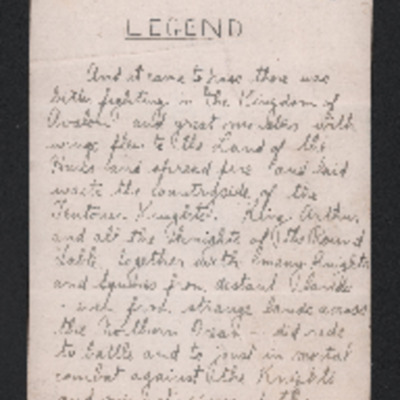 Allegorical story telling story of an operation in terms of knights of medieval Kingdom of Avalon setting out and riding to battle in the land of the Huns and city of Burlyne. Tells story of operation including wounding of crew and return flight.… 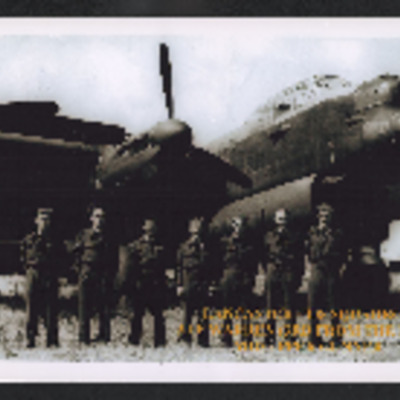 First page - photograph of seven airmen wearing battledress with brevet standing in front of a Lancaster. Captioned 'Lancaster - 138 Squadron, Alf Warren (3rd from the left) mid upper gunner'. Then follows a list of thirty-one operations between 2…

Observers and air gunners flying log book for W B Baker, air gunner, covering the period from 11 November 1942 to 9 June 1944. Detailing his flying training and operations flown. He was stationed at RAF Stormy Down and RAF Wickenby. Aircraft flown in… 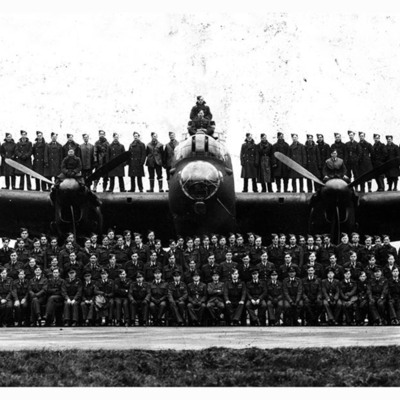 A large group of airmen sitting and standing in three rows in front of a Lancaster and also standing on top of wings. One man sits on each engine and two on top of cockpit. 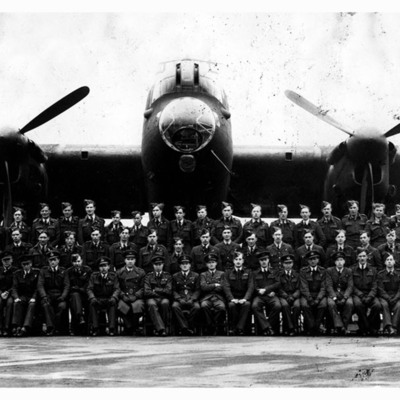 A large group of aircrew sitting and standing in three rows in front of a Lancaster. 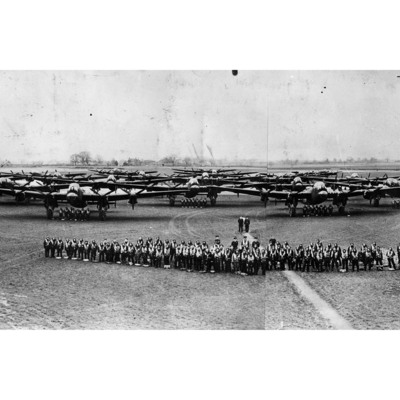 In the foreground a "V" formation of a very large group of aircrew wearing Mae Wests. Further back a large number of Lancasters parked close together with ground crews in line in front those at the front. 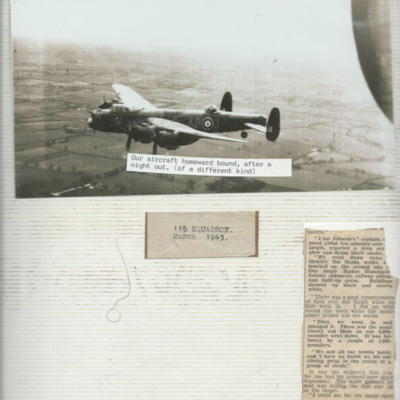 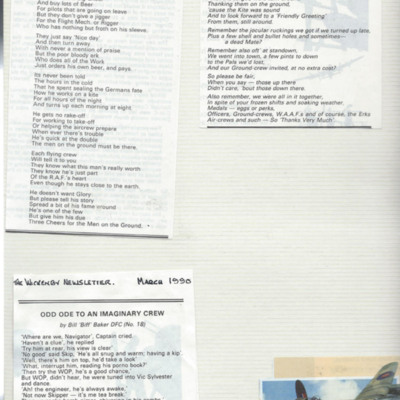 Top left - poem - cheers for the men on the ground by E Sykes 1942. Six verse poem about forgotten ground crew compared to those who fly. Top right - a reply to Mr Sykes ode (newsletter No 26) by 'Bif' Baker (No 18). Letter putting Mr Sykes to rights… 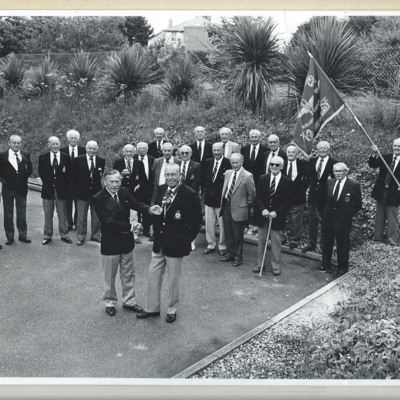 A large group of men wearing blazers standing in a car park. In front one man is being presented with a decoration. One man on left holding up a standard. 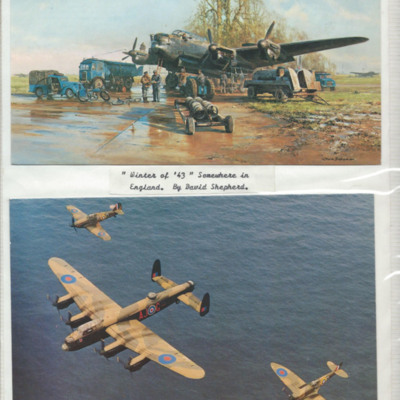 Top - painting of a Lancaster being bombed up. Captioned 'Winter of 43 somewhere in England. by David Shepherd'.
Bottom - photograph - view from above of a Lancaster with Spitfire and Hurricane on either wing over sea. Captioned 'Memorial in Flight,…
View all 45 items