The collection concerns Ronald Henry Boone (1331310, Royal Air Force). It includes five photographs, his personnel record and a record of his operations. Ronald Boone was an air gunner and flew operations with 77 Squadron at Royal Air Force Elvington and then 35 Squadron from RAF Graveley. He was killed when his Halifax was shot down by a night fighter on an operation to Münster 11/12 June 1943.

The collection has been loaned to the IBCC Digital Archive for digitisation by Sandra Jones and catalogued by Nigel Huckins.

Additional information on Ronald Boone is available via the IBCC Losses Database.

Details of six operations carried in Halifax on 35 Squadron at Royal Air Force Graveley in May and early June 1943. Targets include Bochum, Essen, Wuppertal and Munster. States that notes were taken from the National Records Office London. 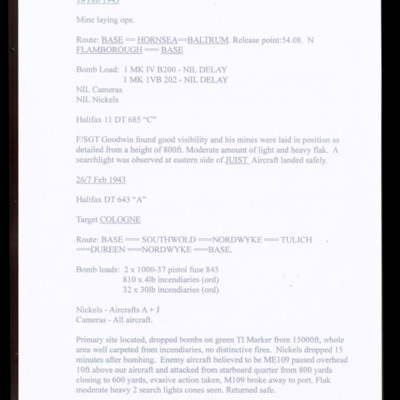 Details of nine operations carried out between February and May 1943 from RAF Elvington on 77 Squadron flying Halifax. Targets include Cologne, Berlin and several in the Ruhr.

20 Airmen in four rows all in uniform and side caps. Front row squatting, second sitting and the rear two standing. Ronald Boone is standing on the far right of the back row. In the background part of a wooden building. On the reverse 'This is our… 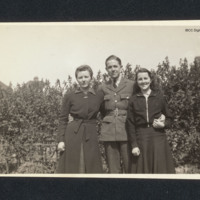 Ronald Boone in uniform flanked either side by his two sisters. In the background tall garden shrubs and house roofs. On the reverse 'Irene, Ronald, Ruby Boone'. 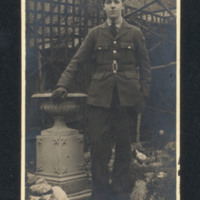 Full length portrait of Ronald Boone in uniform tunic wearing side hat. His right hand is resting on a large stone garden ornament. In the background a lattice fence.

Full length portrait of Ronald Boone in uniform with air gunners brevet and sergeant stripes wearing side cap. In the background shallow steps. Submitted with caption; 'Ronnie with his stripes'.

Additional information on this item was kindly… 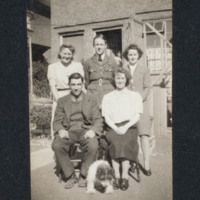 Family portrait of Ronald Boone with his mother, father and two sisters. Mother and father are seated in front in civilian clothes. Behind, Ronald Boone is standing in uniform with air gunners brevet and sergeants stripes, flanked by his two sisters.… 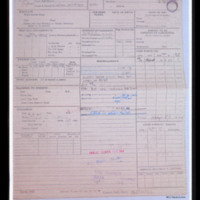 Official record of personal details of Ronald Henry Boone. Noted that he was discharged - killed in action on 12 June 1943 with a total length of service of two years and 163 days. On the reverse details of postings.
View all 8 items