Wynn, Ian Archer
I A Wynn

146 Items. Collection concerns Pilot Officer Ian Archer Wynn (1908 - 1943, 146838 Royal Air Force). After training as ground crew he remustered as a flight engineer and flew operations with 100 Squadron. He was killed 25 May 1943 on an operation from RAF Grimsby to Düsseldorf. Collection consists of a diary, a memorial book, an official report on what was his final operation, photographs of his crew, his family and the squadron as well as official correspondence from Air Ministry and British Red Cross, letters of condolence and a large number of letters from Ian Wynn to his wife Kathleen.

The collection has been loaned to the IBCC Digital Archive for digitisation by Patrick Anthony Wynn and catalogued by Nigel Huckins.

Additional information on Ian Archer Wynn is available via the IBCC Losses Database. 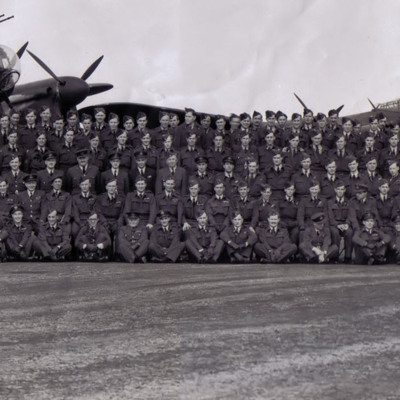 A large group of airmen sitting and standing in five rows. In the background three Lancaster in line. It is believed that I A Wynn is in the photograph as it was taken before 25/26 May 1943. Additional information about this item was kindly provided… 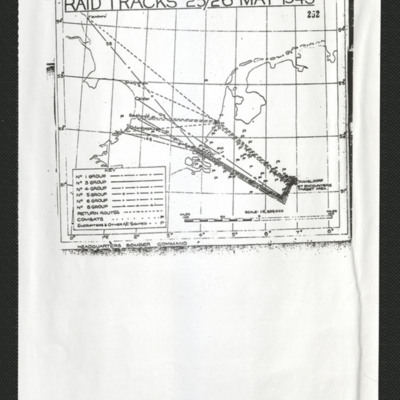 Shows operation tracks for all Groups to Dusseldorf. Shows combats as well as encounters with other aircraft. 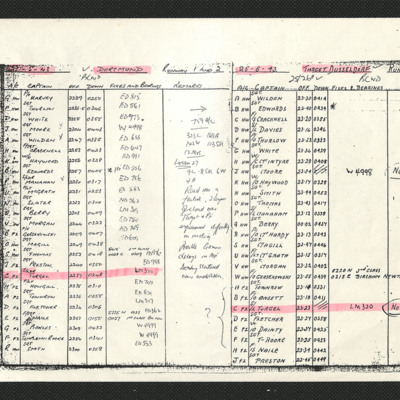 Operation against Dortmund on 23 May 1943 and Dusseldorf on 25 May 1943. List all crews flying. Squadron Leader Turgel's aircraft is highlighted on both operations and on the 25 May 1943, no landing time and a note 'No News'.

Ian Wynn's last will and testament 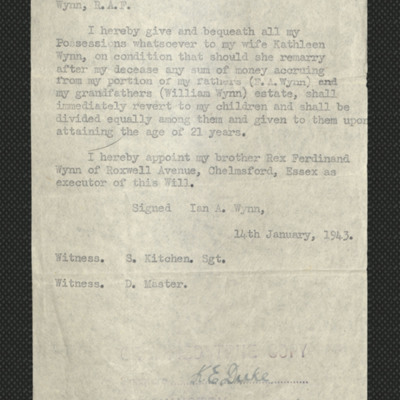 Gives instructions for disposal of his possessions.

Gives notice that her husbands grave will be moved from Venlo to the British Military Cemetery at Jonkersbosch, Nijmegen. Gives details of new graves.

From Air Ministry casualty branch reporting that the Royal Air Force Missing Research and Inquiry Service in Holland had located husband's grave in Venlo. Goes on to describe graves of aircrew recovered from same crash. Mentions some facts about…

From Air Ministry casualty branch reporting that the Royal Air Force Missing Research and Inquiry Service in Holland had located husband's grave in Venlo. Goes on to describe graves of aircrew recovered from same crash. Mentions some facts about… 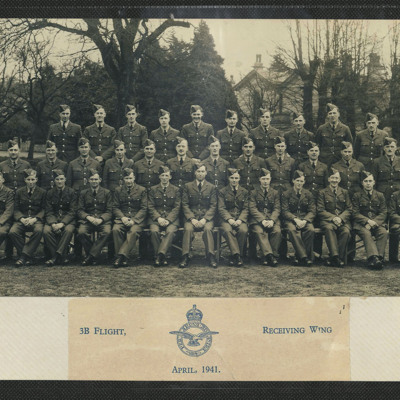 Thirty-seven airmen wearing tunic and side caps sitting and standing in three rows. In the background trees and buildings. Captioned '3B Flight, Receiving Wing, April 1941'. On the reverse 'Padgate or Babbacome, Ian A Wynn, back row 2nd from right'. 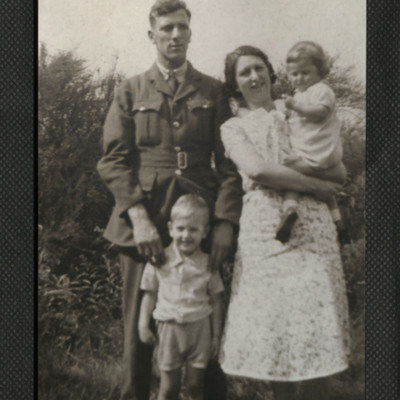 On the left a serviceman wearing tunic with his hands on the shoulders of a young boy in shorts and shirt standing in front of him. On the left a lady wearing dress and holding a baby. On the reverse 'Ian Wynn, Kathleen, David and Tony (Patrick…

Informs her that a war gratuity was payable in respect of Ian Wynn's service. 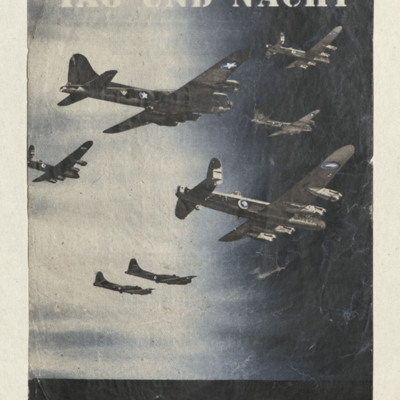 On the front 'Tag und Nacht' and formation of B -17 and Lancaster bombers. On the reverse German text.

They advise her not to correspond to her husband until it is established whether he is a prisoner of war.

Gives details of the outturn of service estate of the late Pilot Officer I A Wynn and total was £40 9s 11d. Payable order would be sent in a few days. 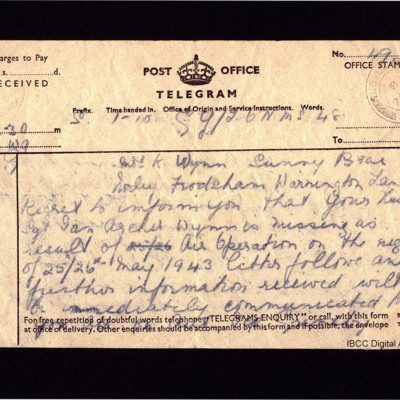 Informs her that her husband is missing as a result of air operations on 25/26 May 1943.

Letter from Barbara to Kath 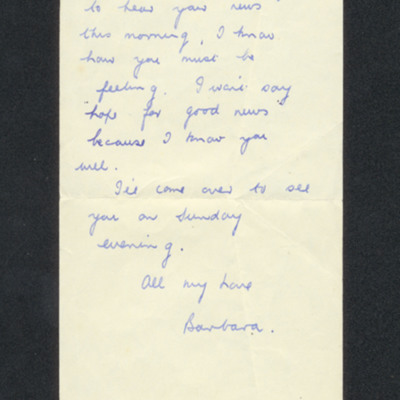 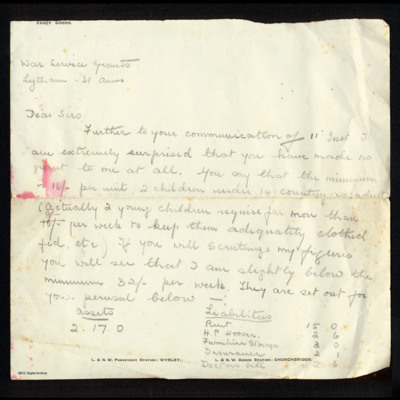 Kathleen Wynn is surprised she has received no grant and lays out what she would expect with two children under 14 years old. Points out that it is unfair for someone who has a husband on active duties to be worse off than another with a husband… 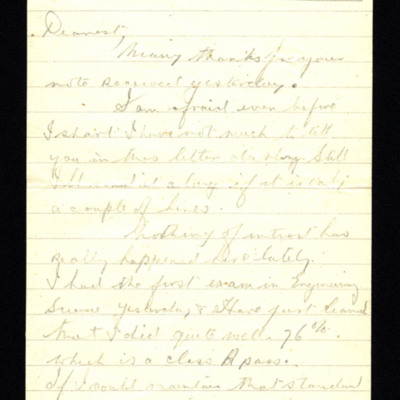 Writes about exams and that he probably could get a commission. Comments on the course he is doing and the quality of the food. Catches up with family and acquaintance news.

He is worried about his son David. Catches up with other family news. 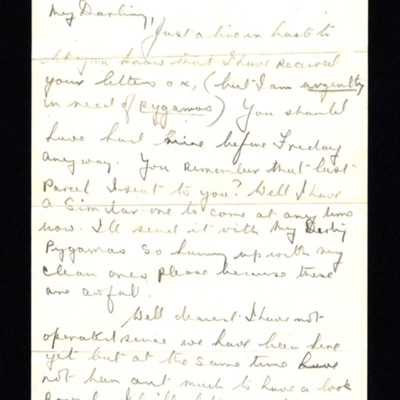 He writes about needing some clean pyjamas. Mentions he has not been operating since he arrived at RAF Grimsby but in addition, he has not been able to get out. Catches up with family news. 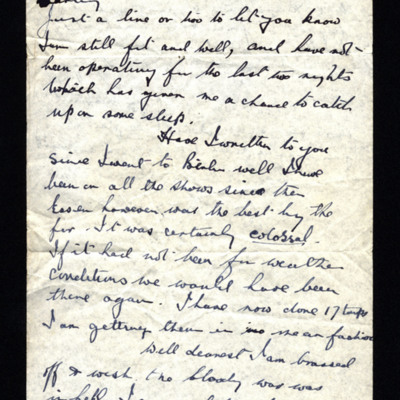 Ian writes about his operations to Berlin and Essen and that he hates the war. Mentions he has now done 17 operations. Catches up with family news. 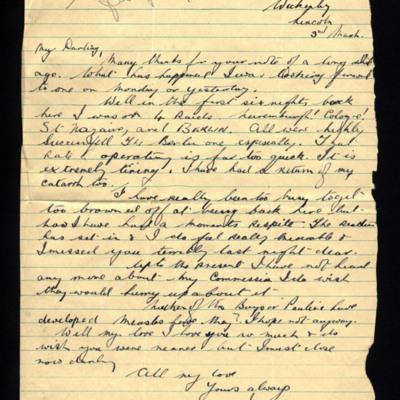 He writes about how he is miserable and missing her. He has been on four operations to Nuremberg, Cologne, St Nazaire and Berlin since he returned from leave. Mentions he has not heard about his commission. 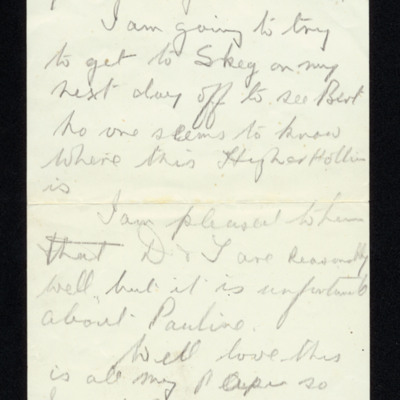 He writes about an operation to St Nazaire he was on the previous night and due to the weather 16 Lancaster’s had to land at RAF Pershore. He hopes his boys are feeling better and he wants to go to Skegness on his next day off. This was Ian… 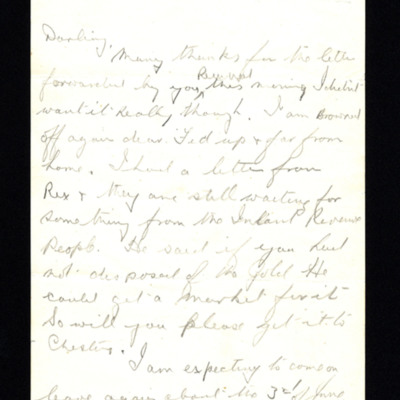 Catches up with family news. Writes of new flight and aircrew taking ground crew for a drink in Grimsby along with an amusing incident. Reminisces and thinks about after the war. 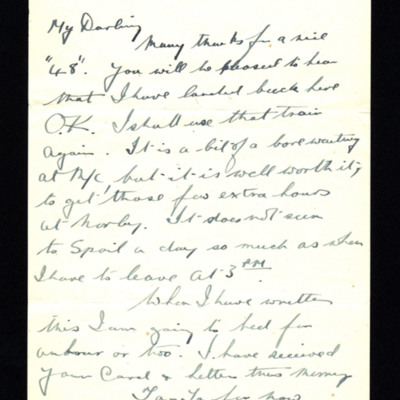 Writes of short leave and train journey.
View all 146 items