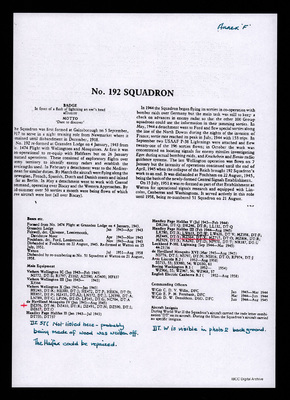 History from formation on 5 September 1917 until 1958. Includes bases, aircraft and commanding officers.

[missing letter]he Squadron was first formed at Gainsborough on 5 September, [missing number]917 to serve in a night training role from Newmarket where it [missing letter]mained until disbandment in December, 1918.

In 1944 the Squadron began flying its sorties in co-operation with bomber raids over Germany but the main task was still to keep a check on advances in enemy radar so that the other 100 Group squadrons could use the information in their jamming sorties. In May, 1944 a detachment went to Ford and flew special sorties along the line of the North Downs during the nights of the invasion of France; sortie rate reached its peak in July, 1944 with 153 trips. In September two USAAF P-38 Lightnings were attached and flew twenty-one of the 196 sorties flown; in October the work was concentrated on locating signals for enemy missiles investigating [italics] Egon [/italics] during actual bombing raids, and [italics] Knickerbein [/italics] and [italics] Benito [/italics] radio guidance systems. The last Wellington operation was flown on 7 January but the intensity of operations continued until the end of April, 1945 when the collapse of the Reich brought 192 Squadron’s work to an end. It was disbanded at Foulsham on 22 August, 1945, being the basis of the newly-formed Central Signals Establishment.

On 15 July, 1951 it was re-formed as part of the Establishment at Watton for operational signals research and equipped with Lincolns, Canberras and Washingtons. It served actively in this role until 1958, being re-numbered 51 Squadron on 21 August.

[inserted] DZ376 Not listed here – probably being made of wood was written off. The Halifax could be repaired. [/inserted]