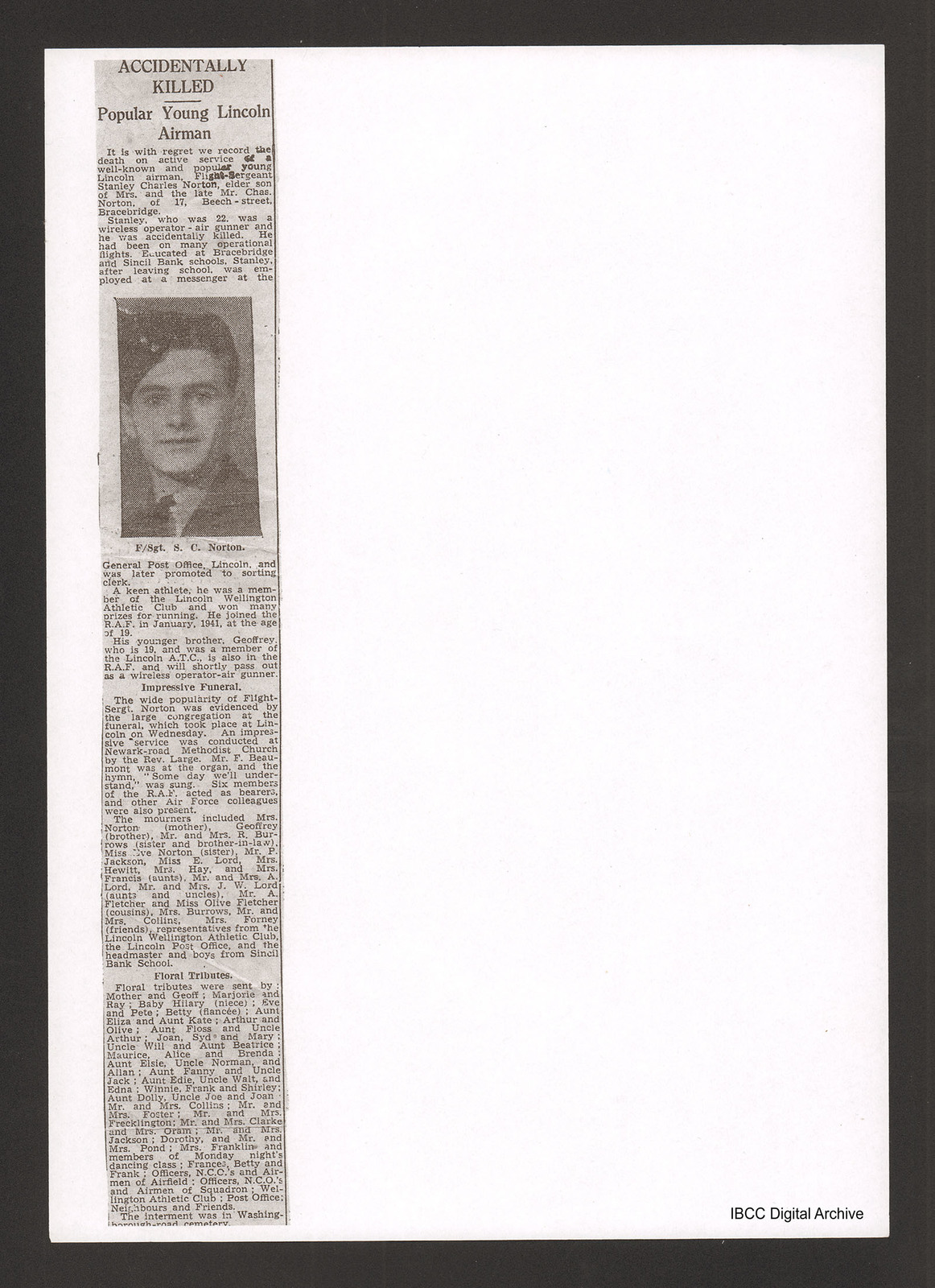 A newspaper cutting announcing the death of Stanley Norton. There is a brief description of his life before and during the war. There are details of his funeral at Lincoln and floral tributes.

It is with regret we record the death on active service of a popular young Lincoln airman, Flight-Sergeant Stanley Charles Norton, elder son of Mrs. and the late Mr. Chas. Norton, of 17, Beech-Street, Bracebridge.
Stanley, who was 22, was a wireless operator – air gunner and he was accidentally killed. He had been on many operational flights. Educated at Bracebridge and Sincil Bank schools, Stanley, after leaving school, was employed as a messenger at the General Post Office, Lincoln, and was later promoted to sorting clerk.
A keen athlete, he was a member of the Lincoln Wellington Athletic Club and won prizes for running. He joined the R.A.F. in January, 1941, at the age of 19.
His younger brother, Geoffrey, who is 19, and was a member of the A.T.C., is also in the R.A.F. and will shortly pass out as a wireless operator-air gunner.
Impressive Funeral.
The wide popularity of Flight-Sergt. Norton was evidenced by the large congregation at the funeral, which took place at Lincoln on Wednesday. An impressive service was conducted at Newark-road Methodist Church by the Rev. Large. Mr. F. Beaumont was at the organ, and the hymn, “Some day we’ll understand.” was sung. Six members of the R.A.F. acted as bearers, and other Air Force colleagues were also present.
The mourners included Mrs. Norton (mother), Geoffrey (brother), Mr. and Mrs. R. Burrows (sister and brother-in-law), Miss Eve Norton (sister), Mr. P. Jackson, Miss E. Lord, Mrs Hewitt, Mrs. Hay, and Mrs. Francis (aunts). Mr. and Mrs. A. Lord, Mr. and Mrs. J.W. Lord (aunts and uncles), Mr. A. Fletcher and Miss Olive Fletcher (cousins), Mrs. Burrows, Mr. and Mrs. Collins, Mrs. Forney (friends), representatives from the Lincoln Wellington Athletic Club, the Lincoln Post Office, and the headmaster and boys from Sincil Bank School.
Floral Tributes.
Floral tributes were sent by : Mother and Geoff; Marjorie and Ray; Baby Hilary (niece); Eve and Pete; Betty (fiancée); Aunt Eliza and Aunt Kate; Arthur and Olive; Aunt Floss and Uncle Arthur; Joan, Syd and Mary; Uncle Will and Aunt Beatrice; Maurice, Alice and Brenda; Aunt Elsie, Uncle Norman, and Allan; Aunt Fanny and Uncle Jack; Aunt Edie, Uncle Walt and Edna; Winnie, Frank and Shirley; Aunt Dolly, Uncle Joe and Joan; Mr. and Mrs. Collins; Mr. and Mrs. Foster; Mr. and Mrs. Frecklington; Mr. and Mrs. Clarke and Mrs. Oram; Mr. and Mrs. Jackson; Dorothy, and Mr. and Mrs. Pond; Mrs. Franklin and the members of Monday night’s dancing class; Frances, Betty and Frank; Officers, N.C.O.’s and the Airmen of Airfield; Officers, N.C.O.’s and Airmen of Squadron; Wellington Athletic Club; Post Office; Neighbours and Friends.
The Internment was in Washingborough-road cemetery.