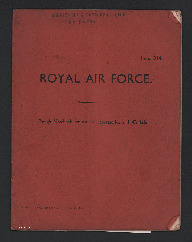 Contains: notes on physics of force and moments with formulae and calculations. Notes on chemistry of fuels, requirements for carburettor,. Continues with mechanics of stress and properties and chemistry of metals. Continues with geometry and drawing followed by physics of magnetism. Then is included part of a letter to Sheila followed by notes on metal alloys diagrams and graph.

Rough Notebook for use in Laboratories and Workshops.

1/ Is a compound of iron & carbon called ferric carbide.

2/ is a laminated structure of cementite & ferride [one indecipherable word] it is the eutectoid of steel.

Solid solution is an intimate mixture of one substance dissolved in another in the solid state.

Austerate is a solid solution of cementate [sic] in it is formed when steel is heated where the upper vertical points critical or change points are these temperatures at which structural changes take place in the solid metal. Lower critical points if the temp at which the change from [one indecipherable word] steel to austenite begins (also called A.C. 1)

Upper critical point is the temp. at which the above change is complete (also called A.C. 3)

Decealascent [sic] points are the change points observed on testing the metal which appears to glow less brightly at these temperatures.

Recealascent [sic] points are change points observed on cooling the metal which appears to glow more brightly at these temps.

E is that alloy which changes completely from solid solution to normal perlite [sic] solution (or vice versa) at a temp lower than any other carbon steel it has only one critical point for example 84% carbon steel or perlite. [sic]

[underlined] FORCE:- [/underlined] is that which will cause a body to move faster or to move slower.

The unit of force in British engineering practise is the [underlined] pound weight. [/underlined]

The pound weight is the force exerted by gravity on a mass of 1lb.

It is required to find the value of x

Where must a 2lb weight be placed between B & C so that the lever is just kept horizontal.

The weight of the lever is 5lbs. Find the reaction on each support.

[underlined] Power:- [/underlined] is the rate of doing work, WORK DONE PER SECOND or WORK DONE/TIME.

An aeroplane weighing 5 tons rises through a vertical distance of 1000 ft. in 5 mins. What [inserted] extra [/inserted] power is the aircraft developing during ascent?

[underlined] Horse power:- [/underlined] is the rate of doing 550 ft. lbs. of work per second.

N.B. The efficiency is always less than 1

Efficiency = Work got out/Work put in

Density = Wt. of 1 cu.ft of substance

Specific gravity = wt. of substance/wt. of equal substance of water.

Pressure = Force per unit are (lbs. per sq. inch)

A/ [underlined] Chemically correct [/underlined] - ideal, worked out from chemical equation (15 : 1 for petrol).

Density of a gas varies with pressure & varies inversely with temperature.

[underlined] Over. Rich [/underlined] - 1/ take - off. Extra fuel for cooling, to prevent detonation.

5/ [underlined] High anti-knock value:- [/underlined] can be raised by

1/ the liquid fuel must be broken up as far as possible and thoroughly mixed with the air.

2/ in normal working conditions a constant mixture strenght [sic] must be maintained.

3/ a rich mixture must be supplied for idling.

4/ extra fuel must be supplied during acceleration.

5/ provision must be made for weakening the mixture when cruising at reduced power.

6/ provision must be made for enriching the mixture for max. power & take off.

7/ means must be provided for preventing the mixture from becoming richer with increase in altitude.

8/ ice must be prevented from forming within the carburettor.

9/ as far as possible the carb. should be automatic, simple to adjust, & robust enough to remain in adjustment under service conditions.

1/ To increase the power of an engine of given size & weight.

2/ To maintain the sea-level power up to a high altitude.

[underlined] STRESS [/underlined] When a body is acted upon by a force These forces are called stress.

Stress is measured as internal force per unit [deleted] measure [/deleted] [inserted] area, [/inserted] & so measures the tendency to break.

[underlined] Strain [/underlined] when a body is acted upon by a force it is deformed. This deformation is called strain.

[underlined] Elasticity. [/underlined] If strain dissappears [sic] when the force is removed the body is elastic.

[underlined] Proof Stress:- [/underlined] the test piece is subjected to a specified stress for 15 secs. The stress is removed & if there is no permanent deformation the yield point must be higher than the applied stress.

Steel when heated undergoes several changes of internal structure which affect it properties. These changes in the reverse order take place on cooling only if a cooling is slow. The various changes take place at fairly well defined temps. Steel should be heated slowly. Do not insert directly into the furnace.

1/ To relieve the stresses set up by previous work, such as forging & bending &

2/ To produce a good internal structure.

[underlined] Method:- [/underlined] heat to a cherry red heat & cool as slowly as possible N.B. The best way is to allow steel & fire to cool together, or to bury steel in the hot ashes.

1/ To produce a maximum hardness.

[underlined] Method:- [/underlined] heat to a cherry red & cool very rapidly by quenching in water, or oil, which is less drastic.

The rapid quenching prevents the usual change of structure & traps the steel in a hard intermediate form. This form is only stable providing

[underlined] Method:- [/underlined] Reheat to the temp. appropriate to the purpose of the two & quench.

If more than 1.8% carbon then you get cast iron. Cast iron used for piston rings, because of its high elasticity, good wearing, self-lubricating.

1/ Up to .25% carbon is always called low carbon or mild steel

All known as straight steels as there is no alloy present in them.

As the percentage of carbon increases the hardness & tensile strenght [sic] increases but the material becomes more & more brittle.

Impurities of carbon steel:- all classes of carbon steel contain small quantities of silicon sulphur & phosphorus. Sulphur causes brittleness & tensile strength. The ill-effects of sulphur eliminated by adding .5 to .7% manganese, which combines with the sulphur to form anon injurious product.

[underlined] Alloy Steels [/underlined] Their strength depends more on their structure & composition than on the hardness produced by special heat treatments as in the case of carbon steels.

[underlined] Invar [/underlined] Contains 36% nickel & is an austenitic steel i.e. critical points are below room temp. It has a low coefficient of expansion & is thus used for precision instruments.

[underlined] Nickel Chrome Steels [/underlined] When alloyed together they give increased strength & hardness combined with greater toughness & ductility. These steels must be quenched to avoid brittleness.

1/ [underlined] To disect an angle. [/underlined]

2/ [underlined] To draw a perpendicular to a line. [/underlined]

7/ [underlined] To divide a line into 7 equal parts [/underlined]

8/ [underlined] To draw a square on given base line. [/underlined]

9/ [underlined] To contruct [sic] a regular hexagon. [/underlined] (2” across corners)

Unlike poles attract each other.

A magnet is surrounded by

Soft iron is easily magnetised & demagnetised & is more permeable to magnetic lines of force than air.

This means that when a piece of soft iron is placed in a magnetic field, the lines of force crowd into the iron increases the magnetic flux & the iron becomes a temporary magnet. The iron loses its magnetic properties on being removed from the field.

[underlined] Electricity [/underlined] An electric current is a flow of electrons.

Will lose electrons when a force is applied. This is called an Electro Motive Force (EMF) & is measured in volts.

There must be a [underlined] potential difference [/underlined] or pressure difference between the terminals of a battery or a storage cell, before a current flows through a circuit.

This P.D. is also measured in volts.

(2) Secondly on the lenght [sic] of conductor.

(3) on the thickness of conductor.

Many thanks for your last letter. You’re nearly as bad as Den, it took him two weeks to reply to my letter it took you ten days. I thought you weren’t going to write back. Not that it worried me!

At the moment a Flt. Lieut. is giving us a lecture on something or other, I don’t know what because I’m not listening.

Staybright (High chromium, high nickel steel) 188 Steel 18% chrome 8% nickel This is more resistant to corrosion, is austenetic [sic] & so can’t be hardened by quenching. Hardened by cold working. Non-magnetic. Very tough & difficult to machine. Resistant to sealing at high temperature & no tendency to harden on cooling. Is used for aero-engine valves. Chromium is key element in valve steels

Tungsten is the base of all high speed tool steels (i.e. steels which retain their cutting edge to a dull red heat & also permit of heavy rapid machining operations in which a straight carbon steel would be completely softened. Tungsten raises the critical points (almost double)

Silicon is not a metal but behaves as one in steel alloys. It is present in all steels up to .33% as an impurity, gives fatigue resisting properties This good quality is increased if alloyed with manganese Silver. manganese steels are used for laminated springs.