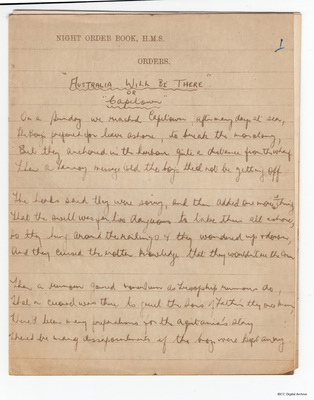 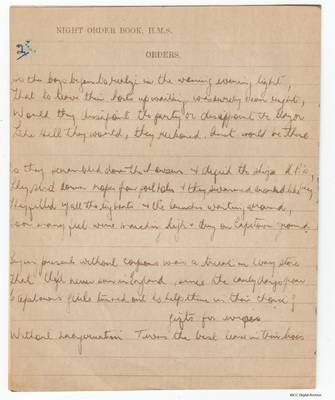 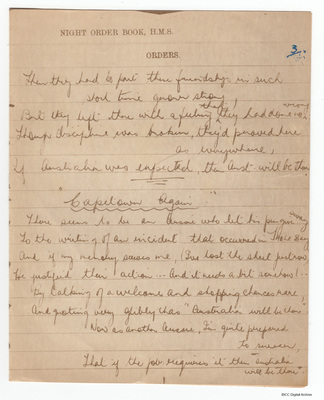 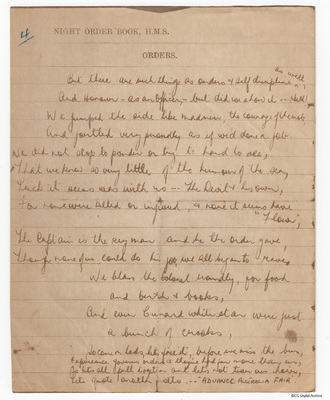 Story of adventure on a troopship ship and not being allowed ashore but then jumping ship.

On a Sunday we reached Capetown, after many days at sea, ‘The Boys’ prepared for leave ashore, to break the monotony, But they anchored in the harbour quite a distance from the wharf, Then a Tannoy message told the boys the’d not be getting off.

The lads said they were sorry, and then added one [insert] thing [/insert] more, That the swell was far too dangerous to take them all ashore, So they hung around the railings & they wondered up & down, And they cursed the rotten knowledge that they wouldn’t see the town.

Then a rumour gained momentum as Troopship rumours do, That a crowd was there to great the Sons of Fathers they once knew, There’d been many preparations for the Aquitanc’s.[sic] stay, There’d be many dissapointments [sic] if the boys were kept away.

So the boys began to realise in the waning evening light, That to leave their hosts up waiting was surely then right, Would they dissapoint [sic] the party or disappoint the Mayor, Like hell they would, they reckoned, Aust. would be there.

So they scrambled down the hawsers & defied the ships M.P.’s, They slide down ropes from portholes & they swarmed around like bees, They filled up all the tiny boats & the launches waiting around, Soon many feet were marching high & dry on Capetown ground.

Buying presents without coupons was a treat in every store, That they’d never seen in England since the early days of war, Capetowns girls turned out to help them in their choice of gifts for wives, Without imagination T’was the best leave in their lives.

Then they had to part, these friendship’s in such short time grown strong, But they left there with a feeling [inserted] that [/inserted] they had done no [inserted] wrong [/inserted], Though discipline was broken, they’d proved here as everywhere, If Australia was [underlined] expected, then Aust. will be there.

There seems to be an Aussie who let his pen give sway, To the writing of an incident that occurred in TABLE Bay, And if my memory serves me, (I’ve lost the sheet just now). He justified their action … and it need a bit somehow! … By talking of a welcome and shopping chances rare, And quoting very glibly that “Australia will be there”. Now as another Aussie, I’m quite prepared to swear, that if the job requires it then “Australia will be there”.

But there are such things as orders & self discipline [inserted] as well, [/inserted] and Honour - as an officer, - but did we show it … Hell! We jumped the side like madmen, the courage of the mob, and jostled very proudly as if we’d done a job.

We did not stop to ponder or try to hard to see, that we knew so very little of the humour of the sea, Luck it seems was with us - - The Devil & his own, for none were killed or injured, & none it seems have “Flown”.

The Captain is the key man and he the order gave, Though none of us could do his job, we all began to rave, We blame the Colonel roundly, for food and [indecipherable word] & books, And even Cunard White Star were just a bunch of crooks, So come on lads, lets face it, before we miss the bus, experience governs orders & they’ve had far more than us, So lets all pull together and lets not tear our hair, Lets quote another motto. - - “ADVANCE AUSTRALIA FAIR”.

“Australia will be there ,” IBCC Digital Archive, accessed December 10, 2022, https://ibccdigitalarchive.lincoln.ac.uk/omeka/collections/document/31077.