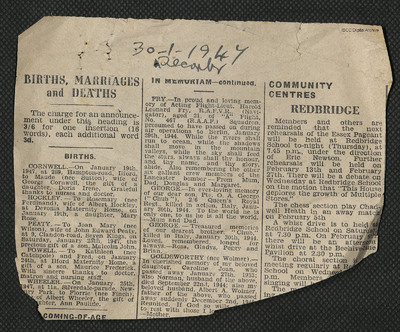 The charge for an announcement under this heading is 3/6 for one insertion (16 words), each additional word 3d.

CORNWELL. – On January 19th, 1947, at 289, Hampton-road, Ilford, to Maude (nee Sutton), wife of George Cornwell, the gift of a daughter, Doris Irene, Grateful thanks to nurses and doctor.
HOCKLEY. – To Rosemary (nee Ferdinand), wife of Albert Hockley, at Devonia Maternity Home, on January 19th, a daughter, Mary Rose.
PEATY. – To Joan Mary (nee Wilson), wife of John Edward Peaty, at 9, Clandon-road, Seven Kings, on Saturday, January 25th, 1947, the precious gift of a son, Malcolm John.
POWELL. – To Kathleen (nee Catchpole) and Fred, on January 24th, at Ilford Maternity Home, a gift of a son, Maurice Frederick. With sincere thanks to doctor, matron and nursing staff.
WHEELER. – On January 25th, 1947, at 11a, Silverdale-parade, New[missing letters]ry Park, to Florrie (nee Finch), [missing word] of Albert Wheeler, the gift of [missing letters]ghter, Ann Pauline.

FRY. – In proud and loving memory of Acting Flight-Lieut. Harold Leonard Fry, R.A.F.V.R., (Navigator), aged 21, of “A” Flight, No. 467 (R.A.A.F.) Squadron, presumed to have passed on during air operations to Berlin, January 29th, 1944. While the rivers shall run to ocean, while the shadows shall move in the mountain valleys, while the sky shall feed the stars, always shall thy honour, and thy name, and the glory, abide. Also remembering the other six gallant crew members of the Lancaster bomber – From Mum, Dad, Douglas and Margaret.
GEORGE. – In ever-loving memory of our dear son, Pte. O.A. George (“Chub”), 2/6 Queen’s Royal Regt., killed in action, Italy, January 30th, 1944. To the world he is only one, to us he is all the world. – Mum and Dad.
GEORGE. – Treasured memories of our dearest brother, “Chub,” killed in Italy, January 30th, 1944. Loved, remembered, longed for always. – Rosa, Gladys, Peggy and Brian.
GOLDSWORTHY (nee Wolmer). – In cherished memory of my beloved daughter, Caroline Joan, who passed away January 27th, 1933; also Norman, husband of the above, died September 22nd, 1944; also my beloved husband, Albert A. Wolmer, father of the above, who passed away suddenly December 2nd, 1945. Reunited. If God so wills [missing words] to rest with those I [missing words] – Mother.