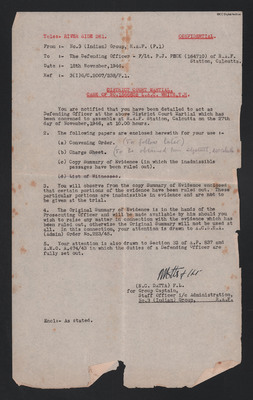 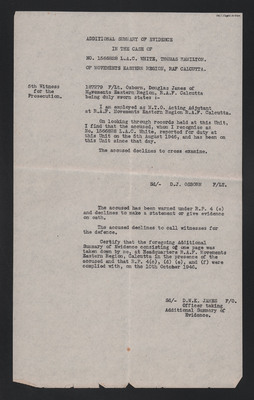 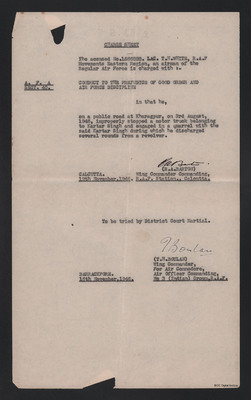 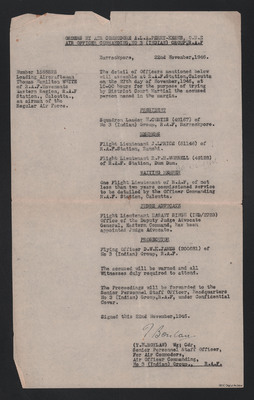 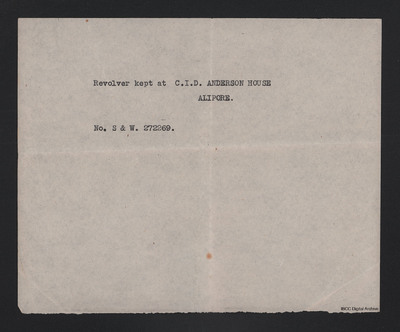 Tele:- RIVER SIDE 261.
[underlined] CONFIDENTIAL [/underlined].
From:- No. 3 (Indian) Group, R.A.F. (P.1)
To:- The Defending Officer – F/Lt. P.J. PECK (164710) of R.A.F. Station, Calcutta.
Date:- 18th November, 1946.
Ref:- 3(I)G/C.2007/238/P.1.
[underlined] DISTRICT COURT MARTIAL.
CASE OF NO. 1566828 L.A.C. WHITE, T.H. [/underlined]
You are notified that you have been detailed to act as Defending Officer at the above District Court Martial which has been convened to assemble at R.A.F. Station, Calcutta on the 27th day of November, 1946, at 10.00 hours.
2. The following papers are enclosed herewith for your use:-
(a) Convening Order. [inserted] (To follow later) [/inserted]
(b) Charge Sheet. [inserted] (To be obtained from Adjutant, RAF Calcutta) [/inserted]
(c) Copy Summary of Evidence (in which the inadmissible passages have been ruled out).
(d) List of Witnesses.
3. You will observe from the copy Summary of Evidence enclosed that certain portions of the evidence have been ruled out. These particular portions are inadmissible in evidence and are not to be given at the trial.
4. The Original Summary of Evidence is in the hands of the Prosecuting Officer and will be made available by him should you wish to raise any matter in connection with the evidence which has been ruled out, otherwise the Original Summary will not be used at all. In this connection, your attention is drawn to A.C.S.E.A. (Admin) Order No. 223/45.
5. Your attention is also drawn to Section 33 of A.P. 837 and A.M.O. A.474/43 in which the duties of a Defending Officer are fully set out.
[signature]
(N.C. DATTA) F.L.
for Group Captain,
Staff Officer i/c Administration,
[underlined] No. 3 (Indian) Group, R.A.F. [/underlined]
Encl:- As stated.
[page break]
ADDITIONAL SUMMARY OF EVIDENCE
IN THE CASE OF
NO. 1566828 L.A.C. WHITE, THOMAS HAMILTON.
OF MOVEMENTS EASTERN REGION, RAF CALCUTTA.
5th Witness for the Prosecution.
187279 F/Lt. Osborn, Douglas James of Movements Eastern Region, R.A.F. Calcutta being duly sworn states:-
I am employed as M.T.O. Acting Adjutant at R.A.F. Movements Eastern Region R.A.F. Calcutta.
On looking through records held at this Unit, I find that the accused, whom I recognise as No. 1566828 L.A.C. White, reported for duty at this Unit on the 5th August 1946, and has been on this Unit since that day.
The accused declines to cross examine.
Sd/- D.J. OSBORN F/LT.
The accused has been warned under R.P. 4 (e) and declines to make a statement or give evidence on oath.
The accused declines to call witnesses for the defence.
Certify that the foregoing Additional Summary of Evidence consisting of one page was taken down by me, at Headquarters R.A.F. Movements Eastern Region, Calcutta in the presence of the accused and that R.P. 4 (c), (d) (e), and (f) were complied with, on the 10th October 1946.
Sd/- D.W.K. JAMES F/O.
Officer taking Additional Summary of Evidence.
[page break]
[underlined] CHARGE SHEET [/underlined]
The accused No. 1566828. LAC. T.H. WHITE, R.A.F. Movements Eastern Region, an airman of the Regular Air Force is charged with:-
[underlined] A.F.A SECT. 40. [/underlined]
CONDUCT TO THE PREJUDICE OF GOOD ORDER AND AIR FORCE DISCIPLINE
in that he,
on a public road at Kharagpur, on 3rd August, 1946, improperly stopped a motor truck belonging to Kartar Singh and engaged in a quarrel with the said Kartar Singh during which he discharged several rounds from a revolver.
[signature]
(R.A. BARTON)
Wing Commander Commanding,
[underlined] R.A.F. Station., Calcutta. [/underlined]
CALCUTTA.
[underlined] 12th November, 1946. [/underlined]
To be tried by District Court Martial.
[signature]
(T.H. BOYLAN)
Wing Commander,
For Air Commodore,
Air Officer Commanding,
[underlined] No 3 (Indian) Group, R.A.F. [/underlined]
BARRACKPORE.
[underlined] 16th November, 1946. [/underlined]
[page break]
ORDERS BY AIR COMMODORE A.L.A. PERRY-KEENE, O.B.E.
[underlined] AIR OFFICER COMMANDING, NO 3 (INDIAN) GROUP, R.A.F [/underlined]
Barrackpore, 22nd November, 1946.
Number 1566828 Leading Aircraftsman Thomas Hamilton WHITE of R.A.F. Movements Eastern Region, R.A.F Station., Calcutta., an airman of the Regular Air Force.
The detail of Officers mentioned below will assemble at R.A.F. Station, Calcutta on the 27th day of November, 1946, at 10-00 hours for the purpose of trying by District Court Martial the accused person named in the margin.
[underlined] PRESIDENT [/underlined]
Squadron Leader H. CURTIS (49167) of No 3 (Indian) Group, R.A.F, Barrackpore.
[underlined] MEMBERS [/underlined]
Flight Lieutenant J. L. PRICE (51146) of R.A.F. Station, Ranchi.
Flight Lieutenant R.P.M. WORRELL (49128) of R.A.F. Station, Dum Dum.
[inserted] F/LT WEINBERG [/inserted]
[underlined][ WAITING MEMBER [/underlined]
One Flight Lieutenant of R.A.F. of not less than two years commissioned service to be detailed by the Officer Commanding R.A.F. Station, Calcutta.
[underlined] JUDGE ADVOCATE [/underlined]
Flight Lieutenant BASANT SINGH (IND/2723) Office of the Deputy Judge Advocate General, Eastern Command, has been appointed Judge Advocate.
[underlined] PROSECUTOR [/underlined]
Flying Officer D.W.K. JAMES (200681) of No 3 (Indian) Group, R.A.F.
The accused will be warned and all Witnesses duly required to attend.
The Proceedings will be forwarded to the Senior Personnel Staff Officer, Headquarters No 3 (Indian) Group, R.A.F, under Confidential Cover.
Signed this 22nd November, 1946.
[signature]
(T.H. BOYLAN) Wg; Cdr,
Senior Personnel Staff Officer,
For Air Commodore,
Air Officer Commanding,
[underlined] No 3 (Indian) Group., R.A.F. [/underlined]
[page break]
Revolver kept at C.I.D. ANDERSON HOUSE ALIPORE.
No. S & W. 272269.