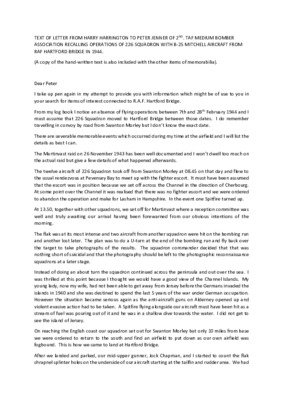 Recounts four events in detail. First the attack on Martinvast from RAF Swanton Morley on 26 November 1943 where they encountered heavy anti-aircraft fire and had to divert on return to Hartford Bridge. On return they counted over 250 shrapnel splinter holes in their aircraft. Concludes with anecdote about their return to Swanton Morley in thick fog. The second event concerned flying cadets from Sandhurst in B-25 when a cadet on exiting aircraft nearly walked into the turning propellers. The next event recounts a miraculous escape from shrapnel from a near anti-aircraft burst. The final event is the story of his crews last operational sortie on 15 May 1944 and concerned a visiting Air Vice Marshal declaring on the spot that their tour was completed but were asked to do a final trip.

TEXT OF LETTER FROM HARRY HARRINGTON TO PETER JENNER OF 2ND. TAF MEDIUM BOMBER ASSOCIATION RECALLING OPERATIONS OF 226 SQUADRON WITH B-25 MITCHELL AIRCRAFT FROM RAF HARTFORD BRIDGE IN 1944.
(A copy of the hand-written text is also included with the other items of memorabilia).