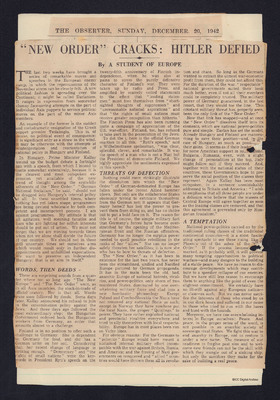 By A STUDENT OF EUROPE

THE last two weeks have brought a series of remarkable moves and speeches in the European enemy camp, in which the repercussions of the November storm can be clearly felt. A new political fashion is spreading over the Continent; it might be called Darlanism. It ranges in expression from somewhat clumsy face-saving attempts on the part of individual Axis puppets to serious political moves on the part of the minor Axis members.

An example of the former is the sudden and melodramatic resignation of the Greek puppet premier Tsolakoglu. This is, of course, no political event of consequence; it is significant only as a straw in the wind. It may be otherwise with the attempts at reinterpretation and reorientation of national policy in Hungary and Finland.

In Hungary, Prime Minister Kallay wound up the budget debate a fortnight ago with a speech, from which I intend to quote somewhat extensively, because it is the clearest and most outspoken expression yet available of the new trend of thought among the erstwhile adherents of the “New Order.” “German National Socialism,” he said, “should not be dragged into Hungary’s internal policy at all. In these unsettled times, where nothing has yet taken shape, programmes are being devised wholesale by both competent and incompetent persons. I am against programmes. My attitude is that all agitators, well meaning fanatics and liars who are fighting for selfish interests should be put out of action. We must not forget that we are moving towards times when not we alone shall decide the future of our country. We should not in these still uncertain times set ourselves aims which would result only in further disappointments and unfulfilled expectations. We want to preserve an independent Hungary; that is an aim in itself.”

These are surprising sounds from a quarter where not so long ago “The New Europe” and “The New Order” were, as in all Axis countries, the stock-in-trade of official oratory. Nor is that all. Words were soon followed by deeds. Some days later, Kallay announced his refusal to join in the extermination policy against the Jews. And three days ago followed the most extraordinary step: the Hungarian Government ordered back the Hungarian workers from Germany, an order that amounts almost to a challenge.

Finland is in no position to offer such a challenge to Germany. She is dependent on Germany for food, and she has a German army on her soil. Considering that, her recent change of language is striking enough. “Democracy” and “the rights of small nations” were the key-words in President Ryti’s speech on the twenty-fifth anniversary of Finnish independence, when he was also at pains to stress the purely defensive character of Finland’s war. They were taken up by radio and Press, and amplified by scarcely veiled statements to the effect that “leading statesmen” must free themselves from “short-sighted thoughts of suppression” and “unreasonable national aspirations” and that “the rights of small nations must receive greater recognition than hitherto.” The Finnish Press has also been running quite a campaign of appreciation of the U.S. war-effort. Finland, too, has refused to take part in the persecution of the Jews.

To dot the i, here is the official German reaction to all this. “Ryti’s speech,” said a Wilhelmstrasse spokesman, “was clear, splendid, clever, and remarkable. It was the speech of a man who is not a Nazi but the President of democratic Finland. We highly appreciate the sentiments expressed in this speech.”

Nothing could more strikingly illustrate the dissolution into which the “New Order” of German-dominated Europe has fallen under the recent Allied hammer blows. Not only are the collaborator States obviously trying to extricate themselves from the German net; it appears that Germany herself has lost the power to prevent them from doing so, and has no choice but to put a bold face on it. The reason for this is of course, the simple military fact that Germany’s forces have become over-stretched by the opening of the Mediterranean front and the Russian offensives. Germany has no longer the surplus power needed to quell possible rebellions in the ranks of her “allies.” She can no longer safely threaten her satellites; it is now she who has to bow to threats of defection.

The “New Order,” as it has been in existence for the last two years, has never been the streamlined, unified and Nazified Europe pictured by German propaganda. It has in the main been the old, bad, anarchic Europe of national hatreds, rivalries, and power-politics, only shorn of two murdered States, dominated by one overwhelming military force and clad into a new bombastic phraseology. Except Poland and Czecho-Slovakia the Nazis have not removed any national State as such; except in Norway they have nowhere put the local Nazis, the proper “Quislings,” in power. They have rather exploited national and provincial rivalries everywhere and tried to ally themselves with local respectability. Europe has in most places been run on Vichy lines.

For obvious reasons: For the Germans to “polonize” Europe would have meant a sustained internal military effort incompatible with the war against Britain, Russia, and America; and the forcing of Nazi governments on conquered and “allied” countries would have thrown them all in revolution and chaos. So long as the Germans wanted to extract the utmost war-economic profit from them, they could not afford this. For the duration of the war “respectable” national governments suited their book much better, even if not all their members could be completely trusted. The military power of Germany guaranteed, in the last resort, that they would toe the line. This constant military threat has, properly seen, been the only link of the “New Order.”

Now that link has snapped – and at once the “New Order” dissolves itself into its elements, which are national power-politics pure and simple. Darlan has set the model. Already Hungary and Finland are manoeuvring to save their position – and in the case of Hungary, as much as possi[missing letters] their gains. It seems as if their leade[missing letters] for some American support in su[missing letters] game. Bulgaria, Rumania, even, with a slight change of personalities at the top, Italy might follow suit if they succeed. And, together with the national status of their countries, these Governments hope to preserve the social position of the classes they represent. Again Kallay has been most outspoken, in a sentence unmistakably addressed to Britain and America: “I wish to emphasise that all those people are under a delusion who believe that the masses of Central Europe will agree together as soon as the leading classes are removed, and that this agreement is prevented only by Hungarian feudalism.”

National power-politics carried on by the traditional ruling classes of the traditional continental countries – it is a most fascinating spectacle to see these rising like [missing word] Phoenix out of the ashes of the [missing word] Order.” If the process become[missing letter and words] marked, as it probably will, it will provide many tempting opportunities to political warfare – and many dangers to the building of a stable peace. We have no reason to discourage developments which may contribute to a speedier collapse of our enemies. But we have still less reason to encourage them to anything like the point of even the slightest commitment. We certainly have no ill-will against any European nation – or class – as such. But we can never sacrifice the interests of those who stood by us in our dark hours and suffered in our cause to those who tried to run with the hares and hunt with the hounds.

Moreover, we have one overwhelming interest in Europe ourselves: Peace. And peace, in the proper sense of the word, is not possible in an anarchic society of sovereign rival States. We fight this war to end anarchy in Europe, not to restore it under a new name. The measure of our readiness to forgive past sins and to welcome new friends can not be the skill with which they wangle out of a sinking ship; but only the sacrifices they make for the sake of building a real peace.