The Lay of the First Air Bomber 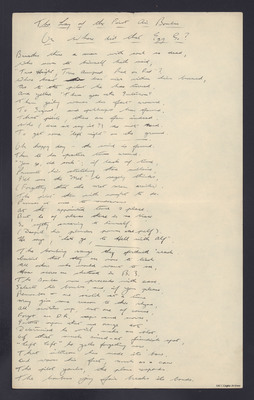 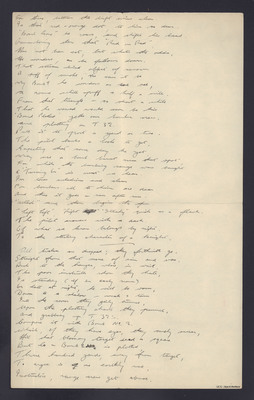 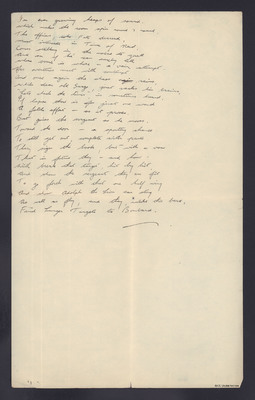 The Lay of the First Air Bomber
Or Where did that Egg Go?

A poem about bombing.

[underlined] The Lay of the first Air Bomber
Or Where did that Egg Go? [/underlined]
Breathes there a man with soul so dead,
Who never to himself hath said;
“True Height, True Airspeed, Red on Red”?
Whose heart [deleted word] has ne’er within him burned,
As to the pilot he has turned
And yelled “There goes the Intercom”
Then gaily waves his feet around,
To Signal, and perhaps has found.
That pilots, there are few indeed.
Who (dare we say it?) do not heed.
To get some “left right” on the ground.

Oh happy day – the wind is found.
Then to his partner turns around.
“You go, old sock”; if lack of time,
Prevents him stretching there sublime,
I’ll use the “Met” he sagely thinks,
(Forgetting that the Met Man drinks)
The pilot then with nought to do.
Proceeds at once to rendezvous
At the appointed time & place.
But, of planes there is no trace.
So softly swearing to himself.
(Despite his plunder power and pelf).
He says, “Lets go, to Hell with Alf”

The bombing range they forthwith reach
Content that they are now to teach
All others who would want to see,
How scores are shattered in B. 3.
The Bomber now proceeds with ease,
Selects his bombs, and, if you please,
Remember – one scotch at a time
May give some reason to this rhyme,
All switches up, but on of course,
Forgot on D.R. maps and morse,
Intent upon that red orange dot.
Determined he will make and plot,
Of that much aimed – at fiendish spot,
“Left Left” he yells forgetting now,
That intercom has made its bow.
and waves his feet, much as a cow
The pilot yanks, the plane responds.
The bombers jig fair breaks its bonds.
[page break]
For there, between the drift wires clear
In that red - orange dot to him so clear.
“Bomb Gone” he roars, and shifts his head,
Remembering then that “Red on Red”
Has not been set, but whats the odds,
He wonders, as he follows down.
That stream lined object of renown
A puff of smoke, “No can it be
My Bomb?” he wonders as we see,
A round white puff a half a mile,
From that triangle – so short a while
That he vowed would soon be his
’Bomb Plotted’ yells our bomber crew,
and plotting on T 32.
Puts it to port a yard or two
The pilot banks a look to get,
Expecting that some day he yet
May see a bomb burst near that spot
for which the bombing range was bought
A “Turning On” is next we hear.
In tones melodious and clear
For bombers all to him are dear
And this it goes – run after run
“Attack” and then begins the fun.
“Left Left”, “Right [deleted word] Steady” quick as a flash.
The pilot answers with a dash.
Of what we know belongs by right
To the sterling character of a knight.

All twelve are dropped; they forthwith go.
Straight from that scene of sin and woe.
Back to the hangar, where, in wait,
The poor instructor whom they hate,
Is standing (if in early morn)
Or late at night, he will be worn,
Down to a shadow – weak & torn
Into the room they gaily trounce,
Upon the plotting charts they pounce,
And grabbing up T 32’s.
Compare it with Bomb No 2.
Which, if they have eyes, they surely swear,
Hit that blooming target dead & square
But lo – Bomb 2 [deleted word] is plotted,
Three hundred yards, away from target,
To argue is [deleted word] no earthly use;
Instructors, sarge even get abuse.
[page break]
In ever growing heaps of sound.
Which makes the room spin round & round.
The officers, who Fate decreed,
Must intercede in Time of Need,
Comes stalking in, the noise to quiet
And see if he can surely tell
Whose bomb is whose – a vain attempt,
His overtures meet with contempt
And once again the chaos [deleted word] rains,
While dear old Sarge, just racks his brains,
“Lets check the times” is sometimes heard.
If lapse there is for just one word
A futile effort – as it proves.
But gives the sergeant as he moves.
Toward the door – a sporting chance.
To still get out, complete with pants
They sign the book, but with a vow
That in future they – and how –
Will break that target, hit by hit
And show the sergeant they are fit
to go forth with that one half wing
And show Adolph the Lion can sting
As well as fly, and they, unlike this bard,
Find Larger Targets to bombard.

“The Lay of the First Air Bomber,” IBCC Digital Archive, accessed May 18, 2022, https://ibccdigitalarchive.lincoln.ac.uk/omeka/collections/document/18752.