Cuttings reporting and commenting on last operational flight by a Lancaster 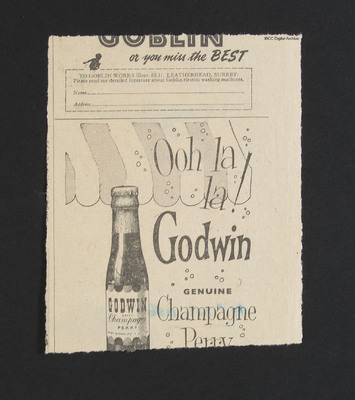 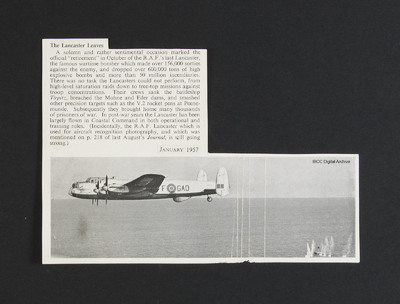 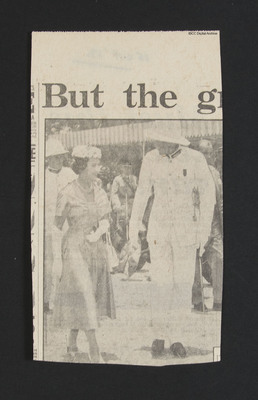 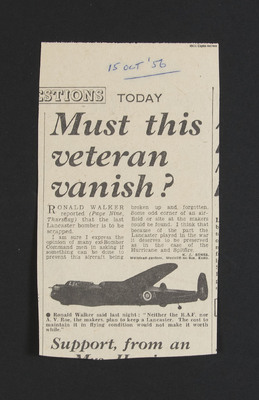 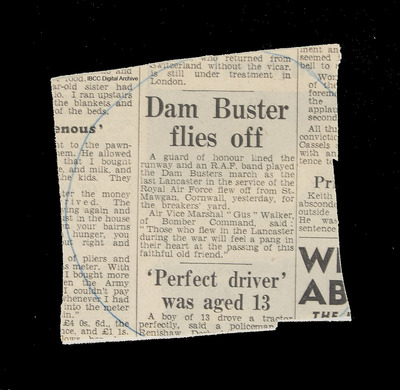 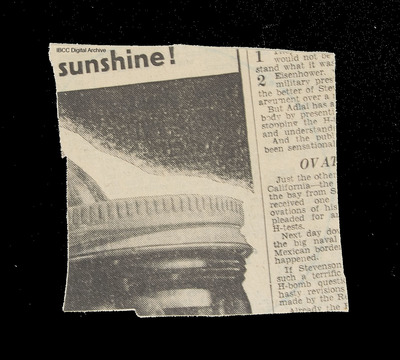 Cuttings reporting and commenting on last operational flight by a Lancaster

RAF says goodbye to ‘the Lanc’

THE R.A.F. is saying farewell to the Lancaster, the four-engined heavy bomber which became the major weapon of Bomber Command during the war.

The last Lancaster made its last “operational” flight yesterday – a tour of Coastal Command stations. Since the war the Lancaster has been serving as a submarine chaser.

And on Monday the plane will take off from St. Mawgan, Cornwall, on its final flight – to its makers, Avro, to be broken up for scrap. Marshal of the Royal Air Force Sir Arthur Harris, wartime chief of Bomber Command, said this of the Lancaster: “To my mind it was the greatest single factor in winning the war.”

They wrecked the battleship Tirpitz; they breached the Mohne and Eder dams, and bombed Hitler’s eyrie at Berchtesgaden.

[photograph]
SEAMASTER. After loss of the first prototype, Martin’s second XP6M-1 attack seaplane was well advanced in its flight trials when that, too, was unfortunately lost in November.
Span 100 feet.

[partially obscured photograph]
D.H. 110. Still unnamed, this twin boom all-weather fighter is to replace the Royal Navy’s Sea Venoms in due course, and has recently been equipped with the pointed radome shown in the illustration. Note also the pylons for various underwing loads.
Span 51 feet.

[photograph]
STARFIGHTER. Lockheed’s revolutionary XF-104 was unveiled early last year, and plans have now been made for three versions, the F-104A, RF-104A and F-104B. The Starfighter has been credited with a speed of 1,500 m.p.h.; it is 55 feet long and spans only 22 feet.

The Lancaster Leaves
A solemn and rather sentimental occasion marked the official “retirement” in October of the R.A.F.’s last Lancaster, the famous wartime bomber which made over 156,000 sorties against the enemy, and dropped over 600,000 tons of high explosive bombs and more than 50 million incendiaries. There was no task the Lancasters could not perform, from high-level saturation raids down to tree-top missions against troop concentrations. Their crews sank the battleship [italics] Tirpitz, [/italics] breached the Mohne and Eder dams, and smashed other precision targets such as the V.2 rocket pens at Peenemunde. Subsequently they brought home many thousands of prisoners of war. In post-war years the Lancaster has been largely flown in Coastal Command in both operational and training roles. (Incidentally, the R.A.F. Lancaster which is used for aircraft recognition photography, and which was mentioned on p. 218 of last August’s [italics] Journal, [/italics] is still going strong.)
JANUARY 1957
[photograph]

But the g[missing letters]
[photograph]

Must this veteran vanish?

I am sure I express the opinion of many ex-Bomber Command men in asking if something can be done to prevent this aircraft being broken up and forgotten. Some odd corner of an airfield or site at the makers could be found. I think that because of the part the Lancaster played in the war it deserves to be preserved as in the case of the Hurricane and Spitfire.

Ronald Walker said last night: “Neither the R.A.F. nor A.V. Roe, the makers, plan to keep a Lancaster. The cost to maintain it in flying condition would not make it worth while.”

Support, from an [missing words]

A guard of honour lined the runway and an R.A.F. band played the Dam Busters march as the last Lancaster in the service of the Royal Air Force flew off from St. Mawgan, Cornwall, yesterday, for the breakers’ yard.

Air Vice Marshal “Gus” Walker, of Bomber Command, said: “Those who flew in the Lancaster during the war will feel a pang in their heart at the passing of this faithful old friend.”