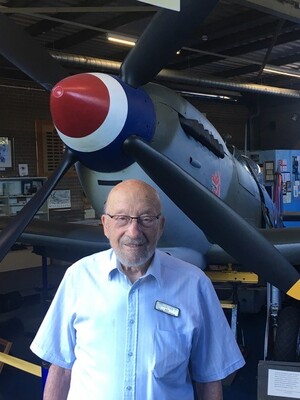 Gerald Abrahams was sixteen when war was declared. He volunteered for the RAF the day after the Armstrong Vickers factory where he worked was targeted by the Luftwaffe who bombed the local school resulting in the deaths of many children. He trained as a wireless operator and was posted to 75 Squadron at RAF Mepal. He and his crewmates were very aware of the poor odds of survival. On their last operation they came under fire from an anti-aircraft fire ship and found on return to base that there were thirty-eight holes in the fuselage. Gerald continued flying after the war and ultimately became a commercial pilot. He flew about twenty different aircraft including Yorks, Britannias, Viscounts and DC4s.