Nine items. An oral history interview with Stella Jones about her late husband, Sergeant William Jones (b. 1924, 1852503 Royal Air Force), his log book, documents and photographs. His photograph album is a sub-colection. He flew operations as a wireless operator with 218 Squadron.

The collection has been loaned to the IBCC Digital Archive for digitisation by Stella Jones and catalogued by Barry Hunter. 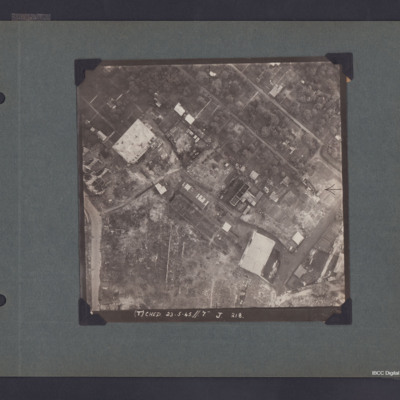 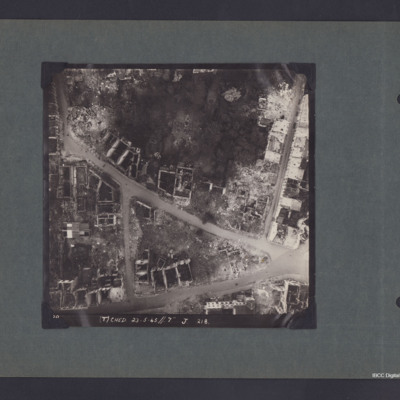 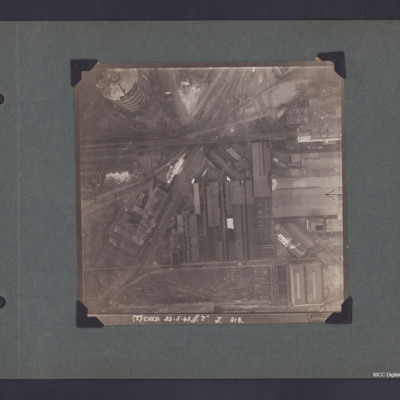 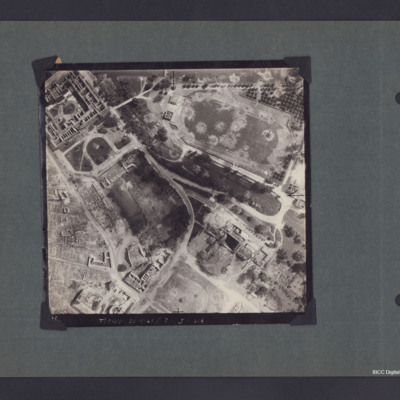 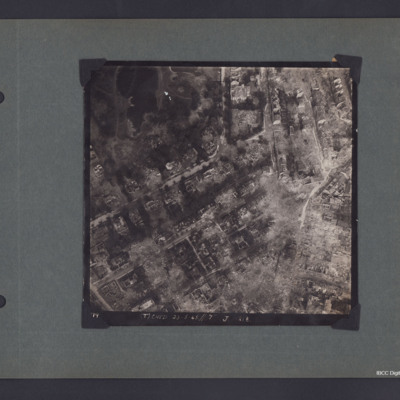 A vertical aerial photograph of Essen around Stadtgarten and Hohenzollernstraße. The photo is captioned '(T) Ched 23.5.45//7" J 218'.
On the reverse 'Crown Copyright Reserved' and 'Essen'. 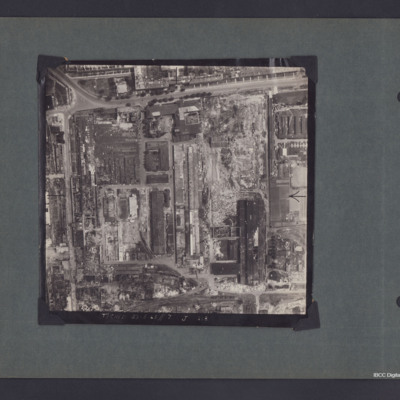 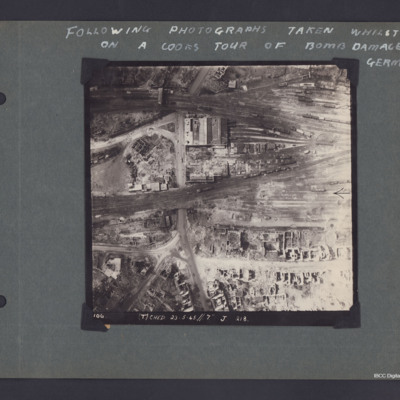 A vertical aerial photograph of Munster captioned 'Following photographs taken whilst on a Cook's tour of Bomb damaged Germany'.
The photo is captioned '(T) Ched 23.5.45//7" J 218'.
On the reverse 'Crown Copyright Reserved' and 'Munster'.

Navigator’s, air gunner’s and air bomber’s flying log book for W C Jones, wireless operator, covering the period from 13 December 1943 to 23 May 1945. Detailing his flying training and operations flown. He was stationed at RAF Madley, RAF… 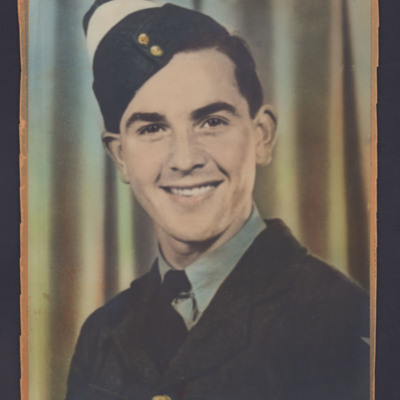 A half-length portrait of William wearing a trainee side cap. The image has been colourised. On the reverse 'R74/8268 Col'. 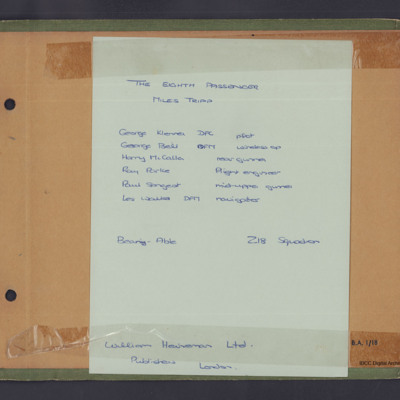 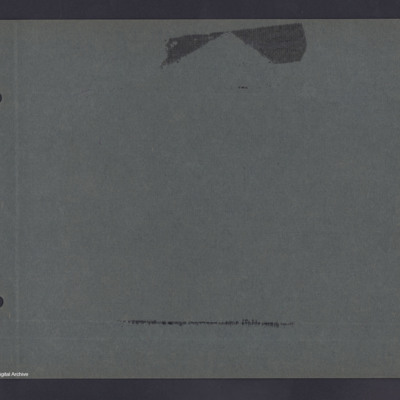 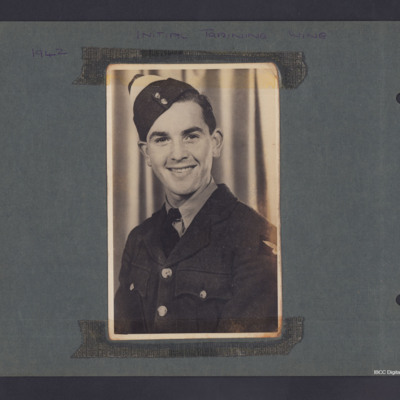 A half-length portrait of William wearing a trainee side cap. 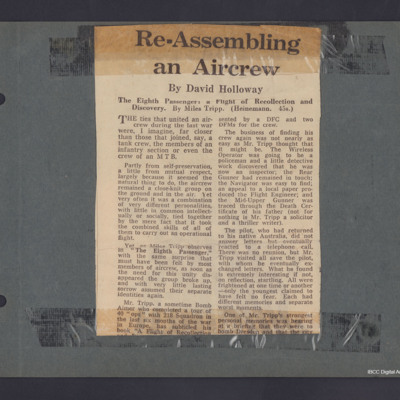 A review of 'The Eight Passenger' by Miles Tripp. Miles Tripp was a bomb aimer with 218 Squadron. In the book the author explains his efforts to reunite with his former crew. 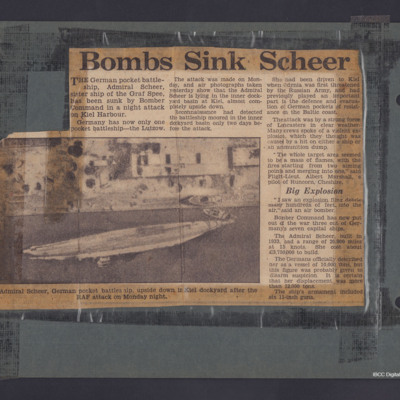 A newspaper cutting telling of the sinking of the Admiral Scheer by Lancasters. 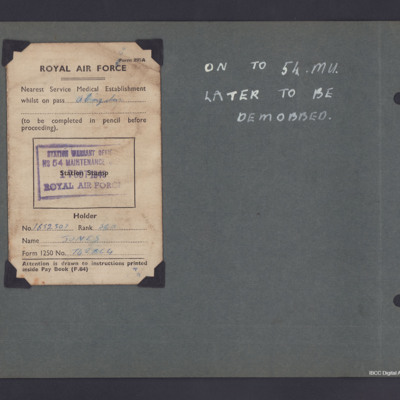 RAF Form 295A issued to William to allow him leave whilst at 54MU. Captioned 'On to 54.MU later to be demobbed'. 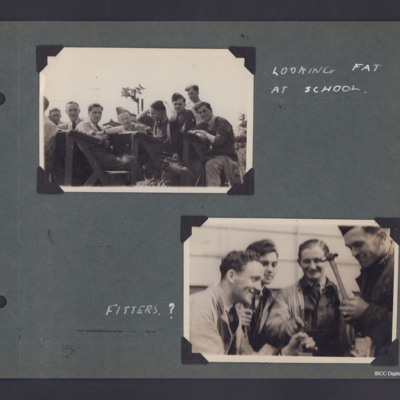 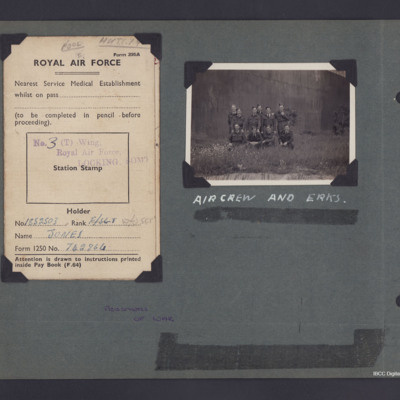 William's pass card and a photograph of ten airmen.
RAF Form 295A issued to William containing details of his temporary leave.
The photograph is captioned 'Aircrew and Erks' and has ten men in two groups in front of a hangar. 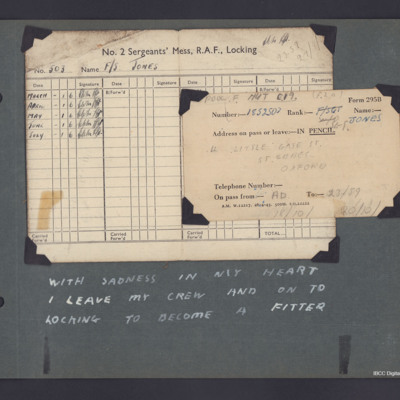 Five items from an album.
Item 1 is a Mess card from RAF Locking.
Item 2 is an address card for William Jones, part of his mess card.
Item 3 is the reverse of the address card.
Item 4 is the monthly charges at the Mess.
Item 5 is the cover of…

Veterans. A Tribute to a Fighting Crew of Immortals 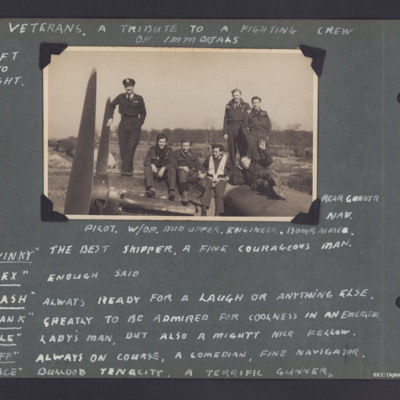 William Jones and his crew positioned on top of the starboard wing of their Lancaster.
Captioned 'Veterans. A Tribute to a Fighting Crew of Immortals'
Left to Right. Pilot. W/Op. Mid Upper. Engineer.Bomb Aimer Nav. Rear Gunner.
"Winky" The best… 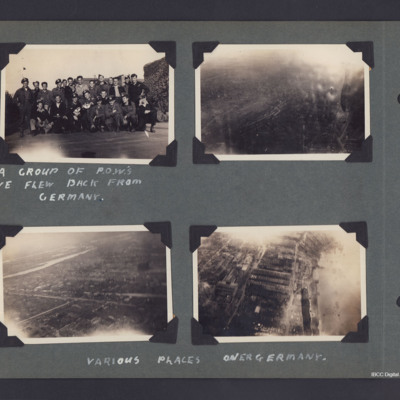 Four photographs and four copies from an album.
Top left is a group of prisoners of war, captioned 'A group of POWs we flew back from Germany'. On the reverse of 5 is '440'.
The other three photos are aerial photographs of bomb damage over Germany.… 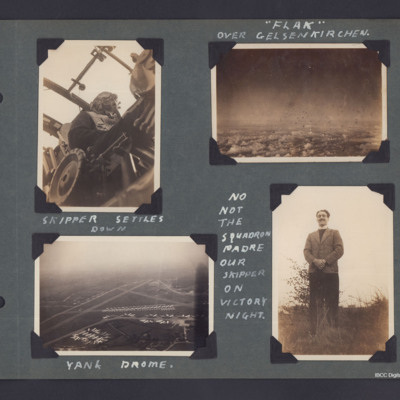 Photo 1 is the pilot viewed from the bomb aimer's station of a Lancaster, captioned 'Skipper settles down'.
Photo 2 is of black explosions above the clouds, captioned ' "Flak" over Gelsenkirchen.
Photo 3 is captioned 'Yank drome' and is of… 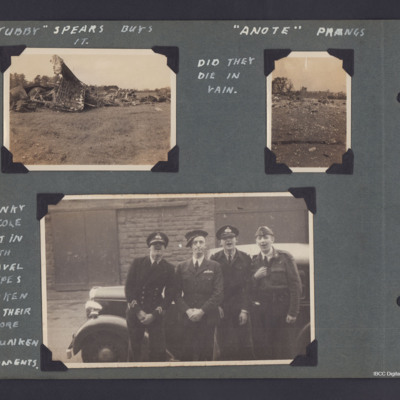 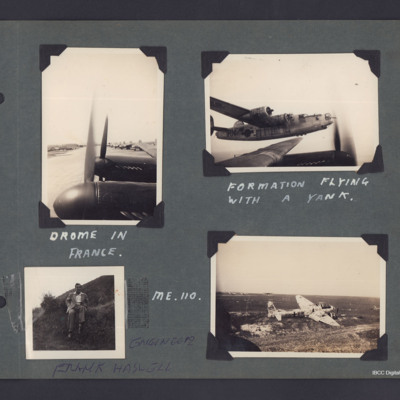 On to Squadron and Ops 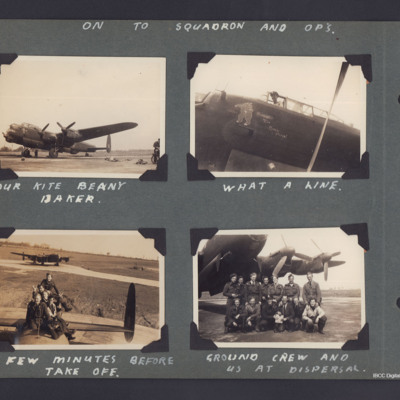 Photo 1 is a port side view of a Lancaster, captioned 'Our kite Beany Baker'. On the reverse of 5 '440'.
Photo 2 is of a shirtless airman sitting in the cockpit viewed from the ground. The nose art is of a Bear annotated 'Bring 'em back alive'. The…
View all 43 items