42 items. The collection concerns Sergeant John Taylor Brittain (2227748, Royal Air Force). After training as an air gunner at Morpeth and conversion and training at Silverston, North Luffenham and Feltwell, he was posted to 195 Squadron at RAF Wratting Common in February 1945 and flew on operations as a mid upper gunner on Lancaster. The collection consists of his flying logbook; official documents; letters to colleagues and his mother; photographs of people, events, places and aircraft; as well as an album concerning his boat.

The collection has been loaned to the IBCC Digital Archive for digitisation by Andrew Whitehouse and catalogued by Nigel Huckins.

Letter from John Brittain to his mother 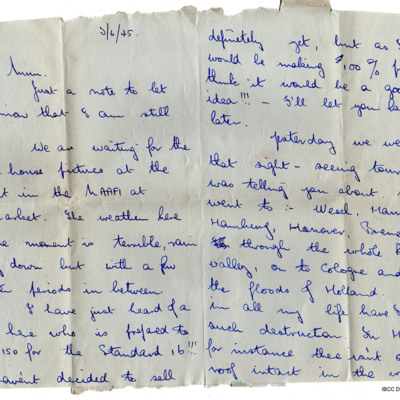 Three page letter envelope from John Brittain to his mother. He mentions the bad weather and that he might sell his car. He tells her of the devastation that he has seen while flying over Germany.

Conversion of landing craft to motor launch, other activities, newspaper cutting and people 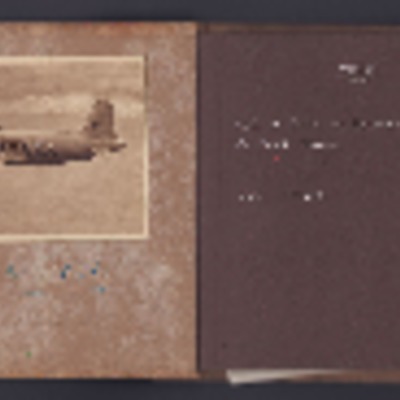 Opens with photograph of BEA Viking with caption 'Its quicker by air. Followed by seven pages with 11 photographs and a drawing showing the conversion of landing craft to motor launch between September 1946 and its launch on 5 June 1948. Then 27…

John Bittain and his decorations 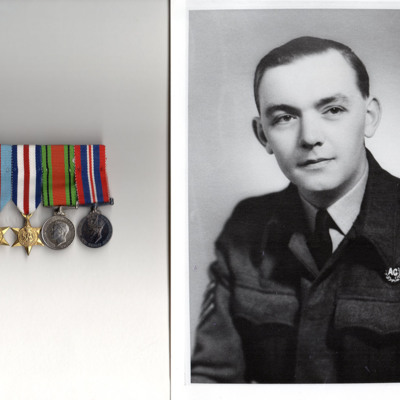 On the left four medals, 1939-45 Star, France and Germany Star, Defence Medal and War Medal 1939-1945. On the right, a head and shoulders portrait of John Brittain with air gunner brevet and sergeant stripes.

Passing out parade at Cranwell 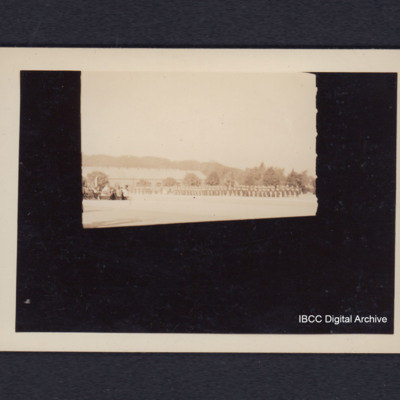 A large formation formed up in the middle distance with a reviewing party to the left and low tree covered hill in the background. On the reverse 'Passing out parade of officer cadets at Cranwell Lincs, 1945, taken from inside billet'.

View of clouds from a Stirling 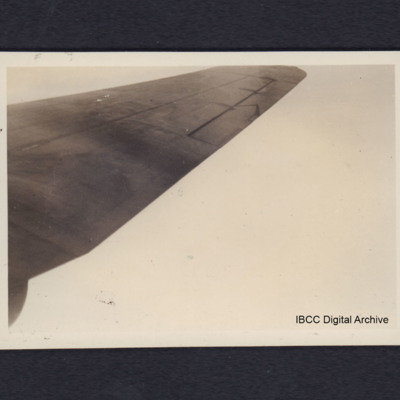 RAF Dyce from the air 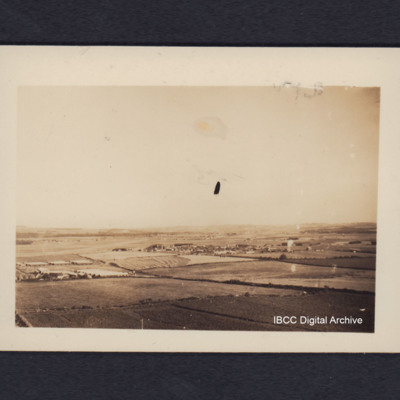 Oblique aerial photograph of a runway In the distance running from lower left to middle of the image, surrounded by fields with a village in the centre. On the reverse 'Dyce airfield near Aberdeen, from low flying Lancaster'.

Convoy of lorries and three airmen

A convoy of small lorries including a tanker parked at the side of road. In front centre are three airmen standing. In the background a row of houses.

Convoy of small lorries parked in row at side of street. In the background a row of houses.On the reverse 'Operation [indecipherable], 2 i/c'. 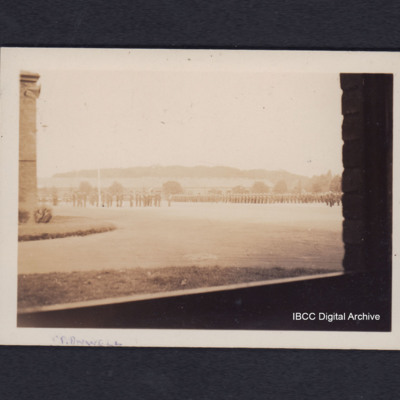 Large formation of personnel formed up in the distance on a parade square. Group of people clustered round a flag pole to the left and edge of a building far left. Tree covered low hill in the background. On the reverse 'Passing out parade of cadets… 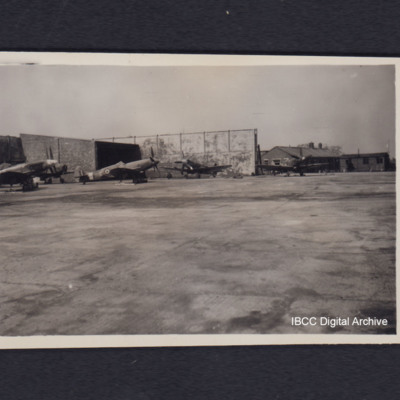 Four spitfires parked on dispersal. A fifth aircraft is parked behind with no propeller. In the background buildings. On the reverse 'Spits, Biggin Hill' 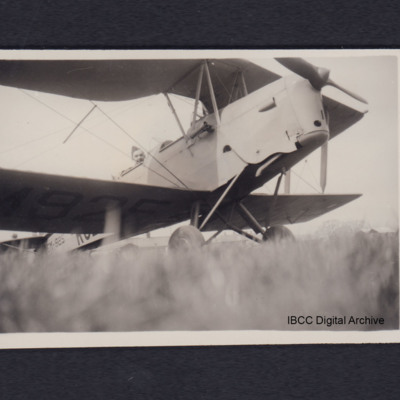 Front quarter view of starboard side of a Tiger Moth on the ground. A man wearing side cap is visible in rear cockpit. On the reverse 'Moths, Biggin'. 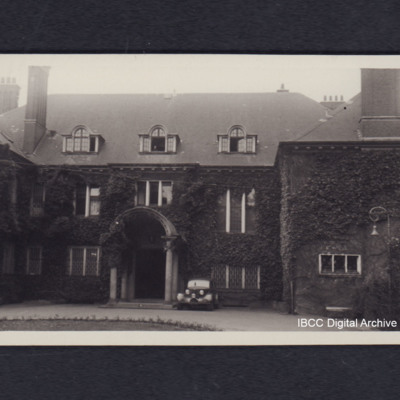 Two story a brick house, covered in ivy. There are dormer windows in the roof and a car parked to the right of the entrance. On the reverse 'Front, officers club Meulheim [sic]'. 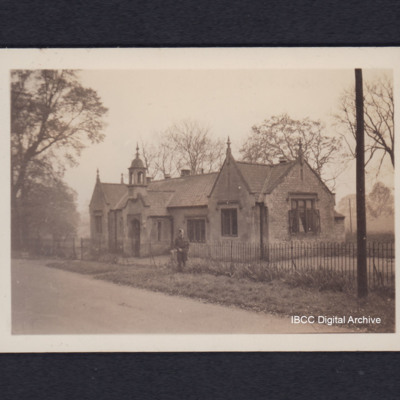 School building with ornate roof and small cupola surrounded by railings fence with trees all around. An airman stands in front of the building. On the reverse 'Schoolroom used for first aid lectures near Cranwell, "Curly" - LAC Stewart by Railings'.

Twenty-two pilots in front of a Spitfire 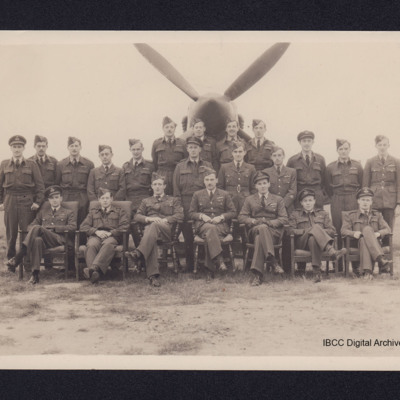 Seven pilots sitting in armchairs in front with fifteen standing behind, wearing a variety of uniform, all in front of a Spitfire. On the reverse '91 Squadron?'. 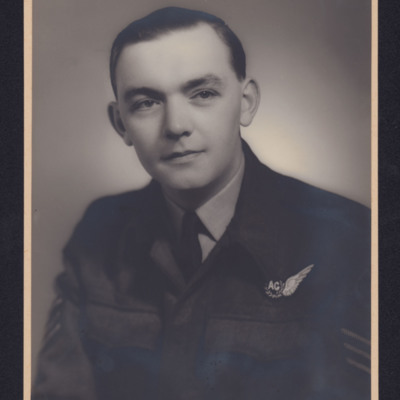 Head and shoulders portrait of John Brittain wearing battledress with air gunner brevet and sergeants stripes. Additional information about this item was kindly provided by the donor.

Seven airmen in a field 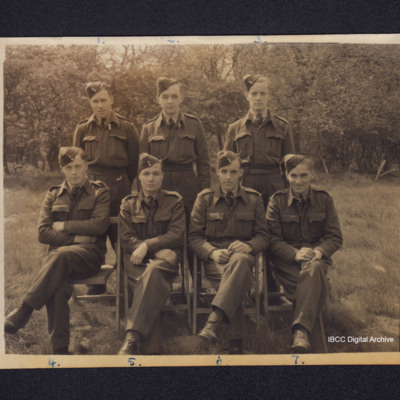 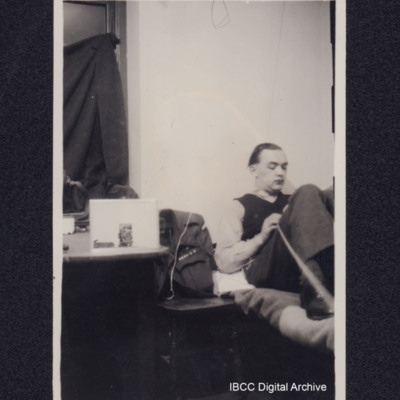 A man wearing shirt and sleeveless pullover and trousers sitting on a bed reading. To the left a battledress uniform on a chair and a table.

Four members of Women’s Auxiliary Air Force sitting on the running board of a car. In front sitting on the ground are four airmen. In the background are houses. On the reverse 'M.T Section Cardington - Part Of, back row, Lynn Clark, - "Spooky"… 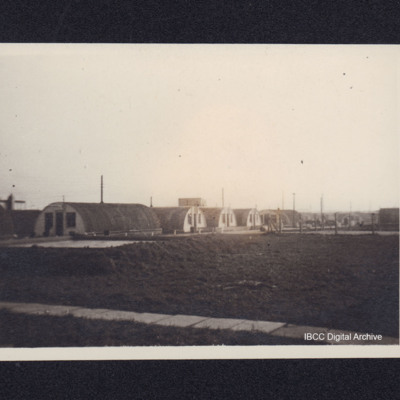 Five Nissen huts two end on and three side on in a row. In the foreground a path. 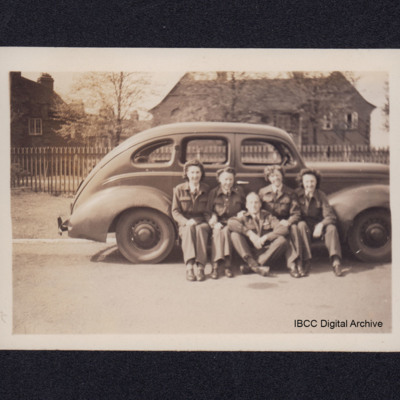 Four members of the Women’s Auxiliary Air Force and and an airman all wearing battledress sitting on the running board of a car. In the background houses. On the reverse 'M.T Section Cardington, Pam Hills - "Tony" Parkinson, Ted Lyons, - "Spooky"… 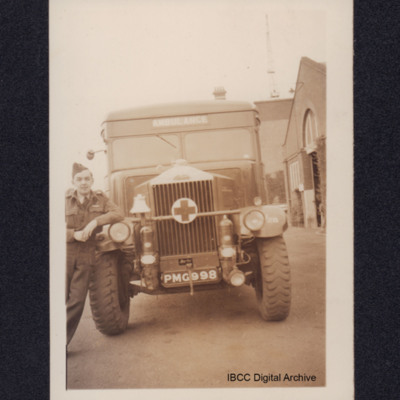 An airman wearing battledress and side cap leaning on the headlamp of an ambulance registration 'PMG998'. In the background right, buildings and a mast. On the reverse 'John'. 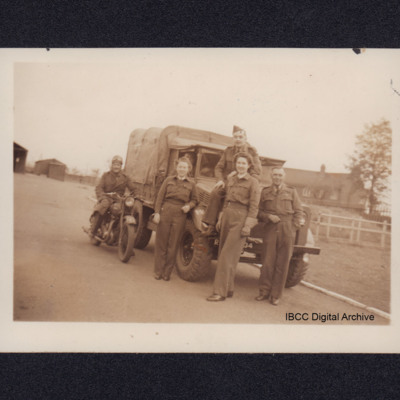 Two members of Women’s Auxiliary Air Force and an airman are standing in front of a small lorry with another airman sitting on the bonnet. All are wearing battledress. A man wearing overcoat and helmet is sitting astride a motor bike to the left of… 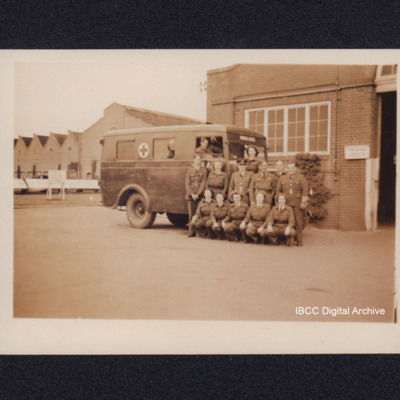 Group in front of an ambulance. Five woman in front row, five men and two women standing behind and one man in the driving seat of the ambulance. Behind right a brick building with sign 'Traffic Office' to the left workshop buildings. On the reverse… 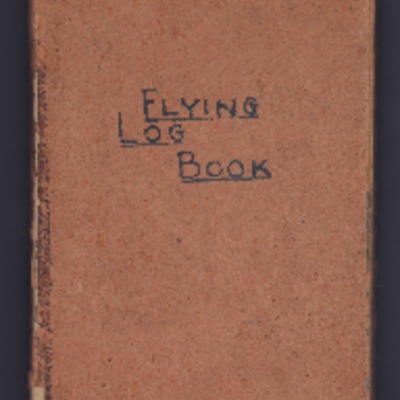 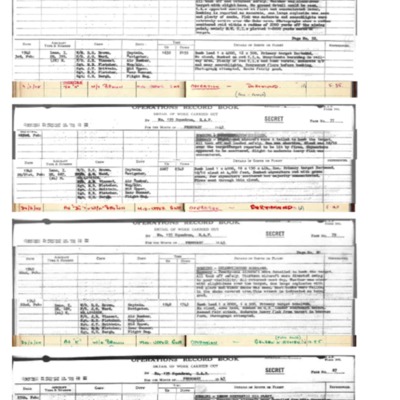