Six items. One oral history interview with Peter Rowlands Woodard (b. 1924, 1810707 Royal Air Force), photographs, a warrant certificate and a note of operations carried out by H R Woodard. He was a wireless operator and flew operations with 192 Squadron.

The collection has been loaned to the IBCC Digital Archive for digitisation byPeter Rowlands Woodard and catalogued by Trevor Hardcastle.

Bride and groom on wedding day 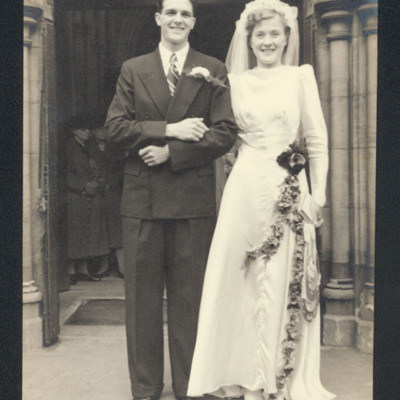 Bride and groom in front of church entrance, groom in suit, bride in wedding dress. Two other women are visible inside the church.

Six aircrew in front of a Wellington 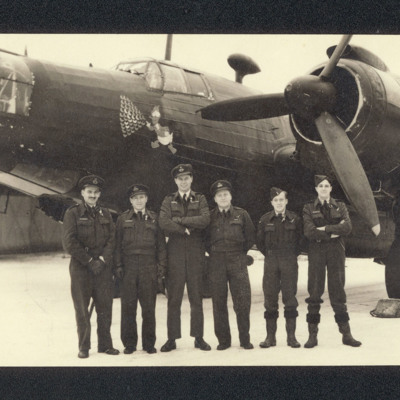 Six aircrew in front of Wellington D, parked in front of a building with chocks on wheels. Nose art of Donald Duck pointing at ducklings visible on aircraft. Four aircrew are wearing peaked caps and two side caps.

From left to right are relation,… 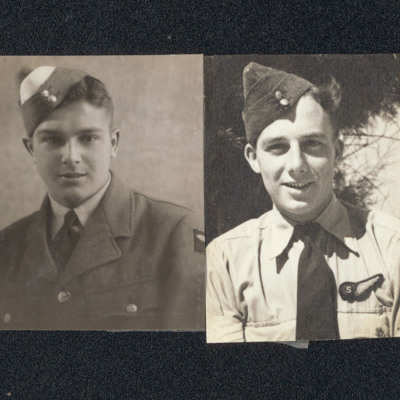 Two head and shoulders portraits of aircrew: a trainee on the left, an airman with a signaller brevet on the right.

Appointment by the Secretary of state for air of Peter Woodard to the rank of warrant officer. 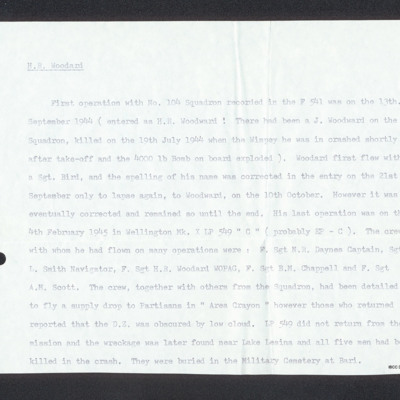 Brief account of H R Woodard's operations with 104 Squadron from the first on 13 September 1944 until the last on 4 February 1945. Includes reference to misspelling of his surname and names of his regular aircrew. Final operation with LP 549 was to…

Peter Woodard was a wireless operator and after training at RAF Yatesbury he flew operations with 192 Squadron.
View all 6 items