13 items. An oral history interview with Neville Shenbanjo (b. 1945), the son of Flying Officer Akin Shenbanjo DFC, and 12 photographs.

Akin Shenbanjo attempted to volunteer for service with Bomber Command whilst in Nigeria. He was told they were not recruiting there so he made his own way to the UK to enlist. After training he flew operations as a wireless operator / air gunner with 76 Squadron.

The collection has been loaned to the IBCC Digital Archive for digitisation by Neville Shenbanjo and catalogued by Barry Hunter.

Akin Shenbanjo in uniform seated on the steps at the entrance to a house. He has a young child on his knee. 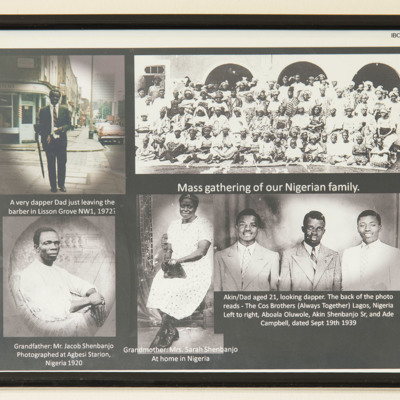 A framed montage of five photographs.
Photo 1 is a colour image of Akin standing on a street pavement, captioned 'A very dapper Dad just leaving the barber in Lisson Grove NW1, 1971'.
Photo 2 is a family group arranged in four rows, captioned 'Mass… 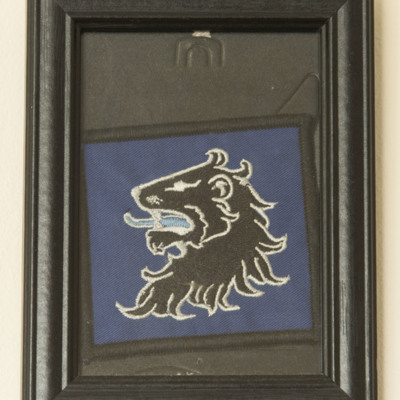 A black lion on a blue background, made of embroidered cloth and mounted in a wooden frame. 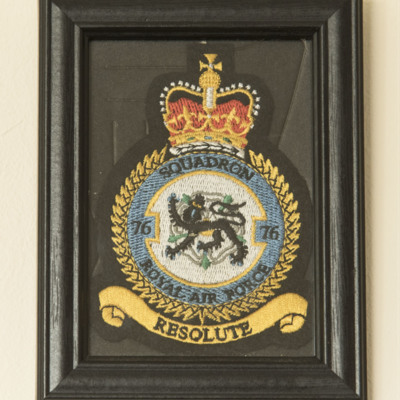 76 Squadron crest made in embroidered cloth and set in a wooden frame.

31 airmen arranged in three rows.. Underneath are captioned the names of the individuals including Akin Shenbanjo DFC.

Half length portrait of Akin Shenbanjo holding a large dog. Behind two or three airmen look on. 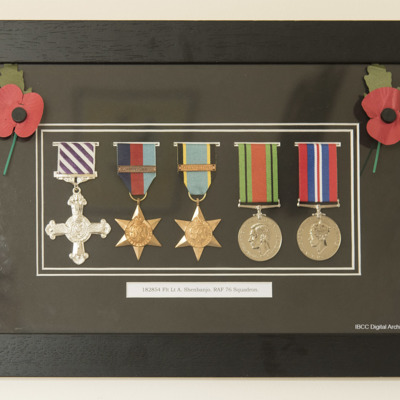 Four airmen standing in a row.

19 airmen loosely arranged in two rows. Akin is half lying at the front. Behind is a Halifax. A remembrance poppy has been attached to the top left of the photograph.

Akin Shenbanjo and his crew

Seven airmen, including Akin Shenbanjo, are standing under the front of their Halifax. They are wearing parachute harnesses and Mae Wests. 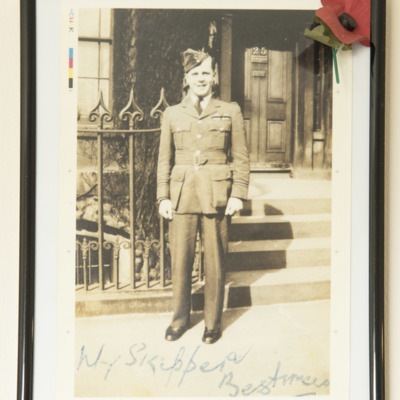 Full length image of a pilot standing on the pavement at the entrance of a house, No 25. Steps lead up to the entrance and there are very ornate railings. There is a handwritten comment 'My Skipper & Bestman'.
In the top right corner a remembrance…

Seven airmen including Akin Shenbanjo arranged on the cockpit of a Halifax. 50 operations are marked by painted bombs and the aircraft's name is Achtung the Black Prince.
In the top right corner a remembrance poppy has been added.

Neville Shenbanjo was born in 1945, the son of Akin Shenbanjo. Flying Officer Akin Shenbanjo DFC was born in Nigeria and served as a wireless operator / air gunner with 76 Squadron. His crew named their Halifax 'Achtung! The Black Prince' after…
View all 13 items