Fifty two items.
One oral history interview with Peter William Arthur Jones (b. 1954) about his father Thomas John Jones DFC (b. 1921, 1640434 and 184141 Royal Air Force). Other items include photographs, his log book, correspondence, service documents, medal and a memoir. He flew operations as a flight engineer on 622 Squadron Stirling and 7 Squadron on Lancaster.

The collection has been donated to the IBCC Digital Archive by Peter Jones and catalogued by Nigel Huckins. 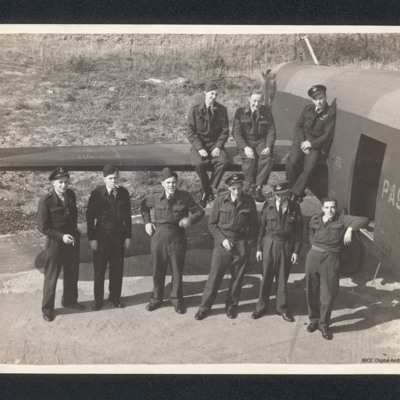 A group of aircrew and one ground crew member arranged at the rear starboard side of Lancaster PA964. Six are standing and three are sitting on the tail plane. One the reverse it is captioned with the names of the aircrew. 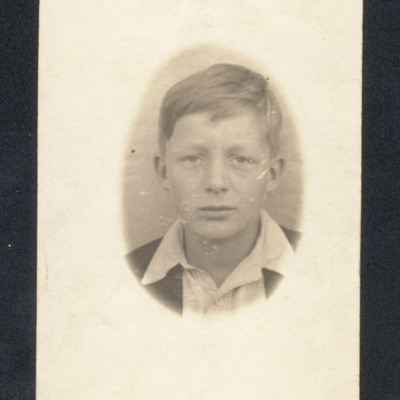 Three members of the Home Guard Three quarters portrait of three soldiers standing by a railing in front of a brick building. Tom Jones is in the centre. On the reverse 'Homeguard '40 Birmingham'. 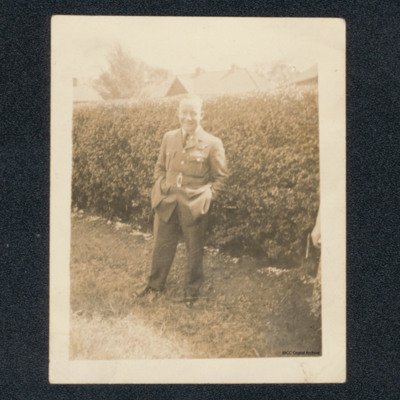 Full length portrait of Tom Jones, standing in a garden, hands in pockets. Captioned on the reverse 'with all my love darling Tom'. 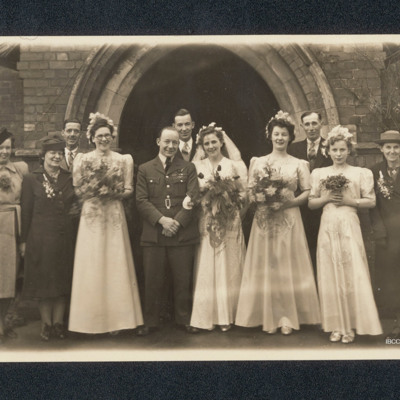 Tom Jones in uniform and his bride, Ivy, outside the church on their wedding day. They are surrounded by three bridesmaids and six family members. On the reverse '1946 Feb 2nd Hambleton Yorks Tom Jones Ivy Ridsdall' and 'Hilda'. 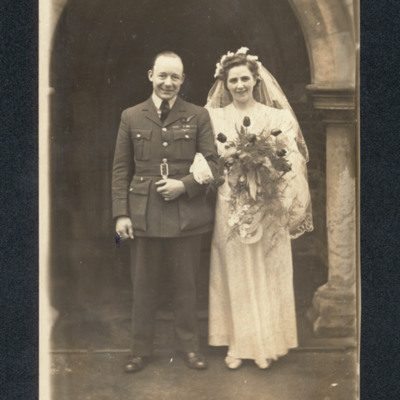 Tom Jones and his bride, Ivy Ridsdale on their wedding day, outside the church, captioned on the reverse '2.2.46 Tom Jones Ivy Ridsdale Hambleton Church Yorkshire'. 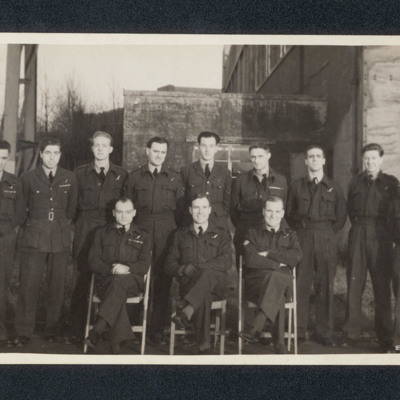 12 airmen arranged in two rows. The front three are seated with nine standing behind. Names on the reverse. 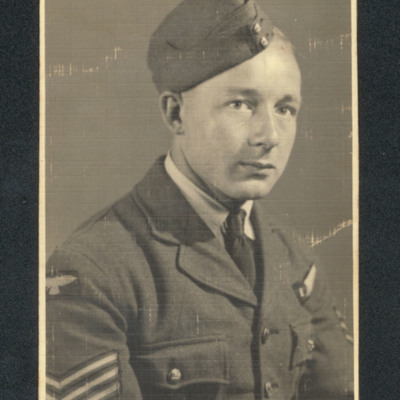 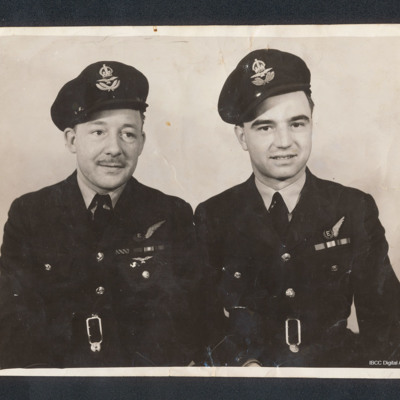 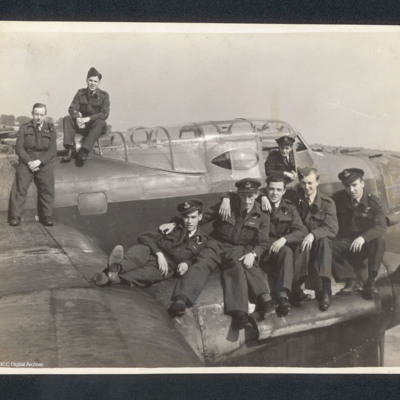 Five aircrew sitting on the starboard inner engine of Lancaster PA964, MG-K, one sitting in the cockpit and two including Tom Jones are sitting at the back of the cockpit. The individuals are named on the reverse. 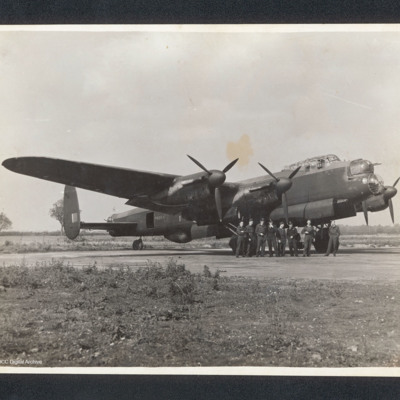 Eight aircrew, including Tom Jones, standing at the starboard side front of a Lancaster, PA964. On the reverse the aircrew are identified. 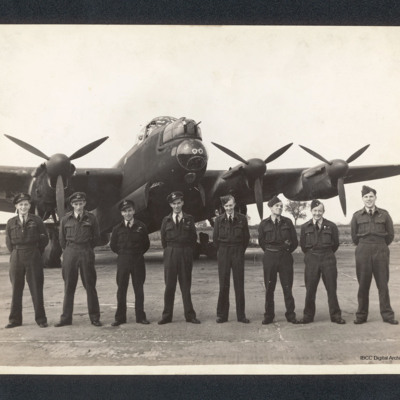 Eight aircrew, including Tom Jones, standing in front of Lancaster, PA964, 'MG-K'. On the reverse the individual members are identified. 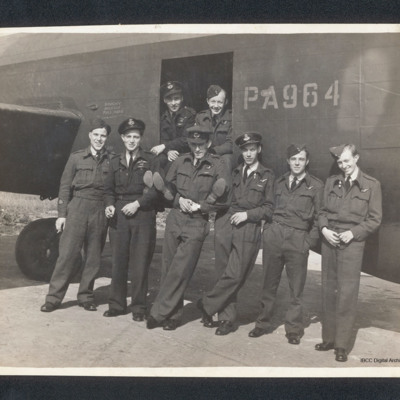 Eight airmen at the port door of a Lancaster, PA964. Two men are sitting in the door and the other six are standing or leaning on the fuselage. On the reverse are the aircrew names.' 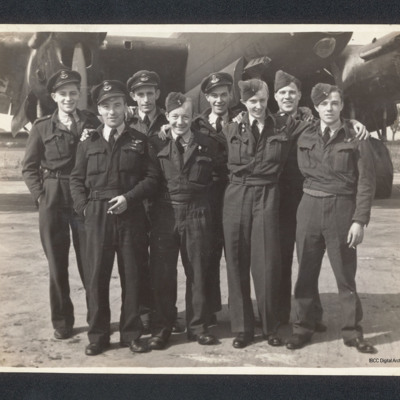 A group of eight airmen standing at the nose of a Lancaster. On the reverse are the names of the aircrew.

A starboard side view of a Lancaster, PA964, on the ground. There are eight aircrew standing at the nose. On the reverse is a list of the aircrew including Tom Jones and a list of his operations.

622 Squadron arranged in front of Stirling 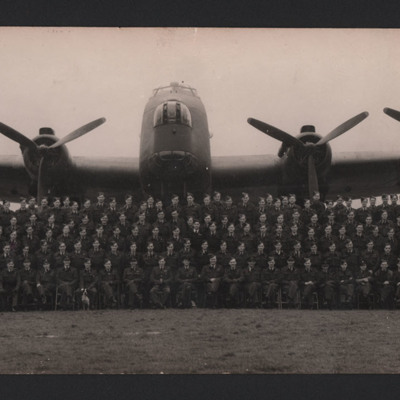