72 items. An oral history interview with Rosemary Dorricott about her husband Flying Officer Leonard William Dorricott DFM (1923-2014, 1230753, 1230708 Royal Air Force). Leonard Dorricott was a navigator with 460 and 576 Squadrons. He flew 34 operations including Operation Manna, Dodge and Exodus. He was one of the crew who flew in Lancaster AR-G -George, now preserved in the Australian War Memorial. He was a keen amateur photographer and the collection contains his photographs, logbook and papers. It also contains A Dorricott’s First World War Diary, and photographs of Leonard Dorricott’s log book being reunited with the Lancaster at the Australian War Memorial.

The collection has been loaned to the IBCC Digital Archive for digitisation by Rosemary Dorricott and catalogued by Barry Hunter. 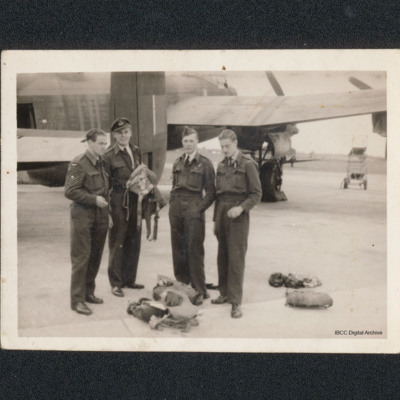 Four airmen standing at the tail of a Lancaster. Flight Lieutenant Sedgewick is holding a parachute harness and there are two more parachutes and harnesses on the ground. Leonard Dorricott is standing second from the right. An engine trestle is in…

A handwritten notebook containing the war diary of A Dorricott from October 1914. He embarks the SS Deseado at Southampton and sails through the Bay of Biscay, past Gibraltar to Malta. They continued with naval escorts to Port Said, through the Suez… 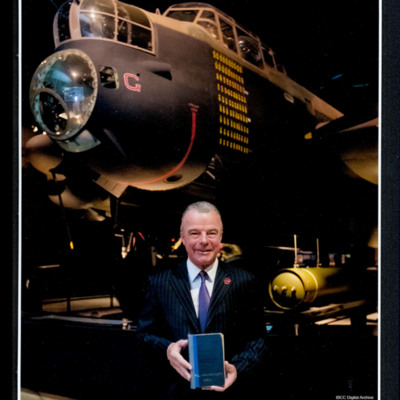 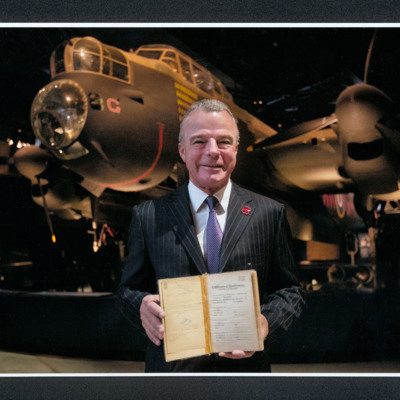 Half length portrait of Dr Brendan Nelson standing and holding Len Dorricott's log book open at the front page. Behind is Lancaster G for George at the Australian War Memorial. 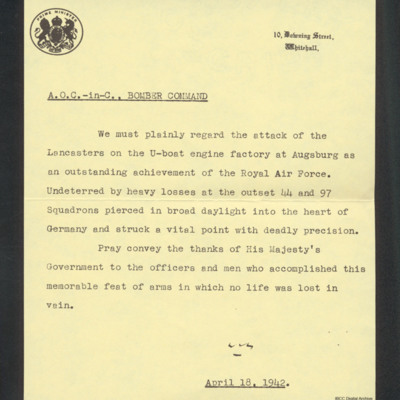 A letter from No 10 Downing Street to air officer commanding-in-chief, Bomber Command, complimenting the RAF on their success in bombing Augsburg. 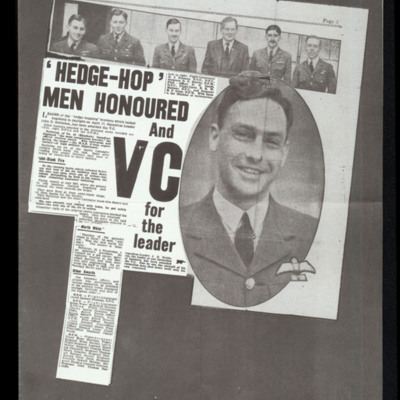 Details about the operation on the MAN u-boat engine factory in Augsburg and the decorations awarded to the crew members. 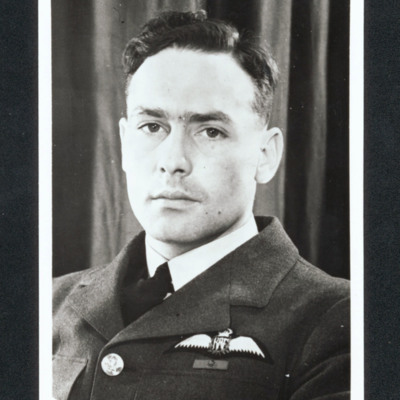 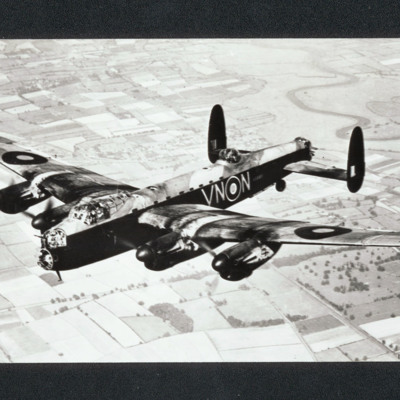 Air-to-air photograph of a Lancaster 'VN-N' in flight, taken to the front, port side and slightly above. 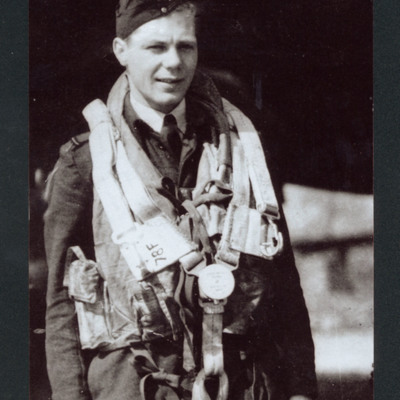 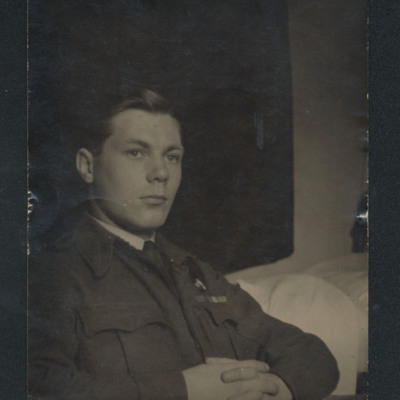 A head and shoulders portrait, slightly to one side, of Leonard Dorricott.

Four airmen standing, two squatting and one kneeling. One with the spotted toy mascot. Behind is an aircraft. They are wearing Mae Wests and parachutes. Leonard Dorricott is standing on the left and Flight Lieutenant Strachan is standing on the… 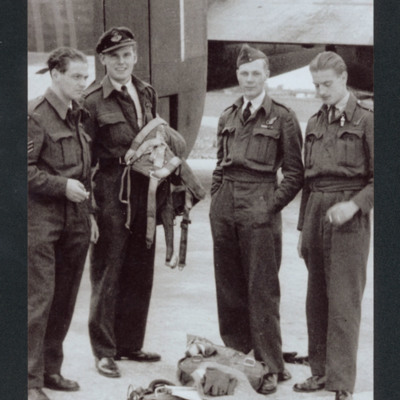 Four airmen standing at the tail of a Lancaster. One man is holding a parachute harness and there is another parachute and harness on the ground.

Aircrew and ground personnel and Lancaster 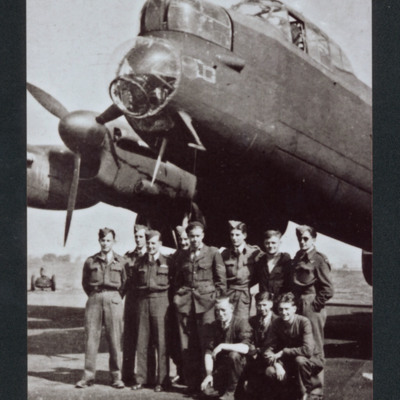 Eight airmen standing and three kneeling in front of Lancaster 'G for George'. The machine guns have been removed from the front turret. An aircrew member is standing on the right, wearing sunglasses. 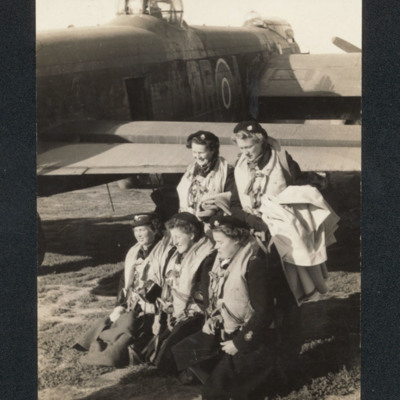 Three nurses kneeling and two standing. They are wearing Mae Wests. Behind is a Lancaster. On the reverse 'Ferrying nurses from Pomigliano Airfield, Naples.'

Lancaster over over Burghley House 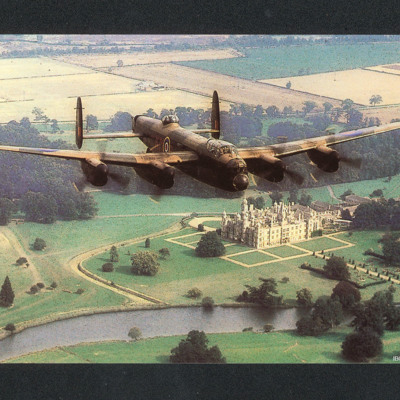 An air-to-air photograph of a Lancaster KM-B PA474 flying over a Burghley House. It shows the front/starboard side of the aircraft. 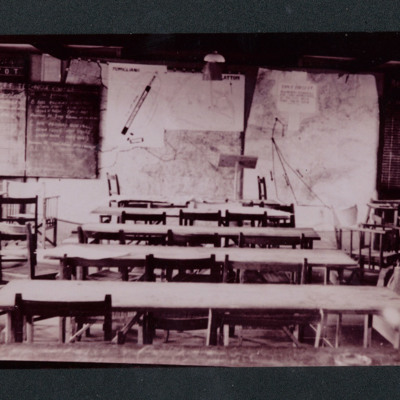 In the foreground of an operations room there are tables and chairs. In the centre is a lectern and on the walls are maps and information boards showing Pomigliano and RAF Glatton. 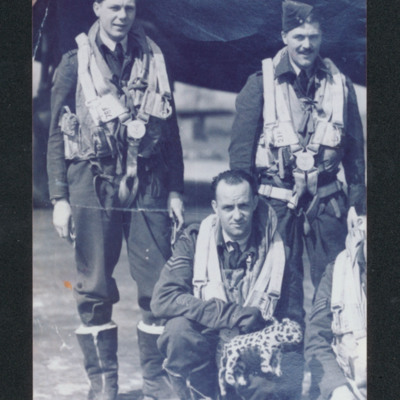 A sergeant kneeling holding a toy leopard mascot. Behind him are two airmen and further behind an aircraft. They are wearing Mae Wests and parachutes. Leonard Dorricott is standing on the left.

Additional information about this item has been… 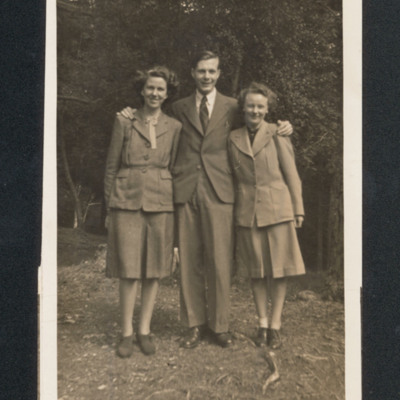 Full length portrait of Len Dorricott standing with each arm on the shoulder of a women. He is wearing a suit, collar and tie, the women wear suits with skirts. 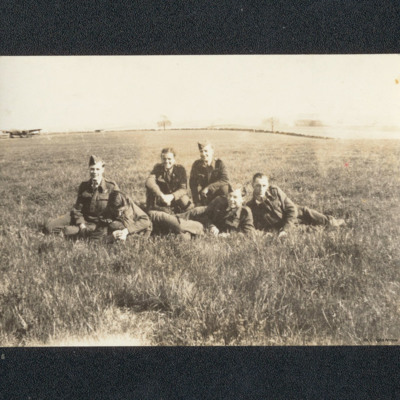 Three airmen sitting on the grass with a further three lying on it. In the background is a Lancaster. On the reverse 'Me Nav Jimmy Joyce WOP Bob Henderson Pilot (Aussie) Mug F. Eng' and 'Len Dorricott James Joyce Bob Henderson Malcolm Whitehouse… 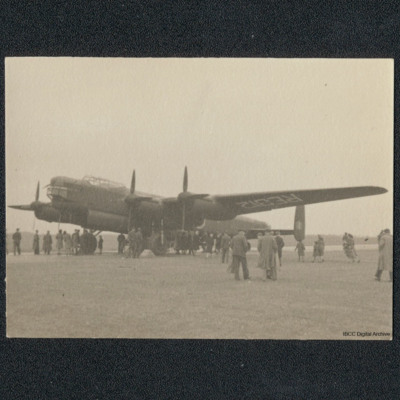 Full port side view of a Lincoln 'RE312' on the ground with bomb doors open. Groups of civilians are wandering around it. 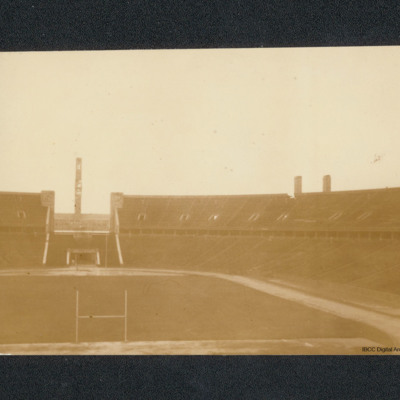 A view looking towards rugby posts with terracing around. On the reverse 'Sports Stadium, Berlin 25.10.45'. 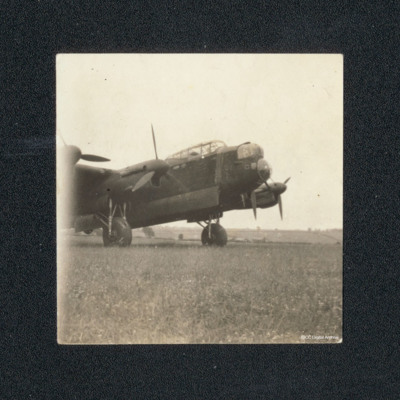 The nose of a Lancaster, starboard side. On the reverse 'Oxford press at [undecipherable] G George Dorricott'. 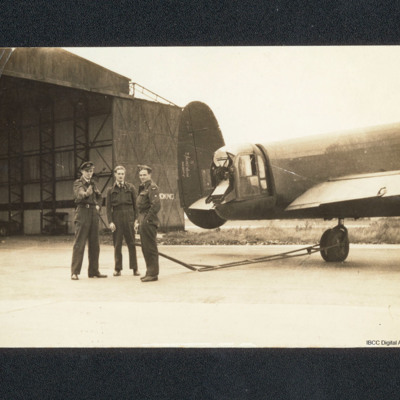 Three airmen standing at the tail of a Lancaster. A tow bar is attached to the rear wheel. The machine guns have been removed from the rear turret. Behind is an open hangar. 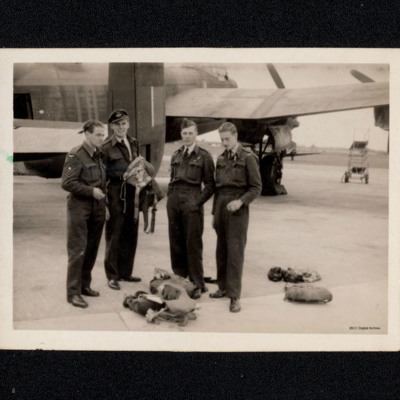 Four airmen standing at the tail of a Lancaster. Flight Lieutenant Sedgewick is holding a parachute harness and there are two more parachutes and harnesses on the ground. Leonard Dorricott is standing second from the right. An engine trestle is in… 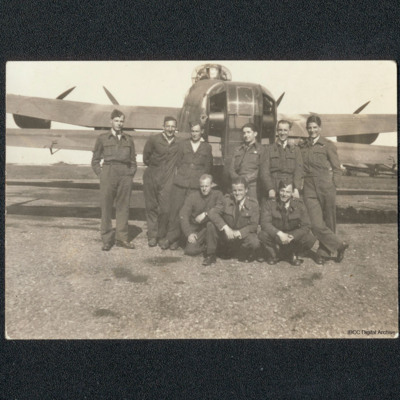