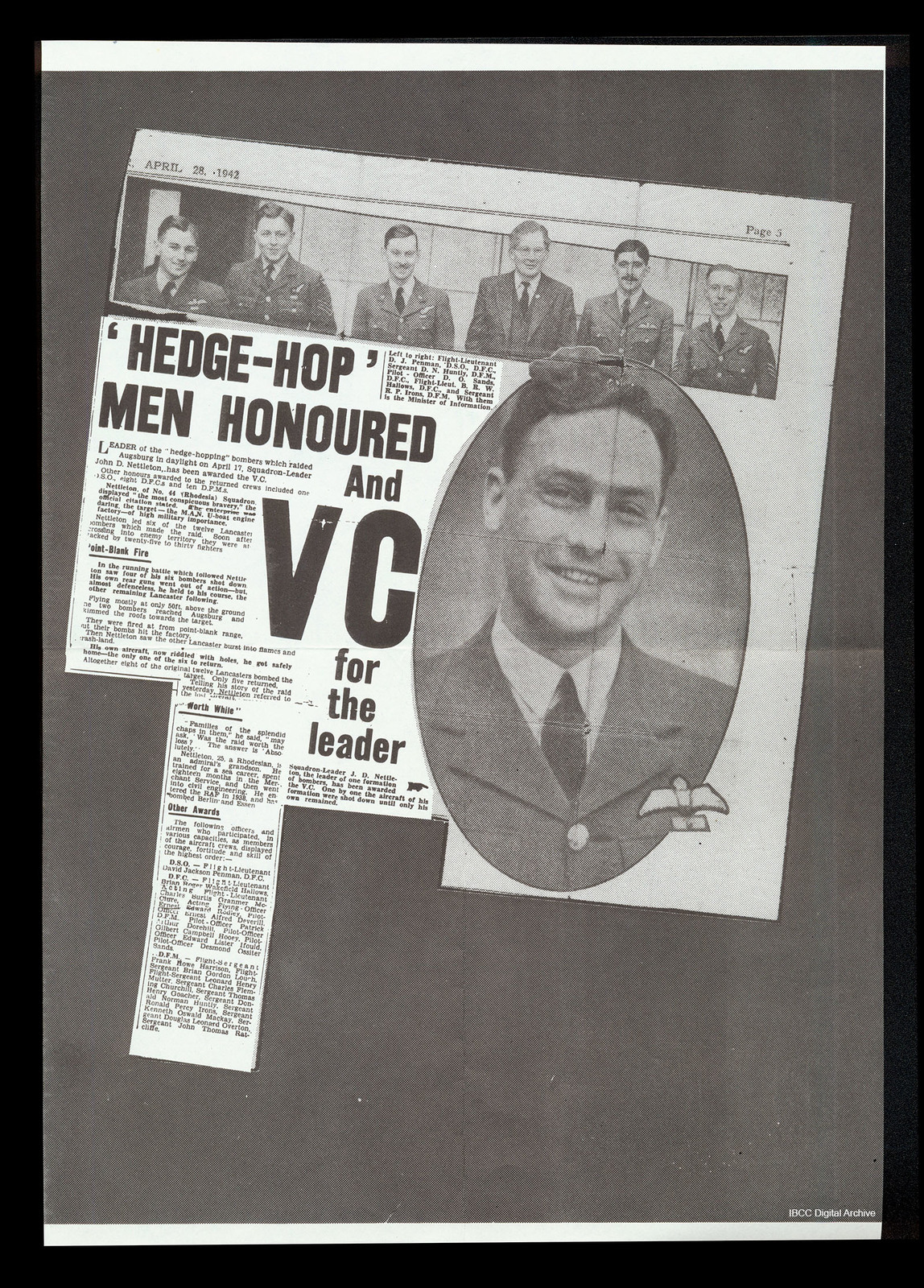 Details about the operation on the MAN u-boat engine factory in Augsburg and the decorations awarded to the crew members.

APRIL 28, 1942 Page 5
Left to right: Flight-Lieutenant D. J. Penham, D.S.O., D.F.C., Sergeant D. N. Huntly, D.F.M., Pilot - Officer D. O. Sands, D.F.C., Flight-Lieut. B. R. W. Hallows, D.F.C., and Sergeant R. P. Irons, D.F.M. With them is the Minister of Information.
[inserted]a large oval photograph[/inserted]
Squadron-Leader J. D. Nettleton, the leader of one formation of bombers, has been awarded the V.C. One by one the aircraft of his formation were shot down until only his own remained.[symbol] image of a finger pointing to the photo [/symbol]
‘HEDGE-HOP’ MEN HONOURED AND VC for the leader[sic]
LEADER of the “hedge-hopping” bombers which raided Augsburg in daylight on April 17, Squadron-Leader John D. Nettleton,.has been awarded the V.C.
Other honours awarded to the returned crews included one D.S.O., eight D.F.C.s and ten D.F.M.s.
Nettleton, of No. 44 (Rhodesia) Squadron, displayed “the most conspicuous bravery,” the official citation stated. The enterprise was daring, the target - the M.A.N. U-boat engine factory - of high military importance.
Nettleton led is of the twelve Lancaster Bombers which made the raid. Soon after crossing into enemy territory they were attacked by twenty-five to thirty fighters
{underlined]Point-Blank Fire[/underlined]
In the running battle which followed Nettleton saw four of his six bombers shot down. His own rear guns went out of action - but, almost defenceless, he held to his course, the other remaining Lancaster following.
Flying mostly at only 50ft. above the ground the two bombers reached Augsburg and skimmed the roofs towards the target.
They were fired at from point-blank range, but their bombs hit the factory.
Then Nettleton saw the other Lancaster burst into flames and crash-land.
His own aircraft, now riddled with holes, he got safely home - the only one of the six to return.
Altogether eight of the original twelve Lancasters bombed the target. Only five returned.
Telling his story of the raid yesterday, Nettleton referred to the lost aircraft [missing]
[underlined]”Worth While”[/underlined]
“Families of the splendid chaps in them,” he said, “may ask, ‘Was the raid worth the loss? The answer is ‘Absolutely.’
Nettleton, 25, a Rhodesian, is an admiral’s[sic] grandson. He trained for a sea career, spent eighteen months in the Merchant Service, and then went into civil engineering. He entered the RAF in 1934, and has bombed Berlin and Essen
[underlined]Other Awards{/underlined]
The following officers and airmen who participated, in various capacities, as members of the aircraft crews, displayed courage, fortitude and skill of the highest order:-
D.S.O. - Flight-Lieutenant David Jackson Penman, D.F.C.
D.F.C. - Flight-Lieutenant Brian Roger Wakefield Hallows, Acting Flight-Lieutenant Charles Curtis Granmer McClure, Acting Flying-Officer Ernest Edward Rodley, Pilot-Officer Ernest Alfred Deverill, D.F.M., Pilot-Officer Gilbert Campbell Hooey, Pilot-Officer Edward Lister Ifould, Pilot-Officer Desmond Ossiter Sands.
D.F.M. - Flight-Sergeant Frank Howe Harrison, Flight-Sergeant Brian Gordon Louch, Flight-Sergeant Leonard Henry Mutter, Sergeant Charles Fleming Churchill, Sergeant Thomas Henry Goacher, Sergeant Donald Norman Huntly, Sergeant Ronald Percy Irons, Sergeant Kenneth Oswald Mackay, Sergeant Douglas Leonard Overton, Sergeant John Thomas Ratcliffe.