17 items. The collection concerns Pilot Officer Charles Reginald Jaques (1913-1943, 136865 Royal Air Force) and contains a letter, his history, personnel document, items concerning his wedding, the names of the his crew's next of kin, condolence letter and nine photographs. The collection also contains an oral history interview with Susan Carol Doreen Chapman about her father, Charles Reginald Jaques. Reg Jaques was a navigator flying in Lancasters with 103 Squadron, RAF Elsham Wolds in 1943. He was killed along with his crew in a collision with another Lancaster on 16 December 1943.

The collection has been loaned to the IBCC Digital Archive for digitisation by Susan Chapman and catalogued by Nigel Huckins.

Additional information on Reg Jaques is available via the IBCC Losses Database. 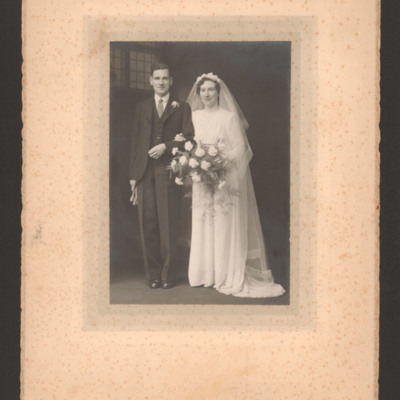 Full length portrait of Reg Jaques and his bride. Reg is on the left wearing dark suit with button hole. His bride is on the right wearing a white wedding dress with raised veil and holding a large bouquet of flowers. Her right hand is holding on to… 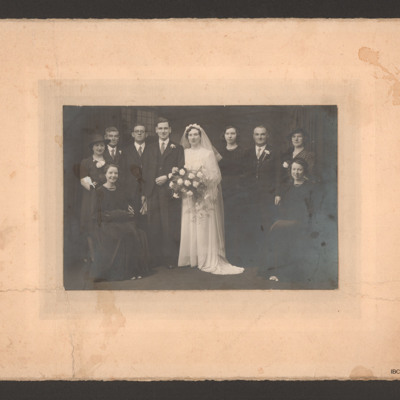 Reg and Gwendoline Jaques stand in the centre of group of eight other people, four either side. Mrs Jaques is wearing a white wedding dress with raised veil and is holding a large bouquet of flowers. Reg Jaques is wearing a dark suit with buttonhole.… 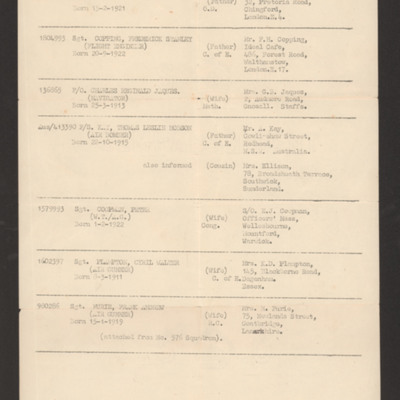 Details of names and next of kin with addresses of the crew of Lancaster JB670 including Charles Reginald Jaques. 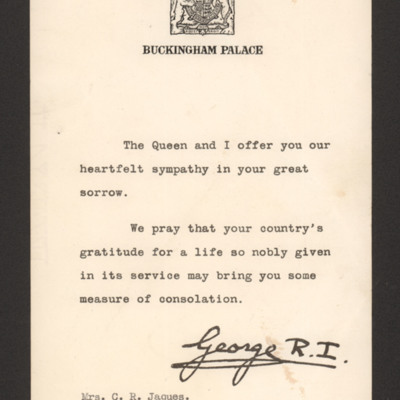 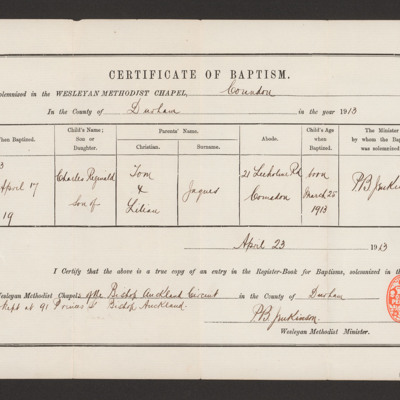 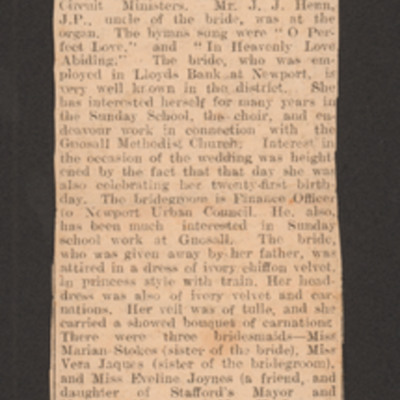 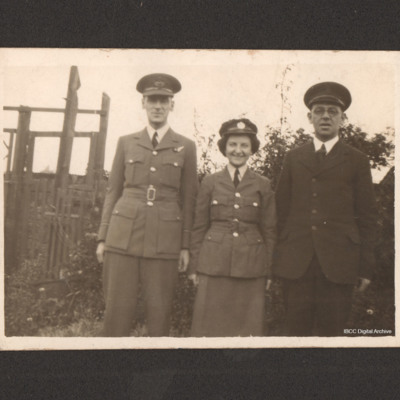 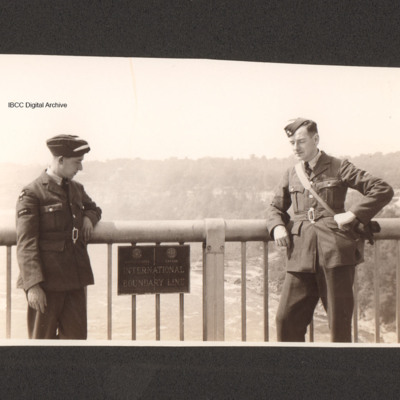 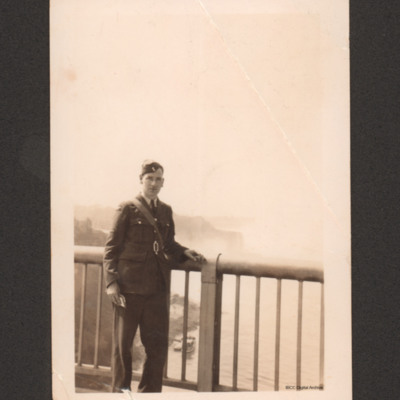 On the left Reg Jaques wearing tunic and side cap is standing with his hand on top of a metal barrier on a bridge. In the background a river bank with a boat and trees. On the reverse 'Reg Jaques 1942 Canada'.

Reg Jaques on a bicycle 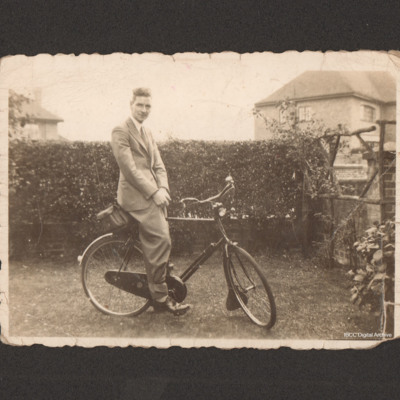 Reg Jaques in light suit sitting on a stationary bicycle in a garden. In the background a hedge, fence and two houses. On the reverse 'Charles Reginald Jaques' 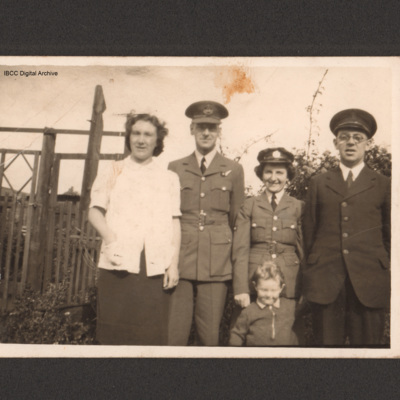 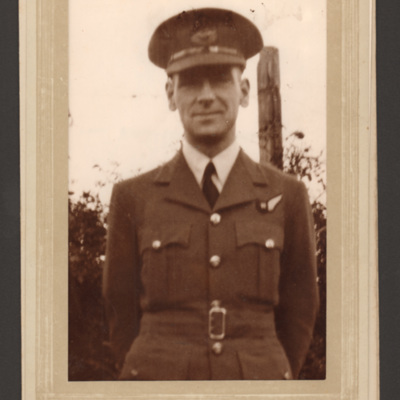 Half length portrait of Reg Jaques wearing tunic with navigator brevet and peaked cap standing with his arms behind his back. In the background, trees and a post. On the reverse 'Charles Reginald Jaques, killed 16 December 1943. 54 airmen and officers in six rows wearing tunic and side caps in an arched doorway with glass panels. Doorway is in a brick building. On the reverse 'No 1 E.A.O.S, Eastbourne 29.4.42, 3rd row 4th from the left, Charles Reginald Jaques'. 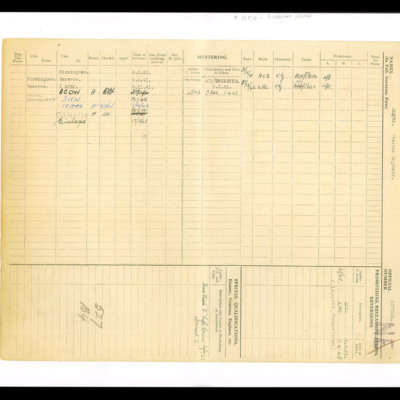 Contains personal details and postings as an airman. Discharged as airman 12.12.42 when offered a commission.

Account of wartime service of Charles Reginald Jaques who joined the Royal Air Force in 1941 despite being in a reserved occupation. Includes training as a navigator in Canada and Great Britain, his commission, posting to 103 Squadron at Royal Air…

Letter from Reg Jaques to a female relative 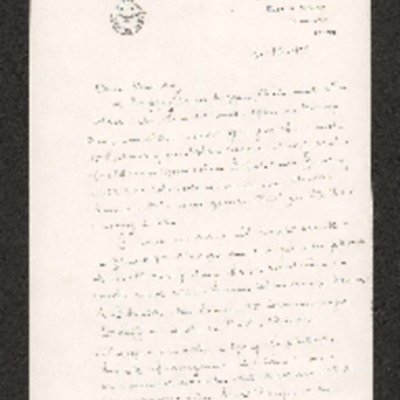 Letter to Brenda dated 15 December 1943 from RAF Elsham Wolds relating life on the station and mentioning shopping for gifts in Scunthorpe, a bout of flu, a shortage of coal and upcoming leave.

Susan Chapman talks about her father, Charles Reginald Jaques. Reg Jaques grew up in County Durham and to improve his prospects for employment he studied by the light of the streetlight. He secured a job with a local authority in Shropshire. He met…
View all 17 items