Three items. The collection concerns Leading Aircraftwoman Ruth Johnston (447142, Royal Air Force) and contains her wartime sketchbook of cartoons and two photographs. She served in the parachute and dinghy sections at RAF Thornaby.

The collection has been donated to the IBCC Digital Archive by Barbara Armstrong and catalogued by Barry Hunter. 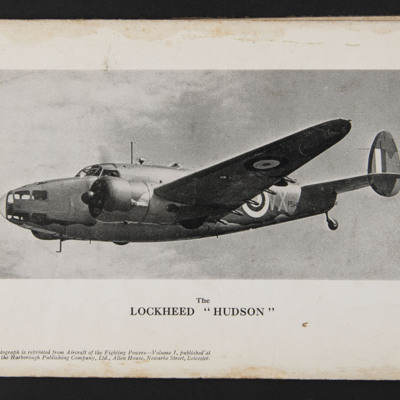 A port side air-to-air view of a Hudson. 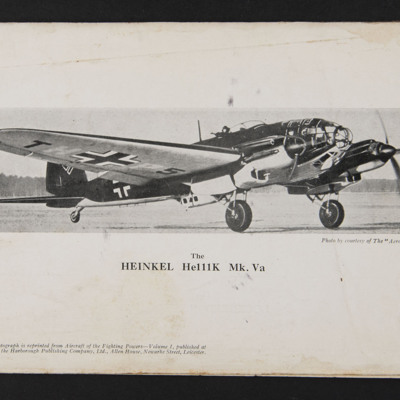 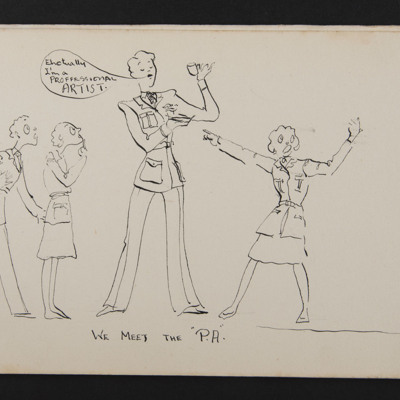 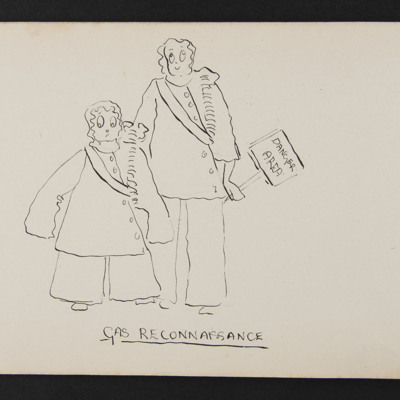 A cartoon of two women in protective clothing, one carrying a sign saying 'Danger Area'. 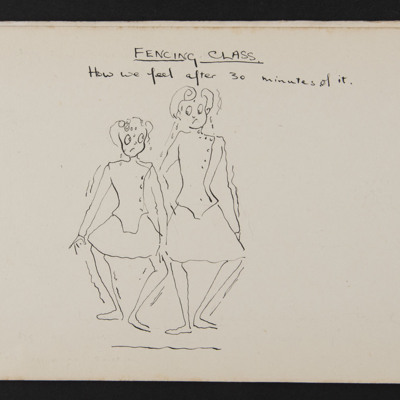 A cartoon of two women dripping in sweat and wobbly at the knees captioned 'How we feel after 30 minutes of it'. 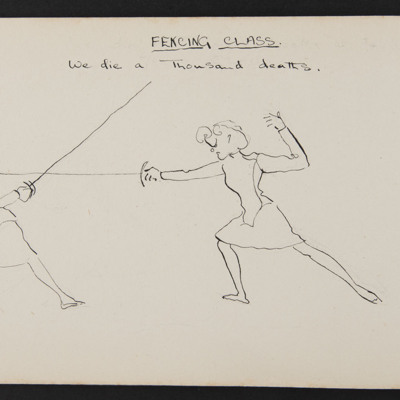 A cartoon of two women fencing, captioned 'We die a thousand deaths'. A cartoon of two WAAFs with throbbing arms after being inoculated by a medical officer. 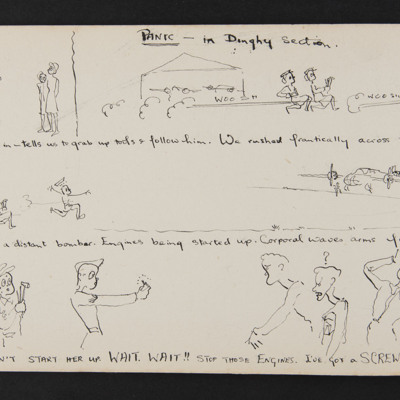 A cartoon depicting an emergency where a corporal gets the WAAFs to rush to an aircraft to install a single crew. 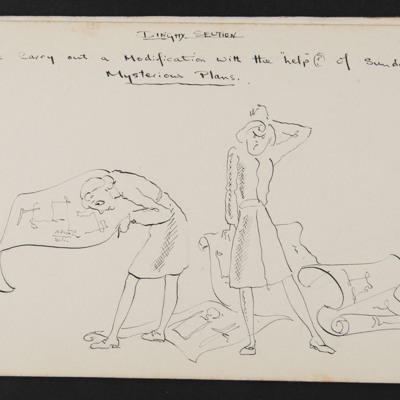 A cartoon of two WAAFs confused by dinghy drawings, captioned 'We carry out a modification with the "help"? of Sundry Mysterious Plans'. 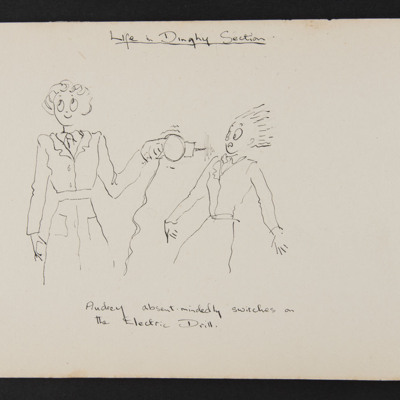 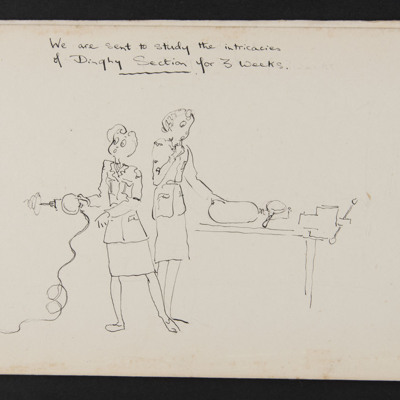 A cartoon of two WAAFs working on dinghies.

We have to make all Travelling Bags with the AM Stamp 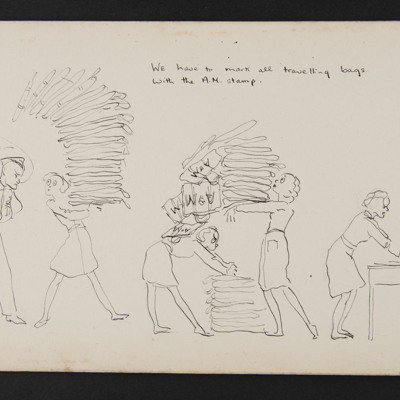 A cartoon of four WAAFs collecting travelling bags whilst an airman is shouting for his parachute bag. 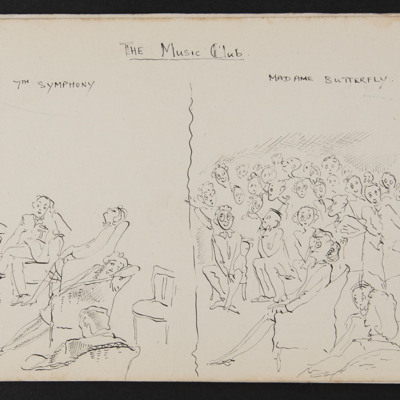 A cartoon of the audiences listening to Beethoven's 7th Symphony and Madame Butterfly. 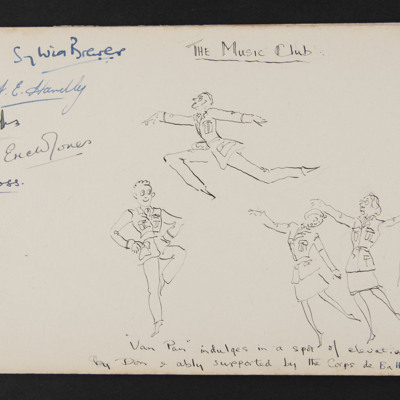 A cartoon of men and women dancing, annotated ' "Van Pan" indulges in a spot of elevation assisted by Don & ably supported by the Corps de Ballet'.
There are six signatures on the page.

Fun and Games with the ATC 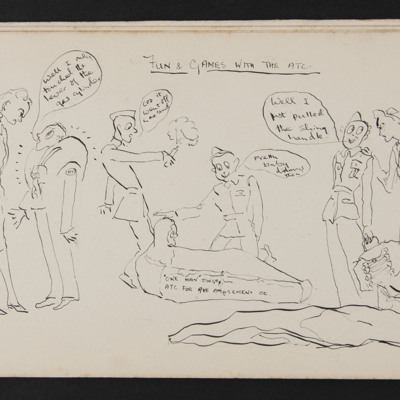 A cartoon of various mishaps with parachutes, life rafts, flares and lifejackets. 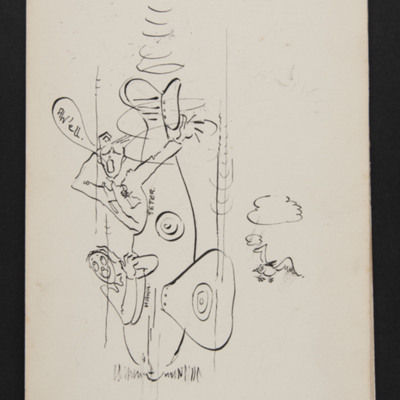 A cartoon of an aircraft diving vertically to the ground. Hank is relaxed but in the back Peter is saying 'Aw 'ell'. 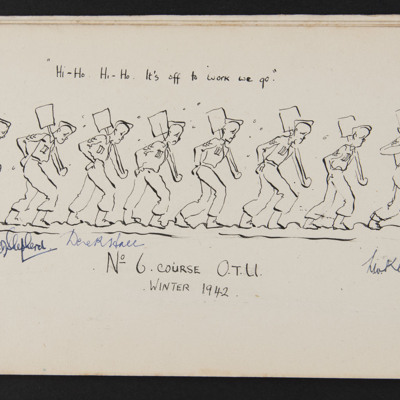 A cartoon of seven airmen with shovels over their shoulders being led by an eighth with a large moustache. They are singing 'Hi-ho hi-ho Its off to work we go'. Four of the men have signed their names.

The Man who didn't want a Parachute Bag 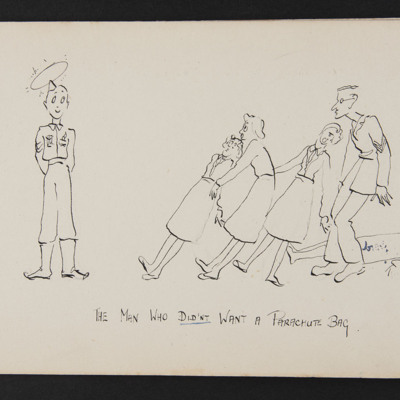 A cartoon of an airman with a halo and four WAAFs fainting because he did not want a parachute bag. 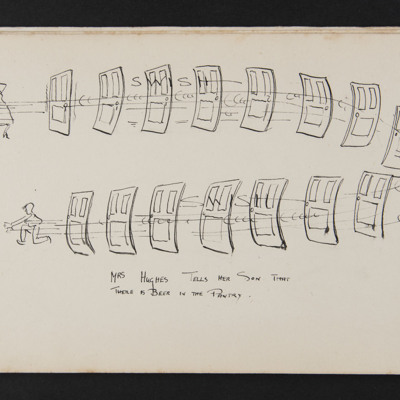 A cartoon of Hughes crashing through 15 doors to reach two bottles of beer.

Our Temporary but Terrific Boss 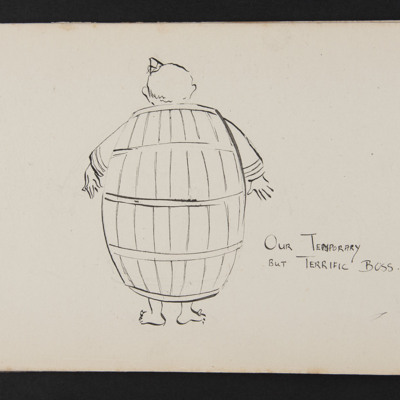 A cartoon of an airman inside a barrel, seen from the back. 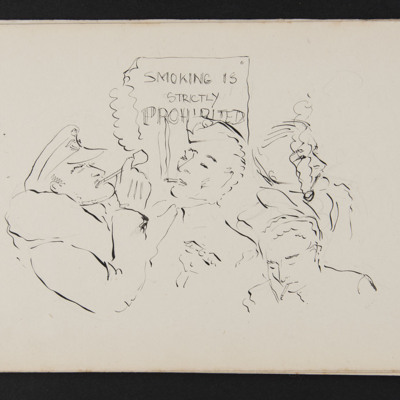 A cartoon of four airmen smoking pipes and cigarettes beside a sign prohibiting smoking.

Just Look at my Grate 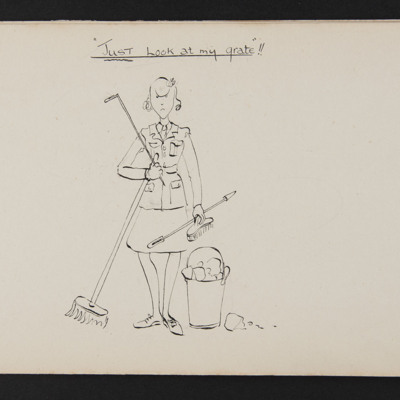 A disgruntled WAAF with a bucket, brushes and pokers. She comments 'Just look at my grate'. 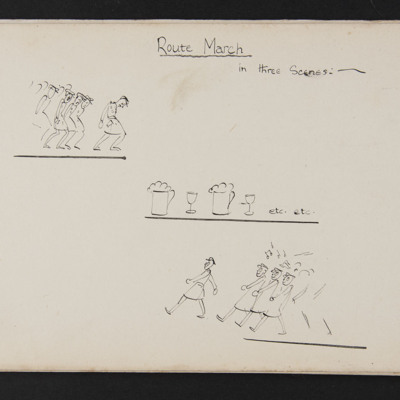 A cartoon of the WAAFs on a route march. First they are all worn out, then they have beer and drinks and finally they are marching very properly.

Taking Chutes to the Flights 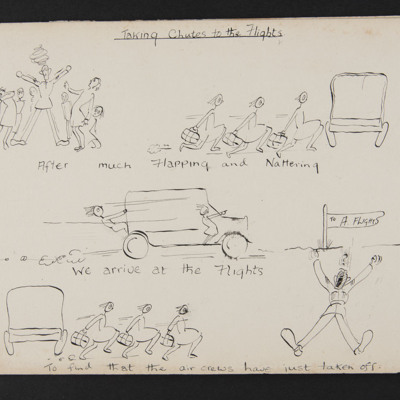 A cartoon of the parachute packers delivering parachutes to air crews only to find they have already taken off. Annotated 'After much flapping and nattering we arrive at the flights to find that the air crews have just taken off'. 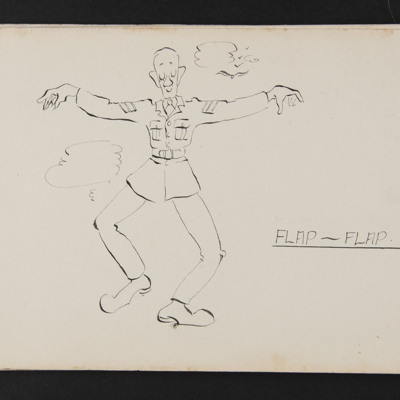 A cartoon of a corporal with his eyes closed and his arms outstretched like a bird. He is 'flying' amongst clouds.
View all 38 items