The collection has been donated to the IBCC Digital Archive by Chris Jones and catalogued by Nigel Huckins. 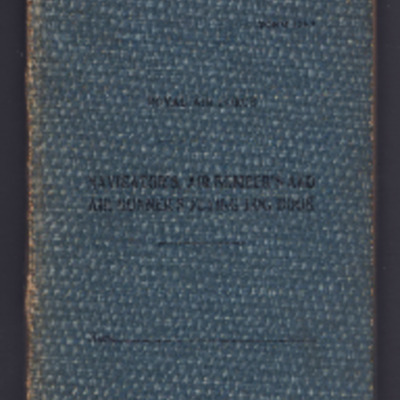 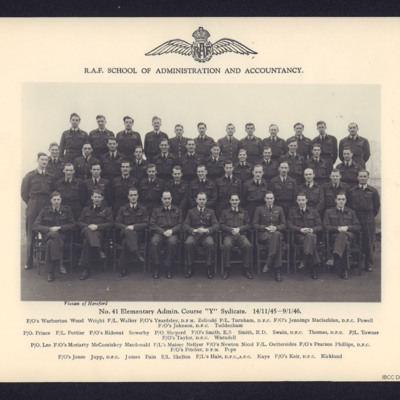 Titled 'RAF School of Administration and accountancy' and captioned 'No 41 Admin Course "Y" Syndicate 14/11/45-9/1/46'. Forty-six RSF officers wearing battledress or tunics many with brevet sitting and standing in four rows. 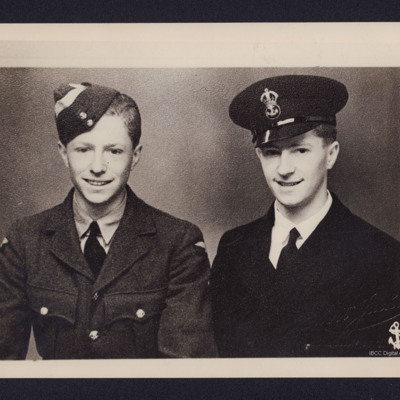 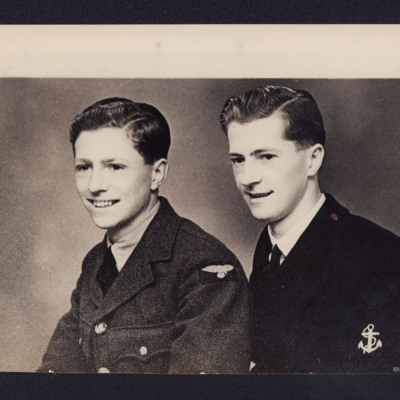 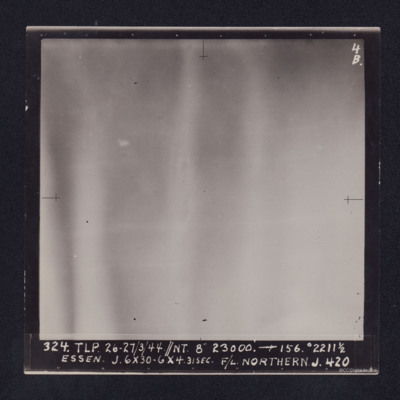 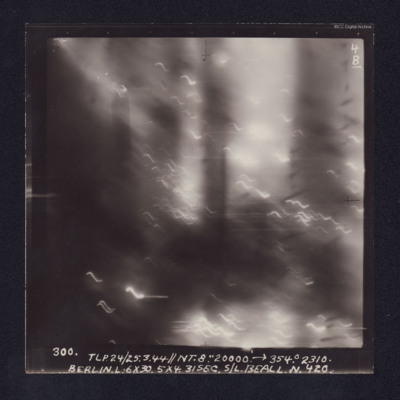 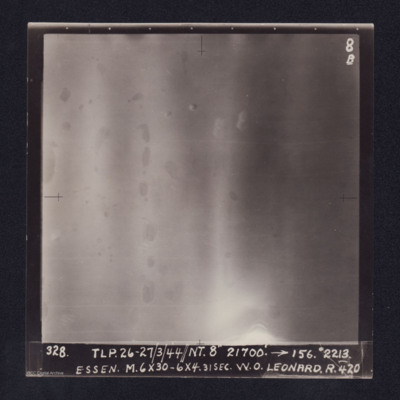 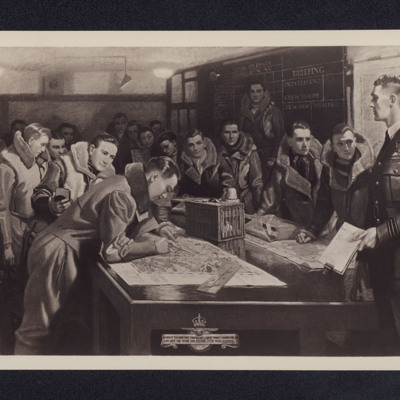 Artwork of aircrew in flying clothes gathered round a planning table with maps and pigeons in their baskets. They are being briefed by a wing commander wearing tunic with pilot's brevet, another flight lieutenant pilot stands behind him. RAF badge at… 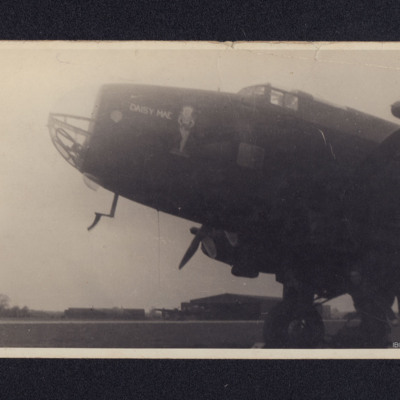 View of the front fuselage of a Halifax parked on an airfield. Nose art woman in short skirt and text "Daisy Mae". In the distant background a hangar with Halifax outside. On the reverse 'Daisy Mae'. Two airmen, one on the right wearing tunic with brevet and sergeant rank, the one on the left wearing battledress and smoking a cigarette sitting on bombs on bomb trolley under a Halifax. 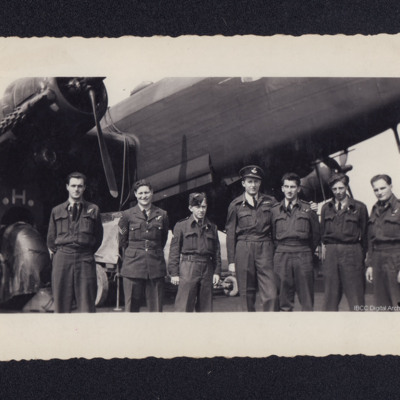 Seven aircrew wearing battledress with brevet standing in line in front of a Halifax. 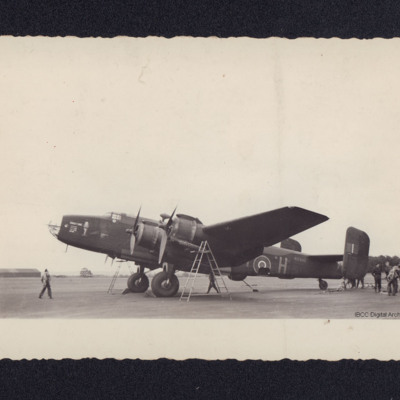 Side view of a Halifax Daisy Mae MZ540 letter "H" parked on dispersal. There is one man standing in front and a group of others behind the tail plane. 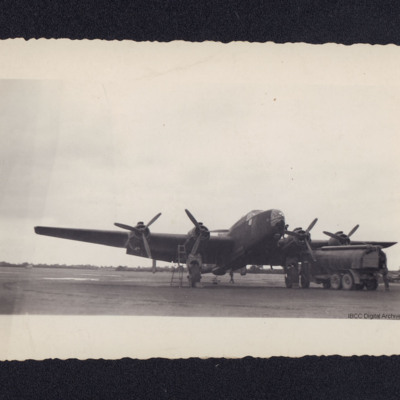 Front quarter view of a Halifax parked on an airfield. A petrol bowser is parked in front of the port wing and there is a step ladder by the starboard inner engine. 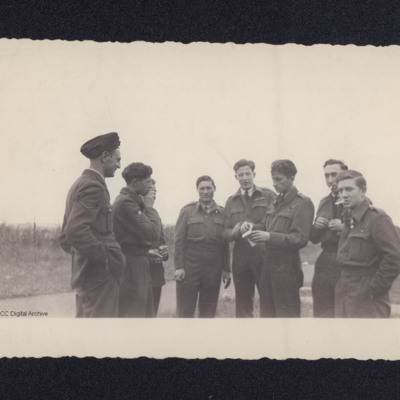 Eight airmen. one wearing tunic and the others battledress (some with visible brevet) standing in a group. Two are smoking cigarettes and one is taking cigarette out of a packet.

Airmen sitting by a Halifax Five airmen sitting on the ground in the shade from the rear fuselage of a Halifax. There is one bomb trolley under the port wing and another under the bomb bay. Step ladders and maintenance platforms in front of the port wing. Side view of Halifax MZ540 PT-H parked on dispersal. Part of another aircraft in the background right. A bomb trolley and bicycles underneath the fuselage. 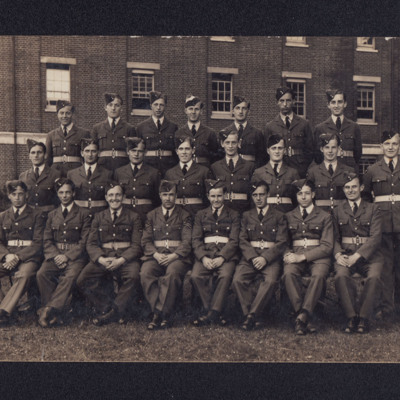 Twenty-three airmen wearing tunic with white belts and side caps sitting and standing in three rows with a two storey with two storey brick barrack building with windows behind. On the reverse several signatures. 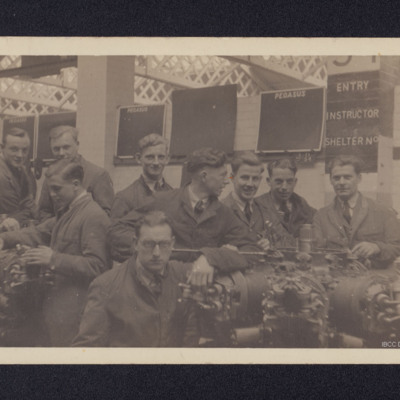 Nine airmen wearing dust coats over uniform in a workshop gathered round aircraft engines. On the wall behind blackboards with 'Pegasus' printed on them.
On the reverse '98 Entry B Class Halton 7.5.43' and 12 signatures. Four airmen wearing tunics with brevet, two with visible sergeants rank, all standing in a row leaning on a park railing with trees in the background. Three are smoking. An airman is guiding a bomb being winched up into a bomb bay. A bomb trolley on the right and bicycles behind. 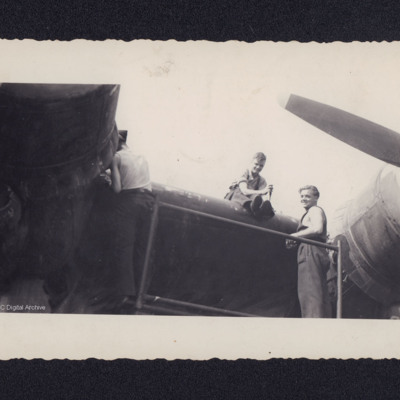 On the left, an airman standing on platform has his head behind a Halifax engine Another airman stands on the platform to the right while another sits on the wing between engines. An armourer guiding a bomb being winched into a bomb bay. Another airman stands to the left and part of the bomb trolley is visible on the right. 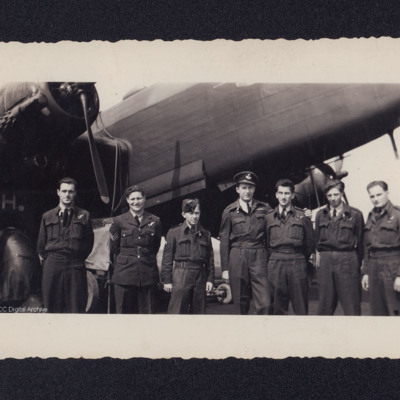 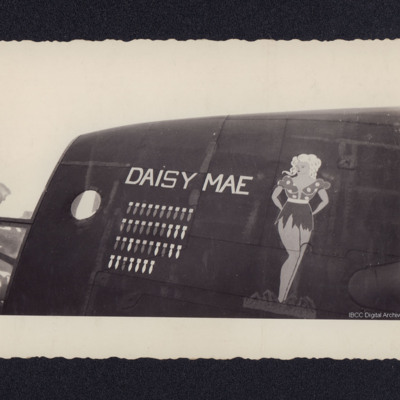 Cartoon of a lady with short skirt with name 'Daisy Mae'. Four rows of bomb symbols under the name. 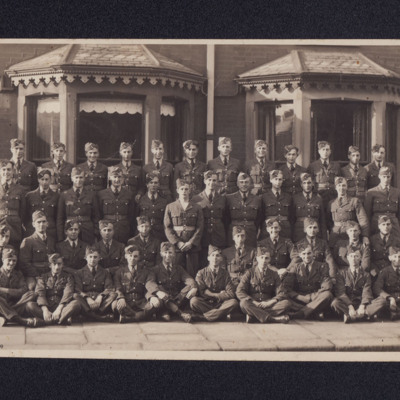 Forty-four airmen, all wearing tunics and side caps, sitting and standing in four rows in front of a building with bay windows. One man in the centre of the photograph has a tunic but is not wearing a shirt or tie.
View all 32 items