24 items. The collection consists of one oral history interview with Royal Australian Air Force pilot Arthur Atkins, his logbook and 23 photographs. Arthur Atkins grew up in Melbourne, Australia and joined the RAAF. After training he flew 32 operations with 625 Squadron from RAF Kelstern.

The collection has been loaned to the IBCC Digital Archive for digitisation by Arthur Atkins and catalogued by Nigel Huckins. 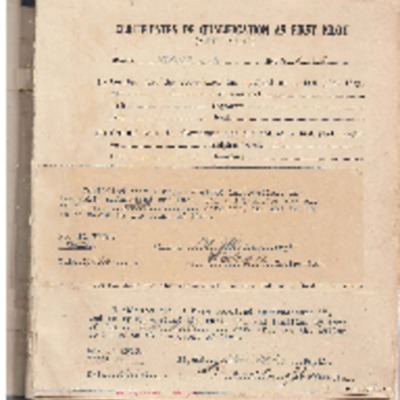 Arthur Atkins grew up in Melbourne, Australia. As a Boy Scout, he experienced a flight in an aircraft and knew he wanted to be a pilot. He transferred from the army to the Royal Australian Air Force and started pilot training in Australia. He… 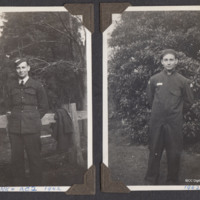 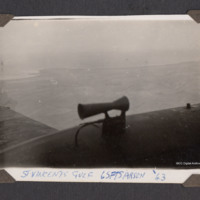 Aerial inclined photograph of St Vincent's Gulf take from an Anson. In the foreground the top of the port engine with a Venturi tube. In the background land, coast and sea. Caption 'St Vincent's Gulf 6SFTS Anson 43'. 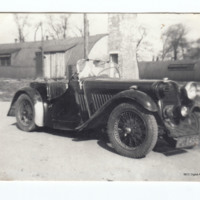 Two seat open topped sports car with hood down parked on road facing right in front of Nissen hut. In the background another Nissen hut and trees. On the reverse '1934 Singer 9 Lemans 2 seater ar RAF Sandtoft, Yorkshire England May or June 1945'.

Three quarter length portrait of Arthur Atkins in uniform carrying peaked cap and gloves alongside his bride in wedding dress. In the background part of sword honour guard and other wedding guests. Caption 'Dec 1942'

Two women in civilian clothes standing in a garden with Goring Castle, Worthing in the background. Caption 'Worthing Sussex'. 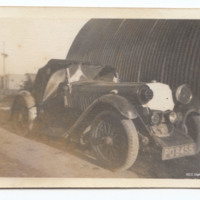 A soft top sports car with the roof up, registration PO 8455, standing in front of an arched corrugated iron building. In the background other buildings on the reverse '1934 Singer Lemans, RAF Kelstern, Lincolnshire, Winter 44/45, 625 Squadron'

Dave Browne in front of thatched cottage at Chieveley

A pilot standing in battledress uniform leaning against a brick wall. In the background a thatched cottage. Caption 'Dave Browne, Chieveley'.

Betty on a beach 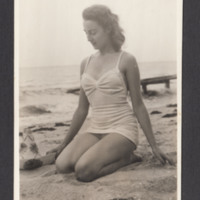 A woman kneeling on a beach wearing swimming suit. In the background the sea. Caption 'Betty'.

Arthur Atkins with Betty on beach 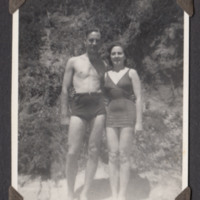 Arthur Atkins standing with a woman with their arms around, both in swimming suits on a beach. In the background vegetation covered slope. Captioned 'AHA, Betty'. 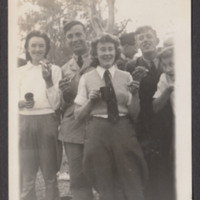 A group of men in uniform and women in civilian clothes standing while eating. Arthur Atkins is in uniform tunic and side cap second from the left. In the background a tree. Captioned 'Benalla 1942', 'Joan Johnson, AHA, Russ Clark'. 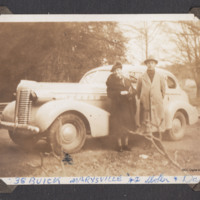 A man and a women standing in civilian clothes in front of a car. In the background trees. Caption '38 Buick, Marysville 42, Mother and Dad'.

Half length portrait of Sergeant Arthur Atkins standing in uniform wearing side cap. On his uniform a pilot's brevet and sergeants rank stripes. In the background a house and trees. Captioned 'Worthing Sussex'.

Pilot in garden at Ivanhoe 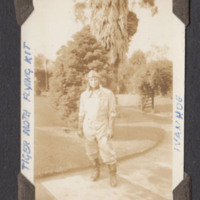 A pilot wearing flying suit, helmet and goggles standing on a footpath in a garden. In the background lawns and trees. Captioned 'Tiger Moth Flying Kit', 'Ivanhoe, April 43', 'Ivanhoe'. 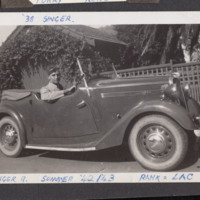 Arthur Atkins wearing uniform tunic and side cap sitting in the diving seat of an open topped car. In the background a lattice fence and a vegetation-covered wooden building. Caption '38 Singer, Singer 9, Summer 42/43, Rank LAC'. 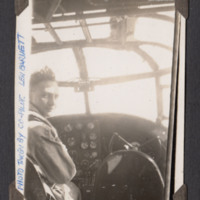 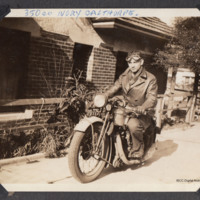 Arthur Atkins wearing a leather coat and goggles sitting on a motorbike. In the background a low fence and brick house. Captioned '350cc Ivory Calthorpe'. 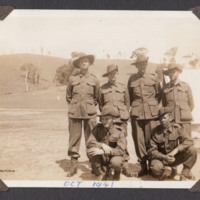 Six airmen in uniform tunic and slouch hats. Two are squatting in front and four standing to the rear. In the background part of a tent and a very sparsely wooded hillside. Captioned 'Oct 1941' 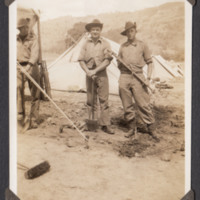 Three men standing in uniform with slouch hats holding shovels and pickaxe. Arthur Atkins is in the centre. In the immediate background a row of tents, in the far background a sparsely wooded hill. Captioned '1941' 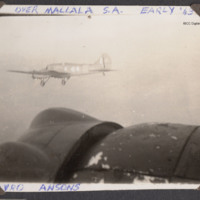 Air-to-air view of an Anson taken from another one. In the foreground part of the top of the starboard engine. Captioned 'Over Mallala SA early 43, Avro Ansons'. 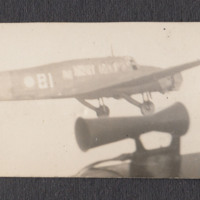 Air-to-air view of an Anson with figure '81' in front of roundel taken from another Anson. In the foreground, Venturi tube on top of port engine. Arthur Atkins in front of a thatched building 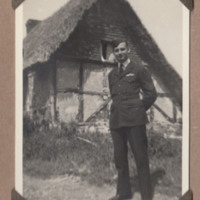 Arthur Atkins standing in uniform and wearing side cap. On his tunic a pilot's brevet and sergeant's stripes. In the background a thatched building.
View all 24 items