47 items. The collection concerns Flying Officer Oliver Herbert Bell (1915 - 1997) and consists of photographs and documents. He served as ground personnel at RAF Cranwell and was then posted to Aden and the Middle East with 12(B) and 8(B) Squadrons before the war. He later served at establishments in Canada and at RAF Blyton and married Joyce Bell.

The collection was loaned to the IBCC Digital Archive for digitisation by G Sadler and catalogued by Barry Hunter. 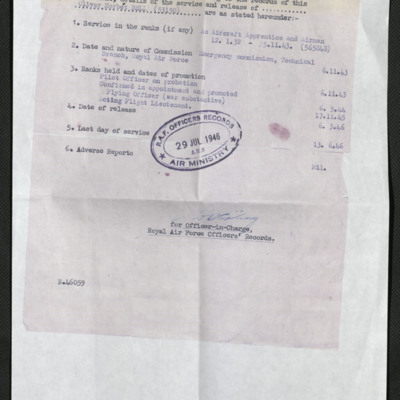 A certificate releasing Oliver from service.

Operations in the Aden Protectorate and Air Operations Round Aden Two newspaper cuttings with an explanation of the RAF's activities in Aden. 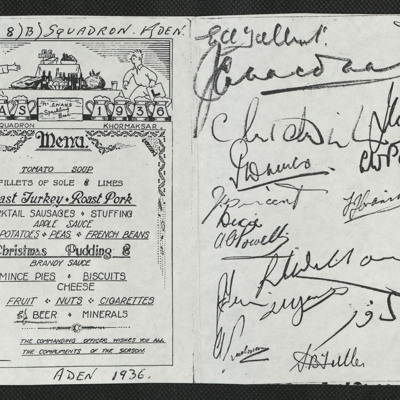 A menu for a Christmas dinner at 8 (B) Squadron. It is signed by some of the airmen who took part. 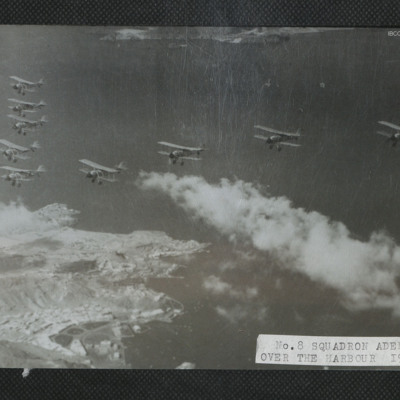 A flight of nine Vickers Vincents flying over Aden Harbour. 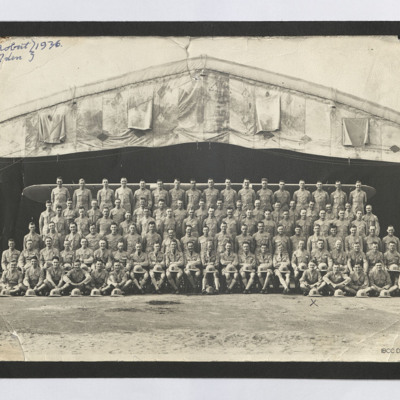 A group of airmen arranged in five rows in front of an aircraft and a tented hangar. Oliver is marked with a small cross. 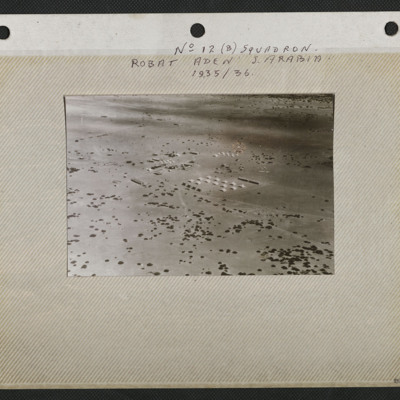 17 Airmen and a Model Ship 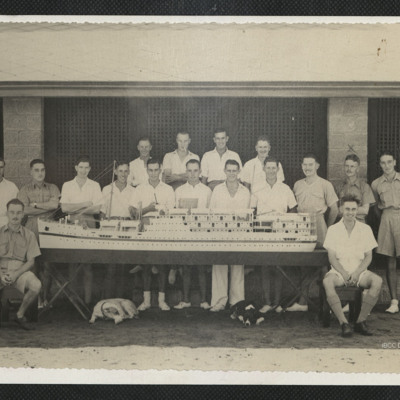 17 airmen, two dogs and a large model ship. The men are in tropical kit. Oliver is marked with a small cross above his head. On the reverse is handwritten 'Model of the ship Oliver (Dad) went to Aden on. (Approx age 18/19) 2nd in from right - back…

12 Squadron's Move from Khormaksar to Robat 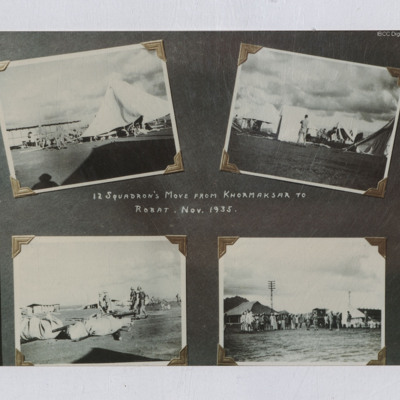 Four photographs from an album. All four images show tents being taken down or erected and various items being moved around. 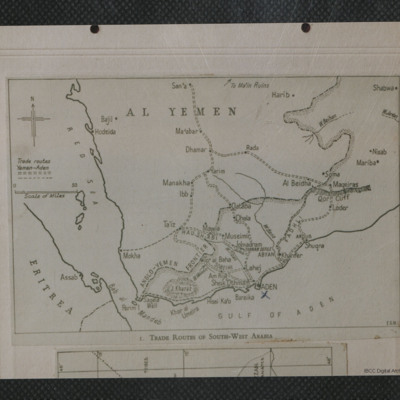 A small scale map of Aden with a small inked cross added. 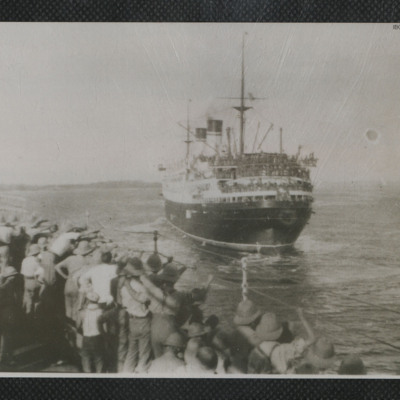 A view of the stern of a passenger ship, two funneled from another ship, 'Cameronia'. It is filled with pith helmeted men. On the reverse 'On board TSS 'Cameronia' Oct 1935. Remember when we stopped in Lake Timsah opposite this Italian Troopship "SS… 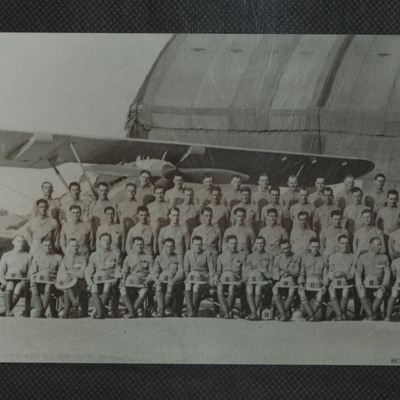 Two images of a group of airmen arranged in four rows in front of a Hawker Hart. On the reverse is 'Taken at Robat 1935. It was a bit ambitious. Panoramic. Oliver is extreme right - second row. You may need a magnifying glass. The Hangar is canvas -… 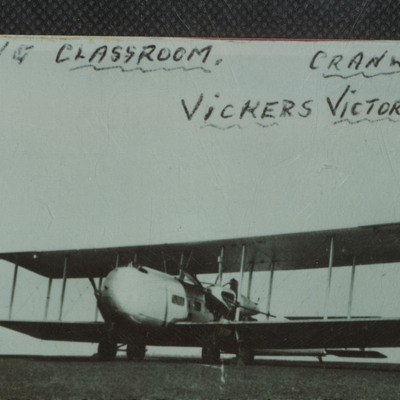 A Vickers Victoria used for teaching and training at Cranwell. 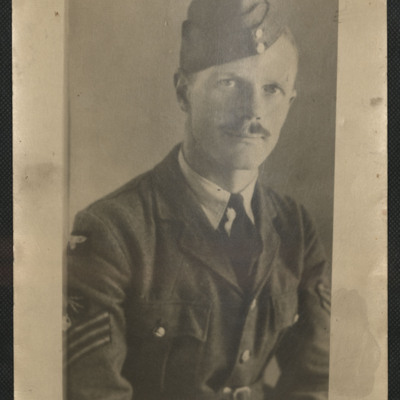 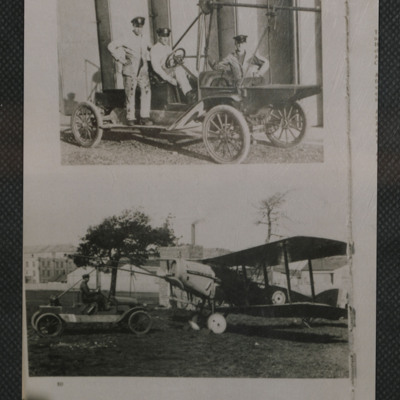 Two photographs of a Hucks starter vehicle. The first is the vehicle with a crew of three. The second is the vehicle linked to the propeller of a Bristol F2B Fighter. On the reverse 'Remember the old Huck starter?' 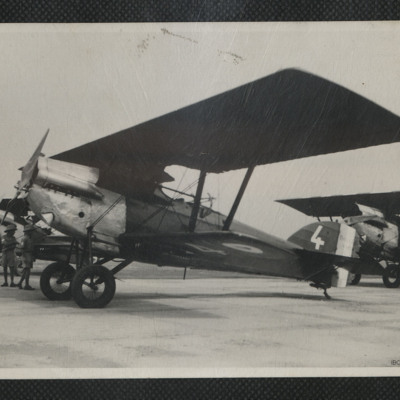 Port side of a biplane with two more behind. On the reverse 'Oliver Bell flew in this aircraft in Aden 1938'. 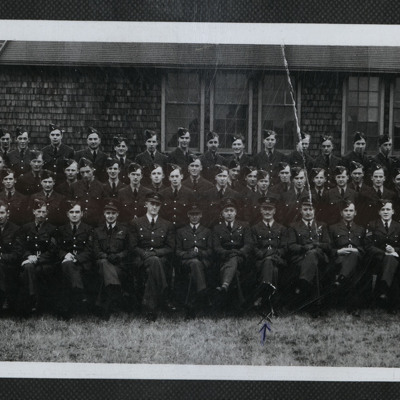 69 men arranged in three rows in front of a wooden building. On the reverse 'Canada 1943'. Joyce and Oliver with six airmen on their wedding day. On the reverse 'Joyce & Oliver Bell Wedding Day May 21 st 1942 Harworth Church'. 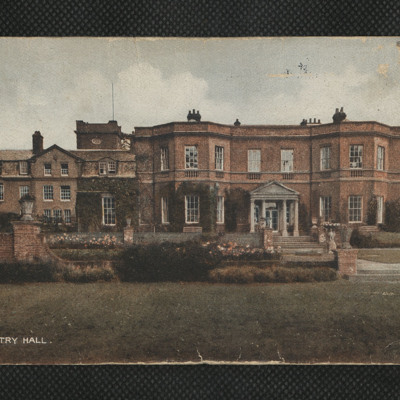 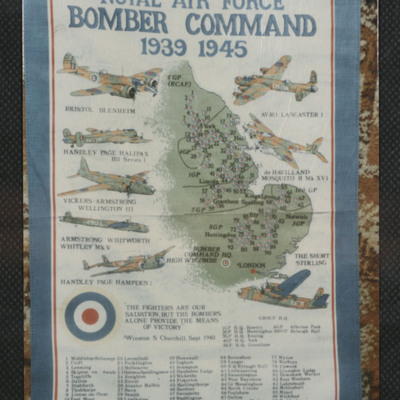 A Tea towel with a sketch map of Eastern England. 93 airfields are numbered and named, the different bombers are depicted and named, the Group headquarters are named and there is a quote from Winston Churchill. 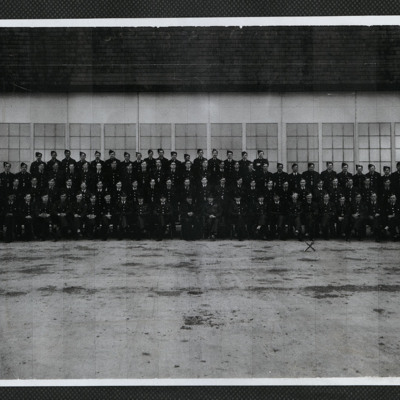 A large group of airmen arranged in four rows inside a hangar. On the reverse 'Nov 1943 (Canada) Warrant Officer Bell'. 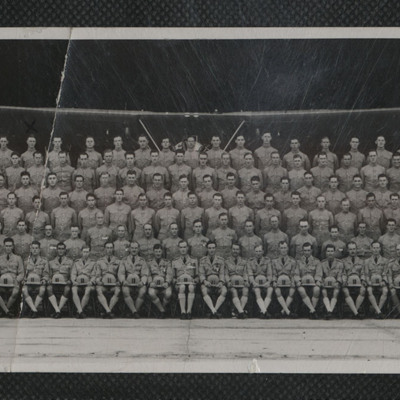 Large group of airmen arranged in six rows in front of a biplane. On the reverse '8(B) Squadron February 1937. eighth from left rear row.' 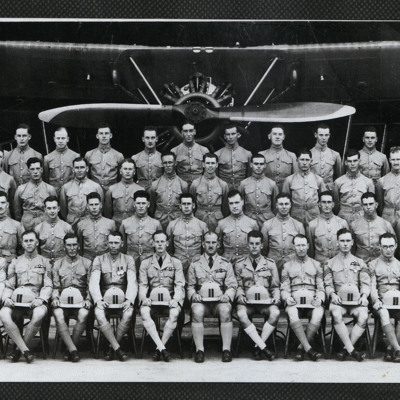 42 men arranged in four rows in front of an aircraft. Oliver has a small cross on his right chest. On the reverse 'Aden'. 20 airmen arranged in four rows. Behind is a biplane. The front row are holding pith helmets. Oliver has a small cross on his left shoulder. On the reverse 'A Flight 8(B) Squadron February 1937 right hand side of rear row'. 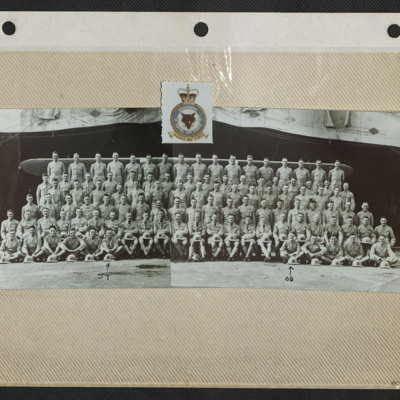