17 items.
The collection has been donated to the IBCC Digital Archive by Barbara Bury and catalogued by Barry Hunter. 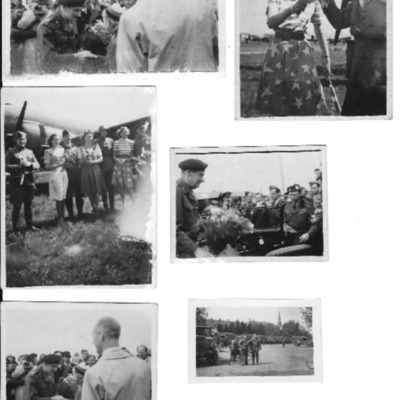 A collection of 21 photographs individually described in Album 3 Denmark

Three Horsa Gliders and a row of Graves 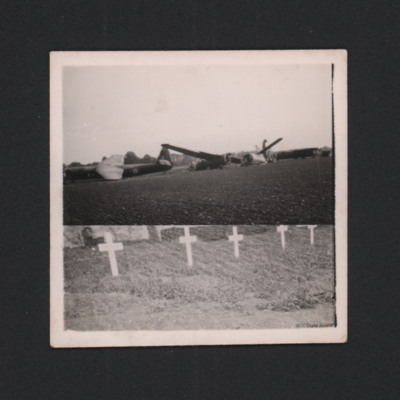 Two photographs combined. The top photographs is of three Horsa gliders, two are intact but the middle one has split in the middle of the fuselage. The lower image is a row of five crosses. 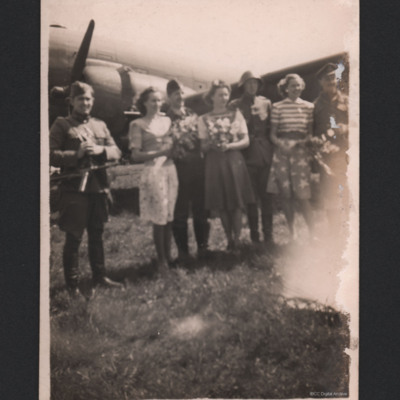 A group containing three soldiers, one airman and three young girls, including the girl dressed in stars and stripes. The girls are holding bunches of flowers. Behind is a C-47.

Colin McDermott and a Gunner 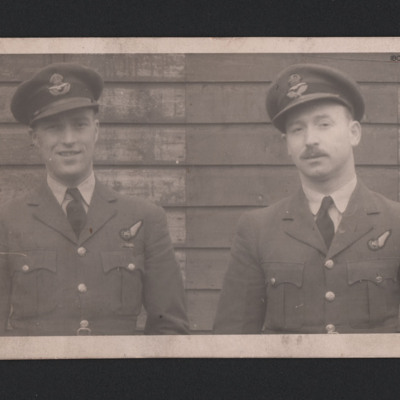 A half length portrait of Colin and an air gunner. They are standing in front of a wooden hut.

Colin McDermott and a Woman 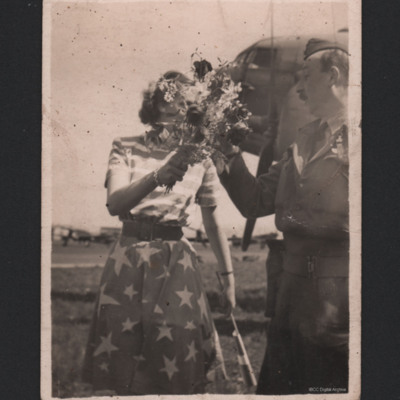 A young woman dressed in a skirt with stars and a top with stripes is partly obscured by a bunch of flowers. In her left hand is a flag. Colin is standing beside her. Behind is the nose of a C-47 and other aircraft. On the reverse is 'My Mac Dermot'.… 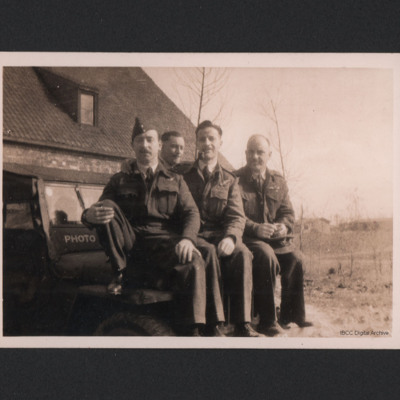 Two photographs with the same men.
Photo 1 is of four airmen, including Colin, seated on a jeep with 'Photo' printed on the front, under the windscreen.
Photo 2 is the same four men sitting on a jeep. In both images there is a brick building… 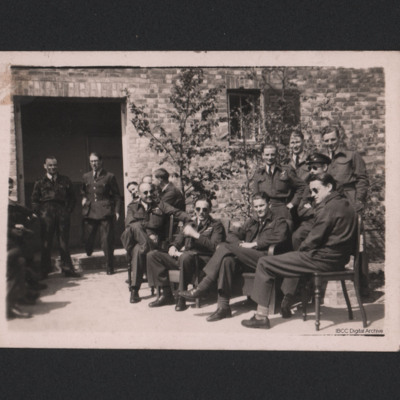 13 airmen, mainly seated in the sun outside a brick building. Three are wearing dark glasses and one is smoking a pipe. 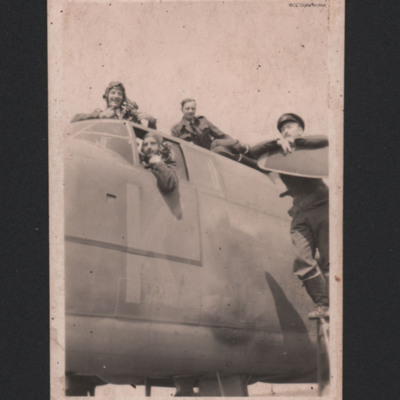 Two photographs with the same group of airmen.
In photo 1 the four airmen are positioned in and on the cockpit of a Mitchel 'K'. The pilot is in his seat, two airmen are lying on the top of the aircraft and Colin is standing on the wing holding… 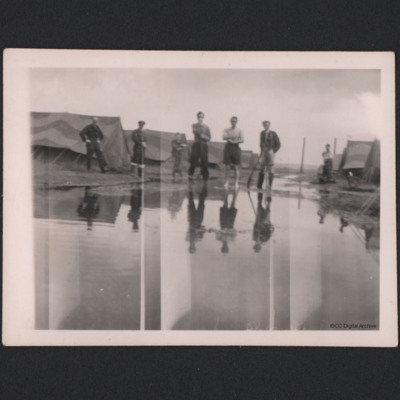 Two rows of tents with a large pool of water in between. Seven airmen are poised, one leaning on a shovel. 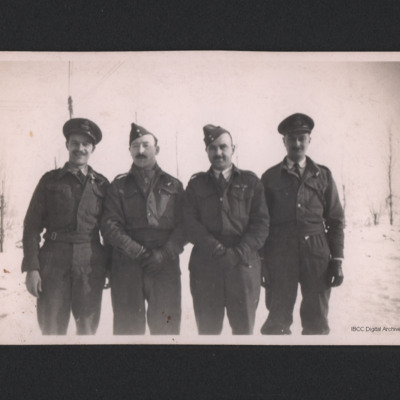 Tree quarter length portrait of the four airmen, including Colin. Behind is a snowy landscape.

Four Airmen and a Mitchell 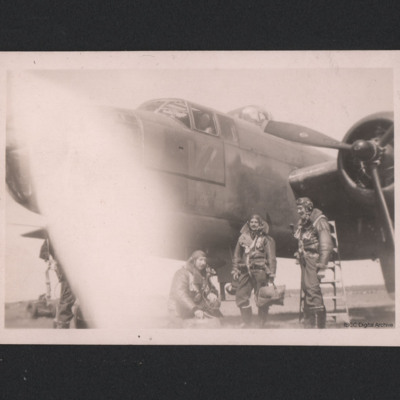 The four airmen are positioned at the front of a Mitchel 'K'. The men are wearing full flying kit. The left side of the image has been damaged by light. 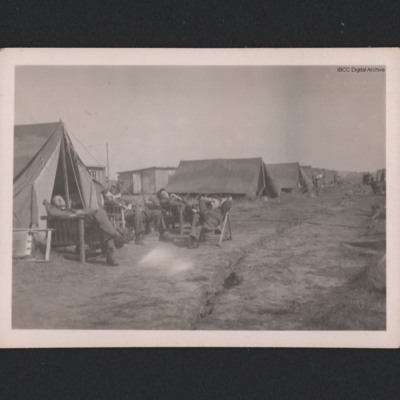 A row of tents with airmen asleep in chairs. In between the tents they have cut a drainage channel.

B-25 Mitchell in Flight 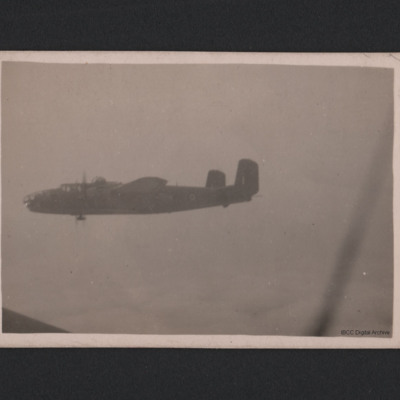 A port side view of a Mitchell in flight. 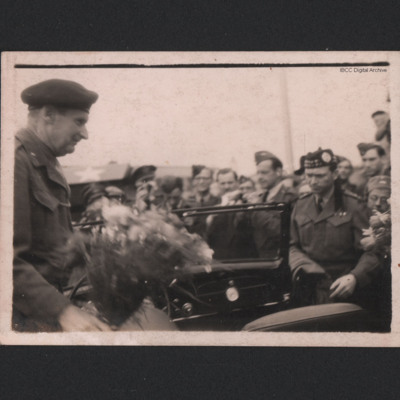 Two photographs of Field Marshall Montgomery.
In photo 1 he has a bunch of flowers and is standing by a jeep. To one side are several soldiers.
In photo 2 he is shaking the hand of a girl whilst holding the flowers in his left hand. Behind is a mix… 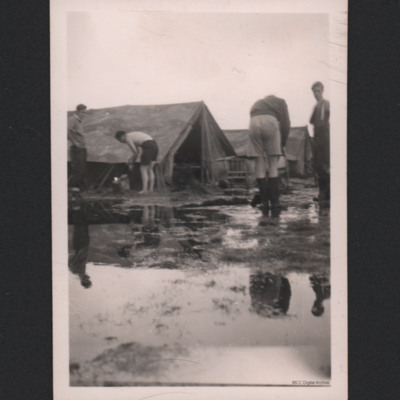 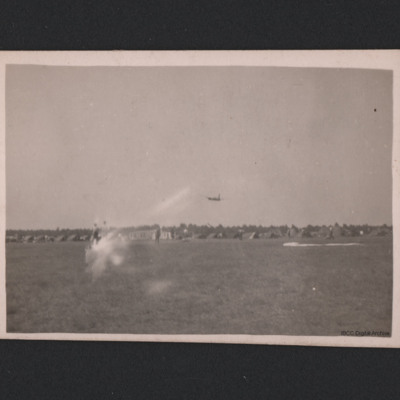 A tented camp with an aircraft overflying. Three men are in the near distance. 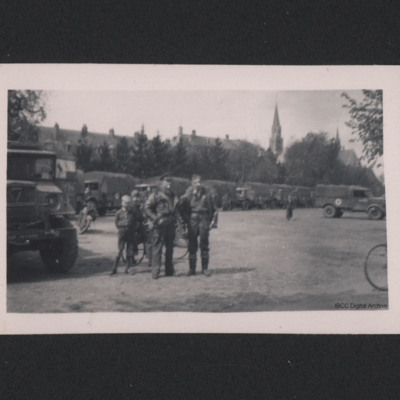 Two airmen standing in a yard, watched by two children. Behind is a convoy of trucks. Further behind is a row of houses and two church steeples.
View all 17 items