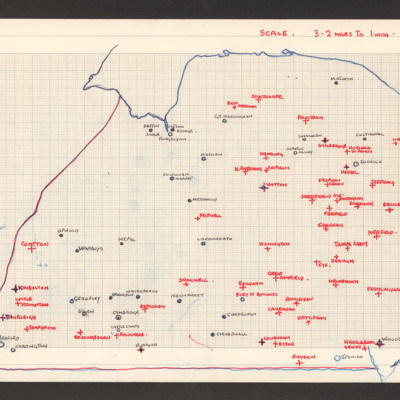 A sketch map of airfields in the south east of England, as far south as Ipswich. It is drawn on graph paper and has a scale of 3.2 miles to 1 inch.

Four Airmen and a Wellington 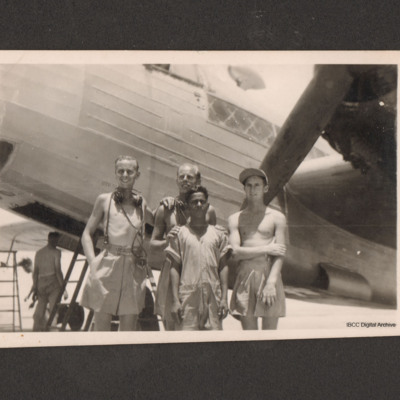 Four airmen under the front of a Wellington. On the reverse 'Graham, Guy, Sparks & 'Chicko' Khormaskar. Aden. April. 1946.'

The 'Charping Chico's' of Four Block 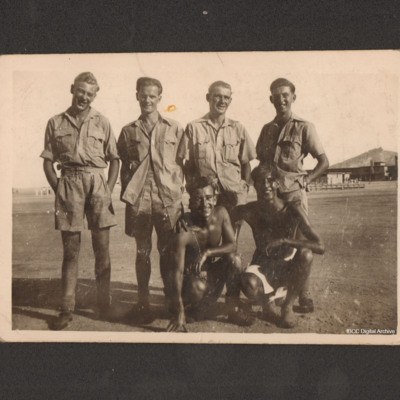 Six airmen, four standing and two crouched in front. On the reverse 'The Charping Chico's of Four Block. Aden. May. 1946'. 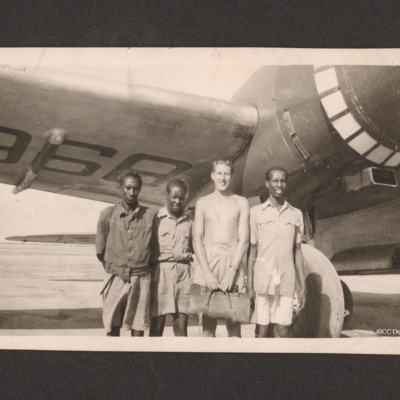 Stan standing with three men. Behind is the wing and engine of a Wellington. 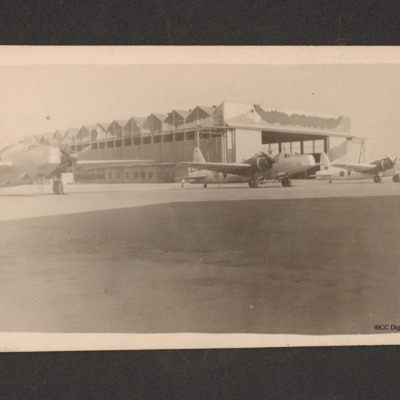 Three Wellingtons parked on an apron infront of a large camouflaged hangar. On the reverse 'Comm. Flight 'Wimpeys' after the COs inspection. 968 nearest the camera. Aden. Aug. 1946.' Three airmen in shorts and hats, standing beside an aircraft jack. On the reverse 'Cramp, Self and Deubert [?], servicing a jack at Bender Cassim. Aug 1946.' 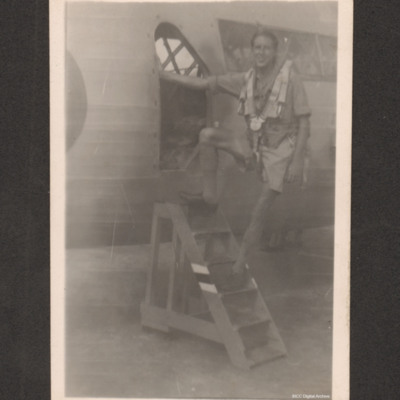 Stan is standing on steps at the rear hatch of a Wellington. On the reverse 'Just before a trip [indecipherable] 46'. 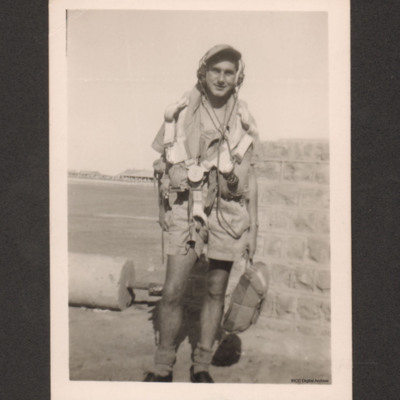 Dave is dressed in shorts and is draped in equipment. On the reverse 'Dave Davey. Fitter on 122. He's a good mate and comes from Peterboro'. 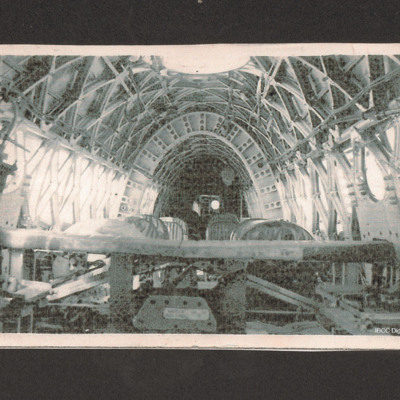 Inside a Wellington showing the geodesic construction. Seats have been added down the fuselage. 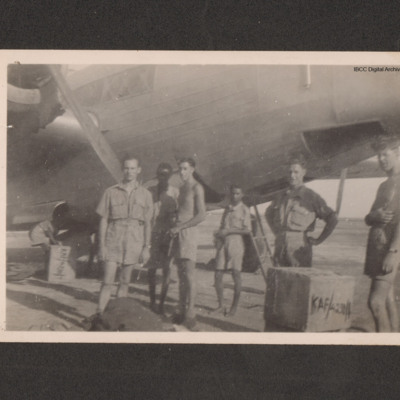 Stan Shaw on a Tractor 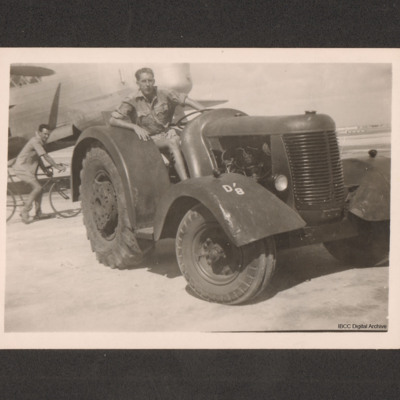 Stan Shaw driving a tractor in front of a Wellington. In the background is a man on a bicycle On the reverse 'U.T. Tractor Driver!! Aden. Jan. 1947'. 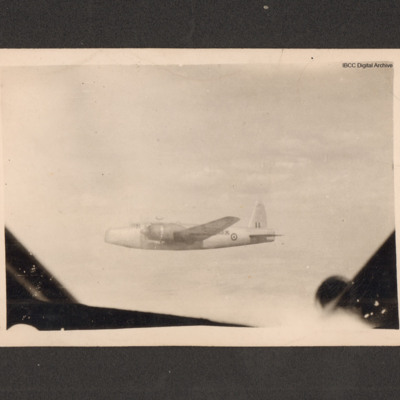 An air-to-air of a Wellington in flight. On the reverse 'Snap of 423 Wimp, taken in flight, on return from Mog to Khormaskar'. 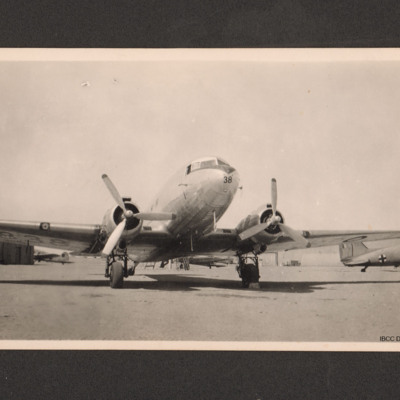 Two Dakotas, one with '38' on the nose, the other with an ambulance badge on the rear fuselage. On the reverse 'S.A.A.F. Dakota, on the Transport Flight dispersal. Fayid. May. 1947'. 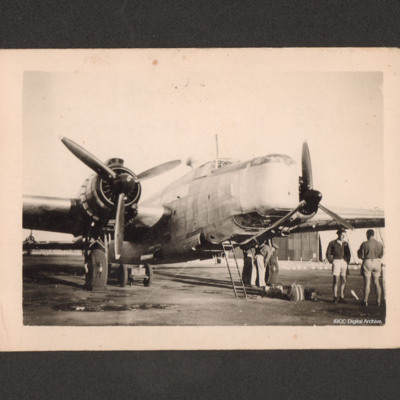 A front view of a Wellington. Two ground crew are examining a damaged port tyre. The starboard tyre also appears to be damaged. Two other men are engaged in a discussion.
On the reverse '775 having pre-flight befor [sic] leaving Asmara, Eritrea.… 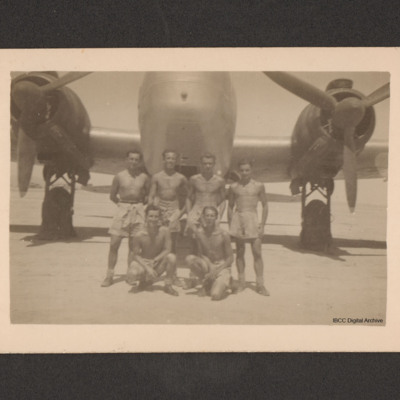 Six airmen arranged at the front of an aircraft. Four are standing and two are crouched. 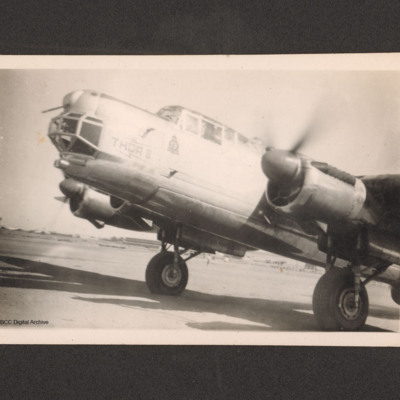 Lincoln Thor II with engines running. On the reverse 'Lincoln. Thor II. arrives at Fayid. May 1947'. 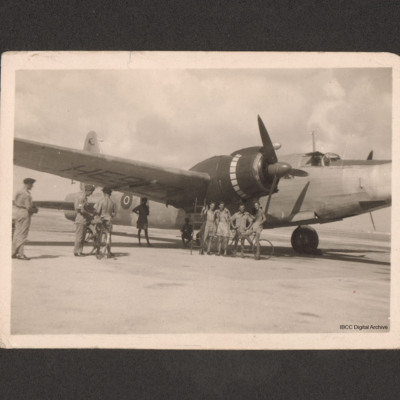 Wellington HE968, starboard side, on the ground. Nine ground crew are underneath. 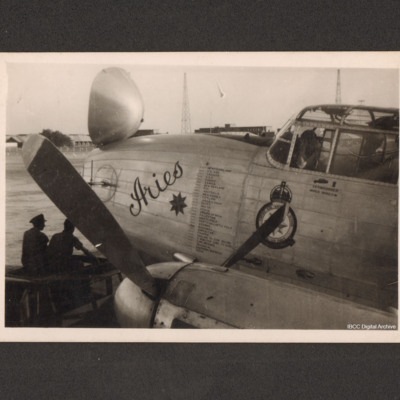 The nose of Lancaster 'Aries' with the front lifted up for maintenance. Two ground crew can be seen working under the nose. On the nose is painted 'Aries' and a list of locations the aircraft had been flown to.
On the reverse 'Cockpit and nose of… 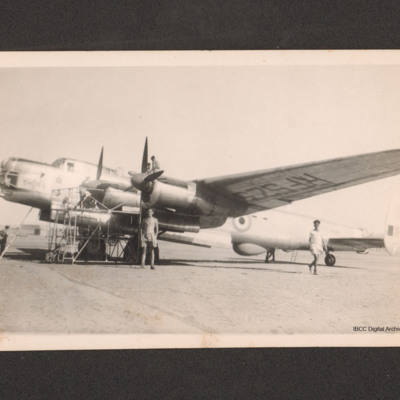 A port side view of a Lincoln on the ground with an access frame at the port inner engine. On the reverse 'Lincoln Thor II being serviced by "C" shift. May. 1947'. 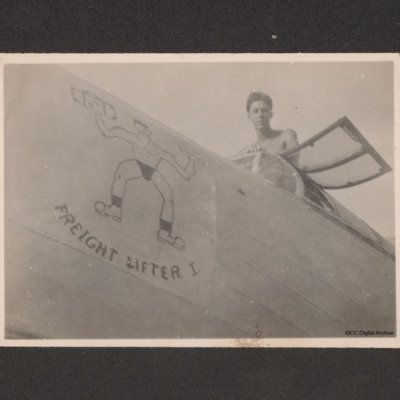 An airman standing in the cockpit of a Lincoln, with the hatch open. On the nose is painted a weightlifter with something heavy in his hands and 'Freight Lifter I'.
There is a second image with another airman at the top of the cockpit. 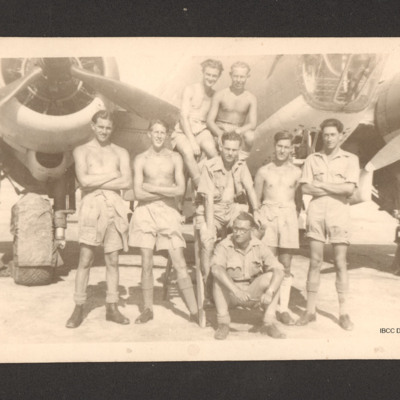 Eight airmen in shorts, all but three are topless. They are grouped under the port wing of an aircraft, standing and on a ladder. 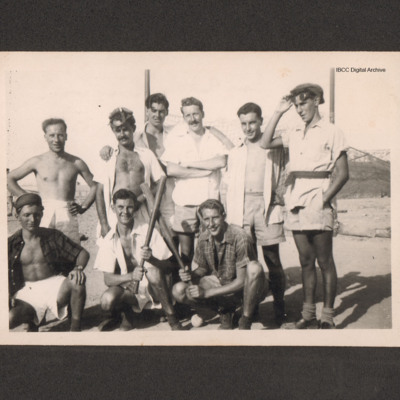 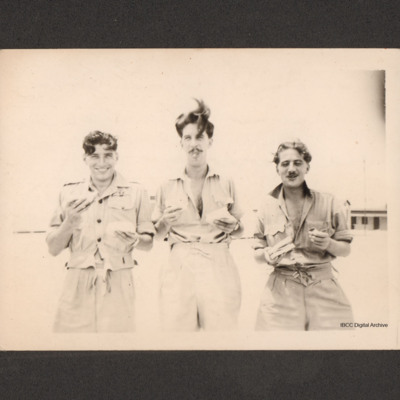 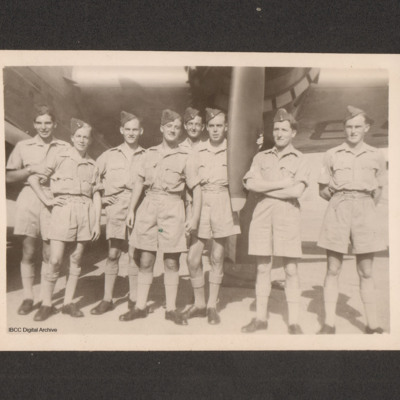 Eight men arranged in a line under an aircraft engine. On the reverse 'Ground-crew & air crew after the C/Os inspection of Comm. Flight. Aden Aug.1946'. 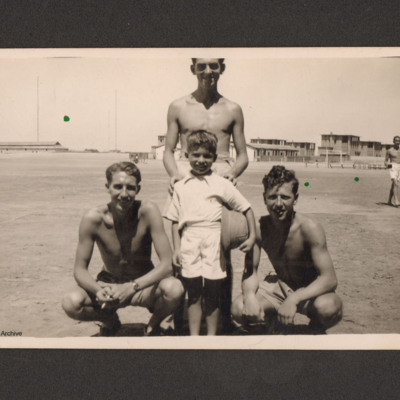 Three airmen and a boy carrying a pith helmet. In the distance a fourth man carrying a cup. On the reverse 'Geordie, Johnnie, Pete and Self. Jock Frazer in background with Chai. Aden. Sept. 1946.'
View all 46 items