Photographs of Philip Hopgood's family and friends and then his training in Canada and Great Britain. 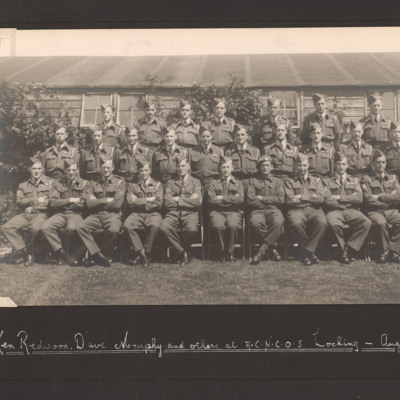 28 airmen arranged in three rows in front of a wooden hut, captioned 'Ken Redwood, Dave Murphy and others at A.C.N.C.O.S. Locking - August 1945'. 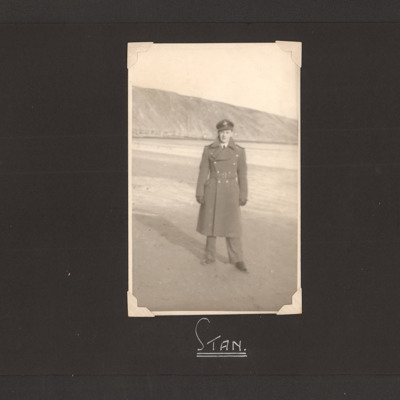 An airman in greatcoat, standing on a beach, captioned 'Stan'.

Eight photographs from an album page.
Captioned 'Ken, Philip & Self'. The images are of the three named men in various poses.

Three photographs from an album.
Photo 1 is of six people, captioned 'Self, Joan, David, Mum, Aunt May & Dad'.
Photo 2 is of Philip Hopgood with his friend sitting on a metal fence, captioned 'Joan & Self'.
Photo 3 is a snow scene, captioned 'St… 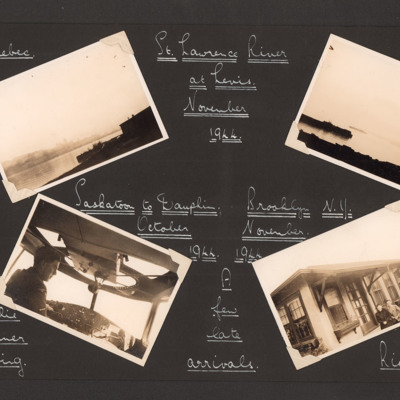 Four photographs on an album page.
Photos 1 and 2 are a sunset, captioned 'St Lawrence River at Levis November 1944' and 'Quebec Sunset'.
Photo 3 is a pilot in the cockpit of an aircraft, captioned 'Saskatoon to Dauphin October 1944, Charlie… 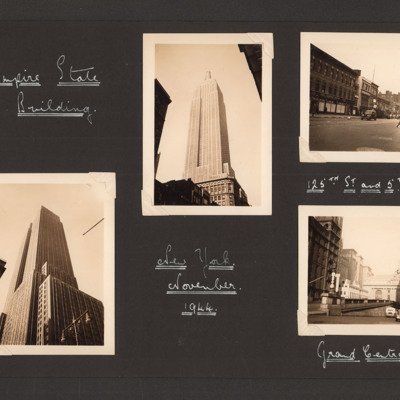 30 photographs on 8 pages of an album.
Page 34:
Photo 1 and 3 are views of a skyscraper captioned 'Empire State Building'
Photo 2 is a street scene, captioned 125th and 5th Ave Harlem'.
Photo 4 is buildings, captioned 'Grand Central… 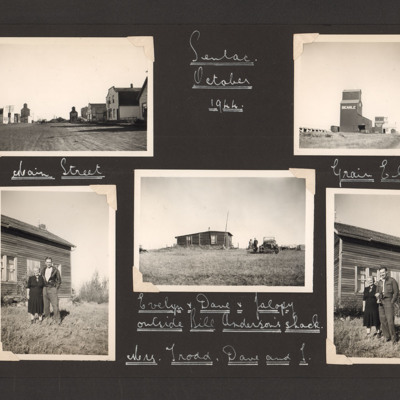 Ten photographs from two album pages:
Page 32:
Photo 1 is a street scene, captioned 'Main Street'.
Photo 2 is of several grain elevators, captioned 'Grain Elevators'. Nearest one has 'Searle' on outside.
Photo 3 and 5 are of a woman and two… 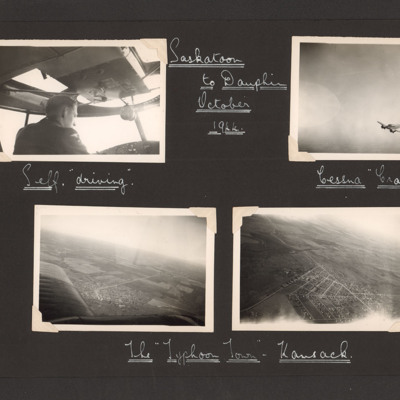 Eight photographs from two pages of an album.
Page 28:
Photo 1 is an airman in the cockpit of an aircraft, captioned 'Self "driving" '.
Photo 2 is an air to air shot of a Cessna Crane, captioned 'Cessna Crane'.
Photo 3 and 4 are aerial views of a… 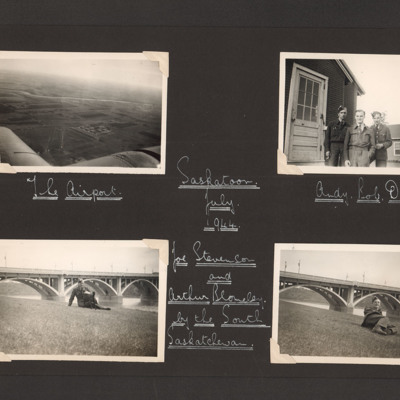 Four photographs from an album.
Photo 1 is an oblique aerial view of the airport, captioned 'The Airport'.
Photo 2 is three airmen standing outside a wooden building, captioned 'Andy, Bob, Dave'.
Photo 3 and 4 are two different airmen sitting on… 26 airmen arranged in three rows in front of an Anson. [or Cessna Crane] It is captioned 'Course 106 Red Section Saskatoon E & F Flights No 4 SFTS August 1944'. It is further captioned with the names of all present. 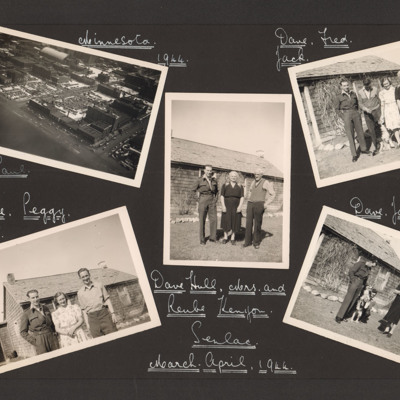 Eight photographs from an album (pages 22 and 23).
Page 22 (entitled Prince Albert March 1944):
Photo 1 and 3 are an airman and a woman by the side of a river, captioned 'Andy Donaldson and Lorna on the bank of the Nouth Saskatchewan River'.
Photo… 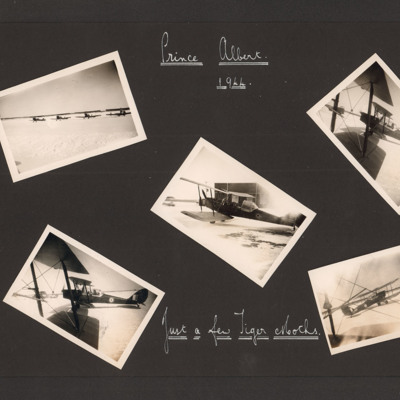 Five photographs of Tiger Moths in the snow, captioned 'Just a few Tiger Moths'. They are fitted with canopies for use in cold climates. 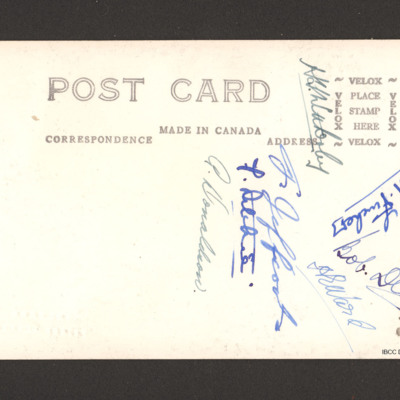 A post card (printed 'made in Canada') with eight signatures.

29 airmen (all but one trainees) arranged in three rows in front of a Tiger Moth. The ground is snow covered. Underneath all 29 are named. 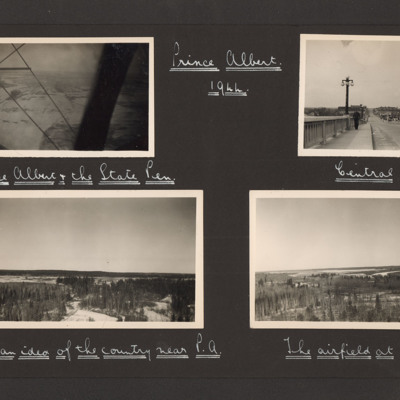 Four photographs on an album page.
Photo 1 - an aerial view of a town, captioned 'Prince Albert & the State Pen'.
Photo 2 - a street scene across a bridge, captioned 'Central Ave'.
Photo 3 - a landscape view, captioned 'Just an idea of the country…

Four photographs on an album page.
Photo 1 - a view looking down to a lake, captioned 'More Lake Superior'.
Photo 2 - looking across a frozen river, captioned 'Quebec City. Taken across the frozen St Lawrence from Levis'.
Photo 3 - a wide river…

Lake Superior from the train 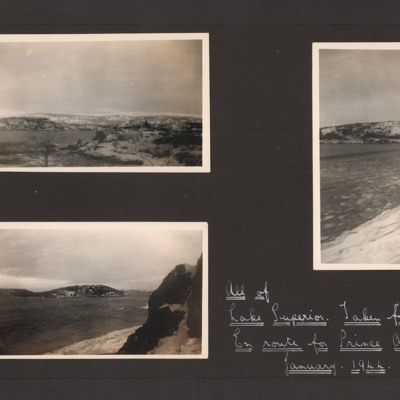 Three photographs on an album page.
The three images show rocky terrain and the lake, captioned 'All of Lake Superior. Taken from the train. En route for Prince Albert, January 1944'. 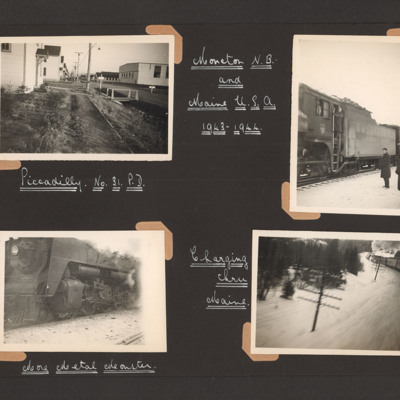 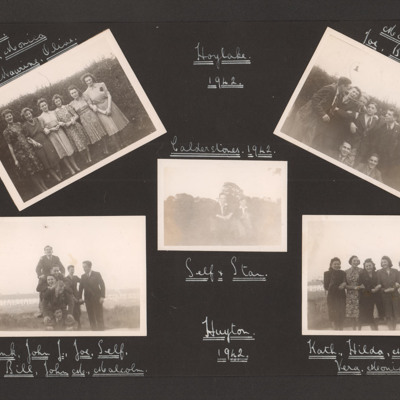 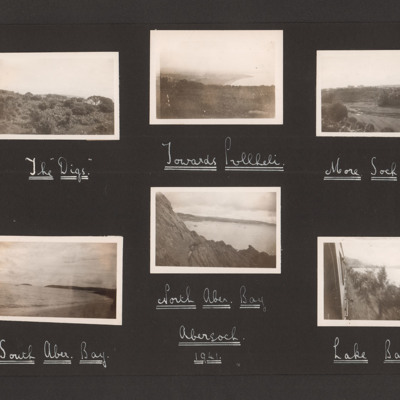 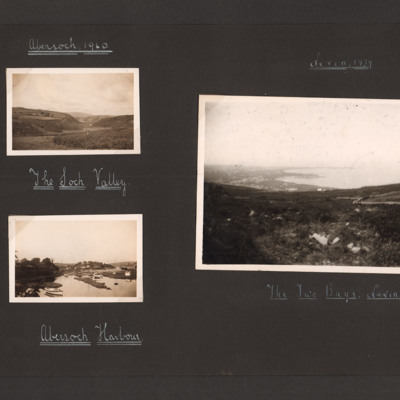 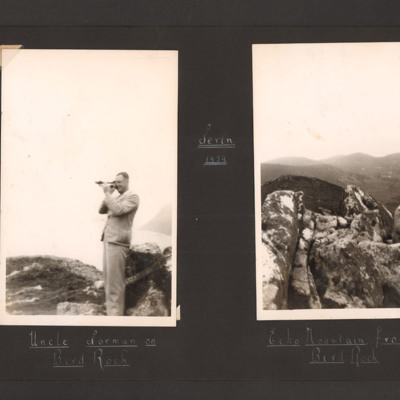