Scrapbook containing 66 photographs taken during his training in Great Britain and Canada, and with 623 Squadron.

The collection has been donated to the IBCC Digital Archive by Harry Wilkins and catalogued by Barry Hunter. 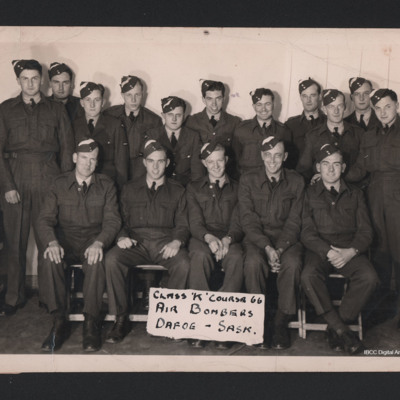 16 airmen arranged in two rows. They are trainees and are wearing sidecaps with white flashes. They have a sign with 'Class 'K' Course 66 Air Bombers Dafoe - Sask.' On the reverse is written 'November 1942'.

Six airmen in the snow 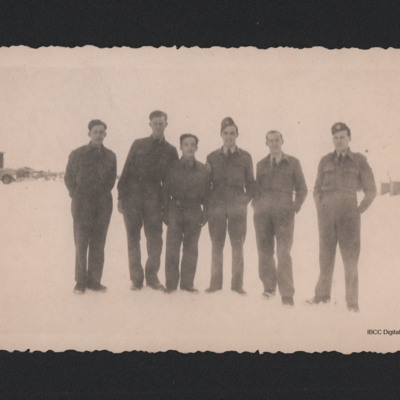 A line of six airmen standing in the snow. Behind are buildings and trucks. 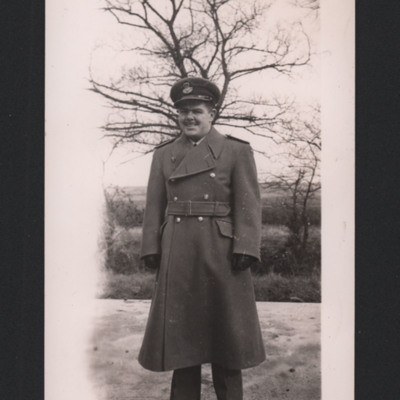 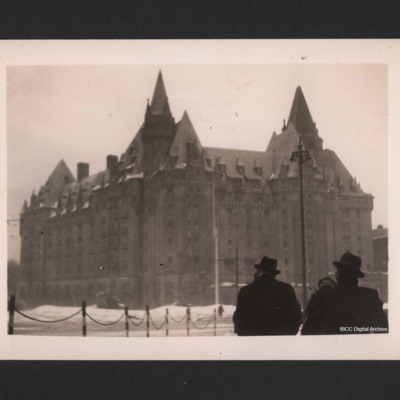 A large building, six storeys high, complete with dormer windows in the roof. In the foreground are three men in hats facing away from the camera. There is snow on the ground but the road has been cleared. 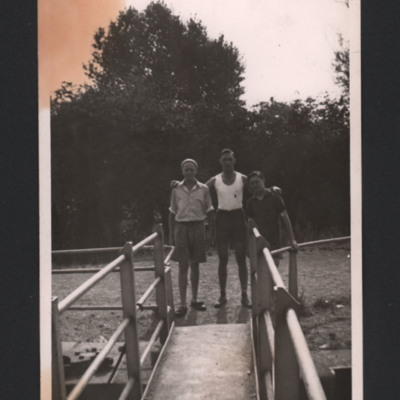 Three men in shorts, standing at the end of a footbridge 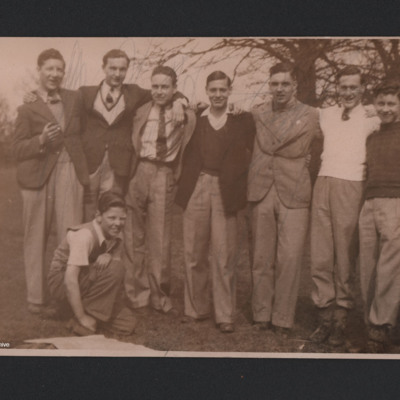 Seven men in a row with arms around each others shoulders. On the left a boy is crouched down. 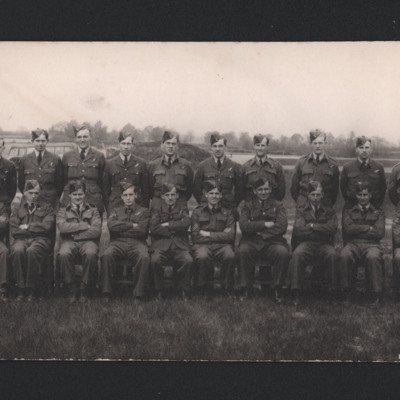 20 airmen arranged in two rows. The front row is seated with their arms folded. Behind is a bus. The second photograph is identical. 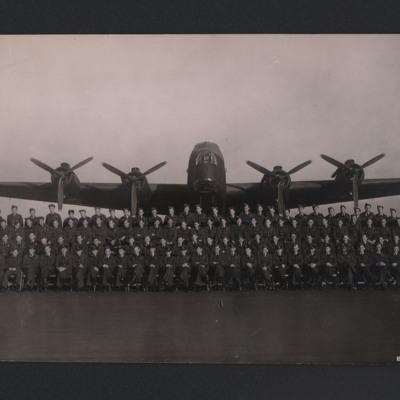 Four rows of airmen arranged in front of a Short Stirling bomber. On the reverse '623 Squadron Downham Market. November 1943'. 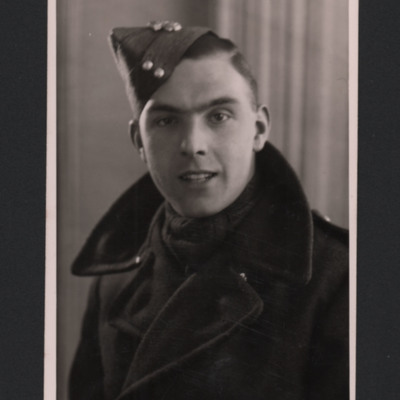 Head and shoulders portrait of David Geach. He is wearing a sidecap, greatcoat and a scarf. On the reverse is written 'David Geach' and is stamped '14 May 1941'.

Len McCann and an airman 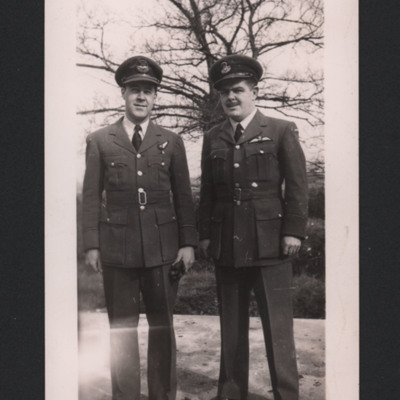 Len McCann and an airman with a navigator brevet standing outside in winter. Behind is a leafless tree. 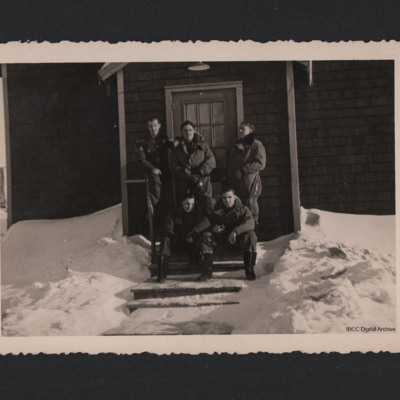 Five airmen outside a wooden building. Two are sitting on the steps with the other three behind. The ground is covered in snow but the steps have been partly cleared. 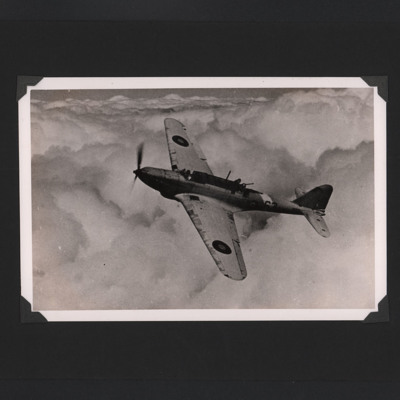 Air-to-air image of a Battle in flight above the clouds. 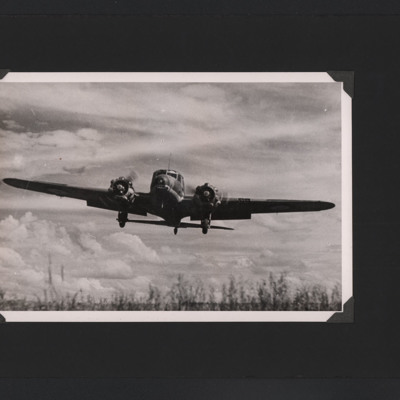 An Avro Anson landing, taken from the front. 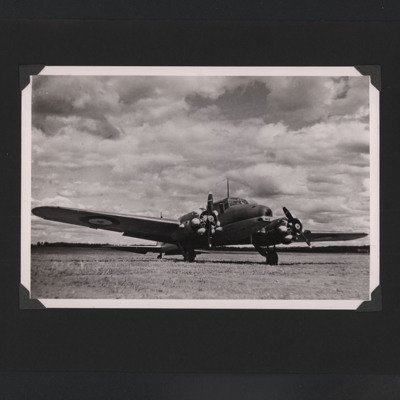 An Avro Anson image taken from the front/side. 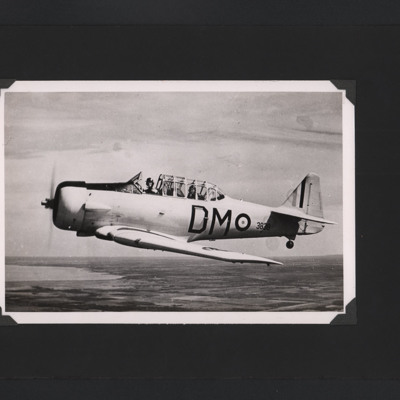 An air-to-air view of a North American Harvard, RCAF 3838, 'DM' in flight, taken from the side. 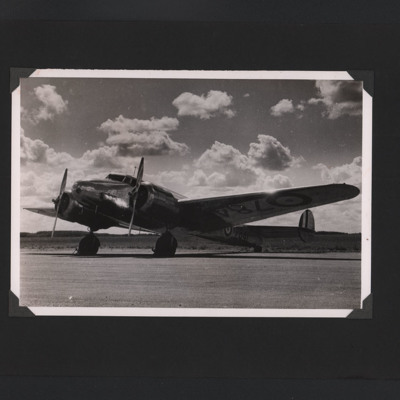 Lockheed Electra, RCAF 7841, taken from the side. This aircraft crashed on 26th January 1942 with seven fatalities. 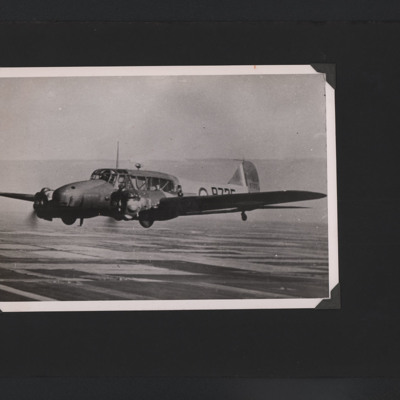 An air-to-air view of Avro Anson, 9725, in flight over prairies. 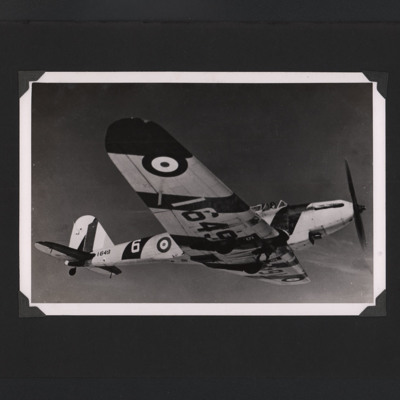 An air-to-air view of Fairey Battle, 1649, in flight. This aircraft was used as a target tug and was painted yellow and black. It was involved in a fatal crash in 1940. 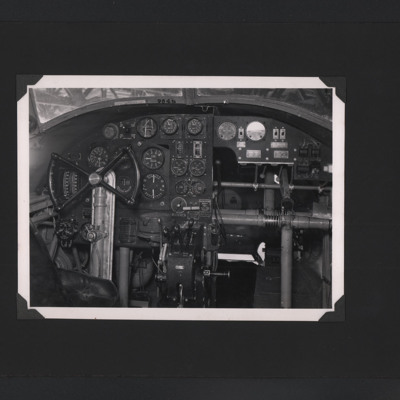 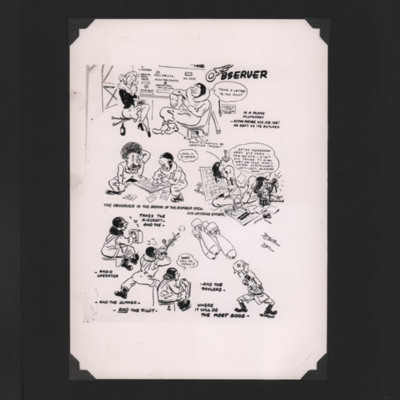 A series of cartoons starring the Observer as the leader of the bomber crew. 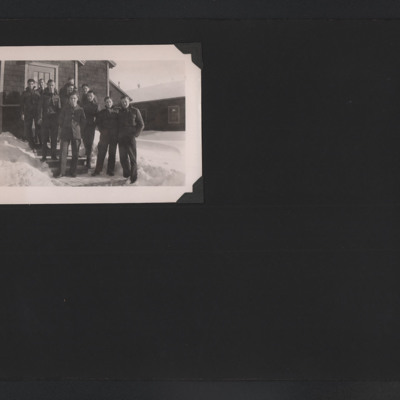 A group of 11 airmen standing on the steps in front of a wooden building. The ground is covered in snow apart from the steps which have been cleared. 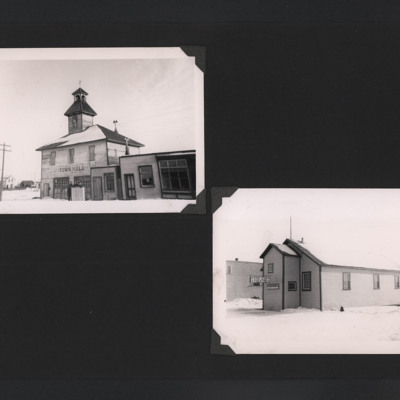 Photo 1 is a few buildings, the largest having a Town Hall sign on the front. The ground is snow covered.

Photo 2 is a small wooden building with a sign 'Four Star Theatre'. The ground is snow covered.

Airmen on a pickup and a snow scene 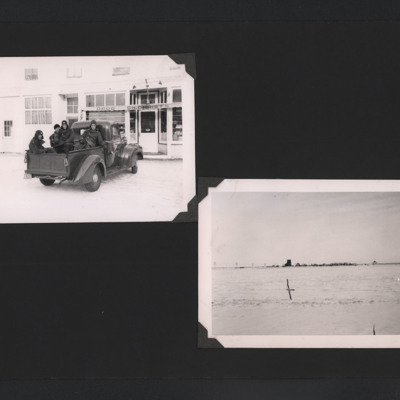 Photo 1 is a group of four airmen on the back of a pick up truck. Behind is a chemist store.

Photo 2 is a snow scene. In the foreground is a wooden cross and in the background are some buildings. and a telegraph line. 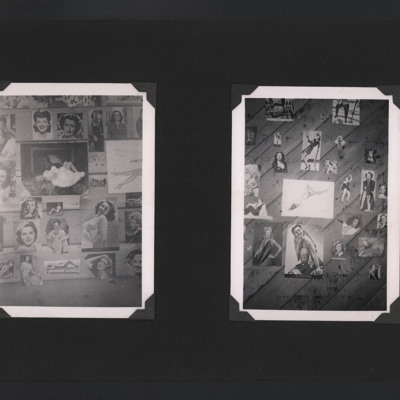 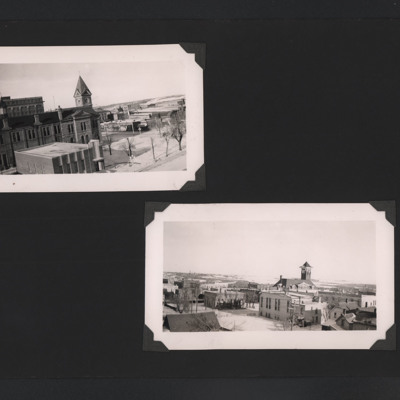 Photo 1 and 2 are street scenes taken from a raised elevation. There are no people or cars on the images.