30 items. An album of photographs taken during Ted Neale's service in the Mediterranean theatre. Formation of B-25 Mitchells 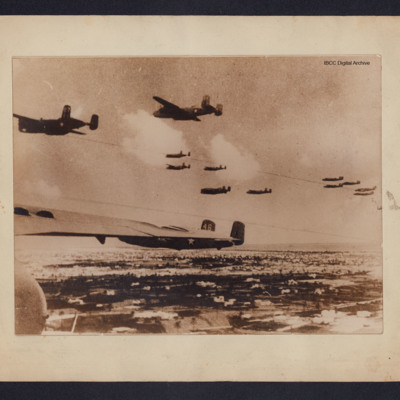 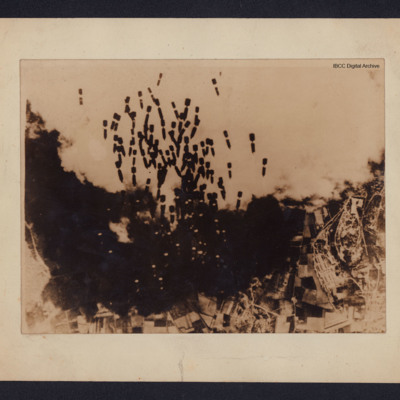 A vertical aerial photograph showing multiple bombs being dropped. The ground is mostly obscured by cloud and explosions. A the bottom of the image are fields and buildings. 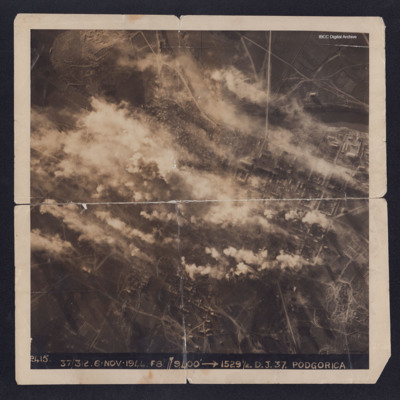 A target photograph taken during an operation to Podgorica. Half of the image is obscured by explosions and smoke. The river and the grid pattern of streets and buildings can be clearly seen. On the reverse is captioned 'With compliments from 336… 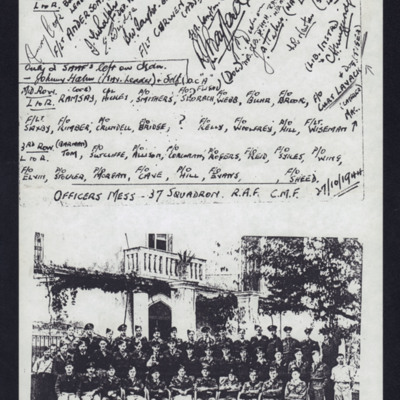 A group of airmen arranged in three rows outside the Officers' Mess. On the top of the sheet some of the individuals are named and some of their signatures have been added.

A Flight Aircrew and Groundcrew 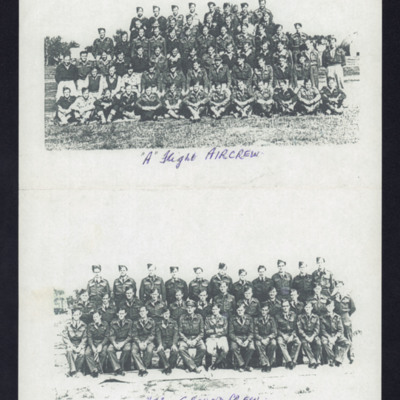 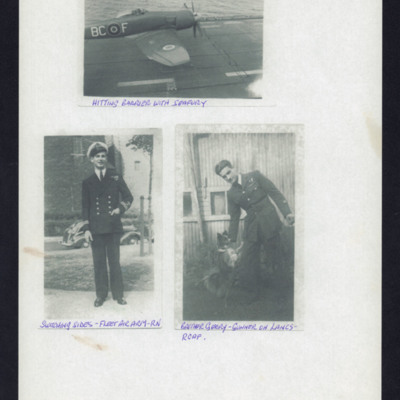 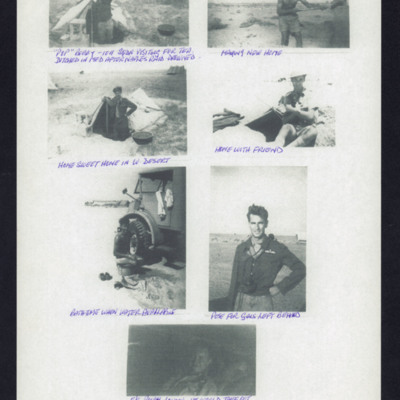 1. An airman outside a tent with a billy can, captioned '"Pop" Bobby - 104 Sqdn visiting for tea. Ditched in Med after Naples Raid. Drowned'.
2. Airman in shorts digging, captioned 'Making a new home'.
3. Airman standing at the entrance to his…

Inside an airman's hut 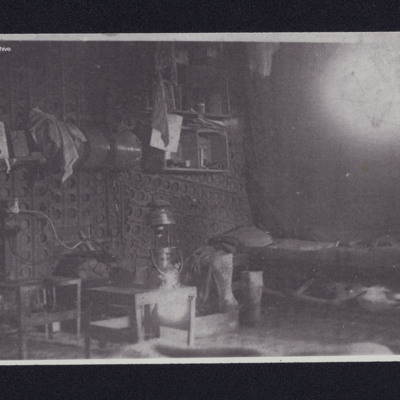 A bed, chairs and tables making up the accommodation for airmen in the desert. The walls are made of steel planking.. There is a hurricane lamp on a table. 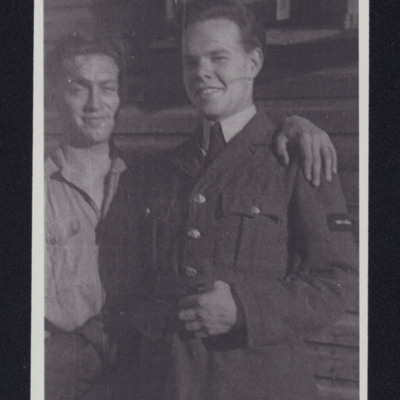 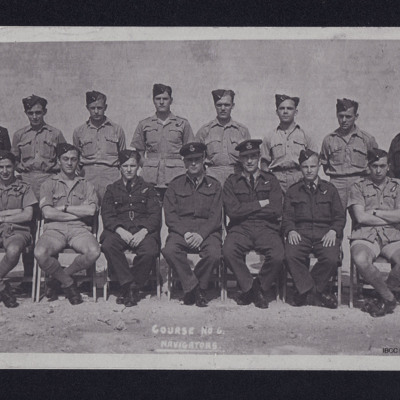 15 airmen grouped in two rows. Nine airmen are wearing desert uniform. Six are wearing standard uniform. It is taken in desert terrain. It is captioned 'Course No 6 Navigators'. 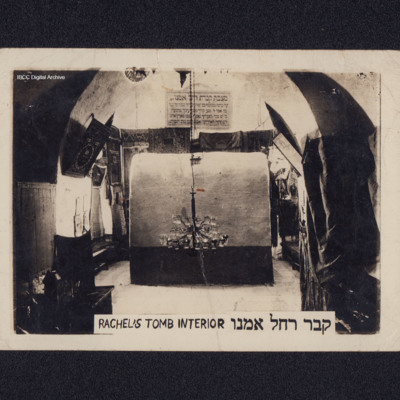 Site near Bethlehem with caption 'Rachel's Tomb' in English and Hebrew. 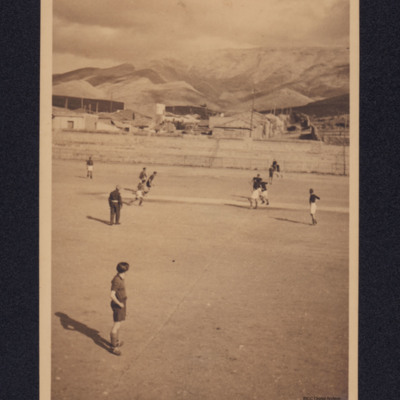 A group of eleven men playing football, watched by a referee in full uniform and flat cap and man in football kit. On the reverse 'Football in the shadow of Mt."Imetos" ' 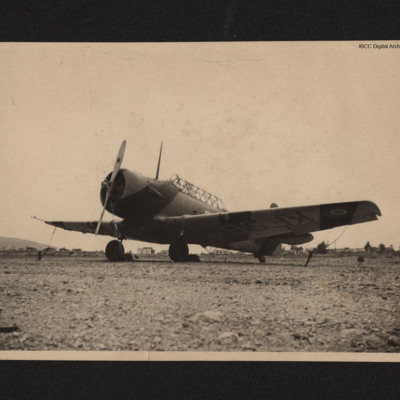 Harvard, KF98[?], tied down and chocked on a gravel airfield. On the reverse 'A Harvard'. 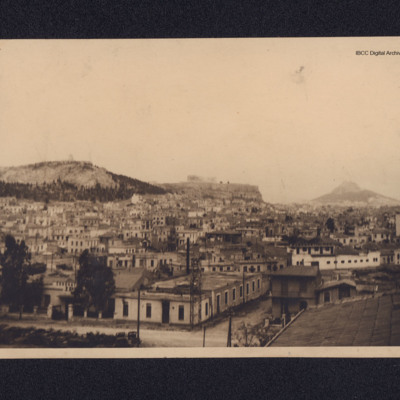 A roof top view of Athens with low houses. In the background are low hills and the Parthenon. 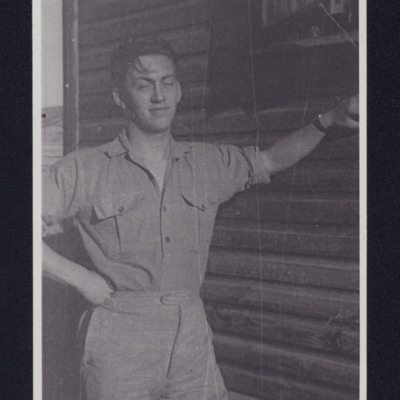 Three quarter length portrait of an airman with his left arm resting on a wooden building. He is wearing desert uniform and is squinting in the sun. 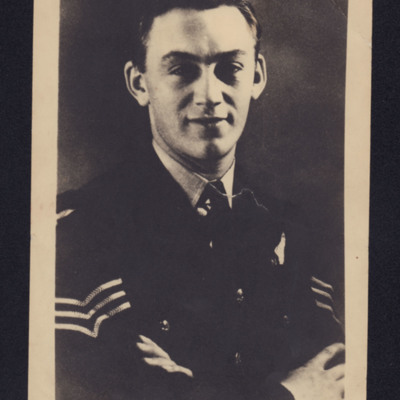 Half length portrait of a sergeant with a Navigator's brevet.

Sergeant in the Mess 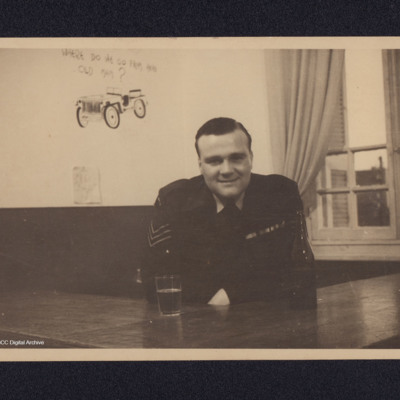 A sergeant in uniorm, drinking a beer. He is seated at a table. Window of room has external shutters. On the wall is written 'Where do we go from here, Old Boy?' and a sketch of a Jeep. On the reverse 'Our dearest friend, Uncle Alec'. 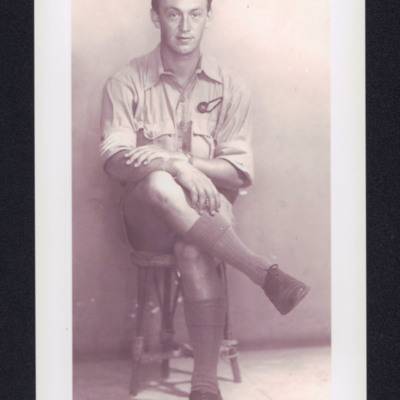 A man, in desert uniform, sitting on a chair. He has a Navigator's brevet.

Five men and a tent 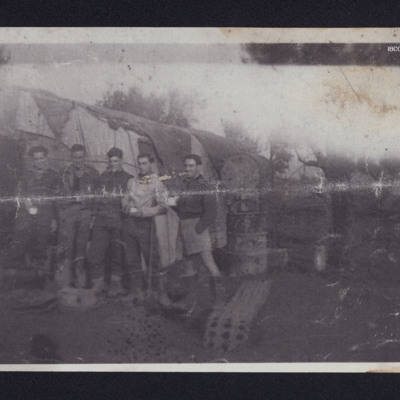 A group of five men casually dressed, standing with mugs, in front of a large frame tent. They are wearing boots and ground appears muddy. There are several oil drums at side of tent. Trees in background. 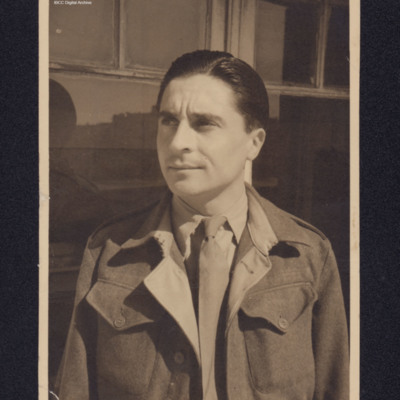 Half-length portrait of an airman. 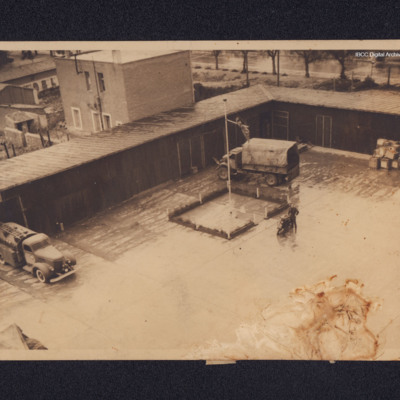 A view from roof height looking down on a yard with two small trucks, a cordoned off flag pole and a man with a motorbike. On the reverse 'Yes, that really is me.' 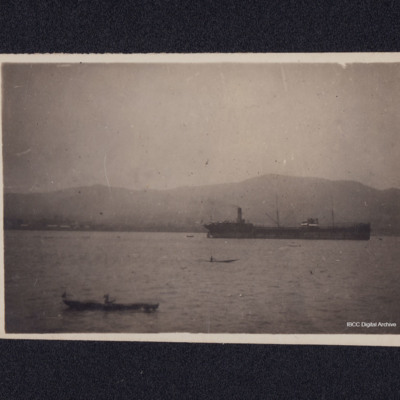 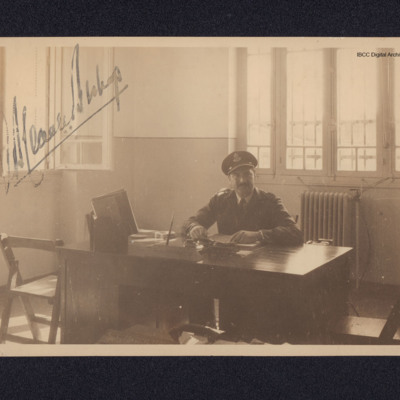 An officer seated, in uniform, at desk. It is signed [undecipherable] Bishop. 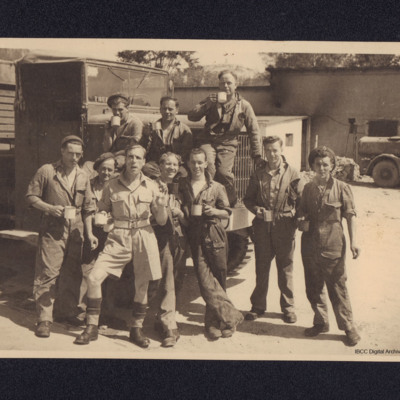 A group of ten mechanics in front of and sitting on a truck. One man is dressed in shorts and shirt, the rest are in boiler suits. All are holding mugs. Three are sitting on the front of a truck. Behind is a bowser.
View all 30 items