This content is available under a CC BY-NC 4.0 International license (Creative Commons Attribution-NonCommercial 4.0). It has been published ‘as is’ and may contain inaccuracies or culturally inappropriate references that do not necessarily reflect the official policy or position of the University of Lincoln or the International Bomber Command Centre. Some items have not been published in order to protect the privacy of third parties, to comply with intellectual property regulations, or have been assessed as medium or low priority according to the IBCC Digital Archive collection policy and will therefore be published at a later stage. For more information, visit https://creativecommons.org/licenses/by-nc/4.0/ and https://ibccdigitalarchive.lincoln.ac.uk/omeka/legal, https://ibccdigitalarchive.lincoln.ac.uk/omeka/collection-policy.
The collection has been loaned to the IBCC Digital Archive for digitisation by [name of the lender] and catalogued by [name of the cataloguer].

John Tait was prompted to join the Royal Air Force, as he was American by birth and therefore he had to report to the police station once a month because he was considered an ‘alien’. He was a wireless operator and gunner, flying in Ansons,… 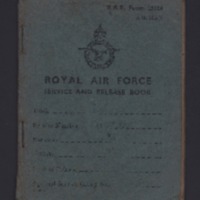 John Tait with a man and woman

Three people in a garden in front of a bungalow. Sergeant John Tait is on the on left holding a cigarette; and older bearded man is on the right, and elderly lady is seated between them.

John Tait in front of a bungalow with an officer 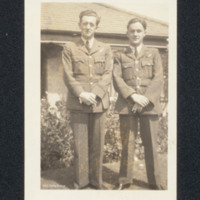 Sergeant John Tait, standing in garden in front of a bungalow. At the left hand side, a flying officer with an observer’s brevet. Both are smoking cigarettes. 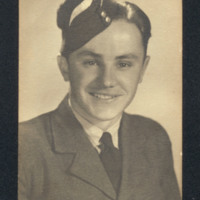 Seven personnel in front of an aircraft 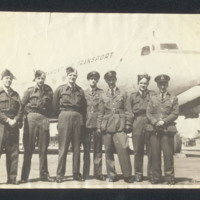 Seven aircrew personnel of various ranks stood in front of a Government Air Transport aircraft. Four are wearing side caps and three dress caps. John Tait is the second from the right.
View all 6 items